I was busy with life when George Floyd died in police custody in Minneapolis, so I have not been closely following it.  Notice I did not say the police killed Floyd, because there is a very great deal we don’t know about this case, which is true in virtually any criminal case.  I’ve often written in analyzing such cases, because I don’t have access to every report, I must rely on news accounts and my police experience to piece together what happened.  When verifiable news contradicts any inference I make, I update accordingly.  So it will be in this case.

I vividly remember seeing the Rodney King video. I had no idea what took place before or after the video clip—and it wouldn’t matter—I thought: those cops are toast.  I thought the same thing when I saw the Floyd video, for two reasons: (1) the officers appeared to be using excessive force—as it is said today, the optics were bad; (2) the arrestee was black, the officers, white.

There seems little doubt the ex-MPD officers involved had some role in Floyd’s death, however, it also seems his fragile medical condition contributed significantly.  In other words, another man being similarly restrained, but without Floyd’s medical problems, would likely have survived.  In any case, the invaluable Andrew McCarthy has a summary of what we do and don’t know.

What is not well known is a familiar cast of unsavory characters is involved in this case.  Take for instance, Benjamin Crump, a Black attorney—not an attorney who happens to be Black—is representing Floyd’s family, as he did the family of Trayvon Martin, Michael Brown, and others.  In every prior instance, Crump made a fortune on settlements, and is obviously angling to do the same here.  Minneapolis will be only too happy to comply.

Minnesota Attorney General Keith Ellison has assumed prosecution of the case.  The worst kind of political partisan/hack, his presence will not contribute to the pursuit of justice.  And the apple, in Ellison’s case, has not fallen far from the tree:

Floyd’s death is surely an injustice, and the officers involved have been fired.  At least one has been charged with some iteration of the Minnesota murder statutes.  The whole of the Democrat Minnesota/Minneapolis D/S/C establishment is crying for the blood of the officers, and will surely handsomely reward Crump.  By any measure, the system has thus far worked, and with unusual rapidity.  Not only were the officers almost immediately fired, felony charges were immediately brought, President trump immediately said the right things and the DOJ immediately began a civil rights investigation.

But that’s not enough.  The usual unholy alliance of D/S/C politicians, the media, Antifa, BLM and every other race baiter and hustler extant has latched onto Floyd as yet another holy Black social justice martyr, a symbol of whatever they’re currently pushing, including the usual list of eternal grievances.  It begins, of course, with seeking social justice through arson, assault, murder, destruction of property, and of course, the most important social justice practice of helping oneself to expensive consumer goods.  One great irony this time is an Apple store was comprehensively looted, Apple being a dictionary example of D/S/C virtue signaling.  I do not expect Apple to learn from the experience as perhaps has Leigh Tauss, the editor of a “progressive newspaper,”  who lauded the “protestors” and was shocked, shocked! when they trashed her offices.

The noble protestors also vandalized the WWII and Lincoln Memorials, because nothing says justice like defacing the memory and accomplishments of the Greatest Generation and the Great Emancipator.  That’ll show ‘em.  That’ll end racism and white privilege. 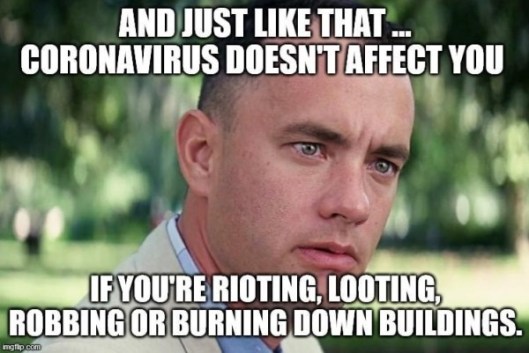 The city urges everyone to exercise caution and stay safe while participating in demonstrations, including wearing masks and physical distancing as much as possible to prevent the spread of COVID-19. The city has made hundreds of masks available to protesters this week.

Of course, Antifa and other thugs up to no good now have leave to wear masks, and certainly not for health reasons, so Frey and other D/S/C mayors and governors have accomplished that much.  Frey further distinguished himself by ordering police to abandon a precinct building, which “protestors” gleefully burned to the ground.  Also richly ironic, destructive and deceptive is D/S/C blame casting as the usual suspects take to the streets and businesses.  The execrable Susan Rice, former Obama Administration National Security Advisor, willing to lie at the drop of a hat, now tells us Russians are behind the riots, looting, arson and other crimes.

A useful general rule: whatever any D/S/C politician, talking head, or fellow traveler has to say, believe the opposite.  They’re engaging in wholesale projection and gas lighting, because they’re just smart enough to know it’s their followers, their creations, out there in the streets and the optics are no good, awful, very bad.  In this case, there is no doubt who is provoking and carrying out the violence, nor is there any doubt of their political beliefs.  Hint: it’s not white supremacists, normal Americans, President Trump or Russians, who are by now, surely tired of being blamed for everything.  They’re also surely laughing their asses off at so many useful idiots they don’t have to recruit or pay.

As usual, the riots are taking place almost exclusively in cities ruled by Democrats for decades—generations–and in those cities, it seems an awfully large number of those committing crimes are Black, despite Black people being only 13% of America’s population.  But it’s not Black people’s fault, no sir:

The Antifa element, well organized, funded and viciously violent, tends to be far more white, but as Buchwald observes, the people responsible for the rampant crime are those actually committing them, regardless of color.

I was particularly disappointed to see Sarah Parcak, an archeologist whose work in using satellite imagery to find long-lost Egyptian treasures is as impressive as it is ground-breaking, went absolutely insane, publishing tweets on how to tear down obelisks, the most obvious target being the Washington Monument.  Her Employer, the University of Alabama, noted she does not speak for that institution of higher learning.  She is a blonde, white woman, whose politics, and lack of common sense, are tediously obvious.

Do the “protestors” have a point?  Are black men being wholesale slaughtered by white policemen?  The invaluable Heather Mac Donald explains:

This pandemic of civil violence is more widespread than anything seen during the Black Lives Matter movement of the Obama years, and it will likely have an even deadlier toll on law enforcement officers than the targeted assassinations we saw from 2014 onward. It’s worse this time because the country has absorbed another five years of academically inspired racial victimology. From Ta-Nehisi Coates to the New York Times’s 1619 project, the constant narrative about America’s endemic white supremacy and its deliberate destruction of the “black body” has been thoroughly injected into the political bloodstream.

If white mobs were rampaging through black business districts, assaulting passersby and looting stores, we would have heard about it on the national news every night. But the black flash mob phenomenon is grudgingly covered, if at all, and only locally.

The irony meter pegged when two Brooklyn lawyers were arrested for trying to torch a police vehicle with a Molotov cocktail.  I wouldn’t hold my breath waiting for that trial or disbarment.

Much has been made of Dr. Michael Baden, celebrity coroner for folks like Benjamin Crump, who the media tells us discovered Floyd’s death was caused by the opposite of the findings of the original autopsy: the cops did it.  But Attorney Andrew Branca, the foremost authority on the law of deadly force tells us Baden found no clinical evidence to support that conclusion, he just inferred it from watching the video, which will tend to make Keith Ellison’s job just a bit tougher.  Imagine the media not telling that whole truth.

(1) Riots: Unless efficiently and forcefully immediately stopped immediately, riots become what we see on TV.  People in mobs will do things they would never do without the cover of the mob.  If people realize the police will not stop them or arrest them, many will unleash their worst instincts.  If the police do not act at that initial stage, they can never put that Genie back in the bottle without the wholesale application of the kind of force the media lives to broadcast, including deadly force.  Let the mob run wild, and citizens and the police will inevitably be put in the position of having to use deadly force.  And no, just because a thug was unarmed does not inevitably mean deadly force may not lawfully be used to stop them.

(2) The Police: In Democrat-ruled cities, they’re screwed.  Not only will they not be given permission to arrest law breakers, they know if they do, their careers are over, particularly if they have to use force.  Should they be forced to use deadly force, it won’t matter how justified they are particularly if the criminal is Black and they aren’t.  Also in those deteriorating cities, the best cops tend to gain experience and flee as quickly as possible, leaving the worst and the resigned, and cities have, for decades, been dramatically reducing hiring qualifications.

We get the politicians we deserve—we vote for them—and they give us the police we deserve.  Imagine, however, gentle readers, being a honest, dedicated police officer, as most, most places, are, knowing if you do your job, not only will you lose your career, likely your liberty. 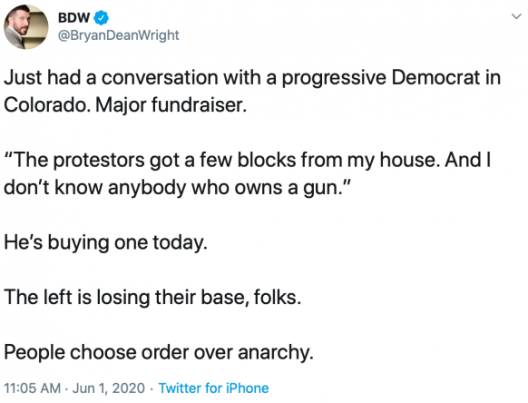 (3) Stopping ‘em.  Despite the fact the police cannot, and in some places will not (under order) protect any individual, and cannot be successfully sued for that failure, the rulers of these cities always want to disarm the law abiding.  They’ll arrest the law abiding for failing to wear a mask, playing in a park, or attending church, but don’t want the same people to be able to protect themselves.  Gropin’ Joe Biden, whose firearm advice is legendarily bad, outdid himself this time:

Instead of standing there and teaching a cop when there’s an unarmed person coming at ‘em with a knife or something, shoot ‘em in the leg instead of in the heart,’ Biden said in an address to black community leaders in Wilmington, Del.

‘There are a lot of things that can change,’ Biden said, regarding police training.

Not only is this advice legally and tactically incompetent, if enforced, it would surely result in dead police officers.  Mr. Biden also promises to empanel a police oversight board when he’s elected, so the federal government can force on police agencies everywhere the brilliantly successful non-tactics of Minneapolis, Baltimore, Detroit and other blue worker’s paradises.

When it comes to self-protection, reality can be a rapid and convincing teacher, as ESPN talking head Chris Palmer learned:

But rationality does exist, just not in D/S/C ruled places: 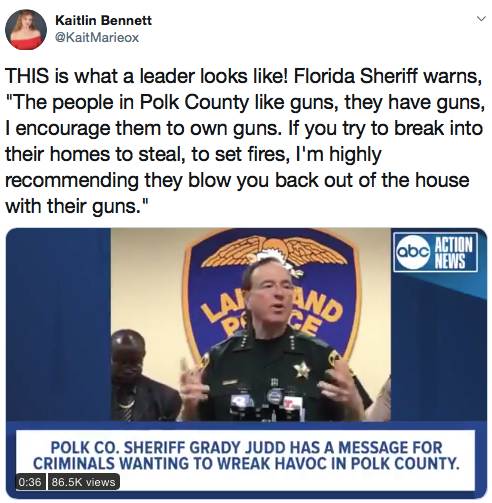 [S]ometimes I get angry, I want to bust some heads, too,’ Terrence Floyd told ABC News. ‘I wanna just go crazy. But I’m here. My brother wasn’t about that. My brother was about peace. You’ll hear a lot of people say he was a gentle giant.’ …

‘Don’t tear up your town, all of this is not necessary because if his own family and blood is not doing it, then why are you?’ said Terrence Floyd. ‘If his own family and blood are trying to deal with it and be positive about it, and go another route to seek justice, then why are you out here tearing up your community? Because when you’re finished and turn around and want to go buy something, you done tore it up. So now you messed up your own living arrangements. So just relax. Justice will be served.

Justice justice, not social justice, which is never about equality under the law.  Let’s let Claire Lehman have the last word:

Well not the last: letting them behave like self-important barbarians isn’t the swiftest idea either.