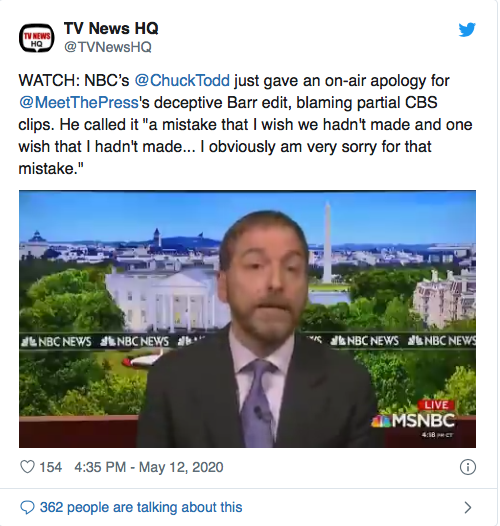 Unless one is a WWII Japanese soldier recently emerged from hiding in a South Pacific cave, it’s well known the media suffers from terminal Trump Derangement Syndrome, and since Donald Trump became president, have agreed that a “new” standard must be employed in their reporting.  That new standard includes making up sources, outright lying, opinion masquerading as news, burying any story that would unfavorably portray Democrats—that’s a great deal of “news”–and a media favorite: deceptive editing.  Chuck Todd of NBC is expert at them all, as Fox News reports:

NBC News anchor Chuck Todd offered an on-air apology after he faced criticism for what was described as a deceptively edited clip of Attorney General William Barr over his defense of the Justice Department’s (DOJ’s) push to drop the case against former national security adviser Michael Flynn.

‘I want to take a moment to talk about something that occurred on Sunday’s edition of ‘Meet the Press,’ Todd said Tuesday during his weekday MSNBC program. ‘During the program, we had a sound byte from a CBS News interview with Attorney General Bill Barr. In the byte that we aired and commented on, Mr. Barr was asked about how he thinks the history of his decision to end the prosecution of former national security adviser Michael Flynn will be written. Mr. Barr answered, ‘History is written by the winner so it largely depends on who’s writing the history.’ In the full version of the interview and transcript, he went on to say, ‘But I think a fair history would say that it was a good decision because it upheld the rule of law.’

Todd claimed that his Sunday program did not make the ‘edit’ but that it simply saw the edited quote before seeing the full quote.

‘Now, we did not edit that out. That was not our edit. We didn’t include it because we only saw the shorter of two clips that CBS did air,’ Todd explained. ‘We should have looked at both and checked for a full transcript, a mistake I wish we had not made and one that I wish I had not have [sic] made. The second part of the attorney general’s answer would have put it in the proper context and had I seen that part of the interview, I would not have framed the conversation the way I did.’

Rational people might be forgiven for thinking this just another example of “too good to check” journalism.  If what Todd is saying is true, that’s what it is.  The clip suppported NBC’s anti-Trump hatred so perfectly, it so perfectly fulfilled the D/S/C narrative, they would not have thought to check to ensure its accuracy.  What would be the point when they just know Trump and everyone associated with him, or who has ever voted for him, is stupid and evil?  Of course, the other alternative is NBC and Todd are simply hateful and malicious and don’t much care about the truth.  They’re D/N/C operatives with bylines.  Which is worse?  Actually, all can explain the “error.”

He added: ‘I am obviously very sorry for that mistake. We strive to do better going forward.’ 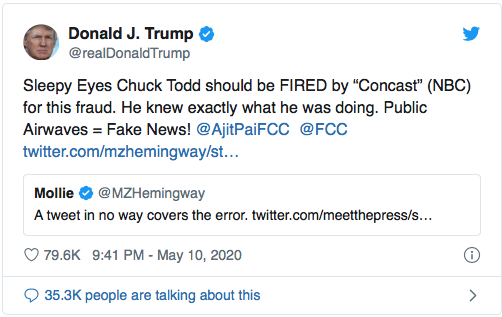 Oh, obviously, of course.  I’m sure Todd is inconsolable.  We must, gentle readers, consider sending him flowers.

The on-air apology was delayed until Tuesday because MSNBC ran special coverage of President Trump’s press conference in the Rose Garden on Monday.

Of course, because I’m sure that Rose Garden coverage ran continuously, every minute of airtime on every NBC/MSNBC/MSDNC program until Tuesday.  There just wasn’t a spare second for an apology until then.

I have just one question: why does every mistake/lie/technical glitch committed by the legacy, hate Deplorables/Trump media always do harm to Deplorables and Mr. Trump?  Wouldn’t the law of averages dictate, perhaps in .000001% of the time, it would be D/S/Cs being harmed?  Odd, that.

PS: do take the earlier link, which is to an article in the Trayvon Martin case archive where NBC deceptively editing an audio recording in an blatant, and particularly stupid attempt to make George Zimmerman seem racist.  This article is also related.

4 thoughts on “Chuck Todd: Too Good To Check”