In General Flynn and Law Enforcement: Hate, I used the Obama Administration’s corrupt prosecution of General Michael Flynn and the foolish actions of some police officers in enforcing unconstitutional and despotic “stay at home” orders to illustrate an important point: public faith in the integrity of law enforcement is essential to a functioning republic.  That has not changed, but the full depth of the Deep State’s determination to keep alive a coup against President Trump by destroying General Flynn is being, day by day, further exposed.  Nowhere is this more obvious than in the bizarre actions of the judge in the case, Emmet Sullivan.

Sullivan has not only refused to accept the Department of Justice’s motion to dismiss the case with prejudice, he initially invited amicus—“friend of the court”–briefs on why the case should not be dismissed, as Fox News reports:

Former U.S. Attorney Brett Tolman thought he had ‘seen everything’ over the course of his career until a federal judge opened the door Tuesday for legal experts and other outside parties to oppose the Justice Department’s motion to drop the case against former national security adviser Michael Flynn.

…Tolman said he believed Judge Emmet Sullivan’s decision was ‘outrageous’ and that the Washington D.C. judge had turned himself into an ‘activist,’ willing to set aside rules, ethics, and precedent in favor of partisanship.

‘She [Flynn’s attorney, Sydney Powell] may file for example a writ of mandamus. That would allow her to immediately appeal this decision and this approach by this judge to the circuit,’ he remarked.

‘And let’s face it, if it looks like this is what’s going on, there is strategy then that’s at the heart of what this judge is trying to accomplish. And, that strategy is offensive to anyone who practices,’ he stated. ‘It’s the United States against Michael Flynn. And, when the United States says we’re no longer going to pursue it because we don’t have the evidence, then the audacity of somebody outside of that coming in who has no authority is outrageous.’

It’s more than outrageous; it’s a usurpation of the authority of the Executive Branch and an offense against the rule of law.  Former federal prosecutor and legal authority Andrew McCarthy agrees:

Judge Sullivan, who has been so unhinged on this case that he originally characterized it as a treason case, decided this was just a peachy idea so now he’s inviting basically an anti-Trump group therapy session,’ McCarthy said.

‘All the lawyers out there who want to file amicus briefs are invited to do that…It will make no difference in the end but it will just drag the process out.

Dragging the process out seems to be Sullivan’s goal, because he has gone beyond amicus briefs—far beyond.  Tolman has seen something new, as Paul Mirengoff at PowerLine reports:

The federal judge overseeing the criminal case of President Trump’s former national security adviser Michael T. Flynn appointed an outsider on Wednesday to argue against the Justice Department in its effort to drop the case and investigate whether Mr. Flynn committed perjury, an extraordinary move in a case with acute political overtones.

Judge Emmet G. Sullivan of the United States District Court for the District of Columbia said in a brief order that he had appointed John Gleeson, a retired judge, ‘to present arguments in opposition to’ the department’s request to withdraw the charge against Mr. Flynn, who had pleaded guilty to lying to investigators as part of a larger inquiry into Russia’s interference in the 2016 election.

How did Sullivan come to select Judge Gleeson? Gleeson co-wrote an op-ed in the Washington Post attacking the DOJ’s motion to dismiss.

Consider that piece an audition for the job Sullivan has now given Gleeson. The title of the op-ed, ‘The Flynn case isn’t over until the judge says it’s over,’ appealing as it must have been to Judge Sullivan, probably ensured the audition would be successful. 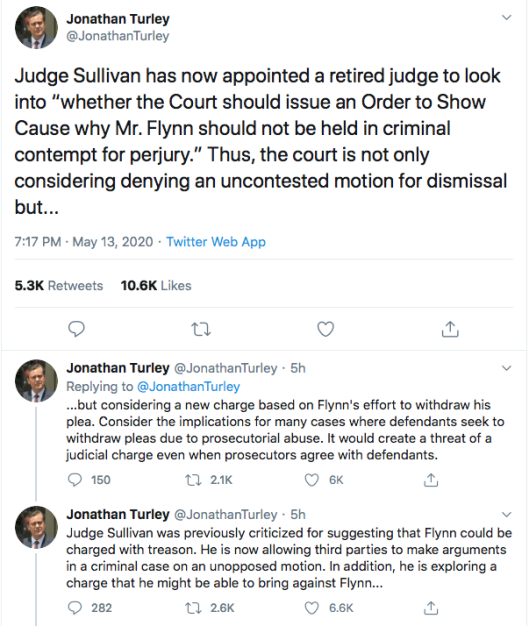 Who is John Gleeson? He’s a lefty judge appointed by President Clinton. Gleeson was a critic of mandatory minimum sentencing before it became fashionable for a certain kind of conservative to take that stance. According to Wikipedia, Gleeson ‘[went] so far as to request federal prosecutors [to] vacate convictions he had been forced to impose’ by law.

Judge Gleeson’s ruling against the FBI in a landmark racial profiling case was reversed by the U.S. Supreme Court in Ashcroft v. Iqbal, a 2009 case. Now, Gleeson will become a friend of the Obama FBI’s corrupt leadership, as he urges Sullivan to stick it to General Flynn in furtherance of the Bureau’s plan to bring Flynn down.

Before becoming a judge, Gleeson was an Assistant United States Attorney for the Eastern District of New York. In that capacity, he worked closely with Andrew Weissman, perhaps the most hardcore Trump hater on Robert Mueller’s defunct team of Trump haters. 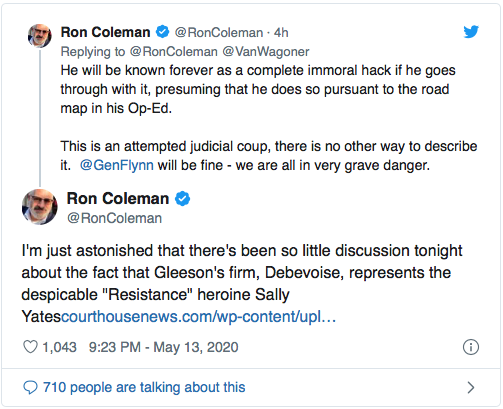 What another remarkable  coincidence!  Weissman has a well- deserved reputation as a corrupt prosecutor.

Only the executive branch has the power of prosecution.  They decide when to prosecute and when to dismiss a prosecution.  The judicial branch has no such power.  Judges are limited only to ensuring there is no prosecutorial misconduct.  For example, if a case if going badly for the prosecution and they suddenly move to dismiss the charges, Judges may refuse if they suspect the prosecution is so moving to put together a stronger case and recharge the defendant in the future–double jeopardy–or they can agree to the motion, but with prejudice so the charge can never be filed again.  That’s not what’s happening here.  The DOJ has admitted Flynn did not commit a crime, its prosecutors were corrupt, and wants the case dismissed with prejudice.  Judges cannot mandate a prosecution, but apparently, Judge Sullivan never got that memo—or the Constitution.

It would be instructive to read my pal Bookworm’s American Thinker article.  Not only is she a fine writer, but a practicing attorney.

Judge Sullivan’s threat to charge Flynn with criminal contempt for perjury still stands.  And how did General Flynn perjure himself?  Apparently Sullivan intends to proceed on the theory that when Flynn pled guilty, he was lying under oath.  This is, to put it kindly, insane.  Defendants often change their pleas.  It’s routine and expected.  It’s also allowed under the law.  In this case, when the government has admitted its prosecution of Flynn was unjust, even criminal, that Flynn’s guilty plea was unlawfully coerced, and has moved to dismiss all charges with prejudice, there is no possible legal justification for Sullivan’s actions.  Both parties, the prosecution and defense, agree.  There is no further issue before the court.  I’m sure, however, D/S/Cs feel a continuation of the political pursuit of President Trump through General Flynn is more than justified.

Havard Law Professor Alan Dershowitz, by no means a Trump fan, is also less than pleased with Sullivan, as Fox news reports:

Harvard Law professor emeritus Alan Dershowitz pushed back on the new ruling by the judge in the Michael Flynn case, arguing he’s acting in a partisan fashion to ‘resurrect’ the prosecution of President Trump’s former national security adviser.

‘The great tragedy is that the American public does not know who to trust. They don’t know who is using politics and misusing national security,’ the author of ‘Guilty By Accusation’ told ‘The Ingraham Angle’ on Wednesday. ‘Everybody seems to be weaponizing national security and other issues for political advantage.’

‘Now, enter Judge [Emmet] Sullivan, who has become the most partisan, the most political in this effort to try to resurrect the prosecution against Flynn.’

In another article, Dershowitz wrote:

As Justice Ruth Bader Ginsberg recently wrote for a unanimous Court: ‘Courts are essentially passive instruments…’ It is not within their legitimate authority to ‘sally forth each day looking for wrongs to right.’ Their role is to ‘decide only questions presented by the

parties.’ Judge Sullivan is improperly exceeding that role in the Flynn case and should be chastised for it, whether one agrees or disagrees with the Justice Department’s decision on its merits.

There is a joke lawyers who practice in Federal Court like to tell. Angel Gabriel summons Sigmund Freud in heaven and tells him God is having delusions of grandeur. Freud asks how God can have delusions of grandeur: There is no one grander than Him. To which the Angel Gabriel responded, ‘he thinks he’s a federal judge.’ But what Judge Sullivan is doing is no joke. He is endangering our system of separation of powers and he should be stopped by a writ of mandamus or a motion to recuse. Judges, too, are not above the law or the Constitution.

It has also been revealed that many high Obama Administration officials, including Joe Biden, unmasked General Flynn some 49 times.  President Trump is not amused: 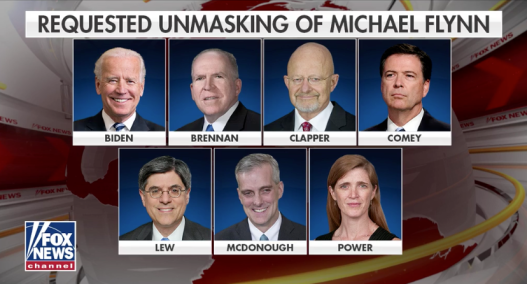 It was the greatest political crime in the history of our country,’ Trump said in an interview with Fox Business’ Maria Bartiromo that aired Thursday morning. ‘If I were a Democrat instead of a Republican, I think everybody would have been in jail a long time ago, and I’m talking with 50-year sentences. It is a disgrace what’s happened. This is the greatest political scam, hoax in the history of our country.’

Trump continued: ‘People should be going to jail for this stuff and hopefully, a lot of people are going to have to pay. No other president should have to go through, and I’ll tell you, Gen. Flynn and others are heroes, heroes, because what’s happened to them. They weren’t after Gen. Flynn. They wanted him to lie about me. Make up a story.’ 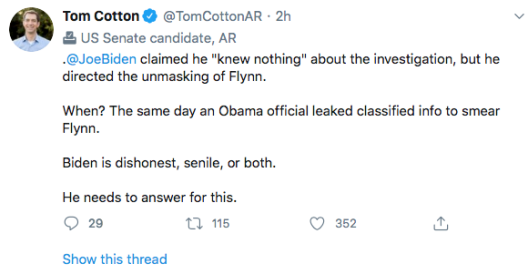 D/S/Cs continue to do everything they can to further the coup against President Trump and the Constitution.  General Flynn is merely a useful pawn, and was pursued in the first place because he threatened to expose the plot and return American intelligence agencies to the role of protecting American interests.  We are in a race against the clock.  Will the DOJ under AG William Barr be able to expose and prosecute everyone involved in the coup before November?  Will President Trump win a second term so those prosecutions can continue, and we have a chance at restoring public confidence in the rule of law?  Or will a Democrat-to-be-named replace Joe Biden, win the presidency, and ensure coup plotters are forever protected?  These are only some of the stakes, and for the moment, it appears Judge Sullivan is very much on the side of the coup rather than justice.

UPDATE, 05-15-20, 1700 CST:  General Flynn’s lawyer, Sydney Powell, has posted an “Open Memorandum” to Barack Obama, which addresses his concern that dismissing charges against the General is an attack on the rule of law.  By all means, gentle readers, take the link.  It’s an epic beat down of a poser who has pretended to be a “constitutional law professor.”  He was never a professor, and merely taught a single class at the University of Chicago for a short time.  He was given the job as a political favor.  Little wonder he knows so little of the Constitution or the law.

UPDATE, 05-16-20, 1245 CST:  What happened to the original FBI 302, the report of the interview of General Flynn by FBI agent Peter Strzok and Joe Pientka?  The FBI claimed it was lost, and it has certainly never been provided to the defense.  The Conservative Treehouse provides convincing evidence that the usual suspects are even deeper into the coup conspiracy than was previously imagined.  Go here.