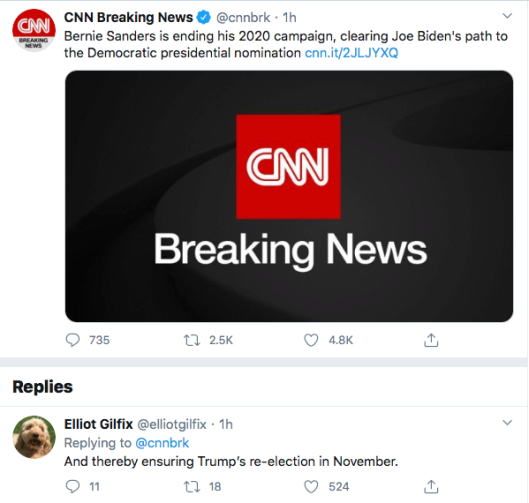 HALLELUJAH!  I won’t have to cover any more D/S/C debates!  I’m still rebuilding damaged brain cells from the last one.  Regarding that “debate” I observed:

The usual themes were present:  Trump is bad, bad, bad.  They alone can save the country, the world, and the universe.  Prosperity is as bad as Trump, and they’re going to save us from it by doing away with tax cuts and modernity.  They’ll give us free stuff, free college, particularly free medical care, free money and health care for Coronavirus-related anything, and everything is now Coronavirus-related.  Trump bad.  Bernie still wants to put executives in jail, and both want to return us to a pre-industrial age that will be powered by unicorn farts and fairy dust.  They want no income inequality and an “economy that works for everybody.”  Above all, government is going to pay for everything for everybody, because money is freeeeeeeeeee!  And Trump bad. 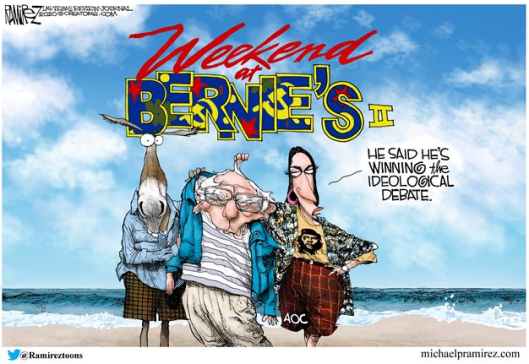 Instead of the Coronavirus, he kept talking about Ebola, but it didn’t matter, because he kept dodging questions about that to return to his usual themes of income inequality, the evil corporations, climate change and the absolute evil of ICE.  Bernie is upset some people live ‘paycheck to paycheck,’ so he’s going to give them lots of free stuff, give all illegals citizenship and free medical treatment.  He is absolutely going to stop ICE enforcing immigration law.  He is also absolutely going to destroy Wall Street, energy companies, drug companies and insurance companies and put their executives in jail, but he’s all for democracy and against authoritarianism, yes Sir!

Oh, and Trump is racist, sexist and homophobic, and ‘nobody is talking about open borders.  Trump lies about that.’  Bernie then spent the rest of the night talking about how he’s going to open the borders.  The moderators suggested climate change is responsible for infectious diseases, so what would Bernie do about that?  He dodged that one, but said we have only 7-8 years before we have irreversible damage, like the East Coast being underwater.  He’s going to do away with fracking and fossil fuels, and Biden’s climate plan just doesn’t go far enough.  It’s not crazy enough and not nearly expensive enough, though, as usual, Bernie wouldn’t say how expensive his was going to be.  Oh, and he’s going to get Russia and China to work hand in hand with us to fix the climate.  Can Iran be far behind?

Citing Biden’s lead of over 300 convention delegates, Sanders declared: ‘The path toward victory is virtually impossible.’

He continued: ‘I have concluded that this battle for the Democratic nomination will not be successful. … I do not make this decision lightly.’

I don’t think he thinks “will not be successful” means what the rest of us thinks it means.

In a curious moment, though, Sanders said that Biden ‘will be the nominee,’ yet went on to stress the importance of continuing to win delegates for his own campaign so he’ll be able to exert ‘influence’ on the party platform.

Here’s the real tip off:

Calling it a ‘difficult and painful decision,’ Sanders stressed that ‘while this campaign is coming to an end, our movement is not.’

Bernie Sanders is, in most respects, the actual enthusiasm, heart and soul of the contemporary D/S/C Party, which is, for all intents and purposes, now a Socialist/Communist party.  To compete, Joe Biden has moved well into Sanders territory: 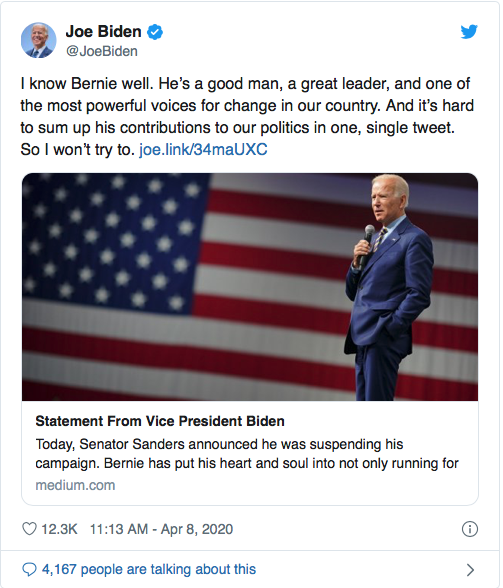 Now the presumptive nominee, Biden, in a statement, said Sanders and his supporters ‘changed the dialogue.’

He said: ‘But more than any one issue or set of issues, I want to commend Bernie for being a powerful voice for a fairer and more just America. It’s voices like Bernie’s that refuse to allow us to just accept what is — that refuse to accept we can’t change what’s wrong in our nation — that refuse to accept the health and well-being of our fellow citizens and our planet isn’t our responsibility too. Bernie gets a lot of credit for his passionate advocacy for the issues he cares about. But he doesn’t get enough credit for being a voice that forces us all to take a hard look in the mirror and ask if we’ve done enough.’

Our planet is our responsibility.  We haven’t done enough.  Right—er, left.  Keep in mind, Sanders has not released his delegates and is working to earn even more.  He’s going to be on whatever ballots remain in the nomination process.  He hasn’t endorsed Biden.

One has to wonder what deal D/S/C honchos offered Sanders?  Will he be secretary of state?  Ambassador to Cuba?  Green Czar?  A fourth home in North Korea, or a nice Dacha in Russia?

More and more, D/S/Cs are realizing Joe Biden is not going to be able to make it to November.  Go here for a three-minute compilation of his recent crumbling, keeping in mind he’s using a teleprompter. If by some miracle he survives to voting, D/S/Cs increasingly believe he has no chance.  And what do we make of this: 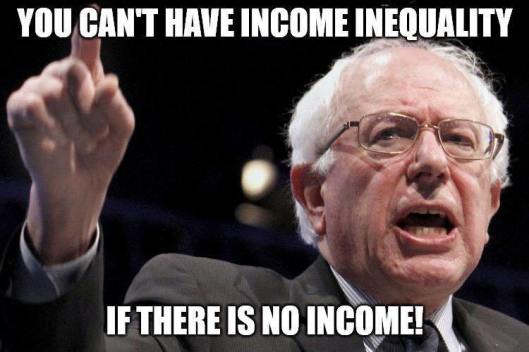 Did the stock market rally because Bernie was dropping out, which means Biden is the nominee?  Did it rally because of the belief no one–which means Joe Biden–can beat Trump?  Are they thinking of some other scenario?  Surely Sanders’ faux withdrawal alone is not enough.

One likely scenario is when Biden flames out, Bernie will be the last man standing.  He’ll have a substantial number of votes, and any attempt to cheat him out the nomination a second time will spark a Bernie Bro revolution that will shatter the Party.  What of Biden’s votes?  To which of the two dozen-ish loser candidates will they be given, or is there someone already waiting in the wings?

But another factor is Biden’s running mate.  Based only on his daily Coronavirus press conferences, many D/S/Cs believe they’ve found a new messiah in New York Governor Andrew Cuomo.  Expecting a Biden disaster, many are advocating he get the vice presidential spot on the ticket so he can step in to save the day without having to expose his New York leftism to the general public any longer than necessary.  Others are arguing for a convention coup that would rocket him to the top of the ticket.  Of course, such people seem to be forgetting Sanders, whose announcement has thrown a major wrench into the works no matter which way the machinations grind. 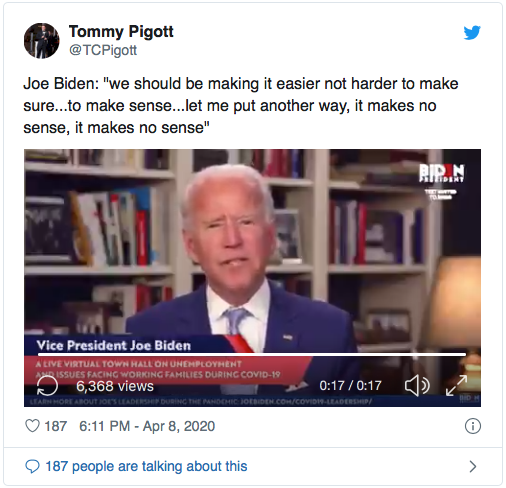 What of Kamala Harris?  She checks many of the woke boxes.  Female, relatively young, and a female of color, she’s a D/S/C dream, and Biden recently said “I’m coming for you, kid.”  He may just want to sniff and grope her, but more likely, he thought of her as vice presidential material, at least at the moment he said it.  Who knows what he thought seconds later?  He probably doesn’t.  He has, however, vowed his VP would be female.  Perhaps if Cuomo or Sanders went trans? 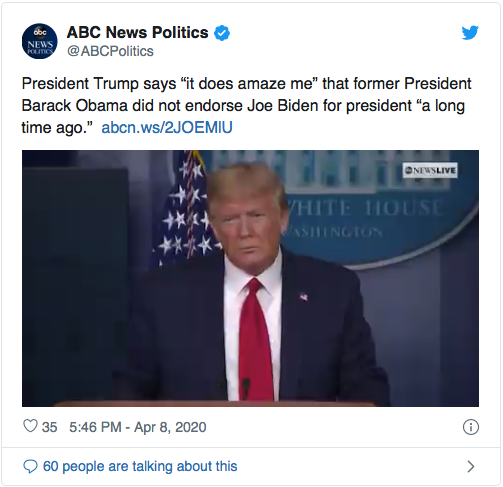 Another wild card is Barack Obama still hasn’t endorsed Biden.  President Trump has suggested he knows what’s up there.  Perhaps he does, or perhaps Mr. Obama is simply waiting for a major train wreck of a convention, or Biden’s self-destruction on the way.  He would, messiah-like, swoop in and save the day by nominating Michelle Obama by universal acclamation.  How could it be better?  Identity politics will be vindicated, and D/S/Cs will smugly grin, thinking it the third Obama term they were so cruelly denied.  As I wrote back in October in Michelle Obama: Battlespace Preparation: 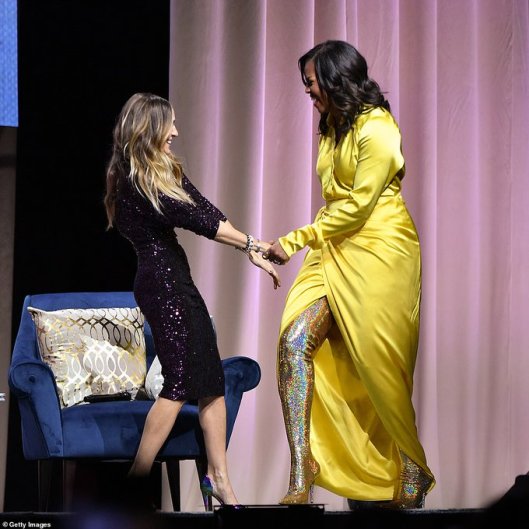 Drafted against her will—how sad!–but nobly willing to sacrifice herself to accept to save the country from liberty, the rule of law and prosperity, Michelle Obama would stride manfully onstage dressed as a lizard thigh boot-clad banana to thunderous applause, having suffered none of the interminable D/S/C debates.  Saved from having to agree with the other candidates in their rush to build another Venezuela, she could appear somewhat American–if one doesn’t look too closely or for too long.  She has scant political baggage, and she recently published a book that would be endlessly excerpted by the media in embarrassingly gushing prose.

The media, which has long ago taken sides, would pull out all the stops to boost her as much as possible.  We would witness an entirely new definition of softball, tongue bathing interviews, even surpassing the ‘why are you so wonderful?’ standard of media Hillary interviews. After all, Barack Obama was the D/S/C messiah.  Wouldn’t some of that rub off on Michelle?  Isn’t she, by association, at least a demi-god?  Surely Barack and Michelle haven’t been planning anything like this?  They’re not the type of people to engage in such Machiavellian intrigues.  Are they?

Perhaps Barack and Michelle have simply settled to the countryside (of Washington DC) to enjoy a lengthy, taxpayer funded retirement, living the life of the senior statesman and school lunch czar.  And if you believe that, have I mentioned I’m a Nigerian prince in exile and if you give me your bank account number, I’ll deposit millions? 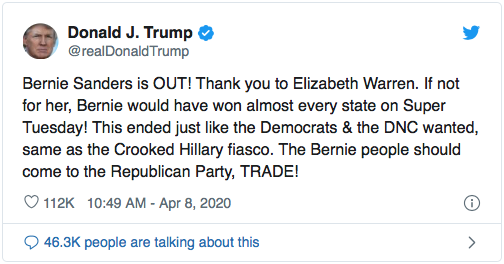 Interestingly, if the D/S/C elite sufficiently tick off the Bernie Bros, it’s actually possible they’d vote for Trump, just to spite them.  Worse, it increasingly appears D/S/Cs won’t be able to keep America in lockdown.  The darned virus apparently isn’t taking political sides, and isn’t going to be nearly as deadly as they hoped–not prayed, never prayed.  They won’t be able to cause chaos sufficient to trick Americans into begging for their benevolent rule, but not for lack of continuing trying.  Some may even understand that trying to impeach Trump over his response to the virus has already blown up in their faces, not that they will let that stop them, because they have Trump Derangement Syndrome, and the only cure is impeachment.

Therefore, keep an eye, gentle readers, on D/S/C demands for “mail-in” ballots.  Their fervor for this particularly effective means of election fraud is at an all time high.  They know without it, they may have no way to cheat their way into the White House in 2020, which brings us back to Bernie not really out of the race, Bernie Bros working whatever havoc they can, Joe Biden’s handlers dosing him with whatever happy meds they think can keep him focused for five minutes at a time, and the D/S/C elite, very, very worried.