“If it saves even one life…”  This is a theme often trotted out by politicians and demagogues—I know: one in the same—to buttress unsupportable arguments.  Aristotle taught effective rhetoric should have a balance of ethos–ethics, logos–logic, and pathos—emotion.  Demagogues skip past the first two—they take too much work—and dive right into emotion.

It’s a cheap trick, a cruel manipulation that assumes people are too stupid to understand ethics and logic, and can be easily manipulated.  This tactic is always used in times of crisis, because it’s so easy to accuse anyone resistant to a ruinous socialist policy of trying to kill the vulnerable, as Nancy Pelosi and her D/S/C minions—pretty much every D/S/C in the Congress—are currently doing in opposing and slow rolling an unprecedented economic recovery package.

What then, is the correct cure for a sidelined nation?  Do we concern ourselves with the good of the individual—every individual?  Or do we seek the greatest good for the greatest number?  What is the ethical thing to do?  What does logic dictate?

Ethos:  In our representative republic, we balance the needs of all citizens with the rights of the individual.  The rights to individual life and liberty are enshrined in our founding documents, and two primary political philosophies reign.

D/S/C philosophy holds the individual is always subordinate to government.  Government cannot possibly be too big, and the solution to any problem, real or imagined, is more government, which means more taxes, more spending, more regulation and less individual liberty.  Of course, all of their “solutions” require complete D/S/C control of government.  We have seen this in the D/S/C attempt to hold an entirely necessary relief bill hostage to every D/S/C woke policy in the book, policies that would do nothing to ameliorate the spread of the virus, or the destruction of the economy.  In fact, their policies would make things much, much worse, and immediately so.

No D/S/C policy can possibly be wrong; it is unfalsifiable.  When it inevitably appears they are wrong, this can only be because not enough money was spent, there were not sufficient and sufficiently harsh regulations and laws put into effect to ensure their success, there was not sufficient time for their wonders to be manifest, and normal Americans were allowed to exist to oppose the inevitable march of history.  To them, the Constitution is an annoying impediment to the vital work that must be done by the self-imagined elite to perfect unwilling Americans.  Only when D/S/Cs are in complete charge and any holding opposing views oppressed and forced to think and act properly can America be said to be truly moral.

This viewpoint is why D/S/Cs demand government do everything to deal with the virus, including complete control of the population and suspension of civil liberties, and why a great many of them, including the media, are demanding that President Trump behave like the dictator they have always accused him of being.  Why can’t he just order the states to do what D/S/Cs know is right?  The existence of federalism and the Tenth Amendment logically limit government, which they absolutely hate.  It is the same thinking that causes D/S/Cs to give very little to charity because they believe it the job of government to take care of those in need. 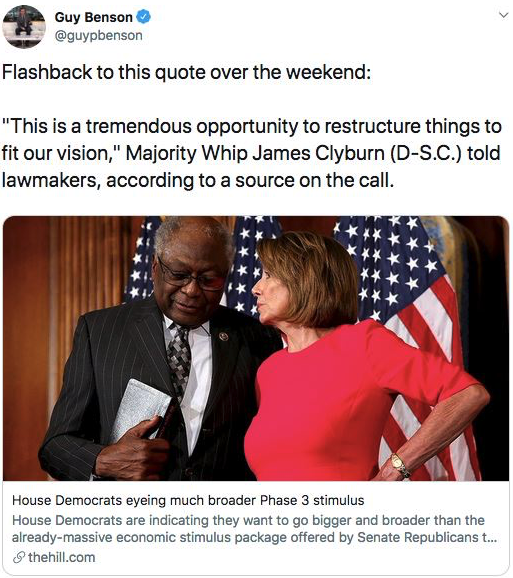 D/S/Cs see the Coronavirus as just another crisis/opportunity to gain and hold power.  How long should the American economy be held hostage to the virus?  As long as it is politically advantageous, as long as damage can be done to President Trump and Republicans.  Damage done to normal Americans is relevant only in that the more desperate they become, the more likely they are to want bigger government, which D/S/Cs are only too happy to provide.

They have, in the current pseudo-crisis, put themselves in the position of rooting for the deaths of Americans and for their bankruptcy.  They always denigrate the prayers and efforts of honest Americans.

Normal Americans believe government is necessary, but should only be big enough to do the things individuals cannot, such as maintain a military, treat with foreign nations, guard our borders, etc.  They give a great deal to charity, not only in cash donations, but in person to person kindnesses, including clothing, food, and a wide variety of other goods and services.  When they see people in need in their community, they handle it rather than asking “why isn’t government taking care of this?”

They believe in paying their fair share of taxes, and they obey the law because they believe in the Constitution and in American Constitutionalism, the willing acceptance of the rule of law and the limitations on government the Constitution imposes.  They believe that each life has inestimable value, and that the rights of each individual must be recognized and upheld.  Most of all, they want to be left alone, not harassed by legions of bureaucrats.

Normal Americans see the virus as a genuine health issue, and expect everything that can reasonably be done be done, but are primarily concerned with the welfare of their families, communities and the nation.  They do not buy the emotional argument because they know life is full of daily risks, and we cannot protect everyone from everything.  If we followed the emotional logic, we’d immediately return to a pre-industrial state of misery for which we are not suited.  They want to resolve the situation as effectively as possible and as soon as reasonably possible with as little damage to everyone as possible, but know we can’t indefinitely wrap everyone in moon suits.

Normal Americans pray for the well being of their fellow Americans because they know prayer is good for them, and for the less fortunate. 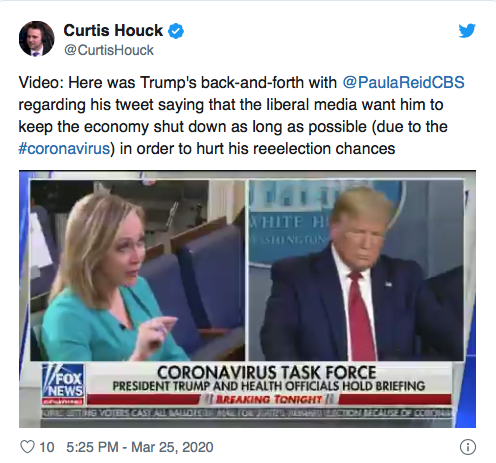 The current situation has been exacerbated, badly, by politics.  D/S/Cs, which includes the media, have engaged in outright lies and hysteria, doing everything they can to harm President Trump and to convince the public to accept far less liberty and far bigger government.  Many news outlets are now refusing to carry Mr. Trump’s frequent updates on the Administration’s efforts, surely because the public overwhelmingly approves of the job he is doing, which is raising his overall popularity.

I also suspect Mr. Trump has been overly cautious in dealing with this contagion because he knows anything he says or does or does not say or do will be attacked.  A never dying example is media claims he called the virus a hoax, when he actually said the media’s coverage is a hoax.  Mr. Trump must be careful to give his enemies as little opportunity as possible, even as they demonstrate their own incompetence, as Gropin’ Joe Biden recently did in an interview on The View:

Are you at all concerned, as Trump said, that we cannot let the cure be worse than the problem itself?’ [Sara] Haines asked.

Biden noted in his reply that the COVID-19 cure ‘will make the problem worse, no matter what.

Logos:  While we do not currently know exactly how widespread the contagion might be, we know some facts that should guide us in determining the proper balance between public health policy and the survival of the economy, hence, national survival.  Kevin Roche at Powerline provides interesting facts:

The best evidence of the threat the virus poses is found by the unintended experiment of the Diamond Princess cruise ship. There were over 3700 passengers and crew on the vessel. Every one of them undoubtedly had constant, heavy exposure to the virus in close quarters. Using gold standard testing, less than 20% of the 3711 people were positive, meaning they were actually infected.  And out of those positive tests, a little over half were actually symptomatic.  8 people died, or about 2% of those with symptoms or .2% of percent of the vessel population.  The cruise ship population skewed older than a general population and was therefore more susceptible and obviously had far more contact with the virus than the general population will.

These are very encouraging numbers when you consider the extensive exposure to the virus on the ship, which is completely unlike all our daily living situations. In the real world, this means a very large percent of people won’t become infected even if exposed to the virus, of those exposed, well under half will have any symptoms, a very small percent will become seriously ill and the fatality rate of those infected will be down in the one-half percent range or less. This is the most realistic picture we have of the actual effect of the virus. You cannot trust other percents or numbers you see because, unlike the cruise ship, we have not tested the entire population, but logic tells us that the numbers will be smaller in the real world. The average person has basically a zero chance of having a serious illness from the virus, even if they were in heavy contact with it.

Some additional information is in order.  During the 2017-18 flu season, about 61,000 Americans died.  The death toll of the current flu season stands at around 30,000.  Death toll figures for the Coronavirus are, at best, variable, but as this is written, approximately 780 have died, those victims overwhelmingly being the elderly with pre-existing, underlying medical conditions that make them more susceptible to the virus.  For most Americans, there appears to be little risk of contracting the virus, and for those that do, little risk of long-term complications or death.

As a teacher, I am constantly immersed in just about every bug at large in the population.  Surely, I have built immunities to many common illnesses, and I take a yearly flu shot, and have taken the pneumonia and shingles vaccinations.  I routinely take precautions like hand washing.  I work in an inherently risky profession.

I remember the Swine Flu outbreak of 2009-2010.  Despite living in a suburb of a major metropolitan area, my school and community were essentially unaffected.  Schools weren’t closed, businesses and restaurants remained open, and life went on as usual, not only in my community but throughout the nation.  According to the CDC, something over 12,000 Americans died from that flu, and most of those deaths were among the elderly.  The current outbreak, which will almost certainly be reduced by imminent warm weather, is nowhere near that level of mortality, nor can anyone say every current measure is effective in reducing mortality.

President Trump has said he’d like to at least begin a return to normal by Easter.  That seems a reasonable goal.  As this is written, Nancy Pelosi and House D/S/Cs continue to slow walk any relief for the American people, which can only delay our eventual economic recovery.

Returning Americans to work so they can provide for their families without reliance on government is the ethical, moral thing to do.  Unless they do that soon, from where will come the tax revenues to pay for stimulus packages?  Logically, keeping Americans out of work even to Easter now seems unnecessarily cautious, particularly when we consider the numbers and our responses to past, more deadly contagions.  Emotionally, what are you trying to do, bankrupt families and the country?  Destroy lives, fortunes, and deprive the elderly of their retirements?  What kind of monster are you?!