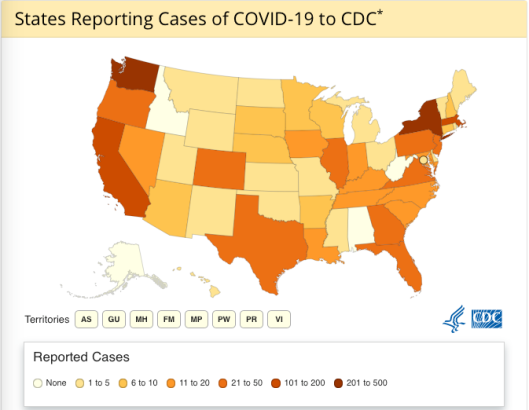 If anyone doubted that many D/S/Cs are so stricken with terminal Trump Derangement Syndrome they are willing—no, delighted—to see America and Americans damaged so they can blame it on Trump, the current Coronavirus “pandemic” is prima facie and conclusive evidence.  “D/S/Cs,” of course, includes the D/S/C media propaganda arm.  We have been treated to the disquieting spectacle of various congressthugs, congressidiots, and media talking heads all but wringing their hands and maniacally cackling while claiming this time they’ve really got Trump, and if millions have to die, if people’s businesses and savings are destroyed, if nations go to war, that’s a small price to pay for getting Orange Man Bad once and for all.  An example from David Catron at The Spectator:

It’s clear that the Democrats see the coronavirus outbreak as an opportunity rather than an epidemic. Having failed to bring down President Trump with ridiculous conspiracy theories involving Russia and Ukraine, they are desperately attempting to convince the public that he is somehow exacerbating the COVID-19 crisis. House Speaker Nancy Pelosi and Senate Democratic Leader Chuck Schumer, for example, issued a joint press release Sunday that included the following fiction: ‘President Trump continues to manufacture needless chaos within his administration and it is hampering the government’s response to the coronavirus outbreak.’ Predictably, Pelosi and Schumer fail to provide any objective facts to support this claim.

Certainly, our saintly media have been absolutely, historically consistent in covering such contagions?  Riiiiiiight.  Consider this from John Merline at Issues And Insights:

The potential impact of the coronavirus might still be unknown, but the media hype is already plain as day. Particularly when you compare how they are covering this pandemic with the last one, which happened to occur when Barack Obama was in the White House.

Merline compares NYT and CNN coverage of the Swine Flu pandemic during the Age of Obama with their contemporary Coronavirus coverage:

The day after the World Health Organization declared the coronavirus a pandemic, and President Donald Trump gave a national address, CNN’s front page was almost entirely devoted to coronavirus.

But the media coverage of the outbreak in the weeks leading up to Wednesday [the Coronavirus] was just as breathless. Indeed, some of the panic in the stock market and the government can be blamed on the end-of-the-world hysteria that the press has been whipping up for some time now.

The day before the WHO’s declaration of a pandemic, for example, CNN posted a story calling the coronavirus outbreak “unprecedented in modern times.”

Although everyone seems to have forgotten the swine flu was even a thing, it infected nearly 61 million people in the U.S. from spring 2009 through early 2010. And it claimed more than 12,000 and as many as 18,000 lives, according to a Centers for Disease Control studypublished in 2011. In total, the disease is now believed to have caused more than 200,000 deaths worldwide.

(As of this writing, confirmed cases of coronavirus in the U.S. are a little over 1,700, with 40 deaths attributed to the virus. Worldwide, confirmed cases number fewer than 130,000 and just over 4,700 people have died.)

The swine flu was a serious enough outbreak for President Barack Obama to declare a public health emergency in late April 2009. The WHO declared it a pandemic in early July – at which time 18,000 Americans had contracted novel flu virus and 44 had died. And unlike coronavirus, the swine flu was more deadly to younger people. Obama declared a national emergency when the virus reemerged with a vengeance in the fall.

Yet the press barely covered any of these events.

Contrast that with the media’s coverage of the Coronavirus. Far more Americans die of the flu every year than have thus far died, worldwide, from the Coronavirus.  So why the panicky coverage?

But it should be obvious to anyone that the scale and intensity of the coronavirus coverage is far beyond the actual risk posed by the disease. Even if coronavirus is twice as deadly as the swine flu pandemic, more people will die from falling down this year than from COVID-19.

More likely, the Trump-hating leftist media are hoping – consciously or not – that a health panic will do what the Russia investigation and the impeachment failed to. Namely, drive Trump out of office.

How else do you explain the vast difference in the way they’ve treated these two deadly pandemics?

How else indeed?  Consider this from my pal, Bookworm: 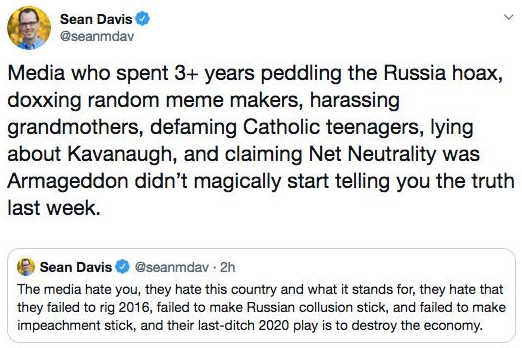 At the beginning of March, President Trump said that, while the experts predict a 4.5% mortality rate, he thinks it will be lower than that. He noted that a lot of people have very mild cases, so they’re not counted when calculating the mortality rate. Some, he said, have infections so mild, they don’t realize they’ve got coronavirus and they go on with their normal lives. In the context of that statement (which has proven to be correct), Trump said this: ‘We have thousands or hundreds of thousands of people that get better, just by, you know, sitting around or even going to work, some of them go to work.’

When I read that, what I understand Trump to have said is that our mortality rates our skewed upwards because, while we know coronavirus is contagious, we have no way of counting the cases that are so mild people go on with their ordinary lives, including going to work. If you’re only guesstimating the number of people who don’t show up at the ER, you’re going to have a seriously inflated mortality rate.

But that’s not what the media said Trump said (and no links to scum media):

Bookworm goes on to explain—take the link and read her article; you should be reading her daily—how media outlets warped Mr. Trump’s comments to claim he was telling infected people to go to work.  This following their claiming Mr. Trump said the Coronavirus was a hoax when he actually said their irresponsible and false reporting on it was a hoax.

Let us, before going further, be sure of several definitions, via Merriam- Webster:

Pandemic: occurring over a wide geographic area and affecting an exceptionally high proportion of the population.

Epidemic: an outbreak of disease that spreads quickly and affects many individuals at the same time.

From this we can conclude that “pandemic” is best used for something encompassing continents, while “epidemic” is likely correct for a contagion in a more restricted area.  However, the Coronaviris is not, at present, affecting an exceptionally high proportion of the world, or the US population, quite the opposite.  As this is written, the total known Coronovirus cases number a bit over 145,000, with about 5,400 deaths—worldwide.  The current US death toll is less than 50 of 1629 cases reported, most of those deaths localized to a nursing home in Washington state.  The virus is most dangerous to the elderly, particularly those with pre-existing conditions.  It thus far does not seem to be a significant danger for the young.  For a bit of perspective, keep in mind that annual deaths from the flu in the US numbered from between 12,000 to 61,000 since 2010, with about 12,000 in the 2019-2020 flu season thus far.

Please keep in mind, gentle readers, these numbers are general.  I cannot guarantee their absolute accuracy, but based on everything I’ve been able to find, they’re likely not far off, if they’re off at all.  The primary point is that thus far, the Coronaviris represents less of a threat than the seasonal flu, much less.

Sharyl Attkisson at Just The News, confirms this conclusion:

*Almost all of the reported coronavirus deaths in the U.S. happened in long-term care facilities in Washington State. And almost all of those occurred at the same facility.

*Most people who get coronavirus have mild or no symptoms.

*No young or middle-age people have died of coronavirus in the U.S.

*Most around the world diagnosed from January-March 1 have already recovered.

Take the link and read her summary, which quotes the CDC’s conclusion that the risk of exposure to the virus for most people is low.  The CDC’s Coronavirus webpage is here.

Final Thoughts:  While this could turn into a genuine pandemic, that does not, for now, appear to be the case, and it seems unlikely.  Despite the best efforts of the Media and D/S/Cs generally to either blame President Trump for the virus, and/or to claim he is not handling it properly, the world’s medical establishment is hard at work on this contagion, which should give us reasonable confidence it will be contained to the greatest possible degree.  It also appears Mr. Trump and his administration have done well indeed.  We should also be absolutely confident that the best way to determine when any talking head is lying is by the slightest movement of their lips. 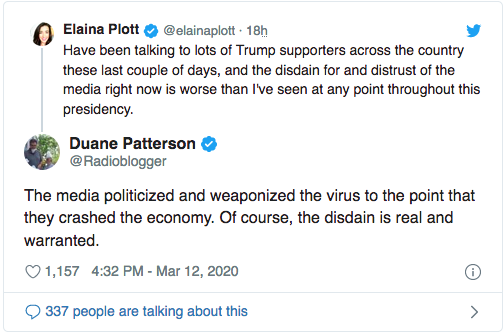 However, the panic induced by those seeking to destroy Donald Trump has already done substantial damage to the US and world economies, and by all indications, entirely unnecessarily.  If Americans don’t remember what D/S/Cs are doing, if they don’t realize they care nothing for the welfare of America or Americans so long as they can seize and keep power, we deserve whatever we get in November.  Better to ensure that adults rather than evil, demented children, control both houses of Congress and the presidency.  Better not to reward evil.