First, the Mueller investigation blew up in the D/S/C’s faces.  He and his Democrat operative lackeys were reduced to issuing a doorstop of a report that admitted there was no evidence Trump was ever involved with Russia, and tried to salvage it by essentially saying they had no evidence of obstruction, but were not going to say that explicitly, so there, nyah, nyah, nyah!

But surely they could salvage something, at least be able to continue the RUSSIA! innuendo if they got Mueller to testify in public.  That blew up in their faces when Mueller revealed himself to be a man who knew little or nothing about the investigation of which he was clearly nothing more than a figurehead, and a once formidable man clearly in mental decline.   It was a sad spectacle.

Desperate, D/S/Cs came up with a phone call to the Ukranian president revealed by a fake whistleblower.  Bribery!  Treason!  Quid Pro Quo!  They rode that one to impeachment and a senate trial they knew they could never win, hoping against hope to fatally damage Trump’s electoral chances.  They made him stronger and find themselves—the horror—with Bernie Sanders as their frontrunner.  Do they cheat him again and lose because the Bernie Bros refuse to vote at all, or worse, vote for Trump, or do they go with him and lose regardless? 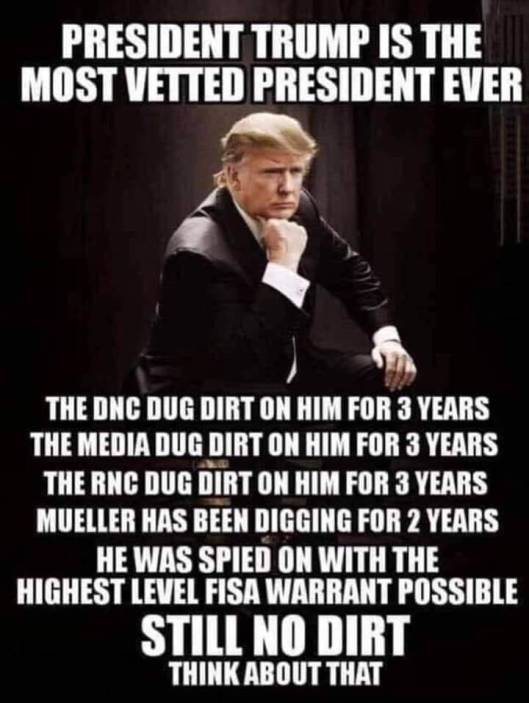 Post-impeachment debacle, they’ve left their options open and are on the lookout for something—anything—they can turn into another scandal/impeachment, and with the inevitable help of The New York Times and The Washington Post, they found something:

Intelligence officials warned House lawmakers last week that Russia was interfering in the 2020 campaign to try to get President Trump re-elected, five people familiar with the matter said, a disclosure to Congress that angered Mr. Trump, who complained that Democrats would use it against him.

The day after the Feb. 13 briefing to lawmakers, the president berated Joseph Maguire, the outgoing acting director of national intelligence, for allowing it to take place, people familiar with the exchange said. Mr. Trump was particularly irritated that Representative Adam B. Schiff, Democrat of California and the leader of the impeachment proceedings, was at the briefing.

That’s right: they finally, finally, finally had the goods on Trump and Russia. Reporters Adam Goldman, Julian E. Barnes, Maggie Haberman and Nicholas Fandos had him for sure this time!  But that was only the beginning.  Not only did the Russians want to get Trump elected, they wanted to get Bernie Sanders elected too, as Bob Fredericks and Nolan Hicks at The New York Post reported:

US intelligence officials reportedly believe the Kremlin is attempting to manipulate both sides of the upcoming presidential election — boosting Bernie Sanders and President Trump.

The cascade of revelations reached a fever pitch on Friday as Trump heatedly disputed the assessment that Russia was helping him, and The Washington Post reported that officials told Sanders about the Kremlin’s support for him in this year’s hotly contested Democratic primary.

The broadsheet’s sources did not specify how Moscow is interfering in favor of the Vermont senator, who has surged into the lead.

‘The intelligence community is telling us they are interfering in this campaign right now, in 2020,’ Sanders told reporters in California just after the story broke. ‘I say to Mr. Putin, if elected president, trust me, you are not going to be interfering in American elections.’

Sanders said he was briefed about the Kremlin’s attempts to intervene in the 2020 election last month and questioned the timing of the story, which broke the day before Nevada voters caucus.

‘Why do you think it came out?’ Sanders sarcastically asked. ‘It’s The Washington Post? Good friends.’

Actually, “US Intelligence Officials” were not able to provide any actual—oh, what’s the word?—evidence to support those contentions, but what’s evidence in comparison with screwing Trump or keeping Bernie from getting the nomination?  The media and others would have us think all the supposed Deep State plotters like James Comey, Sally Yates, and Rod Rosenstein have left government service, leaving the FBI, DOJ, CIA, etc. once again non-partisan and pure, but it was always a lie.  The highest-level people in any bureaucracy don’t do dirty work; they only scheme, wringing their hands while maniacally laughing.  It’s always lower ranking minions loyal to them rather than the Constitution and the American people that get their hands—and souls–dirty.  They’re far more numerous, lower profile, and harder to root out.

The idea Russia prefers Trump over a Democrat isn’t a new idea.  It was first proposed in 2016.  Clarice Feldman at The American Thinker explains why that was then a particularly stupid idea:

Once again operating out of their well-worn playbook, the Democrats are spinning the cylinder and placing the gun to their heads in suggesting the Russians are backing the President’s re-election, and once again they missed the empty chamber and fired a bullet into their leading candidate.

In 2016, when they claimed that Trump was Russia’s choice and had secured his election, they ended up with highlighting to voters what the media had covered up: It was Hillary Clinton who approved the Uranium One sale of 20% of U.S. Uranium. It was Hillary who received assistance to this end from the Russian-paid lobbying firm APCO Worldwide. It was her husband who was paid $500,000 for a short talk in Russia by a bank connected to the Kremlin­­­­­­. It was Hillary’s foundation that received $145 million from companies connected to the Russian nuclear company Rosatom. It was Hillary who was responsible for not providing security to our diplomats in Benghazi and who bald-faced lied about the murder of our ambassador and his defenders. It was Hillary who prompted the murder of Qaddafi after he was cooperating with us on nuclear disarmament and set off the greatest wave of refugees since World War II.

Hillary is also a lifelong Marxist, and as corrupt a corruptocrat as one can possibly imagine.  Who can reasonably believe Russia would want Trump, a man whose policies have done nothing but major damage to Russia, over someone like Clinton or Sanders, people who would not only destroy America’s energy independence and our economy, but would emasculate our military, all to the great benefit of Russia?  And then this new coup attempt fell apart, as Eli Lake at Bloomberg.com reports:

From the perspective of the #Resistance, the scoops were both terrifying and vindicating: An intelligence official told lawmakers last week that the Russians were meddling again in U.S. elections and seeking to re-elect President Donald Trump. This infuriated the president, who abruptly fired the current director of national intelligence, Joseph Maguire, and replaced him with a loyalist, U.S. Ambassador to Germany Ric Grenell.

Unfortunately, there is less to this story than Trump’s opponents would like. There is no formal intelligence assessment, and the new DNI is only temporary. This is not a case of the president trying to suppress or distort intelligence. [skip]

As Representative Adam Schiff tweeted, referring to stories in the New York Times and Washington Post: ‘We count on the intelligence community to inform Congress of any threat of foreign interference in our elections. If reports are true and the President is interfering with that, he is again jeopardizing our efforts to stop foreign meddling. Exactly as we warned he would do.’ 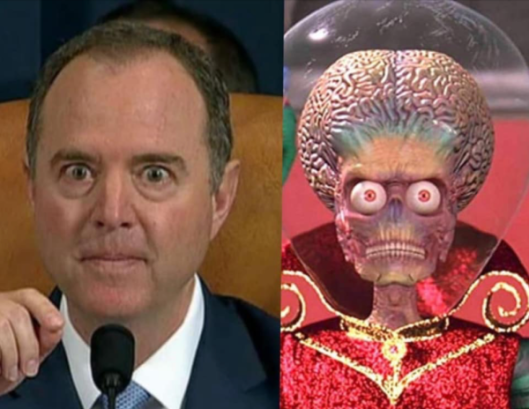 Schiff?  Wasn’t he the bug-eyed lunatic behind the impeachment?  The man caught in myriad lies over years?  Why yes, he was.

In fact, Schiff — who was present at the briefing in question — knows that there is no formal intelligence finding that Russia is meddling on behalf of Trump. Administration and House Republican sources tell me that the intelligence official who was briefing the committee went ‘off script’ when asked about Russia’s preference for Trump in the presidential election. No other representatives from the intelligence community at the briefing backed up her assertion, these sources say, nor did the briefers provide specific intelligence, such as intercepted emails or conversations, to support the claim.

One can only hope Mr. Trump will have every “intelligence official”—like Ms. Shelby Pierson–involved immediately fired, or reassigned to a one-woman Arctic listening post.  Interestingly Jake Tapper, a D/N/C operative with a byline, who occasionally acts like an actual journalist, also tossed a wrench in the D/S/C gears: 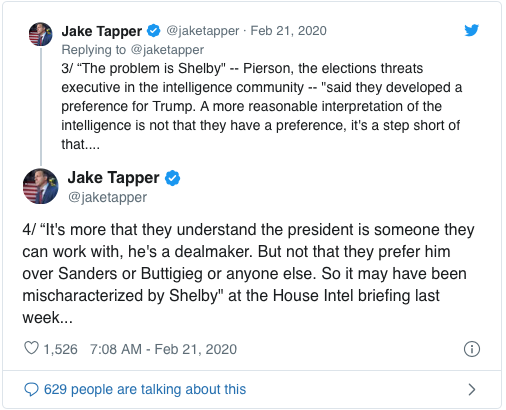 Trump a dealmaker?  Who coulda thunk it?  It might be profitably remembered that Trump’s deals have been to the great benefit of America, which D/S/Cs hate, but our adversaries respect, even fear.

That had to leave a mark.  And so did this:

Does Mr. Trump have the goods on Schiff?  That would be delightful, truly poetic justice.

Let us consider, gentle readers, reality.  Donald Trump’s policies have caused great harm to Russia.  Natural gas is their primary export, and Trump has eaten into those profits.  He has armed Ukraine, where Obama sent only blankets and MREs, his sanctions are badly damaging Russia, our military is once again strong and becoming stronger and even more advanced, and Trump’s demand that NATO members pay their fair share has strengthened NATO.  Trump’s foreign policies have badly damaged Russia and Russian allies, our economic success is also anathema to Russia.  On the other hand, Bernie Sanders is an ardent communist.  He would destroy the American economy, cripple our military, and suck up to Russia and every other anti-American dictatorship in the world.  He admires them.  Every D/S/C presidential candidate would do that to varying degrees and on varying timetables.  Vladimir Putin is no fool.  He would prefer Trump over Sanders and the rest?  Normal Americans aren’t that stupid.  D/S/Cs are, or at least that cynical.  They’ll do whatever harm to America necessary in order to rule.

It goes without saying Russia wishes us ill and does what it can to sew dissention.  During the Cold War, they had moles in every branch of government and every bureaucracy, including, often, the White House.  Their human intelligence capabilities have always outstripped ours, and there is no reason to think they do not have moles throughout the Deep State.  Whenever useful idiots like Adam Schiff and Nancy Pelosi continue the coup, Putin and Russian Intelligence have to be laughing their red asses off.  However, there is no evidence Russian efforts in 2016 changed a single vote, nor is there any known contemporary evidence their efforts will do that in 2020.  What can they possibly do against the nearly half a billion dollars–thus far–spent by Michael Bloomberg to influence the 2020 election?

If we are to believe Russia has been running a campaign to influence our elections before 2016, and continue to do so today, where are the stalwart intelligence agents of the “intelligence community?”  What are they doing to stop such a nefarious and damaging plot, other than trying to damage the president by providing “bombshells” to be leaked to a bombshell hungry media?  Shouldn’t they be working against America’s enemies, rather than their own—President Trump and Normal Americans?

Will D/S/Cs try another impeachment?  Before November?  After Trump is re-elected?  Can they be that stupid, that desperate? 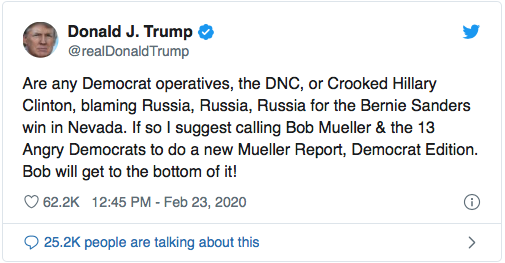 Some would say they won’t, because they know Republicans would do the same to them if a D/S/C took the White House.  Unfortunately, that’s likely wrong.  Republicans tend to have at least grudging respect for the Constitution, and if and when D/S/Cs take the presidency, they’re going to do whatever is necessary to ensure no Republican will ever again be elected president.  “Fundamental transformation,” you know.

So yes, this “scandal” too is a lie, which does not mean it won’t be the basis for a new impeachment.  The last made Trump stronger and more popular.  Are D/S/Cs that stupid, or will they focus their efforts on derailing Bernie Sanders instead?  Stay tuned.