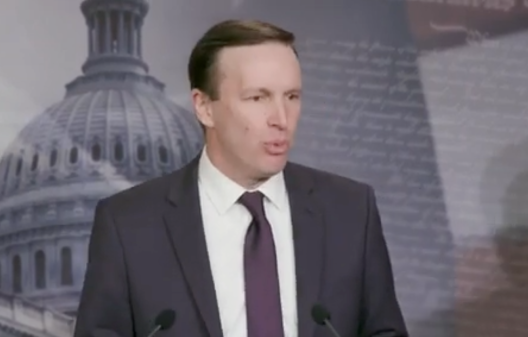 It has always been an article of faith among D/S/Cs that merely talking with the enemies of the United States is in and of itself a great diplomatic accomplishment.  Securing anything for the United States, accomplishing anything that might deter war or make American safer is very much beside the point.  Merely talking to people that would love to murder every American in the most barbaric ways possible is the height of statesmanship.

Over the years, various people—almost exclusively D/S/Cs–not constitutionally authorized to treat with foreign governments, have done just that.  Our enemies call such people “useful idiots,” because in so doing, they are betraying America and furthering the goals of those that would do America harm.  One such is Senator Chris Murphy (D-Conn), as Fox News reports:

Sen. Chris Murphy, D-Conn., confirmed on Tuesday that he met with Iran’s foreign minister, arguing that ‘it’s dangerous not to talk to adversaries.

Let us ignore, for the moment, Murphy does not know what kind of communication President Trump or his designees are having with the Iranians or anyone else.  Let us also ignore that Iran declared war on America in 1977 and has been killing Americans since.  Let us also ignore that when the Iranian government chants “death to America,” they are not engaging in figurative language.

2: He [the President] shall have Power, by and with the Advice and Consent of the Senate, to make Treaties, provided two thirds of the Senators present concur;

Here’s what Murphy told the public: 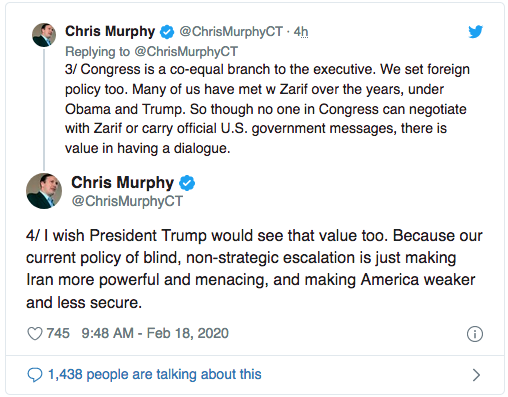 I don’t know whether my visit with Zarif will make a difference. I’m not the President or the Secretary of State — I’m just a rank and file U.S. Senator. I cannot conduct diplomacy on behalf of the whole of the U.S. government, and I don’t pretend to be in a position to do so,” Murphy wrote.

If he’s not pretending to be in a position to do so, why was Murphy, and several of his fellow D/S/C Senators, talking with our deadly enemy?

But if Trump isn’t going to talk to Iran, then someone should. And Congress is a co-equal branch of government, responsible along with the Executive for setting foreign policy. A lack of dialogue leaves nations guessing about their enemy’s intentions, and guessing wrong can lead to catastrophic mistakes.

“Someone should”!?  Cool.  Why not me?  Why not Bob, the local stoner?  Why not Mary who runs the local floral shop?  Congress is a co-equal branch that has only one role in foreign policy: advise and consent.  They don’t formulate it.  They don’t negotiate it.  They can only vote treaties—treaties already negotiated by the President, and nothing else—up or down.  That’s their only constitutionally valid power regarding foreign policy.

Let’s see what Secretary of State Mike Pompeo has to say about Murphy, courtesy of The Free Beacon.com:

Pompeo, speaking to reporters during a tour through Africa, said that the Democrats who participated in the meeting are aiding and abetting the globe’s foremost state sponsor of terrorism and anti-Semitism.

‘This guy is designated by the United States,’ Pompeo said, referring to Zarif’s recent addition to official U.S. terrorism lists

‘If they met,’ he said of the Democratic senators. ‘I don’t know what they said. I hope they were reinforcing America’s foreign policy, not their own.

Let us give Murphy the benefit of the doubt, even though he likely does not deserve it.  Let us assume he did not, like virtually every D/S/C before him, do his best, like the traitorous John Kerry, to undercut the efforts of the elected Republican President.  Let us assume he did not tell the Iranians Trump would be defeated in 2020 and all they had to do is wait for D/S/Cs to be in control again to get what they want.  Why shouldn’t he talk with the Iranians?  Why shouldn’t I, or Bob or Mary?

Murphy has been a harsh critic of the administration’s policy toward Iran and said in a Medium post that he had raised the U.S. airstrike that killed a top Iranian general in Iraq and told Zarif that despite differences, Congress and the administration are united in sending a message that any Iran-backed attack on American troops in Iraq would be ‘an unacceptable escalation.’

I suspect Mr. Trump, through the proper diplomatic channels, was just a bit more forceful on that point.  There are times when leaving an enemy guessing about our intentions is vital.  This is one of Mr. Trump’s strengths; he is not like previous presidents.  He is unpredictable, but has demonstrated he will use decisive military force.  This is surely a good thing when dealing with theocratic, apocalyptic madmen like the Iranian Mullahs.  The Iranians know what will lead to catastrophic consequences—for them.  As much as they want to murder every Jew and American—including idiotic Senators—they want, as much, to remain in power.

The danger is not in leaving enemies guessing, but in giving them mixed messages.  Other countries, particularly totalitarian countries, speak with one voice only.  Any Iranian doing otherwise is liable for assassination.  When people with that mindset find themselves approached by useful idiots, the probability of misunderstanding is great, or they may be canny enough to use those idiots to sew dissention among their enemies.

Our government, particularly in foreign affairs where deadly and dedicated enemies are involved, must speak, always, with one, clear voice.  People like Murphy aren’t helping, even if they are sincere, and even if Murphy did as he claimed.  One cannot, however, help but think Senator Murphy and his D/S/C pals were less than complimentary toward Mr. Trump, and that considering their public statements about Mr. Trump and his Iran policy, believe they tried to impose their own policy, which is far more accommodating to Iran.

If they did this, considering Iran is in a declared state of war with America, they arguably gave aid and comfort to an enemy, and may arguably be charged with treason.  Of course, no such thing would ever happen, certainly not to a D/S/C, and Republicans tend not to do such things in the first place.  I was about to ask where the Media’s outrage over Murphy is, but we know the answer to that, don’t we gentle readers?

It is, however, reassuring to know some things, like death, taxes, fake news, and D/S/C freelance foreign policy conducted by useful idiots never change.