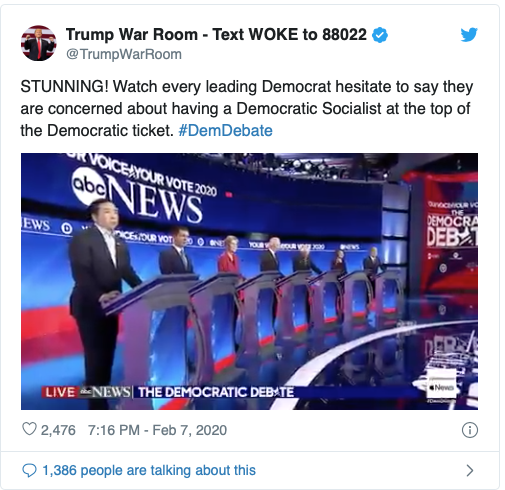 “Racist” is the new “deplorable.”  Once again, gentle readers, I failed you, but it was necessary.  Had I watched the whole thing, I would have been eating blood pressure meds like candy and would surely have suffered a loss in the tens of IQ points.  I suppose, on and off, I managed about an hour and 15 minutes of the whole, so I’ll supplement my observations with those of others.

I don’t usually post anything but my weekly education article–I’m still doing that–on Mondays, but this needs to be timely, so here goes.  As I’m sure you’ve realized by now, I post Monday’s article Sunday evening, Tuesday’s article Monday evening, etc.. 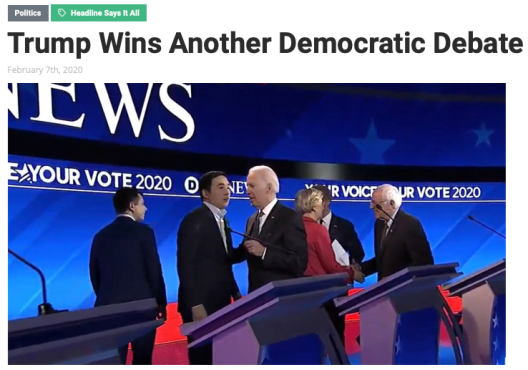 In general, the primary theme of this debate/debacle was America is, and Americans are, absolutely RACIST!  Every damn one of the racist racists is RAAAAAAASSSSSSSIIIIIIIIIIST!!!!!!!  The D/S/C candidates are the only ones who can do something about it.  Nobody else will, especially Trump–the racist–so they, the only non-racist people in America, will have to act, boldly, of course, because that’s just what they are: bold, and visionary too–and not racist. They’re doing this mostly, of course, because black Americans are experiencing their own awakening and are promising to vote for Trump in record numbers.  If that happens, the D/S/C Party is an ex-party, pinin’ for the fjords, ceased to be, and gone off to join the choir invisible.

The rest was mostly a rehash of every previous debate: Trump BAAAAAAAAD, really bad, bad on toast, bad on roller skates in Hell, and he should be impeached, again and again and again, and if they’re elected, they’ll pursue Trump–and his racist family–to the ends of the Earth, hell, the ends of the known universe!

They’re all in for gun control, though most of them are a little bit careful about admitting that just now–that didn’t work out so well for Beto–remember him? Trump–he’s really bad you know–is killing NATO because he’s making Europeans, etc, pay their agreed share of defending themselves, which isn’t the American way, though until Trump was surely the NATO way.  Killing the arch-terrorist murderer Soleimani was wrong, and they would not have done it. because killing the members of the military of a country that has been at war with America, and killing Americans, since 1979 is somehow a bad thing. They all want Medicare for all, or some other completely controlled government medicine, though not all are admitting that up front, or are saying they’d take it bit slower than Bernie Sanders so as to prolong the misery of Americans and the world as they destroy the global economy at a more sedate pace than Bernie.  Climate change!  We only have…some short number of years until we’re all doomed–doomed, I tell you!–unless we convert to a communist system and destroy the world’s economy, thus preventing climate doom.

The second theme of the evening was taken from The Wizard of OZ:  “Pay no attention to that skyrocketing economy behind the curtain!  The economy is terrible!  The worst ever!  There’s a recession like you wouldn’t believe about to start any minute!  We’re going to fix this terrible economy that is destroying the middle class by raising their taxes, taking away their health insurance, destroying the fossil fuel industry, and spending the country into oblivion!”

To summarize: Americans are all vicious racists, they’re going to destroy the economy to save it, and killing Islamist madmen dedicated to the destruction of western civilization is a very bad thing because TRUMP, and mostly, shut up.  This, to their way of thinking, is what Americans–those rotten racists–are longing for in a president, and what they desire, more than anything, in their government.

It was a debate about nothing.

Not exactly nothing. Each candidate thinks that they’re The One to beat Trump, and said so forcefully. Or in the case of Biden and Sanders, loudly.

But in terms of undoing all the gains made over the last three years, the seven candidates stand as one.

So they have that going for them, which isn’t nice for us.

But as a debate over ideas, it wasn’t a debate at all. Exact same ideas, varying only (and barely) in who would do the mostest fundamental transformation the fastest.

I don’t think that’s an easy sell in an economy with record-high confidence levels.

‘Four more years’ probably has a much nicer ring to it.

And that’s it for tonight, but I honestly can’t wait to drunkblog the New Hampshire results on Tuesday. They can’t all lose, but some of them surely will — and what a thrill that will be.

Racist.  As usual, my impressions of the candidates and their pronouncements:

Gropin’ Joe Biden: It occurred to me Biden is looking, more and more, like the 103 year-old, recently deceased (God save him) Kirk Douglas–without the cleft chin–every day. He only looks as good as he does because his makeup artists use a trowel to apply makeup for debates–Kirk didn’t bother with that in his later years–that and the modern medical miracle of Botox.  He is not aging well on the campaign trail.

He began with the brilliant, election winning strategy of announcing he’s going to be beaten in New Hampshire.  This time, he adopted the Bernie Sanders debating tactic of shouting really loudly, because nothing is more convincing than making your audience wince.  Gropin’ Joe is going to put an end to having to move.  I don’t understand that either, but he’s going to do it because he’s just that kind of guy.  He’s also the kind of guy who wants automatic voter registration when one turns 18 or gets a driver’s license.  As more and more D/S/C ruled states are giving licenses to illegals, this is an automatic “let illegals vote” measure essential to D/S/C electoral success.  Current Americans won’t vote for them, so they’re going to import new non-Americans that will.

Sniffin’ Joe also said D/S/Cs “gotta stop taking the black community for granted.”  This is a bit overdue, since the D/S/C Party has always been the party of segregation, racism, and keeping black Americans under their absolute control with never ending promises, promises they never fulfill.  When it comes to black Americans, Ronald Reagan was right when he said:

The most terrifying words in the English language are ‘I’m from the government, and I’m here to help.’

It’s never so terrifying as when a D/S/C says it.  It might be interesting to bear in mind of the half century or so of taking blacks for granted, Joe and Barack the Messiah are responsible for eight of those, and actually, Joe has been an Olympic class ignorer of black Americans for some 30 years.  Clarence Thomas might have some thoughts on that.  Way to go Joe!

Joe is absolutely sure “NATO is going to crumble if we don’t beat Trump.”  Considering NATO is arguably stronger than ever, just like the economy, that’s another “who you gonna believe, me or your own lyin’ eyes? bit of analysis.

And speaking of military matters, Gropin’ Joe believes the insubordinate, seditionist “that’s Lt. Col. to you, Congressman” Alexander Vindman deserves a medal, not the evil Rush Limbaugh.  Joe even asked the audience to stand up and applaud the wimpy little Vindman, whose boldness extended to subverting the President and interfering with his legitimate exercise of foreign policy, as well as telling a foreign leader how to manipulate the President of the United States.  Isn’t that what military officers swear an oath to do?  By the way Joe, the Medal of Freedom is a civilian, not a military, award. 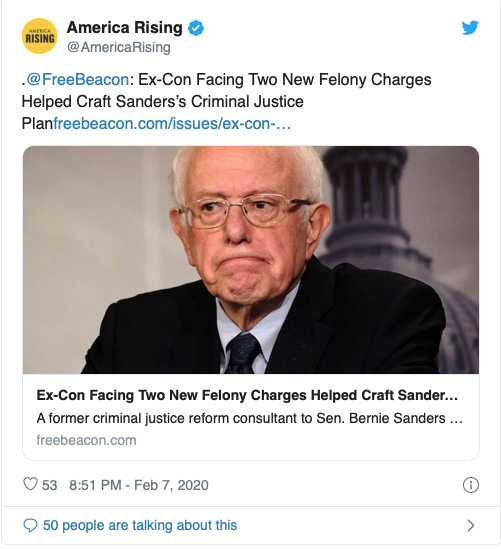 Crazy Bernie Sanders:  Bernie’s default debating posture is to be as angry, loud, wild eyed, wild-haired, and crazily gesturing as it is humanly possible to be.  He fluctuates between “I’m so damned mad I could explode,” to “I’m not going to take it anymore, and I’m going to put you all in gulags!”  He stepped up his insane rage a bit this time.  All that was missing was hand wringing and maniacal cackling.  The USMCA is an improvement over NAFTA, so of course, he won’t support it.  Doing away with bail has been so effective everywhere it has been tried–even Bill de Blasio is actually admitting  it might not have been such a great idea–Bernie wants to take that kind of distinctly D/S/C success nationwide.  He pretty much started the racism ball rolling with “We have a racist society top to bottom.”  If he’s elected, he’s going to pursue Trump to the ends of the Earth.  You know the rest.

Elizabeth “Maybe I’m Not Really All That Indian” Warren: She believes the children are our future.  Actually, Whitney Houston beat her to that one.  And if elected, she’ll pursue Trump to the end ends of the known universe.  Yawn.  She’s in desperation mode, willing and ready to say anything to remain even remotely relevant.  To see the rest of what she said, just enter “debate” in the SMM search bar, and it will take you to the articles on the first seven debates.

Pete “I’m Gay–Have I Mentioned I’m Gay?–And Black People Don’t Really Hate Me All That Much” Buttegieg:  When he was mayor of the 300 and somethingth largest town in America, he didn’t arrest all that many drug dealers because that would be a bad thing if he did.  That’s about it for Pete, who appears almost lifelike from certain camera angles.

Amy “Mean Girl” Klobuchar:  D/S/C pundits are lauding her for sounding nearly sane, and being what passes for moderate among the contemporary D/S/C Party.  She’s from the Midwest, so that means she’s from the Midwest and she understands their pain and wants to inflict more.  She said: “Trump isolates us from the world,” and offered this piece of insightful economic analysis: “you can’t fit $413 million dollars in a coffee can.”  Well no, I don’t suppose you can.  Elect this woman immediately, just don’t work for her.

Tom “I’m Trying Not To Look Like A Deer In The Headlights, Really” Steyer:  Someone must have been working with him to keep him from staring fixedly at the camera.  At times, he too appeared almost lifelike.  He agreed that the candidates “…all agree on literally everything,” which to him is an indication of their great diversity.  There is no amount of other people’s money he is not willing to spend on slavery reparations.  And despite having no political experience, he is certain we need a candidate with experience, and that’s him.  I particularly loved this:

I have had this conversation on this debate stage from these people now every single debate, and they’re all right. Everybody on this stage is better on economic justice and health care than anybody in the Republican Party and a million times better than Donald Trump.

Other than vowing to impoverish Americans and destroy the economy in a few years, he’s absolutely right–and diverse–about that.

Andrew “Won’t Somebody Please Pay Attention To Me” Yang: Yang continues to look very earnest, and also relative sane, in a kind of loopy, “not really paying much attention to reality” sort of way. As usual,  he had little speaking time, and everyone pretty much ignored him.  He said:

He won’t be the political researcher working on that particular cure, which is pretty much doing away entirely with the D/S/C Party and its policies.  Somehow, I don’t think D/S/Cs are going to go for that particular immunization.

We shall have to see whether Mike Bloomberg livens up the party, and by then, how many will remain standing, with the exception of Bloomberg, not, presumably, on boxes (yeah, I know that’s a cheap shot, but he has actually stood on boxes, so it’s fair game).