Many reporters count themselves among the self-imagined elite.  They’re intellectually and morally superior, far more educated, sophisticated, and compassionate than the gun and God clinging, uneducated, unsophisticated, toothless, smelly, WalMart shopping Deplorables of Flyover Country.  You know: Trump voters.  The Washington Examiner shows us the sophistication and compassion of reporters and other talking heads, of the CNN variety:

[Don] Lemon, on Saturday night, dabbed a tissue to dry his eyes as he and two guests mocked President Trump and his supporters as rural southern dummies.

The exchanges came during a segment on the conflict between Secretary of State Mike Pompeo and NPR reporter Mary Louise Kelly, whom Pompeo asked to point to Ukraine on a map.

CNN contributor Rick Wilson charged that ‘Donald Trump couldn’t find Ukraine on a map if you had the letter ‘U’ and the picture of an actual physical crane next to it.’ As Lemon fell forward in laughter, Wilson claimed Pompeo was trying to please ‘the credulous boomer rube demo that backs Donald Trump,’ before he broke into an impersonation to make fun of a Trump supporter: ‘Donald Trump’s the smart one, and y’all – y’all elitists are dumb!’

CNN contributor Wajahat Ali jumped in, also making an impersonation: ‘You elitists with your geography and your maps and your spelling!’

From CNN Tonight with Lemon on Saturday evening:

RICK WILSON: Of course, of course. He’s just trying to demean her, and obviously, it’s false. And, look, he also knows, deep in his heart, that Donald Trump couldn’t find Ukraine on a map if you had the letter ‘u’ and a picture of an actual physical crane next to it. He knows that this is a, you know, an administration defined by ignorance of the world, and so that’s partly him playing to their base and playing to their audience, you know, the credulous boomer rube demo that backs Donald Trump — that wants to think that [does impersonation] ‘Donald Trump’s the smart one, and y’all – y’all elitists are dumb!’

WAJAHAT ALI: You elitists with your geography and your maps and your spelling!

WILSON: Your math and your reading!

ALI: Yeah, your reading, you know, your geography, knowing other countries, sipping your latte!

WILSON: All those lines on the map!

ALI: Only them elitists know where Ukraine is! [ending impersonation] Sorry, I apologize.

ALI: But it was Rick’s fault. I blame Rick. But, in all honesty — 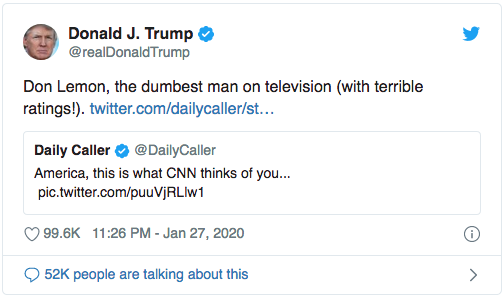 As regular readers know, in my weekly education articles, I explain that it is precisely this kind of “enlightened” thinking that is badly damaging educational opportiunity, particularly for the minorities such people claim to champion and cherish.  Substituting social justice, diversity and eternal grievance, as well as disdain for others, for a competent, classical curriculum is bearing bitter fruit.  My education article for February 3, 2020 will focus on this issue.

It is the non-Democrat controlled portions of the country that produce the best educational results.  The people of Flyover Country maintain and build America and feed, clothe and provide power for soulless empty suits like Lemon, Wilson and Wajahat Ali.  Normal Americans voted for Donald Trump, and will again, because of people like them.  Minorities, including Black Americans, are abandoning the D/S/C Party, because at long last they’ve come to understand it is Donald Trump and the Republicans that actually produce results that improve their lives, and it is people like the talking heads of CNN that lie to, hate and ridicule them.

It’s interesting to note that some pundits are suggesting this vitriol for Normal Americans is only in response to Mr. Trump’s punching back against those that attack him.  As with all ills in the universe, real or imagined, it’s all Trump’s fault! Lemon, Wilson and Wajahat Ali would never behave like such terrible people were it not for Trump, who, living rent-free in their heads, makes them do it.  This might be true, if only people like them were by default, kind and civil, prior to Mr. Trump’s candidacy.  They were not. The Age of Trump has, however, caused D/S/Cs to throw off any pretense of civility and humility.  What we see is what we get: their unfiltered (lack of ) character.

People like Lemon are sooooo sophisticated. Other sophisticates, like the Yale Art Department, are doing away with a long standing and very popular introductory Western art course, because it’s too white, male and not sufficiently gender and sexuality confused.  Obviously, only by doing away with the artistic foundations of Western Civilization can America be improved and preserved. 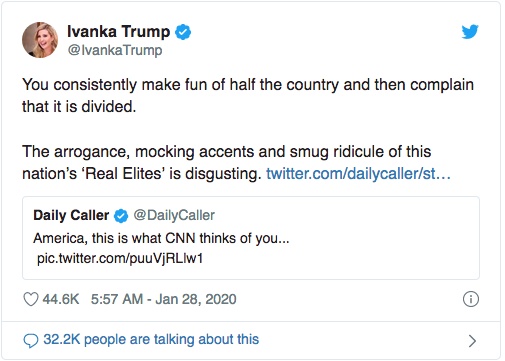 Ivanka Trump is, of course, correct.  These are people who decry America’s division, while doing all they can to perpetuate it.  These are the people who whine about electing socialists to unite America under their benevolent and compassionate leadership, yet they actively hate at least half of her people, the people who work, fight and die to preserve their freedom to expose their shallow and angry character to the world.

These are the people who scorn the Christians of Flyover Country, calling them bigots and haters and ridiculing their belief in God.  They ridicule those who understand that evil exists, and think themselves infallible, yet it is the very Christians they revile in the crudest terms that know all men sin, and are therefore far more forgiving of their fellow man.  Acknowledging a Higher Power tends to instill the humility and patience the self-imagined elite, who have no God but themselves and their political faith, lack.  The stupidity, cruelty and hatred they project on others can best be seen in any mirror.

Consider, gentle readers: Normal Americans are paid for useful, productive work.  People like Lemon, Wilson and Wajahat Ali are paid, and paid obscenely well, to cruelly ridicule others for being decent, moral people.

Oh, they hate Trump, but they hate Normal Americans most, and when they once again gain sufficient power, they’re going to act on that hatred.  If they want more Trump, and more Deplorables, this is how they get them.

PRE-POSTING UPDATE:  Don Lemon has issued a non-apology apology.  Lemon tells us he is not the sort of fellow who belittles anyone for any reason, and that’s not what he was doing, no.  He was just laughing at what Wilson said because he thought it was funny–a joke.  He didn’t even really hear what Wilson said, but it was oh-so funny.

The nature of humor is immutable.  Something is funny–we laugh–when we grasp the irony or ludicrousness of the comment.  If we don’t know what is being said, it’s impossible to identify it as ironic or ludicrous, hence, not funny and no laughter.  Or, if we are cruel, we laugh at the misery or misfortune of others.  I leave it to you, gentle readers, to determine which was the case.

13 thoughts on “CNN: They Hate You; They Really Hate You”