Back in the 1400s when I was still playing cops and robbers, a movement was beginning among police executives and politicians, particularly in D/S/C controlled states and cities.  Noticing that when the police pursued criminals, the criminals sometimes got into accidents, injuring or killing themselves or innocents, they simplistically though that prohibiting cops from pursuing criminals would solve that problem.  The more rational—relatively speaking–among them tried to dance on the head of that particular pin by mandating that officers only pursue criminals suspected of felonies.  The effect of this was to essentially legalize all misdemeanors.  All a criminal had to do to get away with any misdemeanor was simply drive quickly away, committing additional crimes in the process.  Anyone committing a traffic violation could get away with it if they decided to flee.  Some even decided to allow pursuits only for some very specific felonies, but that essentially meant no one could be pursued, as making those kinds of distinctions in seconds in the real world was nonsensical.

Actual cops were disgusted by this, of course.  They knew it meant law breakers would get away, and there was nothing they could do about it.  Should they be foolish enough to actually do their jobs, it would be they, not criminals, in trouble.  Fortunately, this unique kind of police executive stupidity wasn’t wide spread, but it has been gaining in popularity since, and has now hit Atlanta, as local station WSBTV reports:

Atlanta Police Chief Erika Shields sent out a department-wide email notifying officers that the department will no longer chase suspects.

Shields cited the risk to the safety of the officers and the public for each chase, and ‘knowing that the judicial system is largely unresponsive to the actions of the defendants.’

This change comes after last month’s deadly crash during a chase that killed two men.

Channel 2′s Matt Johnson was at the news conference when Shield announced the changes.

‘Please know that I realize this will not be a popular decision; and more disconcerting to me personally, is that this decision may drive crime up,’ Shields said in a memo announcing the change. ‘I get it.’

While she noted that ‘an overwhelming number of crimes are committed where a vehicle is involved’ and that significant arrests often follow zeroing in on a specific vehicle, other factors influenced the decision. 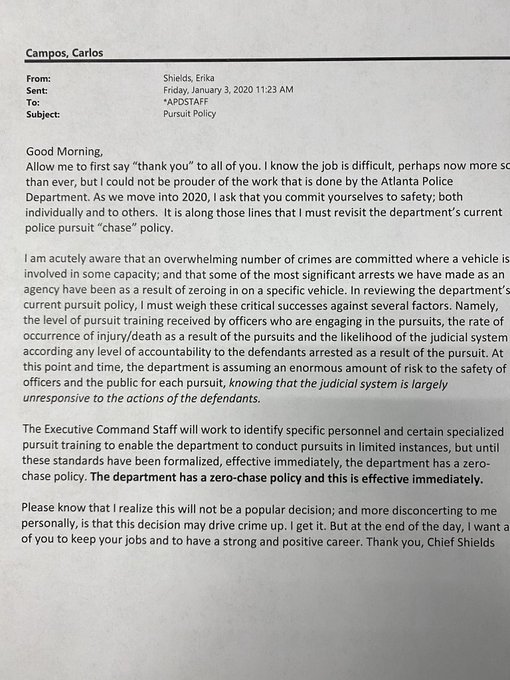 What Shields is saying is criminals drive.  A great many felonies are discovered by officers making misdemeanor traffic stops, then finding drugs, stolen property or other evidence of crimes in crook’s vehicles.

Namely, the level of pursuit training received by officers who are engaging in the pursuits, the rate of occurrence of injury/death as a result of the pursuits and the likelihood of the judicial system according any level of accountability to the defendants as a result of the pursuit. At his point and time, the department is assuming an enormous risk to the safety of officers and the public for each pursuit, knowing that the judicial system is largely unresponsive to the actions of the defendants.’

In other words, the courts, and likely, the prosecutors, didn’t much care about criminals fleeing the police, and were doing little or nothing to them.  This is not an uncommon problem, particularly in D/S/C ruled cities.

Chris Rich, who has lived in Atlanta for about five years, was trying to make sense of the policy decision Friday afternoon.

‘This is pretty drastic,’ he said. ‘If I’m a criminal, it’s open season. It’s going to impact all the law-abiding citizens. It’s worrisome.’

He understands where Shields is coming from, though, and wishes the police department felt more support from other agencies. He knows several police officers and worries about morale.

‘We’ve got these guys working hard, trying to make our streets safe, and then you’ve got this revolving door with these repeat offenders,’ Rich said. ‘I just cannot understand why the mayor’s office is not putting more pressure on the DA’s office or the judicial system. There needs to be a unified front.

This is merely part of the trend of decriminalizing crime.  Contemporary D/S/Cs begin with the position that society is irredeemably racist, and when it’s not incarcerating young Black men for no reason, it’s killing them.  Why, our prisons are full of innocent Black men!  Therefore, the only way to atone for white privilege and supremacy, which is also pervasive, is to open the jails and allow criminals to commit all manner of crimes without consequences.

California, the leader in D/S/C lunacy, is a leader in this as well, essentially decriminalizing misdemeanors, including thefts up to $949.99 dollars.  What could possibly go wrong?   It’s a topic I addressed in California: Really Real Reality, where I spoke of the particular lunacy of San Francisco.  In that article, I wrote, in part:

Reality, like human nature, always asserts itself regardless of good intentions. However, in this case, and where criminals are involved in general, Democrats/Socialists/Communists virtually never have good intentions, though I’m sure many think themselves paragons of mercy and virtue.  They spend a great deal of time virtue signaling about “root causes” of crime, and their theories tend to suggest that when anyone feels oppressed, or unappreciated, or is poor, or a minority, or a member of any other temporarily favored D/S/C victim group, they have no alternative but to resort to crime, this is, due to their hurt feelings, not only understandable, but excusable because racism and Trump.  This being unquestionably true, society must adapt to them, in this case, by decriminalizing actual crime–this while criminalizing things like plastic grocery bags and plastic straws.  They conveniently ignore the reality wherein most people having difficulties in life do not engage in crime.  Were this not real reality, we would have devolved to an anarchic state of nature long ago.

By all means, take the link and read the rest.

Criminals are opportunists.  They’ll do whatever they can get away with.  The larger problem is that a not inconsiderable portion of the population remains out of the ranks of criminals only because they fear the consequences of violating the law.  Even though most crimes go unpunished, the mere possibility they will be caught and punished is sufficient to keep most of these people more or less honest.

Others are driven by addiction.  They need money to feed the demons constantly pursuing them, so they commit quick and easy crimes like shoplifting and vehicle burglaries.  Break a window, grab anything even remotely valuable, and run.  Usually, that kind of crime results in far greater expenses to vehicle owners in repair costs than in the loss of any property.

Keeping this really real reality in mind, what do you suppose will happen, gentle readers, when criminals know they aren’t going to be punished for theft or burglary, and even if a cop is so gung ho as to try to pursue them, all they have to do is speed away?  If you think the consequences aren’t foreseeable, you’re a shoo-in candidate for the California legislature.

In San Francisco alone, car burglary, to say nothing of other crimes, is at epidemic levels:

According to a tracker published by the San Francisco Chronicle, an average of 66 ‘smash-and-grab’ car thefts were reported each day in San Francisco in December. Many more go unreported.

Why?  Because people know the police, if they bother to respond to the call, will no nothing.

According to the LAPD, theft statewide has multiplied to 243,000 recorded in 2018, above the annual average from the previous eight years with 223,000. The department discovered a trend.

Just ask anybody. You know it. We feel it. Crime is really out of control,’ says City Journal contributor Erica Sandberg, who lives in San Francisco and has reported extensively on the city. ‘Whether it’s property crime or even violent crime, it’s scary.

Atlanta has just bought a heaping helping of San Francisco, where crime is actually—it’s not just an idiom or metaphor—out of control.  Chief Shields may be well intentioned, but she, and the politicians likely driving her decision, have just imported a truckload of hurt, San Francisco style, to Georgia.

10 thoughts on “Policing: A Truckload Of Hurt”