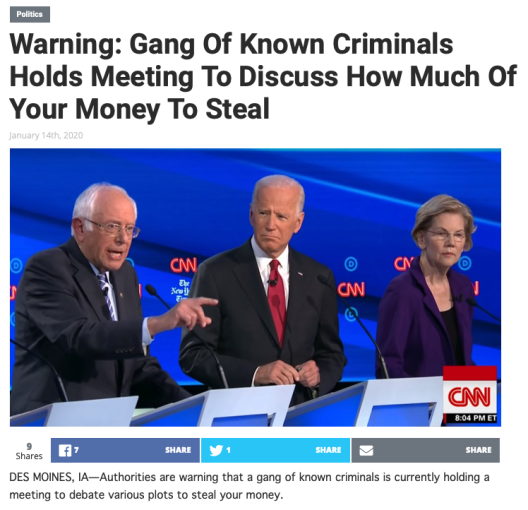 Well, gentle readers, I watched most of it.  President Trump’s rally I mean.  I could only force myself to watch about half the 7th D/S/C debate.  Flipping back and forth, the difference was stunning. 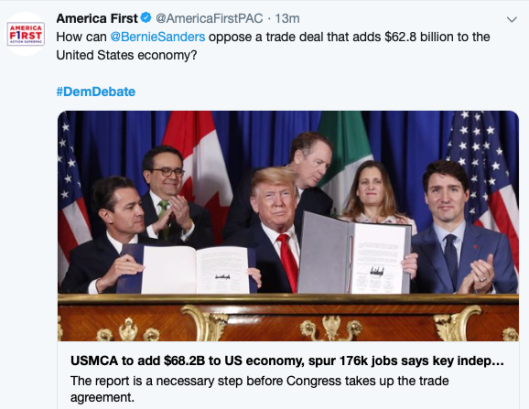 Trump: lively, happy, optimistic, America is great.  D/S/Cs: everything is horrible, grim, and only they can fix it by bankrupting the country and appeasing every enemy we’ve ever had while creating new enemies and managing the decline they’ll create.  One would hope that with only six participants rather than 24 or so spread over two nights, things might be a bit more interesting.  Not so.  In fact, D/S/C pundits, including Van Jones, who called the debate “dispiriting” among other things, were, well, dispirited.  One and all, they worry that none of the uninspiring simulacrums on the debate stage can possibly stand up to President Trump.  To their horror, they’re right.

Holding a rally in Wisconsin, where the D/S/C debate should have been, was brilliant.  Mr. Trump continues to run rings around these people in every way.  The rally was what we’ve come to expect of Mr. Trump: a packed, very enthusiastic house, thousands waiting outside, unable to get in, but remaining—in the cold—to show their support no less enthusiastically than those inside.  The Fox And Friends crew did one of their diner interviews on the Wednesday (01-15-20) broadcast, and a resident made a point I suspect comes closer than most to summing up the widespread support for Mr. Trump: “he keeps his word.”  That’s so rare in a politician of either party, but particularly rare of D/S/Cs.

As we’ve come to expect, all six of the D/S/Cs espoused slightly different versions of leftist orthodoxy 101: free stuff, everything is a human right except the Bill of Rights, more free stuff, Medicare/altered Obamacare/something something for all, orange man bad, really, really bad, war bad, economy bad, women really really good, Iran deal really really good and working perfectly, Trump really really bad and getting us into WWIII any second now, corporations, particularly insurance and pharmaceutical companies, really, really, really bad, and former Mayor Pete still really really gay.  Their first day in office, they’re going to fix pretty much everything by executive fiat.  Iran bad, but in comparison with Trump, good.  The greatest existential crisis—besides Trump—is climate change—still.  Oh, and they’re going to tax the hell out of everybody but you, which will allow them to give you lots of free stuff, like free child care. 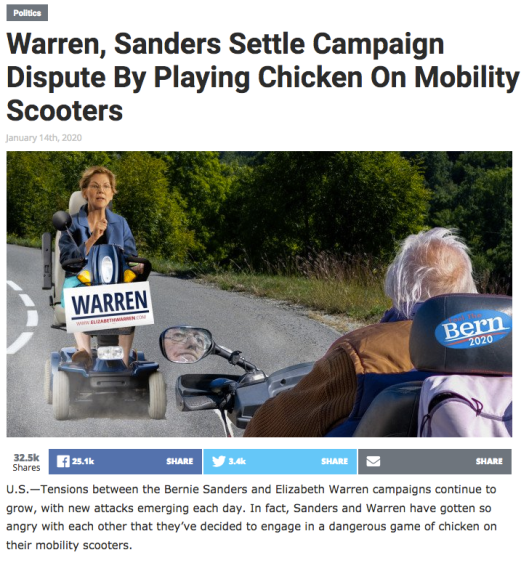 Conspicuously missing was virtually any commentary on immigration.  They’re ceding that one to Trump, at least for now.  The CNN moderators were careful to avoid any really embarrassing questions for the D/S/Cs, except for Bernie Sanders.  They went after him.

The big controversy of the night is Bernie Sander’s alleged comment to Elizabeth Warren in a private 2018 conversation that he didn’t think a woman could win the presidency in 2020.  A CNN moderator—who cares who they were?—asked Sanders if he said it.  He denied it.  They immediately asked Warren what she thought when he said it. 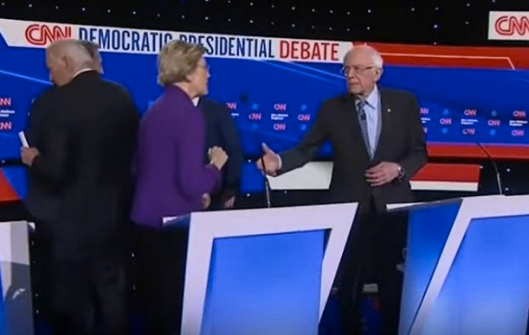 The non-handshake heard ’round the world…

Is the fix in again?  Sanders is eclipsing them all in fundraising, and it appears he could be the nominee.  D/S/Cs are afraid Sanders will get the nomination, or at least put them in the position of having to cheat him out of it again.  They know he can’t possibly beat Trump.  CNN is certainly doing its part to see he doesn’t get the nomination.  After the debate, Sanders extended his hand to Warren, who dodged it.  They had off-mic words, which did not appear to be congenial. 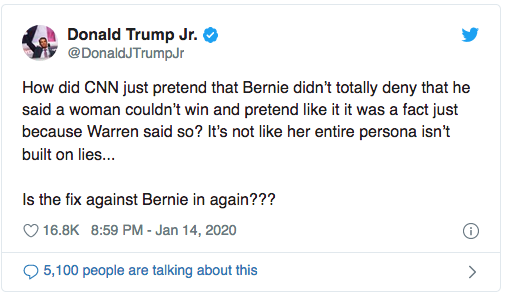 This was the final debate before Iowa, and if Nancy Pelosi gets her way, the Senators will be stuck in DC at an impeachment trial through Iowa and perhaps beyond.  One would think this debate would have had substantial fireworks, but it was as dull as flat white wall paint, and as exciting as watching it dry.  Sanders and Warren, for their obvious acrimony, did not attack each other, nor did any of the other candidates.  No one laid a glove on Biden, and nothing much of interest happened.  On to a few comments about the candidates…

Tom Steyer:  He bought his way on stage.  He continues to have that “I’m just about to go bull goose loony,” “deer in the headlights” wide-eyed stare.  He seems angry, apparently now holding down the Corey Booker “angry black/white man” countenance.  He tried to be the voice of reason, yet said nothing of consequence.  He’s absolutely not going to be the nominee, yet he’s going to spend as much money as necessary to go all the way.  If he’s doing it to ensure his “message” is heard regardless, it’s hard to know just what that message is. 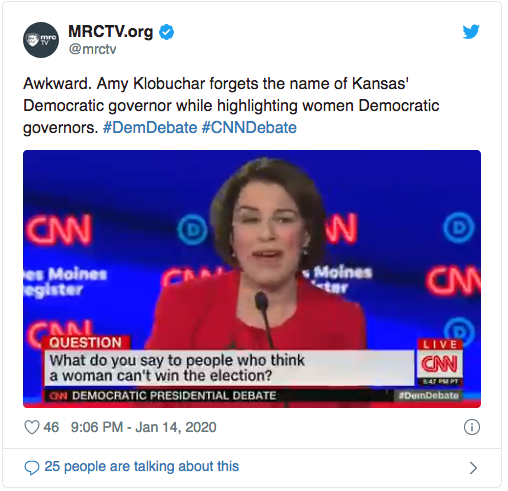 Amy Klobuchar:  She was more lively and smiled more than in the past.  She’s desperately trying to project a “Midwestern, I’m just like you, nice,” persona, and I suspect some will be fooled by it.  Her makeup, like Sanders’, was better than usual, including the bionic eyebrows.  The moderators had to constantly try to stop her as she ran far over her time.  Her ideas are standard D/S/C talking points that sound slightly plausible, while avoiding pinning her down with details.

She’s going nowhere in the polls, and even though some pundits thought she did well, that’s well in comparison to her past performances, which have been mediocre to dismal.  She was a higher grade of mediocre on Tuesday, seeming almost occasionally sensible in comparison to the others. 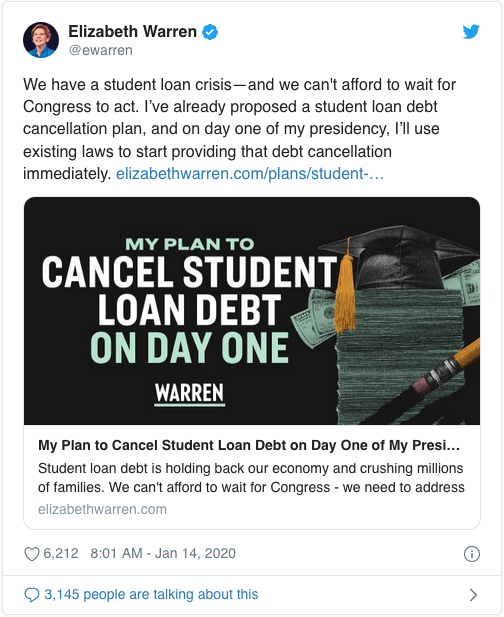 Elizabeth Warren:  She continues with her wild-eyed, frantically loud, “I am woman, hear me roar” persona.  She’s a winner because she narrowly won a couple of elections in Massachusetts where a used Kleenex could win as long as it had a “D” after it’s name.  For the moment, she’s declining in the polls, and her performance didn’t do anything to help reverse that decline.

Pete Buttegieg:  He was in his best, “I’m a completely calm gay Boy Scout” mode.  He’s a veteran, you know.  And did you know “Our party should no longer hesitate to talk about the issue of the debt and the deficit. We’ve got a dramatically better track record on it than Republicans do.”  I seem to remember something about Barack Obama, in only eight years, running up more debt that every president before him, but I’m Deplorable, so what do I know?  Pete tried to position himself between the raving communists and faux-moderates, with calm, policy wonkish commentary.  Everything is a problem and only Pete can solve it.  He’s the guy that is going to bring America together behind his anti-Christian/pro-LGBTQWERTY leadership. 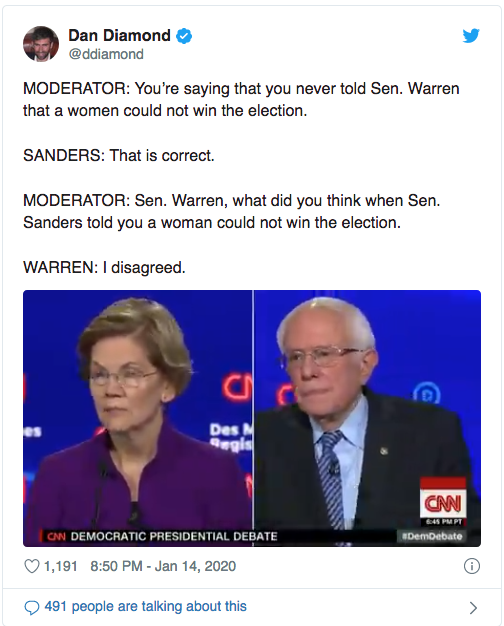 Bernie Sanders: He must be getting serious, or he’s listening to his makeup people for a change: his hair was actually combed, and must have been slicked down as it didn’t go flying off in all directions like an explosion in a spring factory, as usual.  Wild-eyed, angry, wildly gesturing, he’s more sure than ever of the glories awaiting America if only he has the opportunity to impose communism, which he calls “democratic socialism.”  What an oxymoron.  He was specifically asked how much his Medicare for all would cost, and he dodged it, as usual.  Like Warren, he’s going to tax everybody—except the middle class—which will enable him to give you free medical care. 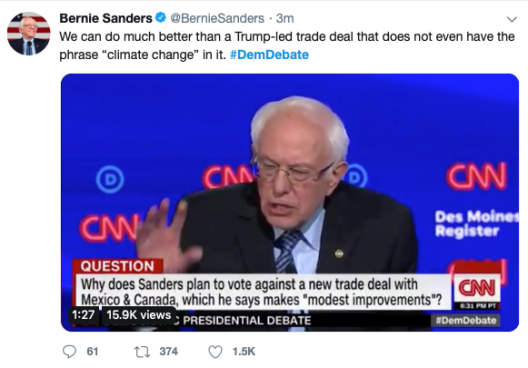 Oh yes, he won’t vote for the Canada/Mexico/US trade deal because the words “climate change” are not in it.  I’m not kidding.  Trade and Climate change, to Bernie’s way of thinking are inextricably intertwined.  He continues to faithfully court the Che Guevara vote.

Joe Biden:  Gropin’ Joe’s campaign has taken to depicting him in Ray Ban aviator shades, a ball cap and a leather pseudo-pilot’s jacket.  That sort of makes him look a bit younger and potentially more virile.  Not as virile or pilot-like as George Bush, who was an actual fighter pilot; oh, how D/S/Cs hated the sight of him in full pilot regalia on that aircraft carrier. 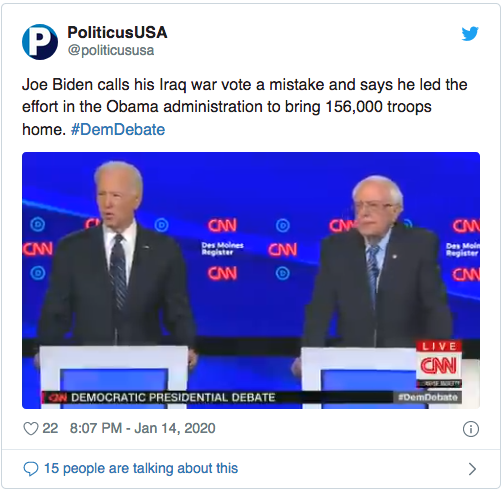 He was against the war in Iraq after he was for it.  He continues to look every day of his advanced age.  He is now being judged not on how well he does, but on how much he avoided looking really bad.  His speech, as always, was a bit confused, rambling within single sentences and paragraphs.  I’d hate to have to grade one of his essays—there wouldn’t be enough red ink.  At one point he forget the name of dead Iranian terrorist general Soleimani. Pundits have taken to grading him against his previously disastrous debate and public performances.  By that measure, he did a bit better tonight, and none of the others attacked him.  He continues to look very old and tired, and he’s far from sharp.

Despite his claims to be more than ready to take on Donald Trump, who Joe thinks fears him, any rational person knows Gropin’ Joe would be slaughtered—figuratively, of course—in a debate with Trump. 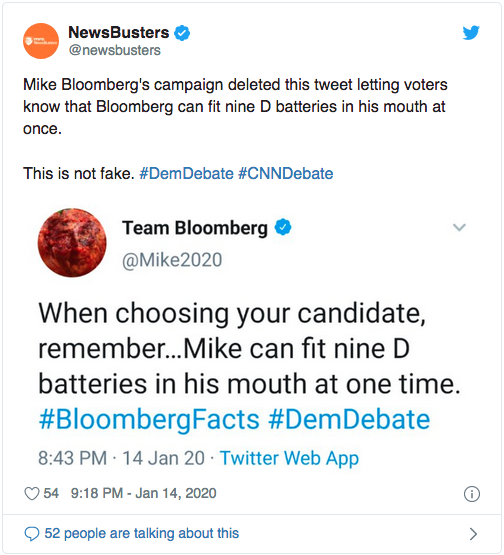 The Message: They’re going to take America into a tailspin, but they’re uniquely qualified, the only people really, to effectively manage the decline.

The Winners:  Donald Trump, and in a brokered convention, Michelle Obama.  You don’t think all this piffle about females winning the presidency refers to Elizabeth Warren or Amy Klobuchar, do you?

Now if you’ll forgive me, I have to get some rest.  Watching this level of dull and stupid for two hours on and off is taxing.