Oh yes, we indeed want to listen to “climate” activists:

In western Massachusetts, a group of a dozen or so climate activists tried to stop a trainload of coal heading for a power plant in New Hampshire…by standing on the railroad tracks in front of the train. Evidently they thought the train could, and would, screech to a halt. This short video is dark and doesn’t show much, but it conveys some sense of why this was a poor idea…

Amazingly, this apparently happened at night (!?)  This is real Darwin award stupidity.  Just for the records, how quickly can a freight train stop in an emergency?  The Minnesota Safety Council explains:

Trains can’t stop quickly or swerve. The average freight train is about 1 to 1¼ miles in length (90 to 120 rail cars). When it’s moving at 55 miles an hour, it can take a mile or more to stop after the locomotive engineer fully applies the emergency brake…According to the National Safety Council:

*A lightweight passenger car traveling at 55 miles an hour can stop in about 200 feet in an emergency—under perfect conditions—that is, if tires and brakes are in good condition and the road is dry.

*A commercial van or bus will need about 230 feet to stop.

*A commercial truck/trailer can stop in about 300 feet—that’s the length of a football field.

*Compared to this, the average freight train we mentioned above traveling at 55 miles an hour may take the length of about 18 football fields to stop.

Notice that these statistics do not take into account a fully loaded coal train, which can stretch to a mile or more in length.  Such trains aren’t “average,” and take considerably longer to stop–inertia being a science thing, and all that.  Simply put, standing on railroad tracks—in the dark—in an attempt to make a political message is suicide, and these are the people screaming their opponents are science deniers?

What edition of Too Stupid To Survive would be complete without Bernie Sanders?

The most telling reaction comes from senator and Democratic presidential candidate Bernie Sanders. The wannabe socialist dictator writes on Twitter that, if he wins, he’ll ‘pass a Green New Deal, and criminally prosecute the fossil fuel executives who destroyed the planet.’

And this from Bernie:

And on the brave new frontier of trans irreality:

If the far left-wing American Civil Liberties Union (ACLU) was ever a serious organization fighting to defend and preserve individual rights and civil liberties, those days are long gone now.

Their latest cause célèbre is by no standard a serious civil rights issue, rather the result of the ever-increasing influence of the radical LGBTQ lobby, which is pursuing the most insane ideas under the guise of civil liberties. The ACLU’s latest cause isn’t about equal justice or discrimination, but calling for tampons to be provided in men’s restrooms. That is one issue that’s part of their ‘menstrual equity’ platform calling for ‘accessible and affordable period products.’

‘We don’t need to erase trans or non-binary people to show that barriers to menstrual equity, such as the tax on menstrual products, are unconstitutional sex discrimination. This tax targets a bodily function associated with women for less favorable treatment. It relies on sexist ideas that women’s needs are frivolous and unnecessary. It is irrational, and it directly affects cis and trans women, trans men, and non-binary people. It’s unfair, unconstitutional, and illegal.’

Right. That’s the 93rd amendment, specifying all men are women and all women are men and neither exist.  Because what real man doesn’t want to menstruate?

And of course, Gropin’ Joe Biden always figures prominently in any TSTS article: 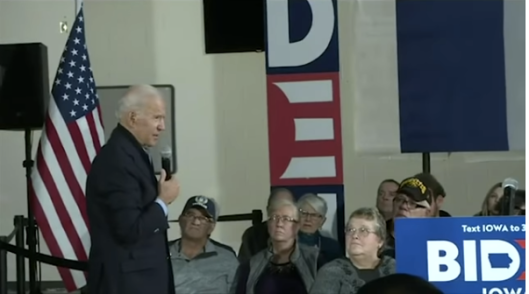 During a question and answer session, a young man asked Biden about his support for Obamacare:

‘I just need this question. So we’re going to take a trip back 2008 real quick. During the run-up to the passage of Obamacare, President Obama promised my father that if he likes his plan, he can keep his plan, and that his insurance will be cheaper. After passage, his plan was no longer allowed and his insurance costs doubled. Since you supported the plan, were you lying’ to my dad? Or did you not understand the bill you supported?

Biden waffles on for a while before getting sort of closer to the point of the young man’s question.

‘Well, because people, there’s two ways people know when something is important. One, when it’s so clear when it’s passed that everybody understands it – and no one did understand Obamacare, including the way it was rolled out.

Thank goodness we have diversity officers.  I wonder how much this guy (?) (girl? Something else?) makes? 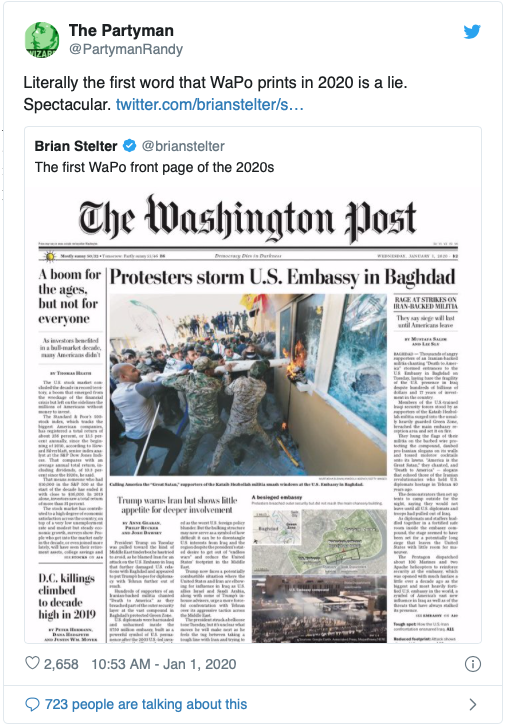 Nor does the New York Times:

And we’ll close this edition with Michael Bloomberg’s brilliant idea:

Of course, because a President Of The United States doesn’t need privacy, nor do members of his staff.  After all, Hillary Clinton began the tradition of sharing American secrets with the world via an unsecured e-mail account.  Why not go whole hog and skip the e-mail entirely!  Let everyone in the room know what everyone else is doing and every secret available!  It would be so much easier for the media to betray American national security that way.  Everybody in the room would have so much more to leak!

Too stupid to survive–us, if we vote for anyone like this.