Finally.  Finally an American president demonstrating to the world there are real consequences for attacking America and Americans.  As Fox News and others have reported  Iranian General Qassem Soleimani, the Iraqi terrorist leader responsible for the attack on our embassy, and several other top ranking terrorists were killed in what appears to have been a drone strike near Baghdad’s airport on 01-02-20.  Iran’s top murderous mullah’s threats didn’t work out so well for him:

Soleimani was the commander of Iran’s so-called “elite” Quds Force, which Iran has used to export terrorism across the Middle East and around the world.  He, and Iran, are directly responsible for the deaths of more than 600 American troops, the wounding and maiming of countless more, and the maiming and deaths of thousands of Iraqis and others throughout the region.  It must also be remembered that Iran was directly responsible for the deaths of hundreds of Americans even before 9-11.

Soleimani was mourned by prominent Islamists: 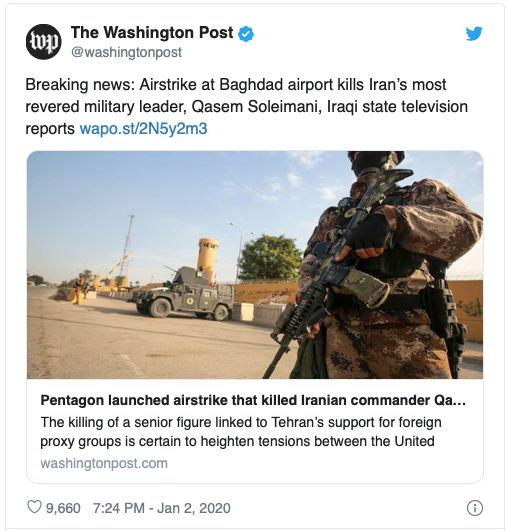 So revered Iraqis were dancing in the streets at the news of his all too timely demise.  But why now?  Soleimani has been wreaking havoc for decades.  Secretary of State Mike Pompeo explains:

Pompeo said the strike was carried out to prevent an “imminent attack” by forces directed by Soleimani.

‘He’s got hundreds of American lives and blood on his hands. What was sitting before us was his travels throughout the region, his efforts to make a significant strike against Americans. There would have been many Muslims killed as well, Iraqis and people in other countries. It was a strike that was aimed at disrupting that plot, disrupting further aggression and we hope, setting the conditions for de-escalation as well,’ he said. 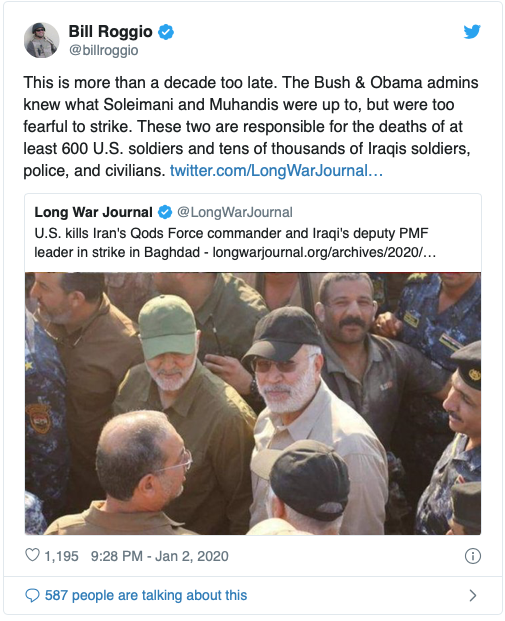 Pompeo stressed that the Trump administration has shown military ‘restraint’ in the face of dozens of attacks directed by Iran and its proxies against American interests, culminating in the death of an American contractor in Iraq last week.

‘I think the Iranian leadership understands President Trump will take action. … We made very clear that these responses would be swift and decisive. We have now demonstrated that. I hope the Iranian leadership will see that and see American resolve and that their decision will be to de-escalate and take actions consistent with what normal nations do. In the event that they do not and they go in the other direction, I know that President Trump and the entire United States government is prepared to respond appropriately,’ said Pompeo.

President Trump made this abundantly clear after the attack on our embassy.

Pompeo said Trump has taken a ‘fundamentally different’ approach to dealing with Iran, arguing the country was emboldened by the softer policies of the Obama administration.

‘We didn’t send pallets of cash to the Iranians. We didn’t pay for hostages. We didn’t create a deal which would have given them a clear pathway to a nuclear weapon. We have taken a very different approach. We believe it’s the one that will ultimately lead to success and stability in the Middle East,’ he said. 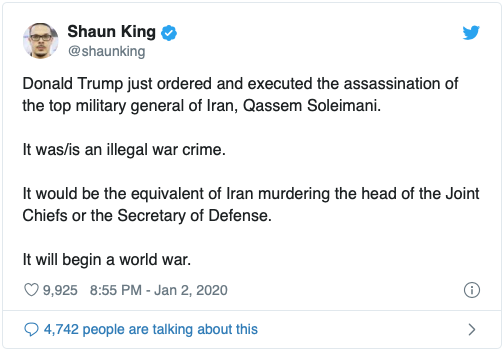 Are they right?  Could this lead to a world war?  Was this an assassination of a foreign leader?  A war crime?  An act of war?!

It was Osama Bin Laden that expressed a fundamental tenet of Middle Eastern/Islamist thought: people will support the strong horse.  It is Islamists that rule Iran, the world’s primary state sponsor of terrorism.  Fueled by cash and protection provided by Barack Obama, Iran has been stymied only by Mr. Trump’s sanctions.  Until now, Iran has believed America would not strike back in any significant way, and as Secretary Pompeo noted, Mr. Trump’s responses to continuing Iranian aggression have been limited and restrained.  These are people who understand only strength.  Weakness inspires them to new outrages; strength forces them to be cautious.

D/S/C congressweaklings are upset because Mr. Trump did not “consult” them, or get their permission before acting.  This too, is an encouraging sign.  Talking to Congress would surely have ensured leaks that would have allowed Soleimani to escape, and/or cost the lives of our troops and allies.  D/S/Cs in Congress are absolutely untrustworthy, and will do anything they can to harm President Trump regardless of the consequences in lives or American power, prestige and national security.  Every day, more and more, they reveal their true loyalties.  They are not to Americans or America. 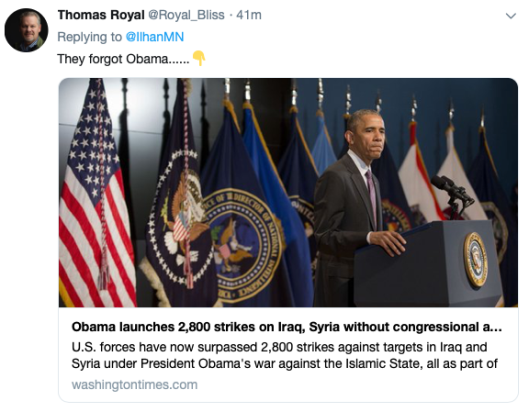 It must also be remembered that Iran declared war on us in 1979, and has never rescinded that declaration, quite the opposite.  Iranians don’t chant “death to America” merely because they like the sound of it or it rhymes in Persian. Iran has been carrying out that war since, and most American presidents since have more or less behaved as though we were not at war.  In war, commanders get killed, which is a risk all combatants take.  Killing an enemy commander is not illegal, immoral, or in any way wrong.  Iranians and their domestic and foreign supporters ought to count themselves lucky we haven’t decided to respond, to this point, as though we’re fighting a war.  Their luck has run out.

Consider also the “logic”–such as it is, of the weaklings who cry we must not provoke the Iranians because they’ll get really mad if we do.  We must not kill Islamist madmen who believe it’s their religious duty to murder every American and Jew and conquer the world, people who are continually killing our people, our allies, and keeping the Middle East in flames, because it might make them mad?!  We must not kill barbarians who are killing us because if we do, they will kill us?  They’ll hate us more and kill us more than they’re already doing?  By this “logic,” we dare not protect America, enforce her borders or in any way do anything that might make the most vicious, murderous regimes mad at us.  This from the seditionists who whine President Trump has no coherent foreign policy. 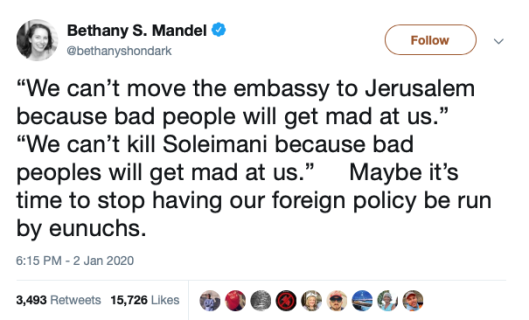 But Trump promised to get us out of unending wars!  He’s a hypocrite!  Actually, he’s acting as any competent American president must.  He’s serious when he says there will be no Benghazis on his watch.  He also recognizes Iran must be stopped, and stopping Iran is in our national interests.  Note that many in the media and D/S/C ranks were upset Mr. Trump didn’t allow our embassy to be overrun and our people killed as Hillary Clinton and Barack Obama did.  That would have given them ammunition to use against Mr. Trump, and no matter what he says or does, it’s wrong and dangerous and will be used in endless impeachment investigations unless Republicans gain complete control of Congress in 2020.

Is this dangerous?  Of course it is.  We’re dealing with madmen, religious zealots who are working feverishly to obtain nuclear weapons, which they will use against Israel and us.  It would be nice indeed if the Iranian people could rise up and overthrow their insane rulers–most Iranians like America and hate their insane despots–but the despots have all the guns (perhaps there’s a lesson in that?) and they’re jailing, torturing and murdering their own people in endless numbers.

The mad mullahs surely know if they provoke an all-out war with us, they’ll all be killed and their reign ended.  We don’t need to kill them, only turn their own people loose on them.  However, they are theocratic madmen.  They are likely to want to go out in a blaze of deranged martyrdom, taking millions with them.  The only way this could devolve into a world war is if Russia and/or China took the part of the Iranians.  This is possible, but unlikely.  Their involvement to date has primarily been to annoy us, not to secure meaningful strategic objectives.  The mad mullahs now know there will be real consequences to their provocations. There will be consequences, personal consequences.

We may well have reached the point where we have no choice but to affect regime change in Iran before they can obtain the nuclear weapons they will surely use against Israel and us.  How do we know they’ll do that?  They keep telling us they will, every day.  We’d be idiots–D/S/Cs–not to believe them.  Donald Trump has spent much of his first term in office cleaning up after Barack Obama, whose fecklessness and all-consuming narcissism have led us to this point.  We’re going to have to take on the Iranians sooner or later.  Better to do it when we have the overwhelming advantage, and don’t face a nuclear threat in the bargain.  Deal with Iran on our timetable, when we have the advantage, not on theirs. 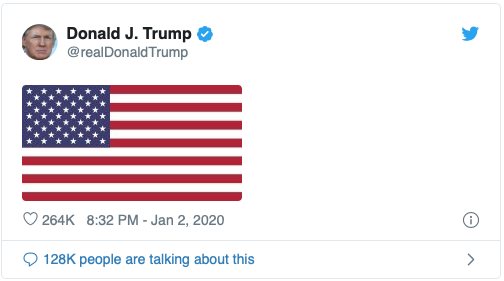 There is no contradiction in wanting to end wars and remove our troops from parts of the world that do not involve our national security interests, and preventing and ending threats from an implacable enemy that has already slaughtered innumerable Americans and threatens to slaughter far more.  In fact, that’s exactly what we elect presidents–commanders in chief–to do. 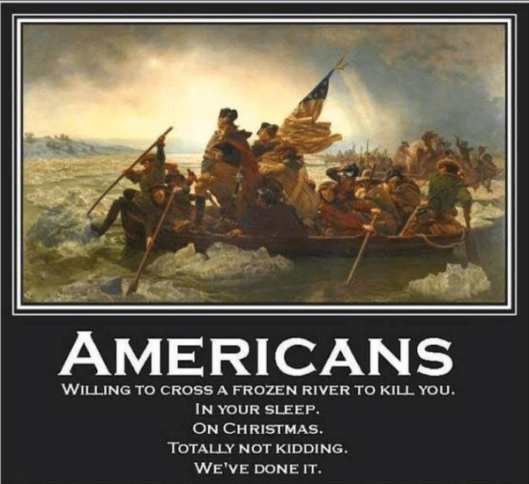 Mr. Trump, who is wisely loath to get us involved in foreign wars, has no foreign policy?  “Mess with us and we’ll kill you,” is a good start.  It’s about time the strong horse took the lead.

UPDATE, 01-03-20, 1750 CST:  Considering the importance of this news, how did CNN report it?  Their reporting focused on the apparent fact that when news of the strike was announced, Mr. Trump was at dinner with friends, and was eating–wait for it–ice cream.  That says it all, but not about Mr. Trump. 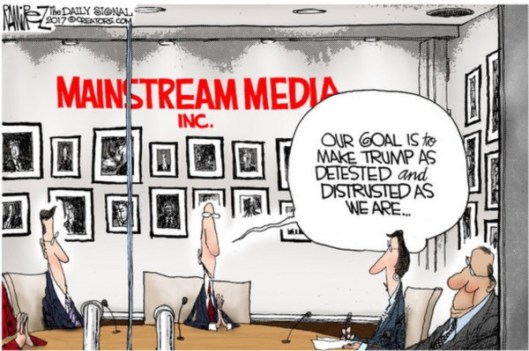 And by all means, read this by my favorite Bookworm.

9 thoughts on “Iran And Trump: Return Of The Strong Horse–UPDATED”