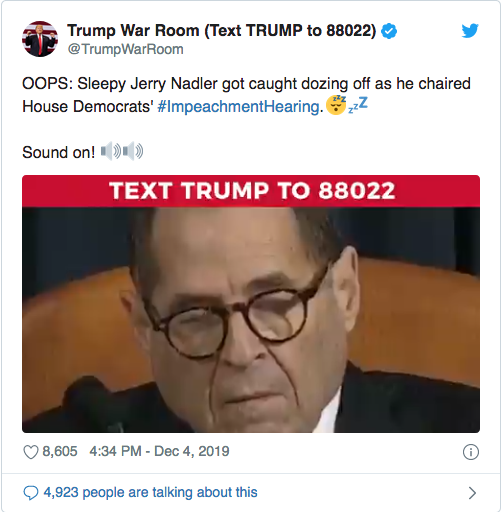 As the impeachment circus grinds laboriously on, all of the worst excesses of the D/S/C Party have been paraded for all to see.  Even Judiciary Committee Chairman Gerald Nadler couldn’t manage to avoid nodding off. 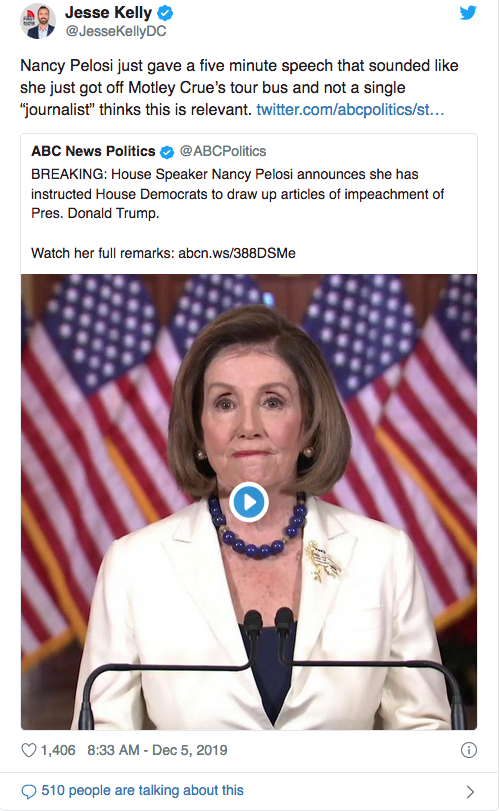 Nancy Pelosi gave a brief speech where she once again expressed humility and offered prayers because D/S/Cs have no choice but to impeach the President.  Ms. Pelosi is clearly having more and more difficulty speaking.  She is having real difficulty with consonants, and in this speech, was slurring words together.  The media, of course, is ignoring this alarming display, to say nothing of failing to comment on Pelosi’s sudden displays of public faux-piety.  Take this link to PJ Media to see for yourself, gentle readers. 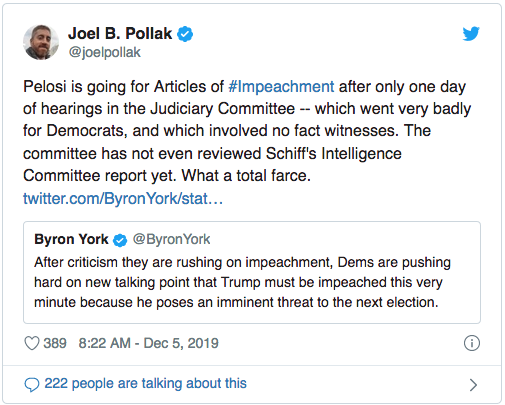 Many commentators, including some D/S/C media propagandists, suggested that particularly after the latest hearing debacle, Pelosi would take the wise course, and abandon impeachment “for the good of the country.”

Yeah.  Not so much. Pelosi said she was ordering the Congress to impeach Trump.  Former Special Counsel Ken Starr was not impressed:

It’s an outrage to seize control of the deliberate process of a committee — [it] simply compounds a series of very, very terrible abuses,’ he said. ‘The House Judiciary committee with its incredibly rich history needs to go into… an open session and debate this.’

‘Where did she get this power?’ Starr asked. ‘I am honestly surprised. Then again, why shouldn’t I be surprised? Because back early in the fall, she unilaterally with no debate in the people’s House says, ‘we now have an impeachment inquiry.’ Now she’s dictating the committee to actually draft articles of impeachment? It is an abuse of power.

Pelosi’s speech was delivered in the aftermath of the first day of hearings before the Judiciary Committee, wherein three handpicked “constitutional scholars” opined that not only should Trump be impeached, but it would be treason toward the Constitution were he not.  All three were D/S/C partisans who not only have donated exclusively to D/S/Cs, all have aggressively lobbied for impeachment and/or demonstrated insane hatred of President Trump in a variety of ways.  Perhaps the most insane was one Pamela Karlan, as Patricia McCarthy at The American Thinker reports: 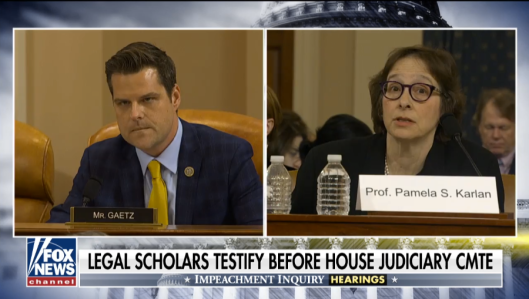 What would be hilarious if it were a SNL skit was the ‘testimony’ of Pamela Karlan, a venomous anti-Trump law prof at Stanford, which does not speak well for Stanford.  She was on a short list of Hilllary’s picks for SCOTUS so it is a safe bet that she is angry that HRC lost.  She has been onboard every anti-Trump campaign from the day he won the election. The same goes for Feldman and Gerhardt; they are each on record in favor of impeachment long before President Trump’s conversation with the president of Ukraine.  Bottom line? Each of them is a radical leftist plant and Nadler, House Intelligence committee chairman and impeachment master Adam Schiff and House Speaker Nancy Pelosi think the American people are so stupid they will be fooled by what they saw on Wednesday.  They are not that stupid.  These impeachment junkies have guessed wrong.

Karlan was the most egregiously partisan and thus the most entertaining.  Her arguments in favor of impeachment were laughable.  She was so annoying she made Elizabeth Warren seem warm and fuzzy.  She is on record in favor of impeachment from day one.  That Stanford employs this woman is not comforting.  That Harvard employs Feldman is distressing.  Karlan made what she clearly thought was a clever joke about Barron Trump’s name.  How low will they go?  This low.  Gutter low.  Karlan’s career should be over as of Wednesday for she is not a teacher, she is a propagandist.  Her students will not be taught to grasp the wisdom of the Constituion, they will learn to dismiss it as a document written by old white men.  Karlan and her fellow travelers are a menace to society.

Karlin is the distinguished constitutional scholar who has actually said she once crossed the street rather than walking on the sidewalk past a Trump hotel.  She was also on Hillary’s short list for the Supreme Court.  After a break during which someone obviously got to her, she delivered an exceedingly weak pseudo-apology, while simultaneously taking another swipe at Mr. Trump.

All D/S/Cs had to do to have a chance to win this election cycle was not be blatantly, publically crazy.  They couldn’t even manage that, as Rep. Al Green so amply illustrated: 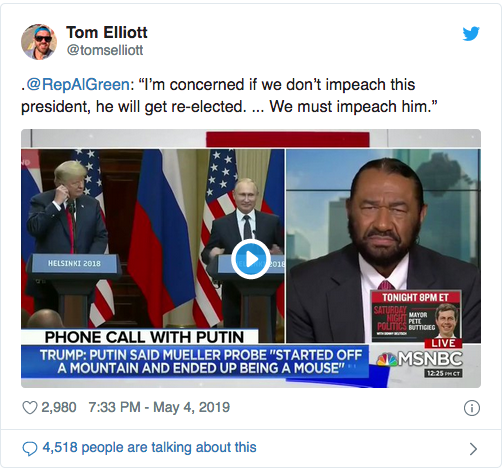 When President Trump took Green to Twitter task for that forecast of D/S/C intent, Green, who had to know there was actual videotape of him saying it, responded: 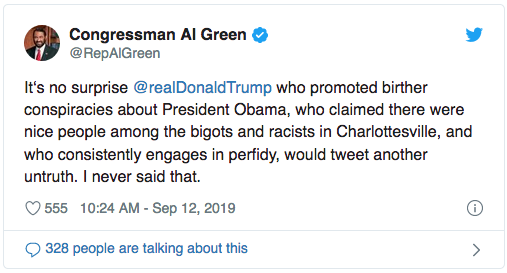 Green went even further out on the loony limb with this: 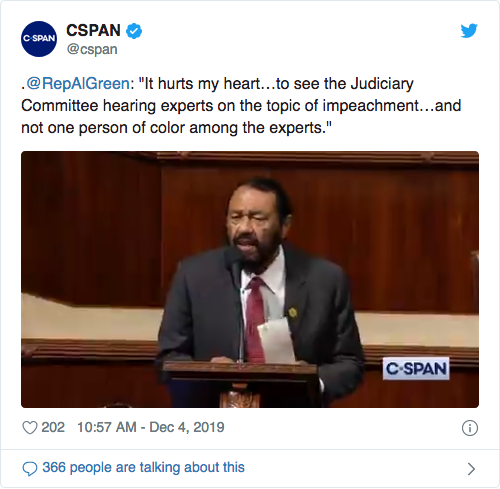 Resorting to race is, of course, the D/S/C’s default position.  What Green apparently fails to appreciate, and the media will never report, is it was the D/S/C committee chairs that chose those three witnesses, so apparently, D/S/Cs are racist.

The insanity continues in the presidential race, in the aftermath of Kamala Harris ending her doomed campaign: 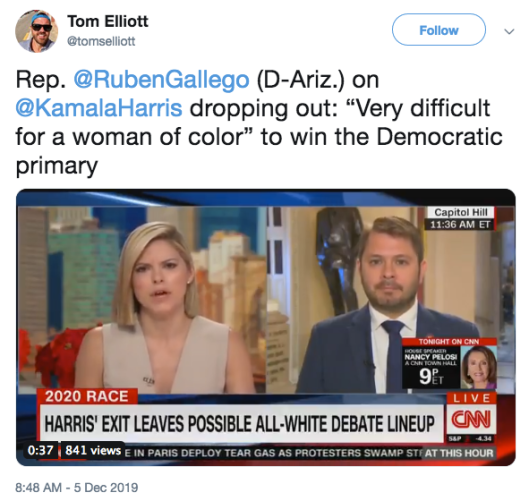 Obviously, the only possible reason Harris had to drop out must be racism.  The fact she ran a terrible campaign, did poorly in the debates, and even black women didn’t want to vote for her can’t possibly have anything to do with it.  Cory Booker, who is polling in the low 2% range, is also upset: 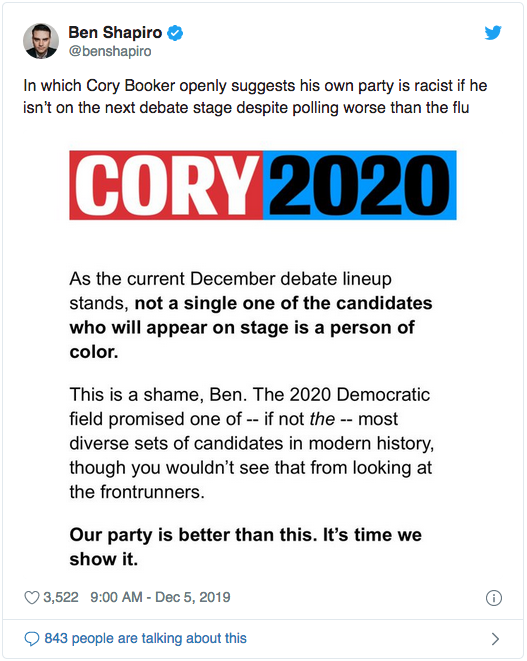 Of course, he’s more upset he’s not qualifying for the next D/S/C debate.  And he’s not quite right; Elizabeth Warren is an Indian, so there’s plenty of diversity available.

The Intelligence Committee’s impeachment report, which was released only the night before the Judiciary Committee’s hearing, so none of the Representatives had a chance to read it, contained no surprises, other than the fact that Adam Schiff subpoenaed phone records of Republican Congressmen and reporters:

And the crickets continue chirping.

Weren’t D/S/Cs supposed to be all about transparency?

President Trump is quite right about this: 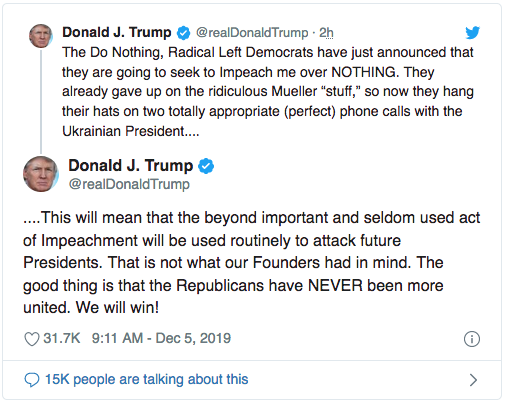 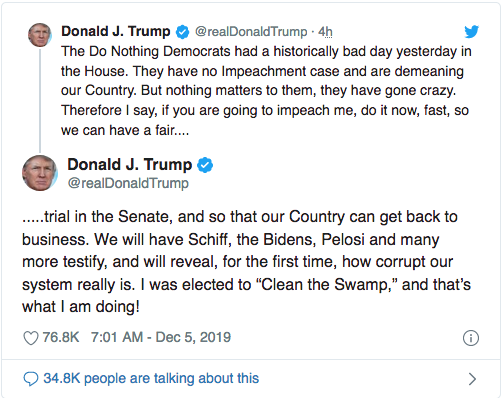 D/S/Cs are now apparently desperate to impeach President Trump before Christmas.  As I’ve previously noted, they know their actions will hamper the efforts of their presidential candidates, and the Senate will either simply dismiss the charges, or will hold a trial, but D/S/Cs are irrevocably in the grip of Trump Derangement Syndrome.  One must never underestimate the ability of Republicans to snatch defeat from the jaws of victory, but one can hope they will hold a trial, and like the D/S/Cs, play political hardball, forcing Adam Schiff, the supposed whistleblower, Gropin’ Joe and Snortin’ Hunter Biden to testify.  It would be a golden opportunity to expose a great many secrets D/S/Cs do not want exposed.  Unfortunately, many Republicans are likely also involved in things they don’t want exposed.  This may be the D/S/C calculus.  They may have inside information Republicans will simply dismiss the charges “for the good of the nation,” which will allow D/S/Cs, for the next year or five, to scream Trump was impeached.  This, they surely believe, will help them defeat him in 2020, and if not, will give them a handy excuse to continue to resist, slander, and refuse to cooperate with him “for the good of the nation.”

Swamps are drained slowly and incompletely, if at all, and the swamp dwellers are resisting the best efforts of normal Americans to take back the Republic.  They know another Trump term would result in more drainage.  We will soon see just how far Republican assertions of democracy, transparency and virtue go, all for the good of the nation, to be sure.

3 thoughts on “Trump: It’s Different When Democrats Do It 10–For The Good Of The Nation”