During the Obama years and thereafter, I have not bothered to reflexively attack Michelle Obama.  My occasional notes of her related to the media’s insanely tongue-bathing reviews of her 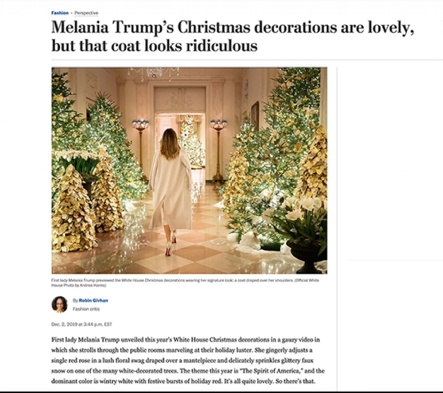 clothing, her arms, and her sun-bright wonderfulness.  I also wrote when her totalitarian impulses were given full flower as she starved school children across the nation by mandating what they were allowed to eat, causing the waste of tons of unpalatable food kids just couldn’t stomach.  I refrained from attacking her simply because she was married to Barack Obama.  I even gave her credit where credit was due.

I generally ascribe to the view that criticism of the families of politicians is out of bounds, unless of course, they put themselves into play on the political battlefield, as Hunter Biden recently has.

The media, however, has not been so kind toward the First Lady, Melania Trump. Normal Americans tend to see her as not only beautiful and elegant, but classy.  As a former successful model, she wears clothing with a model’s grace, and looks glamorous indeed.  She has also been essentially apolitical, and has, in her public appearances, demonstrated nothing but intelligence and graciousness.   She has, to date, appeared on a single magazine cover, while Mrs. Obama regularly graced magazine covers, to say nothing of the innumerable drooling articles and interviews on their interiors.

It’s Christmas time again, and yet another opportunity for the media, led by The Washington Post, to attack Melania Trump, as Fox News reports:

After skewering Melania Trump’s holiday decorations in the past, The Washington Post has this year approved of her White House decor, and decided instead to criticize the former fashion model’s appearance in a widely mocked piece on Tuesday that labeled the first lady’s jacket ‘ridiculous.’

The Post, which called last year’s decorations a ‘nightmare forest,’ spent a single paragraph complimenting this year’s “lovely” edition before pivoting to disapproval. 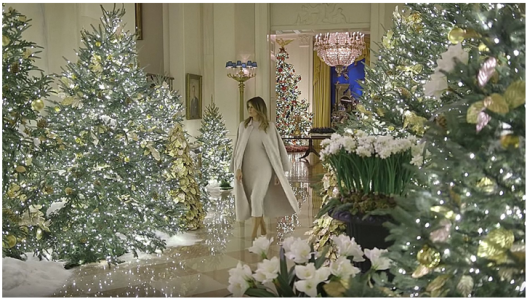 ‘For her tour, Mrs. Trump wears all white: a dress with a simple jewel neckline, white stiletto-heeled pumps and a white coat. The coat is draped over her shoulders as she strolls through the White House,’ Givhan wrote. ‘The coat looks ridiculous.’

The fashion critic said ‘the coat is a distraction’ and ‘a discomforting affectation taken to a ludicrous extreme.’

‘It has become an annual holiday tradition for the media to attack all that the First Lady does,’ Grisham said in a statement to Fox News. ‘If this was a Democratic Administration, I suspect Mrs. Trump and her work would be featured positively in every mainstream news outlet.’ 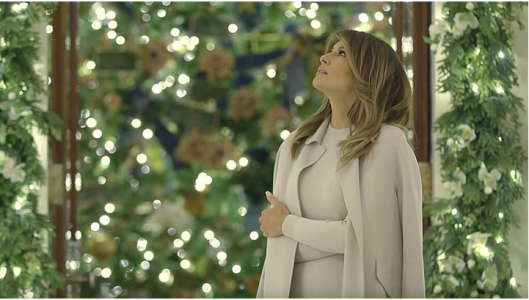 Givhan added that the first lady has ‘styled herself in a manner that contradicts’ claims that she is an ‘engaged hostess who sweats the details and frets about her guests’ comfort,’ instead appearing like someone who would greet “guests at the front door, tells them to remove their shoes and warns them not to sit on the Lalanne sheep.’

I suspect, gentle readers, you, like me, gazing on Mrs. Trump’s attire find it lovely, feminine and classy.  She wears it well, which is surely what so enrages Givhan and other carping media ankle biters.   They aren’t tall, beautiful, and intelligent.  Mrs. Trump speaks five languages and is a successful businesswoman in her own right.  On this occasion, social media blowback against the WaPo has been immediate and overwhelming, as this comment from Lisa Boothe notes:

Yes, and his children too.  This too is a pertinent point: 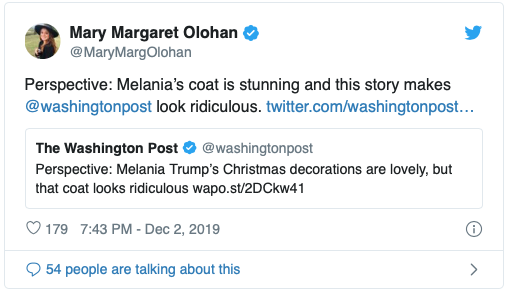 The Wapo, a former newspaper, does indeed look ridiculous, as well as cruel and petty.  By comparison, consider this Harper’s Bazaar tongue bath regarding Michelle Obama: 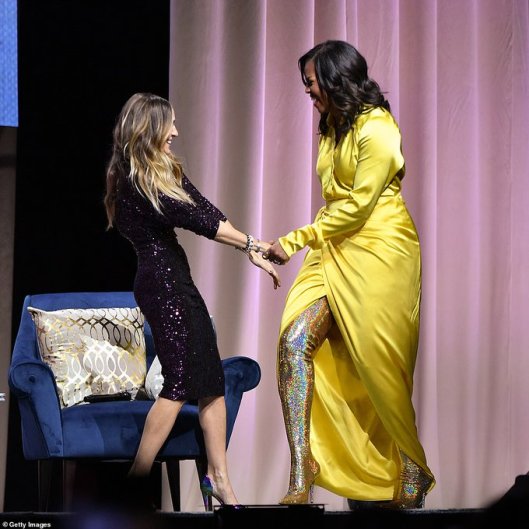 During her eight years in the White House, Michelle Obama redefined and modernized the concept of First Lady dressing. Now, in her life after the Obama presidency, she’s pushing new fashion boundaries and gracing us all with some major LEWKS along the way. The latest (and perhaps her best to date) came in the form of a head-to-toe Balenciaga outfit worn last night.

While on the promo tour for her new memoir, Becoming, the former First Lady stopped in Brooklyn for an interview with Sarah Jessica Parker at Barclays Center. For the occasion, she wore a stunning satin yellow wrap dress by Balenciaga. But it was the thigh-high glitter boots she paired the dress with that really made our jaws collectively drop.

Excuse me a moment while I wipe off the splattered drool.  Google “michelle obama, yellow dress, boots” to find innumerable similar articles. Trump Derangement Syndrome is alive and well, and more deadly than ever to those suffering from the self-inflicted/infected disease.  What do you think, gentle readers?  Responsible, sensible fashion commentary, or standard D/S/C hatred and depravity?

UPDATE, 12-07-19, 1650 CST:  In case, gentle readers, any of you were thinking I may have gone too far in criticizing The Washington Post’s coverage of Mrs. Trump’s coat, we now know better.  Melania wasn’t only guilty of a horrific wardrobe violation—a virtual fashion felony—she’s dog whistling with her choice of attire, as Fox News Reports:

The Washington Post raised eyebrows Thursday for a column asking whether first lady Melania Trump is ‘sending coded messages’ while serving as the presidential spouse or if ‘we are just talking to ourselves.’

I’ll go with “hearing voices in my head telling me to do terrible things,” but let’s read on:

Post columnist Monica Hesse opened her piece by addressing the upcoming unauthorized biography ‘Free, Melania’ and acknowledged how much of the book relied largely upon other people’s accounts as well as speculation, which Hesse described as ‘analysis’ about things ranging from the first lady’s body language to fashion choices.

Well, D/S/Cs are impeaching the President on “analysis”—inference and supposition–rather than fact, so why not?

And I wonder, Ms. Hesse, whether you’ve been taking your medication.

She continued, ‘I would like Melania Trump to mean something. I would like for her to mean something in the way that we would all like any of this chaotic era to mean anything, because the alternative is that we’re just living in chaos, in a country led by chaotic people… What if there was no meaning. What if we stopped inventing meaning… Free, Melania. Free us all.’

Monica HesseThe alternate explanation is Mrs. Trump chooses clothing because she thinks it looks good on her.  But of course, if Ms. Hesse thought this sort of nonsense, she wouldn’t be working at The Washington Post, would she?

12 thoughts on “Melania Trump Derangement Syndrome For The Holidays–UPDATED”