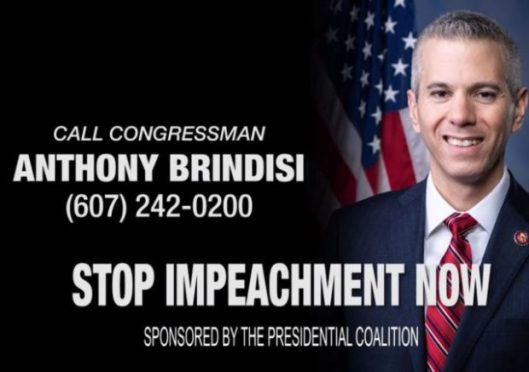 The header photo is an ad running against Anthony Brindisi (D-NY-22).  As Legal Insurrection explains, he is one of many very vulnerable Democrats reasonably worrying about losing their seats if they vote for impeachment.

You can censure, you don’t have to remove the president,” Lawrence said Sunday on No BS News Hour with Charlie LeDuff. ‘Sitting here, knowing how divided this country is, I don’t see the value of kicking him out of office, but I do see the value of putting down a marker saying his behavior is not acceptable.

When a black Democrat from Detroit has second thoughts…  But now she has third thoughts, and in the best Emily Litella fashion has said: “never mind.”  No doubt her D/S/C “friends” made her an offer she couldn’t refuse.

Rather than rolling over, exposing their collective pink bellies and whimpering “please, please don’t say means things about me,” the Republican Party is, for a welcome change, potentially fighting back, which raises the question:

Will the D/S/Cs impeach President Trump?  Consider these comments of Rep. Adam Schiff, the House driver of impeachment, via Fox News:

This president has now twice sought foreign interference in our election… when [Trump] invited the Russians to hack Hillary’s emails and later that day they attempted to do exactly that. There is a sense of urgency when you have a president who’s threatening the integrity of our elections,” he said on CNN’s ‘State of the Union.

Schiff is a liar, an idiot, likely both.  Trump didn’t invite the Russians to do anything.  He was making a joke about Hillary’s “missing” e-mails, suggesting the Russians had them, and they almost certainly did/do.

We need to act now if we’re going to act, and we can’t allow this obstruction to succeed,’ Schiff continued. ‘The other point I would make is, the case in terms of the Ukraine misconduct is ironclad, but so is the case of the president’s obstruction of the Congress.

Sorry Schiff, but asserting legitimately recognized privileges between the co-equal branches of government is not “obstruction,” but the way our representative republic is designed to work.

Despite displaying supreme confidence in Trump’s guilt, the California Democrat was unable to answer host Jake Tapper when asked if Trump would eventually be impeached, earlier in the interview.

With impeachment polling badly after the D/S/Cs best efforts, Schiff’s recalcitrance is understandable.  They almost certainly believed that with the able and willing assistance of their propaganda arm–the media–their witnesses, despite having no actual knowledge of wrong doing by Mr. Trump, could be spun to be Bombshells!  The beginning of the end!  The walls closing in!  Even though most Americans didn’t watch the hearings, they smelled something rotten, thus the polls going south for D/S/Cs.  Even worse, non-never Trump/Trump hating cracktivists know the media is hopelessly biased against the President, and normal Americans.

Let us therefore, gentle readers, consider several–by no means all– issues, very much on the minds of congressional D/S/Cs:

1) The D/S/C base, red eyed, drooling, in a homicidal rage, fangs and claws bared, will attack anyone that does not profess a similar blood-drenched compulsion to rend Trump, tooth and nail.  D/S/Cs know they eat their own, and those they don’t eat, they throw under the bus or bayonet as they lay wounded on the political battlefield.

2) Congressional D/S/Cs hate Trump with a demented passion.  Their unreasoning hatred is driving them to political suicide.  Some of the smarter, less infected among them realize this, and they’re horrified (see #1).  If they go ahead, they’re cutting–metaphorically–their own throats.  If they don’t, their base will do it for–to–them. 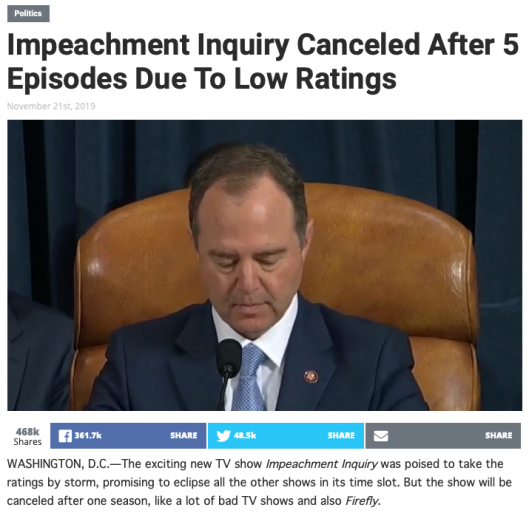 3) Rational D/S/Cs know the impeachment clown show as a disaster.  They actually know they have no evidence of impeachable acts, but like lemmings, they’re inexorably drawn closer and closer to the suicidal cliff (see #1 and #2).

4) D/S/Cs know if they hand down articles of impeachment, the Senate has the option of forcing a lengthy trial.  Senate Republicans may, as they usually do, snatch defeat from the jaws of victory by simply refusing to hold a trial, but it seems more likely than not, this time, they might actually demonstrate something resembling a backbone.  D/S/Cs know this too, and some are smart enough to fear it.

5) A Senate trial would require the D/S/C senators running for president to be present, disrupting their campaigns and putting them on record.

6) A Senate trial would suck all of the oxygen out of the room, pulling attention away from the campaign.  Surely, the D/S/C propaganda arm–the media–would do all they could to downplay and ignore the proceedings, but they couldn’t do that without also ignoring their D/S/C puppet master’s spin.

7) Senate republicans could, and just might, subpoena people D/S/Cs desperately do not want talking in public, people like Adam Schiff, Schiff’s thuggish staffers, the “whistleblower” that isn’t, Gropin’ Joe and Snortin’ Hunter Biden, and the rest of a real rogue’s gallery ripe for committing perjury.  I would be delighted to see the delisionally self-important “Lt. Colonel, please” Vindman–to name one–subjected to unrestrained questioning.  Why, Republicans could open up any can of worms they choose, and it wouldn’t be to Trump’s detriment.

8) Senate republicans, if their spinal stiffness holds, can control every aspect of a trial, in essence, doing unto D/S/Cs what they did unto Republicans. 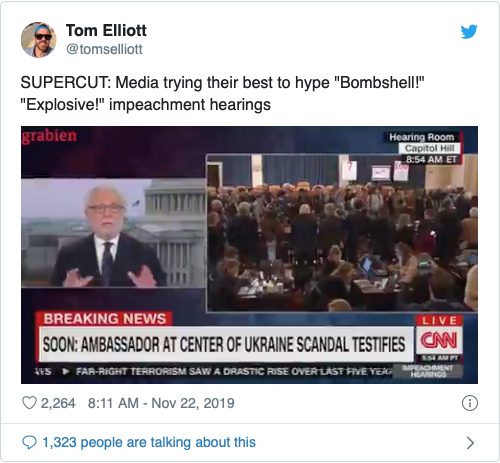 9) D/S/Cs know a senate trial would expose much they desperately want to keep hidden.  There would be actual “bombshells” the media couldn’t ignore, and the alternative media would gladly publicize.

10) D/S/Cs also know a fair trial will not only make them look like the partisan thugs they are, it will make President Trump, and Republicans in general, look good.

11) D/S/Cs know the political damage they hoped to do President Trump is not turning out at they planned.  They know if they go for articles of impeachment, it’s going to harm them, not him.  Many are desperate to do it anyway (see #s 1-10).

There are certainly more issues, and by all means gentle readers, raise them in your comments, but these seem to be the primary factors/fears on the minds of D/S/Cs and never-Trumpers these days.  D/S/Cs are getting an earful over the Thanksgiving recess.  Will they recognize their Trump Derangement Syndrome-fueled hate has backfired, and threatens to do them grievous harm while only strengthening Trump?  Remember a fundamental aspect of D/S/C thought is their policies, beliefs, their very political religion, cannot possibly be wrong.  They can never admit failure or defeat.  To even consider such heresy is destructive to their entire worldview, and could force them to consider that if the destruction of Trump, the highest, most holy of their sacraments is a failure, what other cherished beliefs might be wrong?  What if the virtue they so reflexively signal is not, after all, virtuous?

Or will they stay true to type, and “damn the Constitution (Normals, the rule of law, decency, truth, fact, due process, fairness); full speed ahead!”