Whenever I’m out on the trike, pedaling merrily along, I invariably pass women, often comely young ladies in fashionable athletic wear, running, or less often, riding.  When I do, I am also invariably disquieted because they are: (A) alone, (B) wearing earbuds, (C) mostly staring at the roadway a few feet in front of them, and (D) almost certainly unarmed.  When I am approaching them on the opposite side of a long, lonely, rural stretch of road, they often don’t see me at all.  When I’m overtaking them from behind, they don’t hear me, and often jump and squeal when I’m nearly past them and they spot me in their peripheral vision (I give them a wide berth). I keep them in sight as long as I can in my rearview mirror, but that’s limited by time and terrain. So I say a prayer for their safety and pedal on.  Liberty means the right to make dangerous choices.

If you’re the kind of person that thinks prayer useless, or that imagines I’m sexist because I’m concerned for the welfare of women, it would probably be a good idea to stop reading and find a safe space.  If you think there are no differences between men and women, I recommend you immediately smash and immolate your computer lest my thoughts somehow infect you through contact with the keyboard.  If you’re the type that thinks carrying any kind of weapon, particularly handguns, is evil and insane, I’ll pray you reach a safe space in time to find coloring books, fuzzy animals and Play Doh before it’s too late.  Oooops!  Sorry about the praying thing.

The hard, cold reality is women are different than men, particularly in size, strength and aggression.  Women tend to be smaller and lighter than men, have far less upper body musculature and strength, have little or no experience with physical conflict, and are by nature and nurture, unprepared for violence.  The latter is true of many men, but the comparative size and strength deficits remain.  Some women study the martial arts, but any martial artist, if honest, will admit even skilled women can be overpowered by larger, stronger, less skilled men.  Size and strength matter, which is why 150 pound men don’t fight 200 pound men, and female martial artists don’t compete against male martial artists.

Few people, particularly women, are ever involved in fights. They are fast, brutal and ugly. Being struck in the face is painful, stunning and destructive. Single blows can disfigure, cripple, even kill. Being attacked by someone larger and stronger is overwhelming and potentially deadly. The kinds of fights one sees on TV and in the movies, where a female hero defeats multiple, much larger bad guys, are not fighting, but choreography. Every movement, every blow is carefully planned and done over and over until the final, edited product is convincing, and no one is hurt. 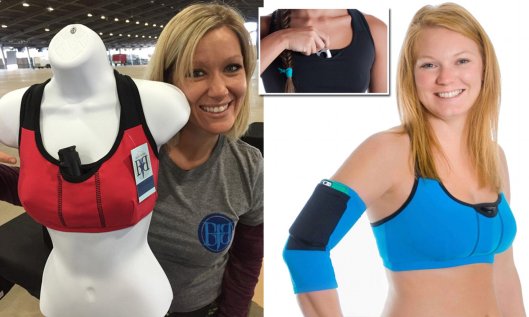 Avoiding confrontations—danger—is always the smartest option, but that’s not always possible, particularly if one lacks situational awareness.  Most people are completely unaware of what is happening outside their personal, arms-length bubble. Cell phones, ear buds, and other distractions have made this problem much worse. My article Bras and Guns And Knives, Oh My!  speaks of a case of a madman on a train, pointing a gun at many people, facedown in their cellphones, oblivious to death stalking them–until he shot one.

Fortunately, it’s not hard to develop better situational awareness by simply learning to pay attention to one’s surroundings, by always asking “what if?” What if that car behind me cuts me off?  What if that creepy guy watching me starts running after me?  Which areas should I avoid? Is anything, anyone, I can see threatening or unusual?  What’s different about this route I run/ride today?

Spotting potential danger early enough provides opportunities to go elsewhere, to go where there are many people, if properly armed, to deter an attack, or if necessary, end it. No woman should ever run or ride with ear buds or any other electronic device distracting them. This makes them easier targets for predators.  But running is no fun without my music!  Neither is being beaten and raped, or crushed beneath the wheels of a vehicle. But that will never happen to me!

Take this link to an article about two young women who likely thought just that, but found themselves fighting—thank God, successfully—for their lives despite being unaware and unarmed.  Eliminating distractions, developing situational awareness are only the first step.  One might think simply avoiding rural or otherwise isolated areas is all that’s necessary, but if one is a runner or rider, it’s difficult indeed to avoid such areas.  In fact, it’s not much fun to avoid them, and if a female runner/rider has to exercise alone, they are much more vulnerable.

Eliminating distractions and improving situational awareness aside, what else is necessary if a confrontation can’t be avoided?  Above all, women need to keep their distance from attackers.  Once inside grappling distance, they are at a serious, potentially deadly disadvantage. 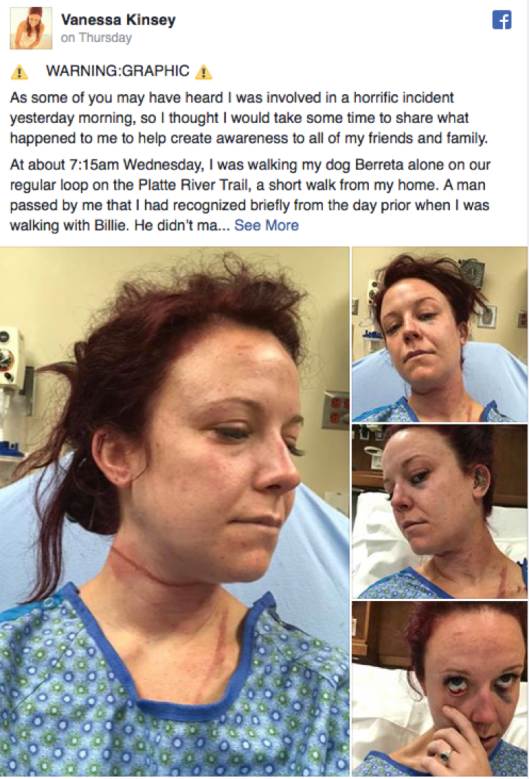 How about a cell phone? An attacker is not going to politely yield the time and space for their victim to dial 911 and calmly ask for help, describing him and giving the location, nor will they patiently wait for the arrival of the police, while observing a “time out.”  Expect a minimum of 15 minutes after one connects with a dispatcher and fully and coherently explains. Absolutely carry a cell phone, but don’t make the mistake of thinking it provides deterrence or protection.

How about alarms, whistles, flashing lights, combs, keys, or other supposedly sure fire means of daunting a much larger, stronger and determined attacker?  Any woman using such things is betting their life.  It’s a bad bet, and no bet at all in a rural or otherwise isolated area.  Remember, avoiding getting into grappling range of an attacker is essential.

What about pepper spray?  Commercially available products are less effective than those formulated for the police. During my police days I rarely used the stuff.  When it was used, everyone in range got dosed, even the police.  It causes some people to submit, but it only makes others mad, and their rage and struggles cause them to sling bodily fluids—and pepper spray–in all directions as everyone coughs and rubs their eyes. It also requires one to be close, closer than any rational person would want to be to someone trying to attack them, and the closer you are, the more of the stuff you’re going to get.  Outdoors it’s generally less effective than indoors (wind, etc.).

How about knives?  The aforementioned article speaks of a female jogger who was attacked, survived, and designed a line of bras with holsters for small knives. The use of edged weapons is a martial art in and of itself. It requires training, constant practice, skill, strength and speed.  Anyone fighting with edged weapons must be ready to be badly cut. Their use also requires one to be within arms length of an attacker, and for women, an attacker will likely have greater reach, strength and speed. Even if one is reasonably skilled in the use of knives, it’s difficult to do enough damage to quickly stop an attacker–it’s not the movies.  Remember: women must always keep their distance from an attacker.

What’s left is handguns, the only self-defense arm that can deter or quickly stop a determined attacker, the only arm that can bridge the size, strength and speed gap between men and women. But I could never hurt someone! I just want to scare them!

That’s a laudable, civilized attitude, but it fails to take into account the intentions of anyone vicious enough to attack a woman. Such attacks can leave one disfigured, physically and emotionally crippled, or if the attacker wants no witnesses, dead.  Who is really so tender toward rapists and murderers? What woman’s life is truly of so little value to them and those they love? Are the lives of sociopathic monsters of greater value to women’s families and society than the lives of the women they love?

I’ll not go into depth on the rationale for going armed.  Enter “guns and liberty” in the SMM homepage search bar to find the most up to date version of my series that fully explores those issues.  The mere presence of a handgun may be sufficient to make criminals turn tail and run, but no one should count on this. No one should ever draw a handgun without being ready and willing to use it. Predators can read hesitation, and they’ll take advantage of it. It is not merely brandishing a handgun, but the obvious will to use it—and sufficient distance–that deters and puts predators to flight.

Fortunately, many manufacturers make small, light and easily concealed handguns, and several manufacturers make bras and other clever holsters and other devices for carrying them while running or riding. Simple cloth holsters can also easily be sewn into sports bras.  Combined with situational awareness, one can maintain sufficient distance to avoid, deter or prevent attacks, and if attacked, to end them. 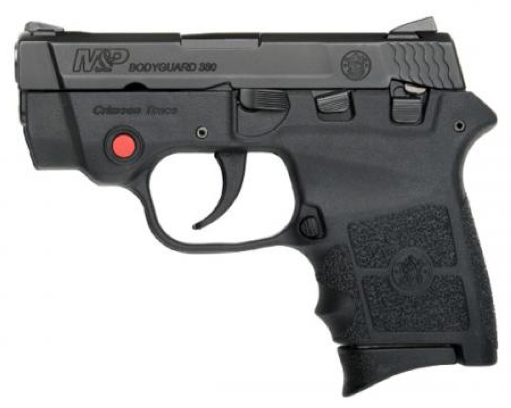 Among the best contemporary choices is the Smith and Wesson Bodyguard in .380 ACP. Contemporary cartridge design has made that cartridge a viable self-defense option, and the Bodyguard is available with an integral laser sight. Its polymer frame makes it light, and prevents rust. My article on that handgun is available here.

Another excellent choice is the Ruger LCP and LCPII, both polymer .380s. The LCPII is an updated version with a trigger superior to the original LCP.  Like the Bodyguard, it is available with an integral laser sight, and aftermarket laser sights, such as those available from Crimson Trace, are available.

More and more women are choosing to carry concealed weapons, which is a satisfying development.  But merely carrying a handgun is not enough.  One must learn to use it well, and maintain proficiency.  It’s often said the most dangerous person is the one that has only one gun, because they know it very well indeed.  Shooting is fun, and it’s equally fun to own multiple firearms for multiple purposes, but for running, and to a lesser degree, riding, the goal is to carry the smallest, lightest, and most effective arm possible.

I’d like to believe every woman I see while riding is aware of her surroundings, and ready and able to defend herself.  Maintaining fitness is good. Maintaining the lives of women is priceless.  The right to self-defense–and the most common and useful means to accomplish it–is the ultimate women’s issue.

14 thoughts on “The Ultimate Woman’s Issue”