Gaffe: noun.  When a politician accidentally says what they actually think or intend.

Thus did Gropin’ Joe Biden, a perpetual gaffe machine, let the D/S/C cat out of the proverbial bag when he said Democrats value truth over facts.  As a result, even Democrats, behind closed doors, recognize they’re in big trouble:

CNN reported Thursday evening that top Democrats are privately acknowledging that the impeachment hearings will do little to persuade the vast majority of the public that President Trump committed an impeachable offense. According to CNN, in a private meeting earlier this week, “House Speaker Nancy Pelosi and her top lieutenants were skeptical about the prospects of a dramatic shift in opinion even as public impeachment hearings began this week, according to multiple sources familiar with the matter.” Nevertheless, they intend to carry on, in the hopes that things might change.

Democrats have tried various shifts in narratives in order to find something that would stick, even accusing Trump of ‘bribery’ with regards to the $400 million in military aid that was briefly held up by Washington (without Ukraine officials even being aware of it) but even that hasn’t moved the needle in a significant way.

The D/S/C narrative continues to shift daily as they struggle to come up with something, anything, to use against President Trump.  Not helpful to them is the country, and the economy, care very little for their hysteria as CNBC reports:

The Dow Jones Industrial Average rallied to record levels on Friday, reaching 28,000 for the first time ever, after White House economic advisor Larry Kudlow said China and the U.S. were getting close to reaching a trade deal.

This is why D/S/Cs actually hope for a recession.  That, and the fact Mr. Trump’s popularity is actually rising, has them very, very worried, as The Washington Examiner reports:

The daily evaluation of the president found a four-point bounce for Trump following the first day of House impeachment hearings on Wednesday.

‘The president’s overall approval has been tracking up since Wednesday, the first day of the House impeachment hearings. It was at 46% on Wednesday morning, then rose to 48% yesterday and is now at 50%. Two of the three nights in today’s survey follow the highly-publicized hearings,’ according to the Rasmussen survey analysis.

At this stage of his first term, President Barack Obama was at 49%.

Considering media coverage of President Trump is 95%, on average, negative, this is remarkable.  And worse yet, Mr. Trump’s popularity among Black and other minority voters is also rising, as CNS News reports:

Both black voters and other minority voters are more convinced than white voters that most reporters are trying to help impeach President Donald Trump, rather than report the news fairly – with a majority of each of the three groups holding that view – a new Rasmussen Reports survey reveals.

In the national voter survey, conducted November 12-13, 53% of all voters said most reporters are trying to help impeach Trump:

But, 53% of black voters and 60% of other minorities, compared to 51% of whites, said reporters are trying to get Trump rather than report the news fairly.

That even Black voters, who have traditionally voted primarily for Democrats see the truth, which in this case also happens to be fact, about D/S/Cs is a strikingly clear indication why they’re so desperate to destroy President Trump at all costs.  In any criminal trial, the prosecutor’s opening statement previews for the jury what he intends to prove.  “The evidence will show that…” is a common formulation.  The mendacious Adam Schiff has done quite a bit of this, but to date, his handpicked witnesses have proved nothing, no quid pro quo, no bribery, no extortion, nothing.  In fact, they have proved the opposite. 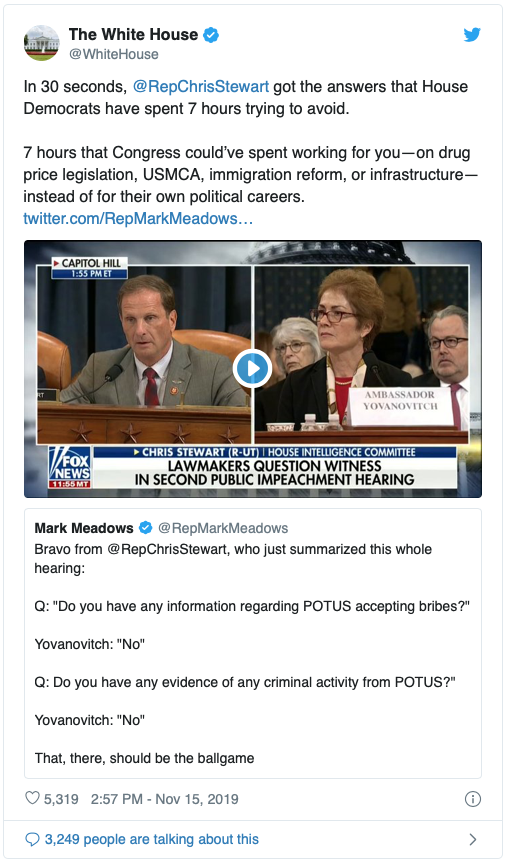 Former Ambassador to Ukraine Marie Yovanovich’s testimony was a disaster for D/S/Cs.  Unsatisfied with her performance, President Trump relieved her a few months before she was scheduled to step down.  She continues to be employed by the State Department at no loss of pay or benefits.  She had no first hand knowledge of the issues at hand, and was relieved months before the phone call between President Trump and the Ukrainian President.

So why was she there?  To cry for the cameras and portray herself as a noble and dedicated public servant mistreated by the mean Donald Trump who is interfering with official United States foreign policy by receiving an employee he has the absolute, constitutional power to relieve.  She was just another bureaucrat who thinks her opinion of foreign policy should override the President’s.  She had no evidence to offer, no knowledge of anything at issue, and admitted she knows nothing about bribery, extortion or a quid pro quo.

The testimony of Tuesday, November 19, was even more disastrous for D/S/Cs, as Fox News reports: 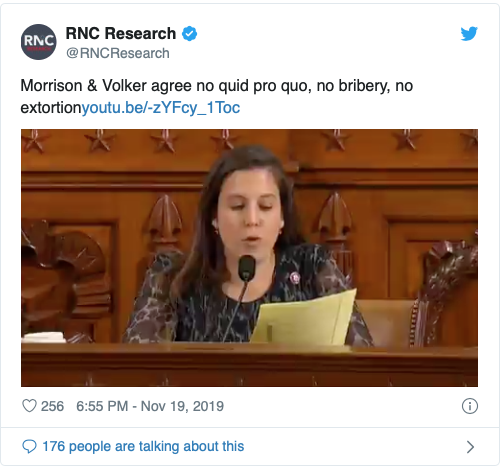 Republicans sounded a celebratory note as House Democrats’ impeachment inquiry wrapped up another day of public hearings Tuesday evening, saying the day’s witnesses had served only to highlight fundamental problems in the case against President Trump.

‘Did anyone ever ask you to bribe or extort anyone at any time during your time in the White House?’ House Intelligence Committee Ranking Member Devin Nunes, R-Calif., asked at one point in Tuesday’s afternoon hearing.

Later, Rep. Elise Stefanik, R-N.Y., covered similar ground in asking the witnesses about Trump’s fateful July 25 call with Ukrainian President Volodymyr Zelensky: ‘Mr. Morrison, you were on that call, and there was no quid pro quo, correct? No bribery? No extortion?’

‘Correct,’ Morrison replied in response to each question.

‘No, there was not,’ Volker replied, again and again.

This was the pattern with the four witnesses presented on Monday.

Kind of hard to prove a corrupt quid pro quo theory when the key U.S. policy people, plus the Ukrainians, were never aware of such an arrangement,’ Texas GOP Rep. Dan Crenshaw added late Tuesday, noting that Ukraine’s president has said he felt no pressure from Trump to open any probes. ‘Can we go back to governing now, that’d be great thanks.

Army Lt. Colonel Alexander Vindman was presented, due to his rank, as a man with ultimate moral authority.  Of all the witnesses, he most believes his judgment—the judgment of the “foreign policy community”–should override that of the President.  He was actually in on the phone call, but his testimony was entirely opinion and supposition.  His arrogance, self-importance, and his never Trump connections, badly damaged his credibility.  He too could not say he had any evidence of any crime, or a quid pro quo. 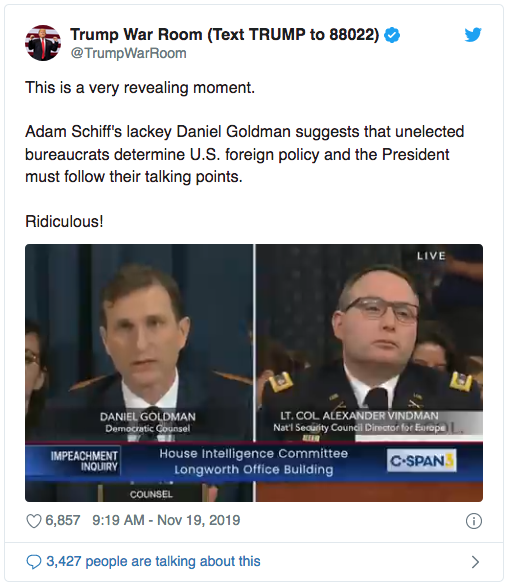 Arizona GOP Rep. Paul Gosar offered a blunt assessment of Vindman’s testimony, tweeting: ‘I think people need a reminder:  the democrats said they would impeach starting in December 2016–before @realDonaldTrump was even sworn in.  This is a hearing looking for a reason. It’s corrupt and immoral.  The dude in the uniform is a seditionist.’

An example of Vindman’s inflated ego:

In a particularly remarkable moment, Vindman testified that he was asked to serve as Ukraine’s defense minister three times — but repeatedly denied the offers — when he traveled to Kiev for the inauguration of Ukraine’s president. Oleksander Danylyuk, the former Chairman of the National Security and Defence Council in Ukraine, reportedly said on Tuesday the offer was ‘clearly a joke.’

Morrison said his understanding was that Trump generally was skeptical of foreign aid, and wanted to make sure that taxpayers were ‘getting their money’s worth.’

Imagine that: a President actually concerned taxpayer dollars be properly and frugally spent.  No wonder D/S/Cs hate him so much.

On Wednesday, the D/S/C big gun, the man that would put Trump away for good, EU Ambassador Gordon Sondland, testified.  It did not go well for D/S/Cs, as Fox News reports: 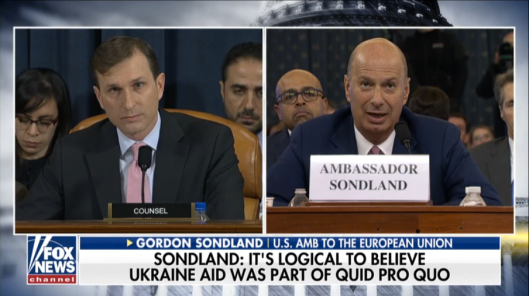 Sondland on Wednesday morning said in his opening statement that he had spoken to Pence about the delay in military aid to Ukraine, voicing concern this was tied to investigations. Sondland said he believed the aid would not be released until Ukrainian President Volodymyr Zelensky’s government announced an investigation concerning the Bidens.

VP Pence’s office denied the conversation took place, noting that Sondland was never alone with the Vice President on the trip he mentioned.  While Sondland clearly is no fan of Mr. Trump, he didn’t help the D/S/Cs:

Sondland also made clear he never heard directly from Trump on such a quid pro quo.

Sondland told the House Intelligence Committee that he never heard Trump say that military aid to Ukraine was conditioned on a public announcement by the Ukrainian president that the country was investigating Democrats, but he added that it was clear that a meeting in the White House between Trump and Zelensky was conditioned on investigations.

He also said Trump never told him a White House meeting with the Ukrainian president would not happen without a public announcement. He heard that from Trump’s personal lawyer Rudy Giuliani.

Sondland said it was a personal guess that the military aid was being held up until an announcement, one that others eventually also made.

In other words, Sondland also has no direct evidence of wrongdoing, he’s just making assumptions and expressing opinions, like everyone else that has testified.  By all means, sample the media’s articles on this week’s testimony, and gentle readers, you’ll see an entirely different narrative: truth over facts.

In a related story, Kemberlee Kaye at Legal Insurrection, demonstrates the media’s continuing hatred for Mr. Trump, and its reliance on “too good to check” narratives: 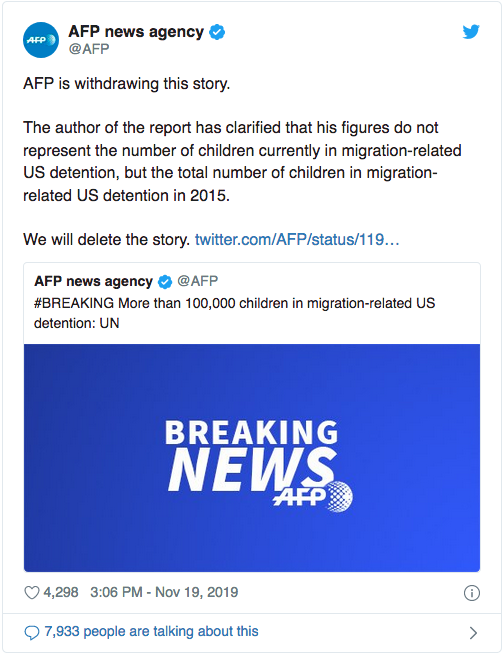 Adding an editor’s note or something of the like was tossed for a complete revocation, which is always last and worst case scenario in the news world. And yet…

By all means, take this link to this Legal Insurrection story that includes a 4+ minute clip of Rep. Elise Stefanik expertly destroying the D/S/C impeachment narrative.  It’s amazing Schiff allowed her to speak at all.  She has been so effective the media have been savaging her.  Also take this link to this PJ Media story https://pjmedia.com/trending/fake-news-ap-cnn-nyt-twist-sondland-testimony-on-ukraine/that illustrates the media is blatantly lying about impeachment testimony.

Thus far, D/S/Cs haven’t established anything remotely worthy of impeachment, and all of Schiff’s leaks and promises of damning testimony and evidence have failed to materialize.  And the clown show goes on…

UPDATE, 11-22-19, 1840 CST:  Take this link to an article by Greg Jarrett at Fox News.  It’s the most concise summary of the testimony of all the impeachment witnesses I’ve seen.  It has the very great advantage of being entirely accurate and true, unlike virtually everything published in the rest of the media.

7 thoughts on “Trump: It’s Different When Democrats Do It 9–UPDATED”