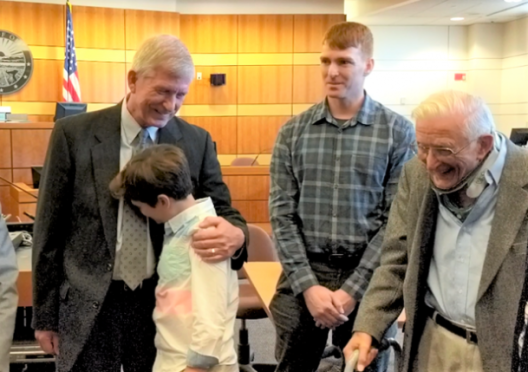 Four generations of the Gibson family

The Gibson’s saga (enter “gibson’s” in the SMM homepage search bar for the rest of this series) continues, to the detriment of Oberlin College, and the reputation of so-called higher education in America. This, from former Oberlin Professor Abraham Socher, in Commentary, is interesting:

In court, Raimondo and other key players in the Oberlin administration were shown to have actively supported two days of student protests against Gibson’s after the arrests, cursed and derided the Gibson family and its supporters in emails and texts—‘idiots’ was among the milder epithets—and ignored those within the college who urged deliberation, compromise, and restraint. Oberlin President Marvin Krislov and others rejected the Gibson family’s repeated pleas to renounce the charge that they were racists, even when presented with strong statistical and anecdotal evidence that this was not the case.

As Gropin’ Joe Biden said, they believe in truth, not facts.

In the fall of 2017, Roger Copeland, a distinguished professor of the history of theater, wrote in to the student paper. The college’s stance toward Gibson’s, he said, had been ‘evocative of the topsy-turvy value system in Alice’s Adventures in Wonderland, wherein the Red Queen declares, ‘Sentence first—verdict afterward.’ Now that an actual legal verdict was in, he urged the students, faculty, and administration to accept it:

The facts of this case are no longer in question. And yet, a counter-narrative has taken hold, one that refuses to allow mere “facts” to get in the way. . . . At what point do you accept the empirical evidence, even if that means having to embrace an ‘inconvenient” truth? . . . The time has come for the Dean of Students, on behalf of the College, to apologize to the Gibson family for damaging not only their livelihood but something more precious and difficult to restore—their reputation and good standing in the community.

But it was Copeland’s letter that upset administrators. Upon reading it, Oberlin’s Vice President of Communications Ben Jones texted Meredith Raimondo the following: ‘FUCK ROGER COPELAND!’ To which Raimondo responded, ‘Fuck him. I’d say unleash the students if I wasn’t convinced this needs to be put behind us.’ Which is to say, if prudence hadn’t suggested otherwise at that moment, Oberlin’s dean of students thought it would be a good idea to incite students against a professor for urging a respect for facts, law, and the welfare of one’s neighbors.

Such is the quality of adult leadership at Oberlin.

The Gibson’s v. Oberlin College story is about campus politics. As such, it is frequently ridiculous. But insofar as it shows in stark, petty detail the ideologically driven failures of deliberation and judgment, the craven political calculations, and the cynical abuses of power in an institution ostensibly devoted to higher learning, it is instructive. Robert Caro famously wrote that ‘if you really want to show power in its larger aspects, you need to show the effects on the powerless, for good or ill.’ Oberlin College has more than $1 billion in assets, about 3,000 students, and several hundred faculty and staff. Gibson’s is a small family grocery that has depended on the college in direct and indirect ways for its business for over a century.

Whether the extraordinary verdict against Oberlin will force a cultural reckoning of some kind remains an open question. Oberlin’s reputation has certainly suffered, as Professor Peek predicted, and the college has signaled that it will appeal. Immediately after the verdict, current college president Carmen Twillie Ambar wrote to faculty and alumni, stating: ‘This is, in fact, just one step along the way of what may turn out to be a lengthy and complex legal process. I want to assure you that none of this will sway us from our core values.’ Even if the college were to win its appeal on, say, narrow technical grounds, it wouldn’t show that the assault on Gibson’s was somehow about anyone’s ‘core values,’ even Oberlin’s.

I’m afraid I must disagree with the good professor.  By the way, gentle readers, you should take the link and read his entire article.  What Oberlin is doing is directly reflective of its core values, debased as they are:

In the aftermath of the jury’s verdict, Krislov’s successor as president, Carmen Ambar, along with college proxies and sympathetic journalists, have implied that—guilty pleas, allocutions, and an exhaustive six-week civil trial notwithstanding—there really was, after all,somethingto the claim that Gibson’s had racially profiled Aladin and others. In interviews, Ambar has hit on a bit of bad philosophy to obfuscate this point. ‘You can have two different lived experiences, and both those things can be true,’ she told the Wall Street Journal editorial board. One is tempted to say that the facile relativism of this—there is a Gibson truth and an Aladin truth; a townie truth and a college truth—reveals the sophistry behind Oberlin’s self-destructive approach, but actually it’s worse than that, if not philosophically at least morally. Nothing in the actions of Oberlin College or those of its dean and vice president suggests an understanding or empathy with the Gibson family’s experience.

Spoken like a true lunatic Leftist.  Two people may have different perceptions of the same event, and they may be partially correct, or entirely wrong.  There is, always, one set of facts that accurately describe what happened. Empathy?  Empathy is for the self-imagined elite, not normal Americans like the Gibson’s.  They’re not worthy.

How, after such public debacles costing millions of dollars in lost students, donors, and prestige, could Oberlin yet again condescend to its students, betray its finest traditions, and make itself a national laughingstock? Or as another Oberlin professor put it to me in a pithy email after the Gibson’s v. Oberlin verdict, ‘how idiotic can the college be always?’

Obviously, completely idiotic.  Legal Insurrection reports the college has been denied a new trial, which is as it should be.  By all accounts, the trial was properly conducted, Oberlin had every opportunity to present evidence, and there appears to be no reversible error.

Prof. Jacobson at LI has also provided additional insight into why Oberlin did not settle the case, apart from flaming arrogance and stupidity.  Actually, their conduct does reflect little but that.

One of the big questions in the Gibson’s Bakery v. Oberlin College case is why it didn’t settle. Based on recent court filings, we have a glimpse at the settlement process, and how it failed.

Currently the judgment for the plaintiffs amounts to almost $32 million in damages (including attorney’s fees) and defendants were required to post a $36 million bond to secure the judgment pending appeal. The trial court recently denied the defense request for a new trial. An appeal is expected, so it’s not over until it’s over.

That judgment resulted from two verdicts: $11 million compensatory damages rendered on June 7, 2019, and $33 million in punitive damages rendered on June 13, 2019, after a separate punitive damages trial. The combined $44 million was reduced by the Court under Ohio’s tort caps to just over $25 million. The Court also awarded over $6.5 million in legal fees and costsagainst defendants on top of the damages.

One can only hope they succeed.

The defense strategy did not make sense to me from the start — it’s seemed divorced from the reality of the publicly reported events and was completely tone-deaf. [skip]

The demeaning and insulting attitude towards the Gibsons would only worsen as the litigation progressed into trial. The trial defense was tone-deaf, something I mentioned numerous times, “from the start of this case I have questioned the aggressive and demeaning attacks on the Gibsons as a defense strategy,” and “I’m still shaking my head at the tone-deafness of the defense in belittling this family business.”

The defense even called an expert at trial to value the 5th-generation business, which at the time was supporting three generations of Gibsons and several non-family employees, at a mere $35,000, about the cost of a single semester at Oberlin College. After the compensatory verdict, Oberlin College’s general counsel made a bizarre attack on the jurors., After the punitive verdict, Oberlin College launched an intense public relations campaign led by president Carmen Twilley Ambar, vowing to fightthe verdicts, denying any responsibility, and (falsely) claiming that the college was held liable for student speech rather than the conduct of its employees.

At every step of the way, from the day of the protests to post-trial publicity, Oberlin College has never publicly acknowledged it did anything wrong, legally or otherwise.

And it never will:

Given Oberlin College’s attitude, the suspicion must arise that it never was serious about settling the case, that there was no ‘adult’ in the room insisting on a sober reflection both of what had happened and the exposure. But perhaps plaintiffs were asking too much, perhaps plaintiffs demanded an unrealistic amount.

By all means, take the link and read the rest of the article.  It’s now clear Oberlin engaged in abominable misjudgment, driven by Leftist ideology and grossly inflated egos.  If their attorneys did not make repeated attempts to urge a reasonable settlement, they not only had idiots for clients, but were themselves idiots.  The Gibson’s made multiple, good faith attempts at a reasonable settlement, one that would have cost Oberlin a fraction of the eventual judgment, but they arrogantly refused each one.  Now they appeal, hoping they’ll find judges as faux-elite and intellectually shallow as they.

The court found that the defense did not engage in bad faith in failing to settle. But it’s clear the defense misjudged the case. That misjudgment permeated the treatment of the Gibsons from the day of the protest to the present.

Oberlin indeed engage in bad faith; their entire approach has been bad faith, but not legal bad faith under Ohio law.

Oberlin College is convinced it did nothing wrong. The failure of settlement reflected that approach.

Oberlin College now puts its hopes on appeals court and state supreme court justices. Yet the appeal is not without risk, as the Gibsons will seek to have the full $44 million original verdicts restored.

We’ll find out in a year or two if Oberlin College again has misjudged the case. But in the meantime, the stench of how the Gibsons were mistreated continues to hover over the college.

I’ll continue to report as developments warrant, but I suspect like me, you too hope Oberlin loses, and loses hard.  It couldn’t happen to worse people.