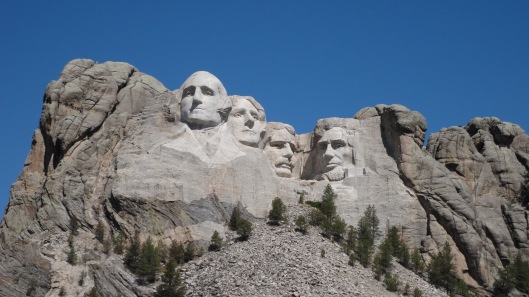 There it is, gentle readers, Mt. Rushmore.  I was born in Rapid City, and I’ve seen Mt. Rushmore innumerable times.  I was part of the police detail providing security for President Bush—the elder—on his anniversary visit, and have had access to the mountain in ways few are allowed.

There is something about that monumental sculpture that cannot be easily defined.  Not only is it truly an extraordinary artistic accomplishment for the ages, it is a fundamental expression of America, of our pioneering spirit, of our optimism and energy, and willingness to sacrifice, not only for ourselves and our progeny, but for all mankind.

George Washington, the indispensable man who won our independence, worked, within the confines of his times, to end slavery, who freed his slaves, and set the honorable standards of office for all future presidents.  Thomas Jefferson, a renaissance man, the author of the Declaration of Independence, the author of religious liberty, a man who, like Washington, favored ending slavery, a president who expanded our boundaries and the first POTUS to actively fight Islamists. Theodore Roosevelt, a great conservationist, the right man at the right time who won the Nobel Peace Prize when that meant something, and Abraham Lincoln, whose opposition to slavery against the opposition of Democrats, saved the nation and liberty for all. All are depicted on the granite mountain, chosen by sculptor Gutzon Borglum.

Some suggest others should be carved on the mountain, most recently, earnest Democrats/Socialists/Communists lobbied for the inclusion of Barack Obama.  Alas, the mountain will bear no more greatness of that kind.  There is not sufficient space, nor sufficient stable rock. Mt Rushmore remains, for all time, as it was when completed in 1941, and as it now stands. 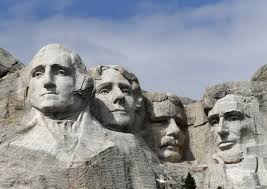 Every time I see it again, I feel, as I always have, a reverence for the beauty and solitude of the Black Hills, and pride in sharing the responsibility and legacy of being born American.  It’s fascinating to observe tourists, even those from other lands, as they draw nearer.  They stand in awe, speaking in hushed tones, as though they stand on holy ground, and in a very real sense, they do.  I leave, always, renewed, and humbled.

Having experienced the old infrastructure, which was much more in harmony with the surrounding forest than the current pseudo-Grecian, pseudo-Washington DC construction, I find the status quo a bit gaudy, formal, less a part of its surroundings than the buildings and tree-lined trails of the past, but most visiting the mountain will have no basis for comparison, and in its way, that’s fine.  The sculpture is inspiring, even awesome, a word as overused as “racist,” but in this case, awesome accurately applies, particularly when one considers the technology available as the mountain was sculpted.

The Minneapolis Star Tribune, however, does not agree.  To the enlightened, woke, socially just sensibilities of one Ron Way, Mt. Rushmore is racist, a monument to–what else these days?–white supremacy.  He writes in The real History of Mount Rushmore:

A tourist mecca cut from stone and a sinister delusion of destiny.

Those planning a trek to South Dakota’s Mount Rushmore these last several weeks of summer will be among 3 million who annually visit the world-famous sculptures of U.S. presidents. Most will swell with patriotic pride as they stand on a marbled deck under flowing flags at the ‘shrine to democracy.’

The place brings Americans ‘face to face with a rich heritage we all share,’ says the National Park Service.

The carved visages are iconic Americana, appearing in a gazillion media photos and books and travel features, in advertisements and promotions, on U.S. postage stamps in two eras, and on South Dakota’s license plate (‘Great Faces. Great Places.’).

But the back story of Mount Rushmore is hardly a rich history of a shared democratic ideal. Some see the monument in the Black Hills as one of the spoils of violent conquest over indigenous tribes by a U.S. Army clearing the way for white settlers driven westward by a lust for land and gold.

As it was in colonial America, the young country’s expansion was fueled by “Manifest Destiny” — a self-supreme notion that any land coveted by Euro-Americans was, by providence, rightfully theirs for the taking.

In the Star Tribune’s narrative, Mt. Rushmore is a symbol for all that is wrong with America, which is pretty much everything.  Of course, they rely on the opinion of the United Nations:

In 2012, a United Nations human rights official endorsed returning the Black Hills (‘Paha Sapa’) to resident Lakota [the Lakota Sioux], reviving a debate over whether eligible tribes should accept a cash settlement that tops $1 billion in an interest-bearing account. A prevailing response is that tribes want the land, a basis of the 1973 occupation of nearby Wounded Knee by the Minneapolis-based American Indian Movement.

The rest of the article draws a line of supposed evil beginning with Jefferson’s Louisiana Purchase, continuing through the settlement of the West, including the Indian wars, the various treaties with Indian tribes, General Custer, Wounded Knee, and ending with Mt. Rushmore, the repository of all western settlement, and before, evil.  I’ll mention only one of the many historical errors in the article. Way states it was a local tourism official that inspired Borglum to come to South Dakota, but it was actually the state historian, impressed with his work at Stone Mountain, Georgia.  For an essentially non-politicized version of Borglum and Mt. Rushmore, visit this article by the National Park Service.

Way all but proclaims Borglum a high-ranking Klansman.  This Smithsonian article  paints him as having “white supremacist leanings,” joining the Klan and being “deeply involved in Klan politics.” 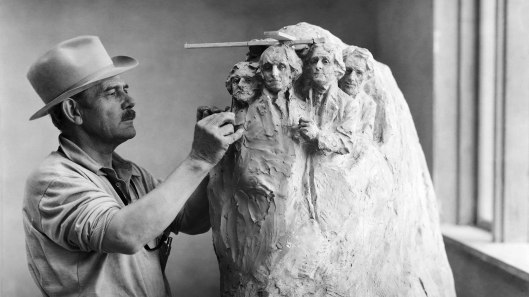 Let us assume this is so, that Borglum was an ardent Klansman.  Where is the Klan influence, the racism, the white supremacy in Mt. Rushmore, in the face of George Washington who freed his slaves, in putting the face of the Great Emancipator—Abraham Lincoln—on the mountain?  Way appears to be one of a growing number of contemporary ankle biters determined to rewrite history.  He, like The New York Times, is dedicated to convincing Americans everything is about race, America is inherently evil, everyone now living, people who have not the slightest connection to slavery or racism in any form, are therefore tainted, and this indelible stain may only be mitigated by the application of Socialism/Communism.

There is, as always, an element of general historical revisionism, which is a hallmark of Socialism/Communism.  The past must be rewritten to conform to the woke, social justice sensibilities of the moment in order to give those sensibilities, and those that hold them, legitimacy, to confirm their sense of self-importance and moral and intellectual superiority over Deplorables who see history as a matter of accurate fact rather than political convenience. They always seek to destroy the past, caring not that it leaves us rudderless in the present, unable to understand the failings so many died to overcome to bring us to our present.  Normal Americans are quite capable of learning from the actual past without forced interpretations in the service of Leftist politics.  Way provides a final example of tortured revisionism:

At Mount Rushmore, you may learn that the sculptures are arranged for maximum sun exposure, itself a cruel irony: The faces of the four presidents (white conquerors) peer southeast toward a reservation housing vanquished Lakota, who mostly live out forgotten, impoverished lives in the shadow of their sacred Paha Sapa that, legally, still belong to them. 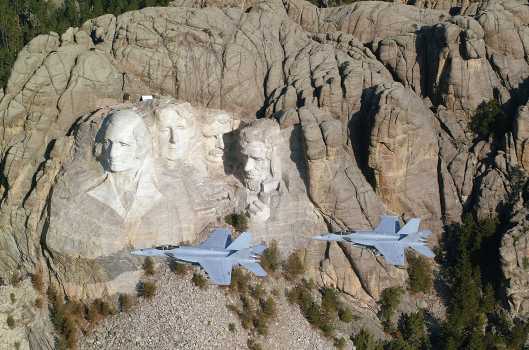 Way’s “cruel irony” has a rather more pedestrian, non-ironic explanation: the faces on Mount Rushmore are placed based entirely on the very nature of the granite, nothing more.  Some portions of the mountain were unsuitable due to natural fissures and the configuration of the stone.  This is why there will never be a fifth figure on Mt. Rushmore: there is not sufficient stable, workable stone.  One might as easily suggest the figures face toward the East–the Badlands–where Aliens have a secret base known to every president since Washington who conspired with them to ensure white supremacy forever.

There are, to be sure, tragic, shameful chapters in America’s past.  However, we do not learn from them by denying everything good about America and the men and women that sacrificed to provide the highest standard of living, and the freest nation in history, a nation with justice and liberty for all, even though we may, from time to time and in some circumstances, fail to fully live those ideals. Particularly, trying to analyze our history through the warped lens of race helps no one but the enemies of American constitutionalism, of liberty. Regardless of the political leanings of anyone involved in its construction, Mt. Rushmore remains the Shrine of Democracy.  Neither Way nor any other ankle biting historical revisionist can change that as long as Americans insist on historical fact rather than political narratives that warp the past to achieve dishonorable contemporary political ends destructive to liberty.

When the ankle-biting historical revisionists are dust, the Shrine of Democracy will endure.  May America endure as well.