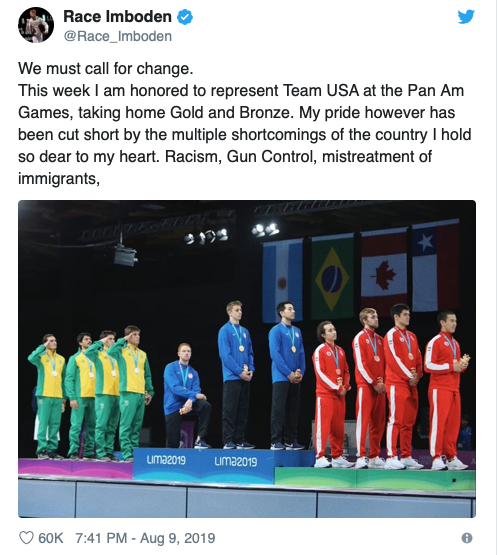 Back on August 14, in Race Imboden: An American Fencer?  I wrote about young Mr. Imboden, who fenced for America at the recent Pan Am Games, and taking a page from the handbook of various dim-witted athletes protesting this or that, knelt during the national anthem. Fencing authorities noted that all athletes compete with the understanding that political displays of any sort are forbidden, and said they were considering “consequences.” I suggested one:

I can think of one particularly appropriate consequence: forfeiture of the privilege of ever again representing a country whose ‘shortcomings’ gave Imboden license to imagine he could spit on Americans and dishonor the American flag and national anthem.

I went a bit further, discoursing on Imboden’s ill-considered protest:

Perhaps Imboden is well intentioned.  Perhaps he was merely caught up in the all too common ill-informed passion of youth. Perhaps he’s trying to impress a girl. Perhaps he is just a narcissistic jerk.

Racism in America, including white supremacy, is all but dead, with the exception of the miscreants Hanson identified.  Such people are few in number, and have no political or cultural influence.  They are justly regarded as social pariahs by all decent Americans of any race.

Imboden’s ‘protest’ is particularly harmful to his sport. The NFL lost substantial patronage when similarly arrogant athletes decided to call attention to their highly refined sense of social justice over issues they likely knew little or nothing about.  But the NFL can afford to lose patrons.  It’s still a billion dollar industry, and the very people complaining about the nation and people that make that industry profitable are athletes making salaries of which most Americans can only dream.  This does not tend to make normal Americans say: ‘Golly!  Since that grossly overpaid, dim witted athlete took a knee, I must be intellectually and morally inferior to him, and I’d better stop being a racist too!’

For sports like fencing, sports about which most people have never heard—‘you mean they have that sword fighting stuff around here?  Really?’—pissing off potential patrons and fans is not commonly thought a good thing. Showing callous disrespect for the flag and the nation—I don’t share Mr. Jones’ respect for Imboden’s little snit fit—is also something that does not reflect well on ‘USA Fencing.

Well. The fencing/Olympic authorities have decided on a fitting consequence, as Fox News reports:

Two U.S. athletes were given a year of probation by the U.S. Olympic and Paralympic Committee (USOPC) for staging protestswhile on the podium at the Pan American Games earlier this month, letters sent Tuesday revealed.

Hammer thrower Gwen Berry raised her fist and fencer Race Imboden took a knee while on the medal stand last week in Lima, Peru. All athletes at the Pan American Games and the Olympics agree to rules forbidding political protest.

‘It is also important for me to point out that, going forward, issuing a reprimand to other athletes in a similar instance is insufficient,’ USOPC CEO Sarah Hirshland wrote in the letters, which were obtained by the Associated Press.

‘We recognize that we must more clearly define for Team USA athletes what a breach of these rules will mean in the future,’ Hirshland wrote. ‘Working with the (athletes and national governing body councils), we are committed to more explicitly defining what the consequences will be for members of Team USA who protest at future Games.

What bold leadership. What integrity.  What concern for the non-political nature of international athletic competition. Apparently telling them they couldn’t play political games and virtue signal during international athletic competitions wasn’t sufficiently clear.  Apparently, “don’t ever do that” is somehow vague, or so complex athletes can’t possibly apprehend its meaning.  So now the authorities will do what, exactly?  Write a list of increasingly serious consequences?  A stern talking to for partially kneeling or sort of raising a closed fist?  A written reprimand for kneeling or fisting all the way?  Probation for a second offense?  A really stern talking to for a third offense?  And where does one go from there?  How can they be sure athletes are sufficiently intelligent and responsible to understand and comply with even that?

Apparently this “probation” consists of nothing, actually.  The virtue signaling athletes may still train, travel and compete.  What awe-inspiring consequences.  That’ll show them.

What part of “don’t do anything that would dishonor your nation” can’t these people understand?

I suspect, gentle readers, we’ll just have to wait until the next athlete decides social justice demands they demonstrate their enlightened intellect and morality for the world to see to discover what “consequences” mean to American Olympic authorities. One thing is certain: if they actually mean to truly stop this kind of juvenile, anti-American behavior, there can be one consequence and one only: a lifetime ban on competition, to take effect immediately upon violation of a very simple, easily understood condition of participation.

The kid glove treatment these ingrates have received will only encourage others to demonstrate their ingratitude. One is tempted to observe that if they think so poorly of America, they should live their convictions and move to a nation that meets their enlightened sensibilities, and don’t let the screen door whack them in the backside on their way out.  Of course, they won’t do that.  The kind of crass virtue signaling in which American athletes engage is the conceit of an advanced, tolerant and free nation.  Many other nations are rather more serious about such things.

That alone should give such ungrateful people pause, but of course, it’s always all about them.  As President Trump would say: sad.