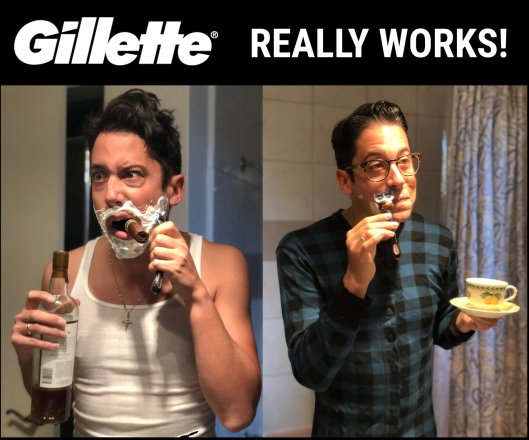 Back in January of 2019, Gillette, the razor company, took the bold, woke step of egregiously insulting its customer base.  In Gillette—Girly Man Virtue Signaling, I observed:

Being male myself (I know: I looked), and therefore hopelessly toxic and living under a rock, I am, nonetheless, mildly annoyed, though not at all surprised, by this example of corporate virtue signaling.  It is a particularly odd time for them to ‘come out’ as the company of girly-men everywhere when a good number of companies are marketing perfectly good razors and blades at a fraction of the price of Gillette products, eating into their market share.  In such a climate what should any smart company do?  That’s right: piss off their customers.

Avoiding that would seem obvious to anyone in business, however, as John Belushi used to say: “but nooooooooooooooo!”

As for Gillette, one can only hope “get woke, go broke” is more true than figurative.  Those virtue-signaling girly men just may discover the free market can do quite well without them.  Their employees will be able to find work at the razor companies that replace/displace them. Perhaps they can learn that manufacturers of consumer goods should stick to business and leave trying to impress simpering ninnies that would throw them under the bus in a millisecond should it be politically advantageous, to politicians and leftist cracktivists.

And so the shaving cream has curdled, as The Washington Times reports:

The year that Gillette launched its ‘We Believe’ campaign and asked ‘Is this the best a man can get?’ has coincided with P&G’s $8 billion non-cash writedown for the shaving giant.

Correct me if I’m wrong, gentle readers, but in a capitalist system, “new competitors” always try to provide a product as good as the category leader for less money. This is often known as “supply and demand,” and/or “competition.”  Gillette is clearly fortunate to have such an astute Chief Financial Officer.

Observers such as Red State’s Brandon Morse responded by essentially likening the public stance to a lie by omission — the ‘toxic masculinity’ ad punctuated news cycles for weeks and was repeatedly mocked on social media.

No!  That couldn’t possibly be a factor, could it?

Perhaps P&G isn’t willing to come forward yet with the fact that they made a monumental error in assuming men would take the ‘toxic masculinity’ commercial well, but they should soon,’ Mr. Morse wrote Wednesday for the conservative website. ‘The brand is damaged enough to lose billions, and men aren’t coming back, especially with cheaper alternatives embracing men for who they are and not assuming the worst about them.

Yeah, but those men are toxic and masculine in the worst toxically masculine way.  They aren’t enlightened, morally and intellectually superior self-imagined Democrat/Socialist/Communist, pussy hat and vagina costume wearing pajama boy elitists of indeterminate gender.  Even though they’re most of Gillette’s customer base, a modern woke company has to have priorities that have nothing to do with making a profit, doesn’t it?

Gillette has learned that in [current year], it’s not enough for a company to make a product that people want. It’s not enough to make them feel inadequate about themselves, and then sell them the supposed cure for that inadequacy. Consumers, men in particular, must be made to feel worthless. They have to be reminded that their needs and desires are wrong under any circumstances, that their instincts are loathsome, that their very existence is a malignancy, and that they’re responsible for all the world’s ills whether they want to admit it or not.

Now give them your money, you piece of garbage.

Wait, isn’t that pretty much the Democrat/Socialist/Communist party’s view of all  normal Americans in general?  We’re horrible racist, sexist, xenophobic, homophobic, ic, ist, etc. wastes of perfectly good oxygen.  Sure, they’re particularly down on men, specifically those of the white bread persuasion, but Democrat policies basically amount to grievously insulting and abusing normal Americans while demanding they pay the freight for everyone else.  What’s not to like about that?  Shouldn’t Gillette double down on that kind of progressive success?

Gillette’s CEO and president, Gary Coombe, says that angering some consumers with its #metoo campaign was a ‘price worth paying’ if it meant the brand could increase its relevance among younger consumers and turn around its falling market share…

Hmmm.  So $8 billion is a price worth paying?  I wonder how I can convince Coombe giving me a billion or two is a price worth paying.  After all, I’m sure I’ve used a Gillette razor sometime in the past. and I can promise to be less toxic and masculine, really I can.  I can just see Gillette’s next advertising campaign:

It seems that perhaps even millennial males aren’t particularly fond of being insulted for merely existing by people who want them to buy their overpriced products in a highly competitive marketplace.  Granted, many of them are of indeterminate manhood, but apparently, most still retain sufficient testosterone—and common sense–not to buy things from people that not only think them pond scum, but are willing to spend millions on national ad buys to express that peculiar kind of tough love.

Gillette: the best a man can ignore.

10 thoughts on “Gillette: The Best A Man Can Ignore”