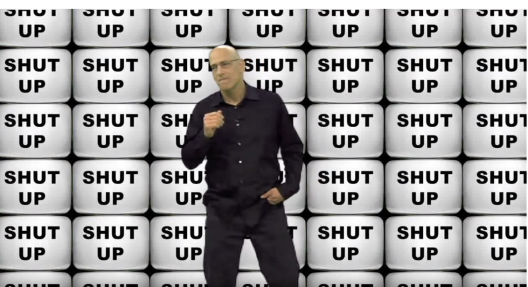 There are three things we need to understand, and fully accept, about the Left:

1) They really do hate us–and America.  They hate us with an insane, burning intensity, a perverse passion that vaporizes reason, decency and humanity.  They want us conquered and submissive.  Many want us dead–it’s easier to rule that way.

2) For decades, they have been shaping and controlling acceptable public discourse.  They, with the willing help of the very media–and social media–they’ve called idiots, have largely succeeded.

3) They have very nearly succeeded in imposing their primary demand in response to their insanity–shut up–on us.

Am I wrong?  Hyperbolic? Paranoid?  If the three things I’ve proposed are true, that explains everything the left has done for decades–their current political stances–rather well, doesn’t it?  It was all going so well for them.  All they had to do was call us racists, sexists, homophobic, transphobic, xenophobic, nativist, white supremacist, white privileged, and lately, point out our “white fragility” etc., and even Americans who should have known better agreed with them and meekly shut up.

And then came Trump.

Consider this from Powerline’s John Hinderaker:

Regular readers know that I am a fan of President Trump, and more often than not, a fan of his use of social media. But today he committed the worst unforced error of his presidency, one that we will hear about from the Democrats from now until November 2020.

This morning the president tweeted about ‘Progressive’ Democratic Congresswomen…’ 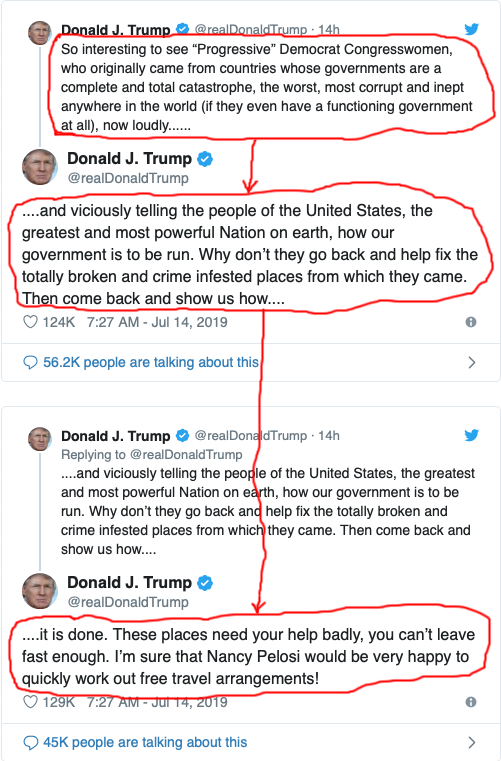 President Trump is referring to Alexandria Ocassio-Cortez (D-NY) and her “squad”: Ilhan Omar (D-MN), Rashida Tlaib (D-MI), and Ayanna Pressley (D-MA).  They have made a name for themselves–Pressley to a slightly lesser degree than the rest–by continually berating America and Americans, by demonstrating a remarkable degree of anti-Semitism, and by advocating against the interests of America. Upholding and defending the Constitution is not among their priorities.  I normally agree with Hinderaker, but not this time:

…I share his low opinion of those ill-informed leftists. And no doubt he had in mind Ilhan Omar when he referred to ‘countries whose governments are a complete and total catastrophe,’ etc. His description certainly applies to Somalia. But to my knowledge, Omar is the only one of the ‘progressive Democratic Congresswomen’ who was not born in the United States. As to the others, Trump’s rant is not just wrong, but embarrassing. AOC, for example, grew up in a wealthy suburb of New York.

Hinderaker is missing the allusion.  Mr. Trump was not speaking to the place of origin of each of the “squad,” nor was he demanding they leave America, but to ungrateful immigrants–and their enablers and supporters–in general.

The Democrats have been self-destructing, with the progressives denouncing Nancy Pelosi and other members of the party’s leadership as racists. That conflict has dominated the news, and I am sure Trump is right that Nancy Pelosi would be happy to work out travel arrangements to get rid of the Squad. But now she won’t have to. Trump’s attack on the Squad was so foolish that I would assume it to be a case of drunk-tweeting, except that the President doesn’t drink.

Mr. Trump is not, in any way, helping the Democrats.  There is nothing, nothing,he could possibly do that would make them love America or Americans, or be civil toward him.

Which, of course, doesn’t excuse the single stupidest act of Trump’s presidency.

That’s a matter of opinion, and tactics, as I’ll shortly explain.  Hinderaker, and many other commentators who should know better, certainly gave support to this kind of thinking:

There is, of course, no racism whatever in Mr. Trump’s tweets, but simply offering a differing opinion, or daring to call out people like the “Squad” for what they are, is inherently racist because they’re not, incidentally, white, and shut up!  That’s the dog whistle Leftists are hearing. Can any sentient being imagine they’d think his comments acceptable to them were he referring to white Leftists?  Prof. Glen Reynolds ofInstapundit is more on the right track:

This is barely even 2D chess. Trump is pointing out that these ‘it’ girls are ungrateful asses who don’t like America. By not naming them, he’s forcing their defenders, and his critics, to admit that they’re ungrateful asses who don’t like America before they can even talk about the issue. This isn’t hard. But if you want more, there’s this way of putting it: All the Democrats have to do is not be crazy, and Trump’s making it impossible for them to do that.

Not quite, and I’ll deal with that shortly too, but first, consider this excerpt from my favorite Bookworm.  If you’re not reading her daily, you’re missing one of the true lights of the Internet. By all means, take this link and read her entire article:

Within the last decade or so, the Leftists changed this immigration Overton window. Pretty much ever since Obama hit the White House, Leftists have insulted America and then doubled-down on insulting America, and than increased their insults to America. Even as people from around the world have illegally stormed America’s borders, the Left has told us — and instructed these new immigrants to believe — that America is a stinking pile of poop country, filled with evil plutocrats and redneck racists. To the Left and the new immigrants they indoctrinate, America is a country to be loathed, not to be admired. Moreover, immigrants are told to believe that whether we graciously invited them in or they voluntarily broke in to our country like common criminals.

The Overton Window to which Bookworm refers is the idea of the limits of acceptable, normal political discourse in America.  She explains in more detail in her complete article.

You know that and I know that this is what the Leftists have done. Moreover, the millions of Americans who aren’t as political as we are know that this is what Leftists have done. They intuitively recognize that the new Overton window is as unrelated to reality as the current gender madness, but because of the Leftist Overton window shift, they are cowed into silence. The silent, sane majority in of Americans know that they can lose their jobs, get doxed, be socially humiliated, or be subject to brutal attacks if they suggest that people who were living in dirt poor, war torn, corrupt countries were blessed to come here. It would be even worse were these silenced Americans to state the obvious conclusion: If these new immigrants cannot show gratitude for the country that took them in, but insist that it’s the most evil country in the world and that their dirt poor, war torn, corrupt homeland is better, they should stop taking up space in America and return to their natal lands.

In other words, Trump stated the obvious. And by his willingness to state the obvious, he has returned the obvious to the realm of public discourse. He has shifted the Overton window back to a more normal, common sense debate. It wasn’t a mistake of epic proportions. It was a brilliant insistence on having public debate occur in the real world, not in the Leftist’s dystopian fantasy world.

Leftists constantly labor to create their own reality, and to force us not only to accept it, but to praise it, or at the very least, to shut up.  This is what Hinderaker, to a lesser degree, Reynolds, and a great many conservatives who ought to know better seem to be missing.  Leftist’s version of reality is the very definition of crazy, and Mr. Trump exposing that insanity will never, for a moment, induce sanity in them. 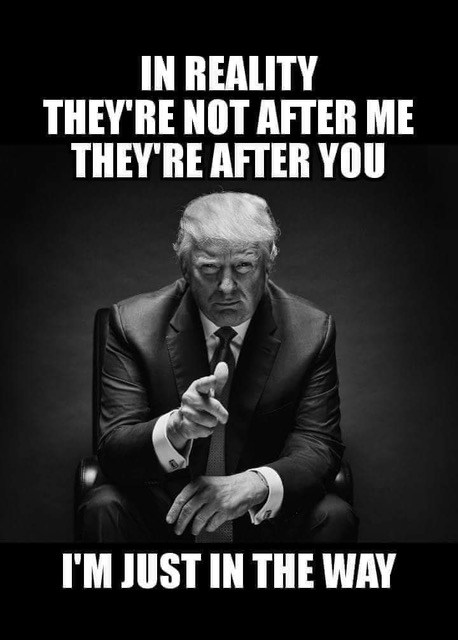 Mr. Trump was elected in large part because he not only refuses to live in Leftist reality, he attacks them for trying to make us live in it.  He does not suffer fools gladly, just as most Americans do not.  They’re attacking him, but he’s just an in-their-face symbol of everything they hate about us, which is everything.

Their reality was supposed to be Hillary Clinton, a doddering drunkard communist they could have controlled in the unlikely event she wasn’t sufficiently leftist.  The current crop of Leftists thinks Barack Obama was too soft, not sufficiently leftist.  They wanted to build on his successes, and then it all fell apart.  The Deplorables didn’t shut up, and they–damn them!–voted the wrong way, against their interests, against Leftist reality!  Then Mueller failed.  Then impeachment failed.  Then Trump wiped away much of what Obama did accomplish.  He–damn him!–actually follows the Constitution and enforces the rule of law, which is hell on the social justice racket.  Leftists hate normal Americans because they won’t vote for them, so they want to import people who will, and Trump insists on real reality on their behalf!  How can they have open borders, empty the prisons, and get the much coveted dead vote under those conditions?  If Deplorables won’t shut up when called racists by their moral and intellectual betters, what then? 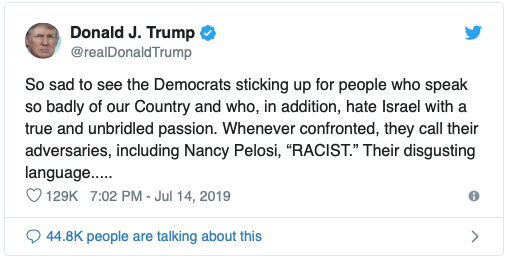 His initial tweet focused on two things: he made fun of the Democrats internal battles, and he said something normal Americans think and say every day.

Consider, gentle readers, that Nancy Pelosi–Nancy Pelosi–as confirmed and virulent a leftist as one could imagine until recently, a woman who has assiduously tried to establish socialist reality in America for decades, actually thinks AOC and her “squad” too far to the left.  By this, Nancy actually means they’re exposing too much of leftist reality. It’s not that Nancy and leftists of her ilk don’t think and want the same things, they’re just from a sneakier generation that understands the rubes of Flyover Country aren’t quite as stupid as they make them out to be, and worst of all, they have all those guns and know how to use them.  Yet Nancy must defend the young, admittedly dense, upstarts against all reason. Trump knows this well, and delights in twitting them.  Normal Americans know it too, and appreciate it when he acts on their interests. 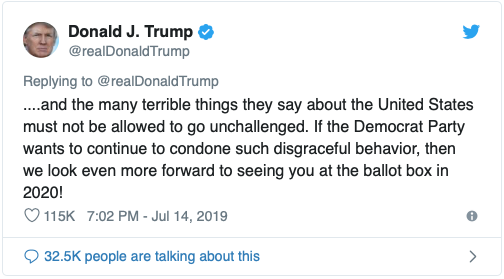 Most importantly, Mr. Trump knows normal Americans often think–and say–to people who are insufficiently appreciative of their blessings, “if you don’t like it, why don’t you go elsewhere, and don’t let the screen door hit you in the ass on the way out?”  This is particularly true of people who enter and remain in America illegally, and who show their appreciation for America by defacing the American flag and raising the flags of foreign nations over it. While Leftists find that reality to their liking, that’s the kind of thing that makes normal Americans not only mad enough not to shut up, but to consider doing something about it.  For now, Mr. Trump is speaking and acting for them, and they like it–and him.

Leftists ought to appreciate that. Unfortunately they’re historically illiterate; they insist on their own history.  They might learn from the Japanese, who eventually learned the danger of awakening sleeping, tactically capable giants:

Perhaps those critical of Mr. Trump’s tweet need to spend a bit more time in the real reality of normal Americans, where what he said not only finds universal agreement, but praise.  Is it really too much to expect our congresscritters to honor their oaths of office?  Is it too much reality for them to praise America, and to at least pretend to like Americans?  Is it too much for them to recognize the bounty and blessing of American citizenship and demand immigrants not only be here lawfully, but assimilate into the culture, decency, tolerance and generosity of America?

Of course it is.  That’s not their reality, it will never be their reality, and they’re very, very frustrated Donald Trump isn’t shutting up, and we’re loving it. Perhaps one day soon, we’ll start telling them to shut up–when they get back from the places they think sooooo much better than America, that is.

“Unforced error”?  “The single stupidest act?”  Not in real reality.