We have a bumper crop of too stupid to survive for you in this edition, gentle readers, beginning with the never ending source, AOC:

The words ‘concentration camps’ and ‘never again’ are ubiquitous [sic: they mean “synonomous”] with the Nazi Holocaust. It is highly unlikely that Ocasio-Cortez does not know this. Obviously, AOC was trying to evoke the Nazi Holocaust and Nazi concentration camps. Further, after she was called out by Rep. Cheney, AOC followed up with a tweet accusing the Trump administration of establishing concentration camps and saying, ‘This is not hyperbole. It is the conclusion of expert analysis,’ and linked to an Esquire article that acknowledged that the term ‘is synonymous with the Nazi death machines across the European continent.’ If she wasn’t trying to evoke the Holocaust she would have pointed that out originally, and now she’s trying to change the narrative. 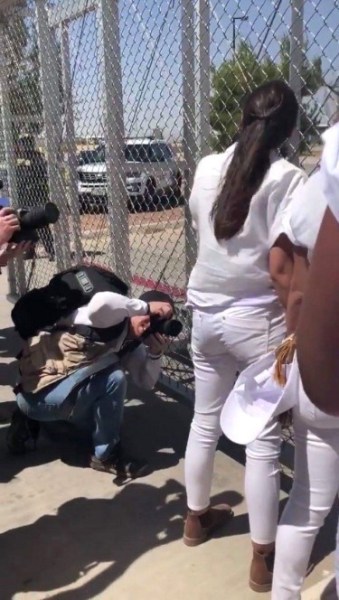 And as we see from the photo above, the noble AOC was weeping about nothing.  The lot on the opposite side of the chain link fence was empty, the whole thing, staged.

Just how stupid do Leftists think normal Americans are? This stupid:

Jim Acosta has a new book to peddle (I won’t link to it here but I’m sure you can find it on a quick search if you’re interested), and he’s been using his platform at CNN to promote it. He recently sat down with Don Lemon to discuss the ‘dangerous’ nature of covering the President, particularly if you have anything critical to say about him. The two-person choir was singing in unison, assuring everyone that CNN has no inherent bias, does not ‘hate’ President Trump and certainly doesn’t support Democrats over Republicans. (Perish the thought.) It’s a rather brief exchange, but the tone-deaf nature of these denials was really something to see. (Free Beacon)

CNN host Don Lemon on Tuesday attempted to bat down the notion that CNN has bias against President Donald Trump, adding they do not favor Democrats…

Acosta agreed with Lemon’s comments and claimed that just because CNN is “pro-truth” doesn’t mean they are “anti-Trump.” He went on to talk about the theme of his book and how the media is “not the enemy of the people.”

“We are defenders of the people, and we want to defend the people because we are devoted to the people,” Acosta said. “We are not here to spin things or color things a certain way. We’re here to get the way people reliable, accurate information on a daily basis. That’s why we all come into work everyday. We get a high out of it, and I just want to make sure we keep this going as a country. 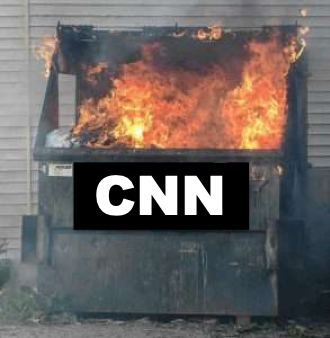 Intelligent people, of course, tend not to watch CNN at all, but goodness, gracious. And speaking of stupid, here’s some of the latest from Ilhan Omar:

Uh, not quite.  Even the leftist Politifact rated her claim false:

When we last examined the numbers, earlier this year, the federal Centers for Disease Control and Prevention reported there had been 39,773 deaths related to firearms in 2017. 2017 is still the most recent year for which annual statistics from the CDC are available.

The figure counts deaths resulting from suicides (60 percent of the total), homicides, unintentional and undetermined deaths, as well as those from law enforcement. And it was the highest tally in at least 40 years.

Meanwhile, the average over five years — 2013 through 2017  — is slightly lower, according to Brady, the nonprofit formerly known as the Brady Campaign to Prevent Gun Violence.

Either way, the total gun deaths per day is far fewer than the 500 Omar claims:

Oops.  A bit more from Omar:

Let us consult the dictionary:

Alien : belonging or relating to another person, place, or thing : STRANGE an alien environment

b: relating, belonging, or owing allegiance to another country or government : FOREIGN

And let us consult federal law:

The term “alien” means any person not a citizen or national of the United States.

Hmmm.   Apparently some people are alien after all.  And in the Trans wars:

And in the Hillary Clinton department:

Yeah, she sure was a foreign policy whiz, at least so far as getting foreign cash i to the Clinton Foundation’s accounts goes.  And:

Uh, because she was and is deplorable, not normal Americans?

Speaking at a presidential forum convened by the Poor People’s Campaign yesterday, Joe Biden was asked how to eliminate poverty now (video below). In response to the question, Biden advocated the elimination of the Trump tax cuts and observed that there is plenty of money around. So no problem or, as Biden might put it, no problem, man.

So we eliminate poverty by raising taxes?  Of course! Why hasn’t anyone thought of that before?

The New York Times reports on the forum addressed by Biden in Thomas Kaplan’s story “2020 Democrats Address Poverty and Systemic Racism at Presidential Forum.” From Kaplan’s story I lift the quotable quote below.

Quotable quote: ‘Folks, look, if you start off with the notion there’s nothing you can do, well, might you all go home then, man? Or let’s start a real, physical revolution if you’re talking about it. Because we have to be able to change what we’re doing within our system.

Yeah!  Power to the people, right on, man!

In the Trump Derangement Syndrome Department, President Trump even got Democrats to protest Independence Day, our military, and the flag, all at the same time!

Visit to the real world: Two M1 Abrams tanks, two Bradley Fighting vehicles, and one Hercules tank recovery vehicle were on static display on the mall.  A few of our top line aircraft flew overhead.  Shouldn’t Americans get to see what their tax dollars buy?  I thought Dems liked “transparency”?

The ”concentration camps” are temporary holding facilities never designed to hold people long term, badly overburdened because Democrats keep inviting illegals to enter the country illegally with promises of free stuff, and by their refusal to fix our insane immigration laws.  Know what one of our biggest problems is?  Bernie Sanders isn’t an up to date socialist:

Robert Samuelson writes sensible columns about the economy for the Washington Post. His latest column, less sensible than usual, is a contribution to the growing body of mainstream media musings about what socialism means and the extent to which various Democratic contenders favor it.

Samuelson argues that accusing Democrats of being socialists is a ‘slur’ because ‘we are all socialists now.’ What counts, says Samuelson, isn’t labels, but rather policy prescriptions. He concludes that Bernie Sanders falls short not because he’s a socialist but because his policy proposals are utopian and out of date.

Good advice. Perhaps he should have practiced it when he had the chance?  Eric “Nuke All The Gun Nuts” Swalwell has dropped out of the presidential race. Here’s why:

This one is far out, man!  The Times Standard reports:

Farmer Tom O’Gorman, a self-described “old hippie” who took part in the 1970s back-to-land movement, admits he matches the profile of a cannabis grower, right down to his large greenhouse in rural Willow Creek, along with the notice he received earlier this month to shut down his illegal marijuana operation.

Just one issue with that picture: O’Gorman says that while he fully supports cannabis legalization, he’s never grown the plant himself. The Trinity River Farm he owns harvests fruits and vegetables as well as local jams, jellies and sauces.

But O’Gorman’s greenhouse is large enough to have been flagged on Humboldt County’s satellite mapping system, the same one that helped the county increase its cannabis code enforcement by 700% in 2018.

It’s all turned out fine for O’Gorman, who received a retraction from county officials about a week after the mishap. But the day he received his abatement notice was quite a bit more stressful.

‘I asked the gentleman who served me the papers how he was doing,’ O’Gorman said. “He said, ‘I’m fine, but you might not be as well as you think you are.’ Then he handed me an abatement notice.’

Over the next week, O’Gorman heard from friends that he was mentioned in the classified pages of the Times-Standard, where the county publishes each abatement notice twice over. It was an embarrassing moment in an overall ‘unfortunate’ process, O’Gorman said.

Perhaps a real human being might have actually stopped by to see what O’Gorman was actually growing? But noooooooo! Technology is all knowing, all seeing. The good folks at Powerline tell us why Bernie Sanders is such an odds-on favorite to be the next POTUS: 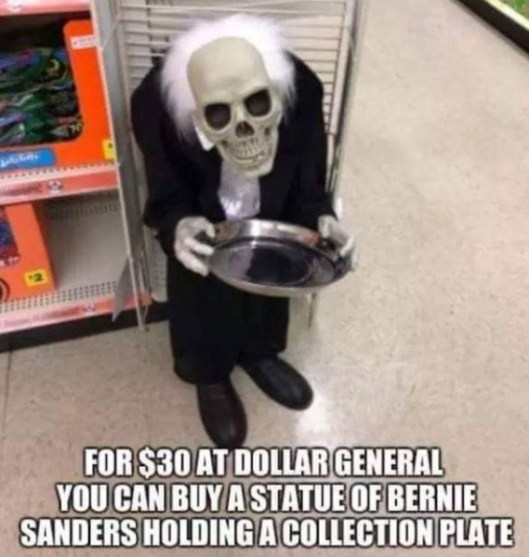 Finally, let’s hope someone will remind Bernie Sanders of this prescient quote from 2011:

These days, the American dream is more apt to be realized in South America, in places such as Ecuador, Venezuela and Argentina, where incomes are actually more equal today than they are in the land of Horatio Alger. Who’s the banana republic now?

Actually, Bernie, the banana republics.  Here’s an example of why Democrat presidential Candidate Marianne Williamson is so entertaining:

Here’s an example of why people love Congress about as much as, well, knee deep human feces and discarded syringes:

Democrat Rep. Frederica Wilson said people who are ‘making fun’ of members of Congress online should be ‘prosecuted.’

The Florida congresswoman made the comments on Tuesday outside of the Homestead Temporary Shelter for Unaccompanied Children in her home state.

‘Those people who are online making fun of members of Congress are a disgrace, and there is no need for anyone to think that is unacceptable [sic],’ Wilson said.

Actually it’s a shame people like Wilson are actually voted into Congress.  But here’s my favorite in the “nah, no one could have possibly seen thiscoming” department.  Brietbart Europe reports: 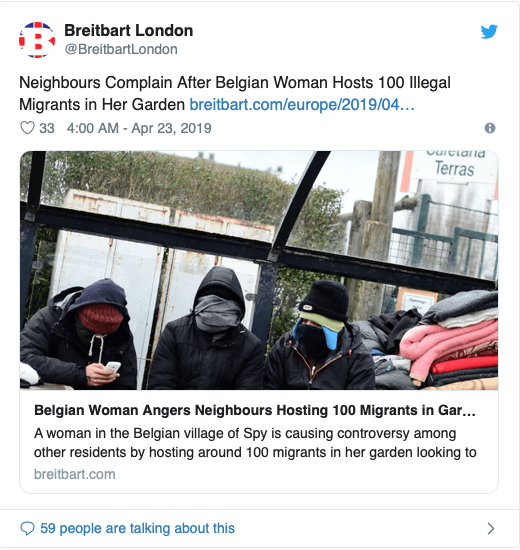 A Belgian woman who invited migrants to set up a makeshift camp in her garden now says she wants them to leave after incidents of aggression and violence.

For nearly two and a half years the Simon-Hody family have allowed migrants wanting to travel to Britain to camp out in their garden in the town of Spy, but now, after a series of incidents, they say they no longer want them there, Sudinfo reports.

The situation in the makeshift camp is said to have deteriorated so much that the family has stopped all aid to the migrants, saying that alcohol and violence led to the camp becoming more and more dangerous by the day, with one family member stating: “We did not feel safe anymore.