Who is Pete Buttigieg, and why isn’t his name pronounced “Butt-a-gig?” The “correct” pronunciation is apparently something like “Boot-ih-geej.”  No doubt it’s because the former is rather silly, and one can’t make fun of Democrats.  It’s rather like the family name “Outhouse,” pronounced “O’Toozee,” but for reasons of political purity and advantage rather than the avoidance of embarrassment.

His flag-waving gaytitude has led Buttigieg to viciously attack Vice President Mike Pence, the former Governor of Indiana, as an anti-LGBTQWERTY Christian fascist, as of course, all Christians must be.  It wasn’t always thus:

Buttigieg has complimented his former governor, too, recounting in his memoir a day in 2016 when he called Pence’s economic development plan ‘visionary.’ Pence returned the praise by saying South Bend was ‘so blessed to have an energetic, innovative, forward-looking, creative mayor.’

Pence has not responded in kind, and has been kind, as one can expect him to be:

‘He’s said some things that are critical of my Christian faith and about me personally. And he knows better,’ Pence said Thursday in a CNBC interview. “He knows me.” [skip]

‘I worked very closely with Mayor Pete when I was governor of the state of Indiana, we had a great working relationship,’ Pence said Thursday.

I get it, you know,’ Pence said of Buttigieg’s comments. ‘Nineteen people running for party on that side, in a party that’s sliding off to the left. And they’re all competing with one another for how much more liberal they can be.’ 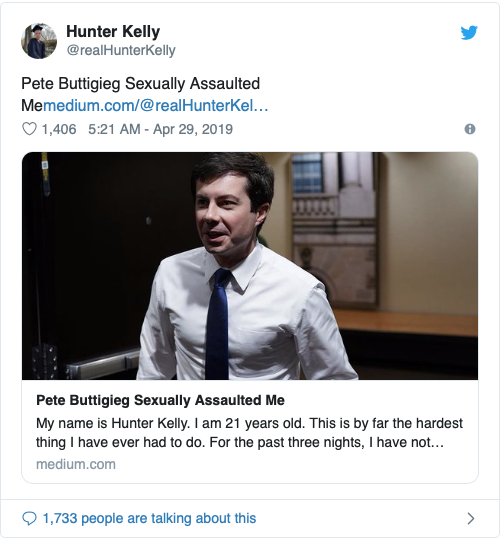 Buttegieg has also declared himself, with the fawning help of the Media, a political wunderkind and visionary. His abject failure to improve the lot of the citizens of South Bend is carefully obscured:

While Chicago is notorious for its murder rate, in 2015, Buttigieg’s South Bend actually topped Chicago’s 16.4 homicides per 100,000 people with a homicide rate of 16.79 per 100,000 people. Those numbers put Mayor Pete Buttigieg’s city on the list of the top 30 murder capitals in the country for the year. [skip]

The media’s bias has never been subtle, but its disinterest in a presidential candidate’s track record has never been this blatant. Mayor Buttigieg’s candidacy is being covered as if he weren’t the mayor of an actual city with actual problems. Instead his prospects have been covered purely in terms of his identity, a gay millennial, his past career before taking office, and his current witticisms and applause lines.

At no point in time does the media stop to tell the viewers and readers it is regaling with stories of Mayor Buttigieg’s charm that he runs the most dangerous city in Indiana, recently rated as one of the “worst cities to live”, where nearly half the residents live at the poverty level, and even the water is bad. [skip]

By 2017, shootings had risen 20% on Mayor Buttigieg’s watch. Rapes increased 27% and aggravated assaults rose from 183 in 2013, the year before Buttigieg took office, to a stunning 563 assaults.

It’s hard to know which are flying faster, bullets in South Bend or dollars into Buttigieg’s campaign. 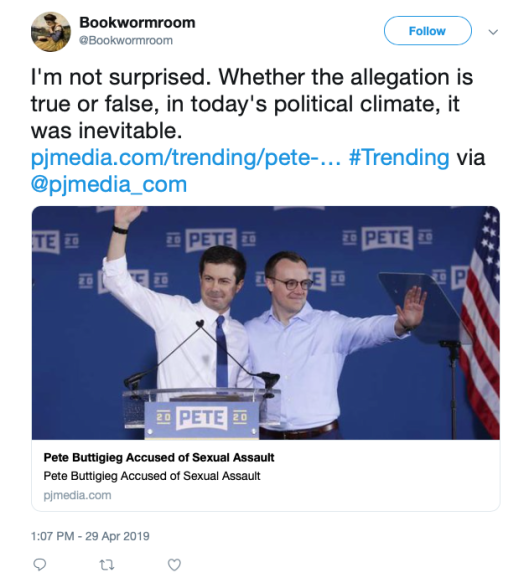 As Kurt Schlichter as noted, leftists are dimly beginning to understand they’re not liking having to live under the new rules they have imposed on everyone else.  Buttigieg was accused of sexual assault, but it appears that within a day, the accusation may have been proved a hoax.  Or maybe not…  Take the links, gentle readers, and see which you find more credible, as the media has already dropped the story. 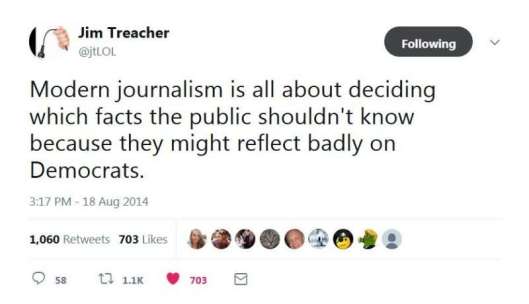 The Media surely don’t expend that kind of effort when a Republican is accused, but it’s different when it’s a Democrat, because shut up, and Pence, and as always, Trump.

Buttigieg, who current polls have running third, fourth or more behind Joe Biden and Bernie Sanders—for at least the next thirty minutes–is the Democrat/Media flavor of the month.  He’s a white male in a party rushing to leap off the nearest communist/diversity/inclusion/gender cliff, but he’s viable because he’s gay, and aggressively so, which explains his attacks on Vice President Pence, because all Christians hate gay people and want to put them in gay concentration camps and kill them, but only after they say mean things about them, and deprive them of their right to force Christian bakers to make them wedding cakes.  It is virtue signaling of a kind, but for the moment, sufficient to keep his political star on the rise even as last months flavor—the faux-Hispanic, skateboarding, histrionically gesturing Beto’s—star dies not with a cataclysm, but an “I’m greener than anybody!” whimper.

The problem with Buttigieg, besides his inexperience and much less than inspiring performance as the mayor of yet another chaotic, crime and drug-ridden Democrat-controlled city on a downward slide to Hell, is he is not a politician who happens to be gay, but a gay politician.

Americans are tolerant people; it’s built into the national character. They may disapprove of the gay lifestyle for religious or cultural reasons, but no one is suggesting they be denied the constitutional rights of all Americans.  What of a politician, lawyer, policeman, teacher who happens to be gay, who doesn’t exist to shove it in everyone’s face?  That’s not generally a problem.  What bothers normal Americans is gay people who see their sexual preference as a political movement, as a holy crusade.

It is these people who wrap themselves in the rainbow flag, exalting gayness.  They seek not equality.  They have that.  They have no fewer rights than everyone else, but that’s a problem for people like Buttigieg. They are not satisfied with equal justice under the rule of law.  They seek to be more than equal under the tyranny of social justice.  They are not content, as are normal Americans, to live and let live.  They demand normal Americans not only accommodate them in every way they prefer, but proclaim them uniquely virtuous, and praise their great courage and moral superiority.  They demand normal Americans—people who, regardless of political preference honor the Constitution and the rule of law—indoctrinate their children into the wonders of LGBTQWERTY life and politics.  Their ceremonies, their beliefs, their convenience, they self-image must take precedence over the lives, beliefs and faiths of bland, unenlightened, vanilla straights.  Trans men must be allowed to use any public bathroom they please, and to compete against women because they’re trans, and as such, are morally superior beings whose moral superiority straight people cannot understand, and thus fear, so the machinery of the state must be engaged to force them to speak, think, and act properly—for the benefit and progress of all, of course.

Were Pete Buttigieg merely a politician who happens to be gay, one could judge him on his accomplishments and campaign promises.  That would be the end of Buttigieg’s political hopes.  But he is, instead, a gay politician.  As such, he claims the moral/intellectual high ground.  He opposes any portion of the Constitution that would in any way hamper the complete vindication of the LGBTQWERTY agenda, and the rights of anyone else be damned–they’re all Christian fanatics like Mike Pence.

One would think Leftist politicians would have learned that insulting at least half the electorate, and promising to destroy the Constitution is not a winning strategy—at least not for the time being.