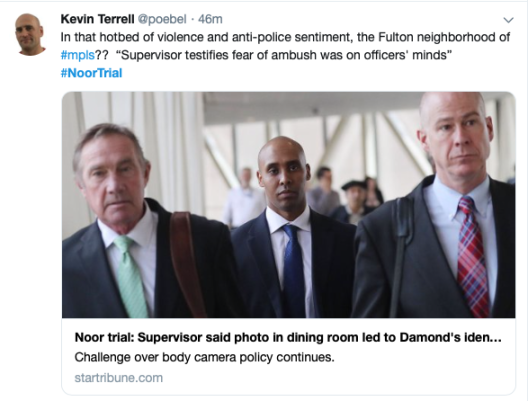 In this update, I’m going to step away from the courtroom for a while and comment on forensic and media issues.I’ll add an update Friday or Saturday about what has been happening in the trial this week.

The prosecution’s list of potential witnesses may be found here.   Keep in mind many of these will likely never testify, and one cannot draw any conclusions about the order of testimony by their placement on the list.  Criminal trials of this nature tend to be fluid affairs.

According to the defense, Justine banged on the officers’ squad car before Noor shot her. The prosecution suggests that the “bang” or “slap” was more or less invented by Sergeant Shannon Barnette, the senior officer first on the scene and therefore the critical incident officer managing it. Lofton asked whether ambushers usually warned the officer with a slap to their squad car. May hesitated before answering in the negative. 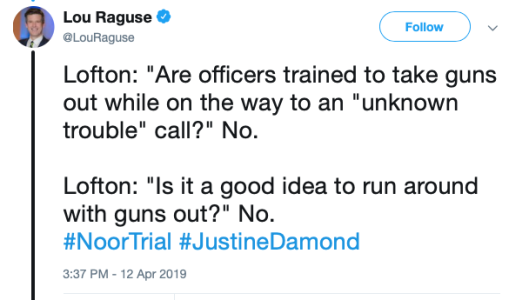 It’s clear the officers of the MPD are going to be protective of their own, even if they know—and any intelligent officer must—it was, in police jargon, a bad shoot.  This is not necessarily an attempt at a cover up, just a manifestation of the reality that officers know only they can fully understand the reality of the job, and also know politicians can turn on them in an instant.  As I’ve already noted, I expect the prosecution to treat Officer Matthew Harrity, unless he is completely forthcoming, as a hostile witness. 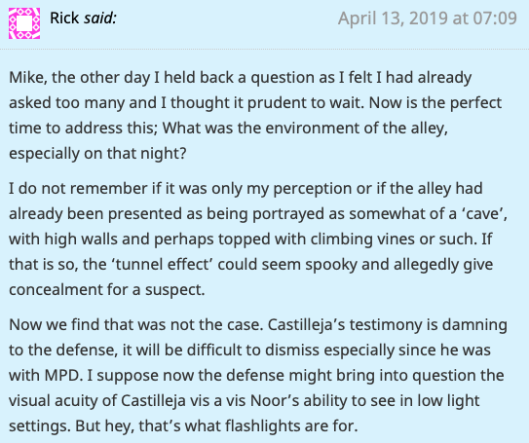 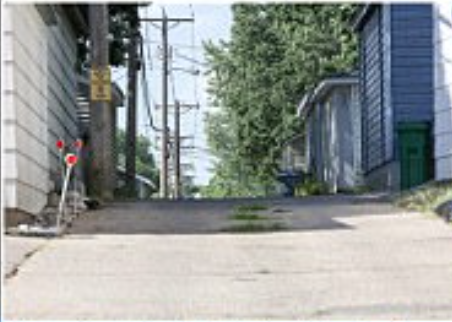 The alley where Damond was killed

The alley is of a type one might see in any long established midwestern neighborhood.  There are many old growth trees, though none like one sees in gothic, horror literature and movies.  Many such older neighborhoods have garages at the rear of the property, opening onto an alley.  Such alleys, particularly in good neighborhoods, commonly have streetlights at both ends, which was apparently the case here, though some photos taken after Damond’s death suggest an additional streetlight mid-alley.  They also commonly have a great many motion activated security lights on garages.  I cannot confirm this for this particular alley, but it’s a reasonable assumption. Were it so, there would have been activated security lights on many of the garages the officers passed, all brightly lit when Noor shot Damond.  I wonder if the BCA, MPD or prosecution thought of this? 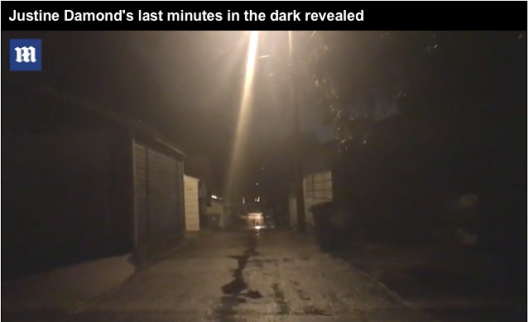 This photo, which I believe was taken shortly–days or weeks–after Damond’s death is apparently of the end of the alley where she died.  Keep in mind the camera “sees” light differently, and in more narrow focus, than the eye.  My years of police experience bear this out.  Anyone in that alley would have perceived it as substantially brighter than the photo suggests.  The night of Damond’s death was apparently a clear, warm summer night.  Noor and Harrity would have easily been able to identify individual people, and surely would have seen anyone approaching, if they were the least aware of their surroundings.  Everything currently known suggests they were not.

All known evidence provides no excuse for Damond’s death.  Any competent, reasonable officer should never have been caught by surprise in that well-lit alley, particularly if, as the Defense suggests, they expected to be ambushed every second.  The ambient lighting serves only to make Noor’s shooting even more inexplicable.

The Minneapolis Star-Tribune—“The Strib” to locals—is as reliable a leftist former newspaper as exists, a former newspaper upon which Leftist readers can count to produce the proper fake news.  One can count on its adherence to cherished socialist narratives to shape its coverage. That outlook is apparent in the Noor trial, as an excerpt from this article by Jennifer Brooks suggests:

In a Hennepin County courtroom, the jury studied a collage of crime scene photos and videos, listened to Damond’s voice on the phone with the 911 operator, and began the painful work of weighing evidence in a case that rips every raw nerve in the national debate over police shootings, court bias, race, immigration and press freedom.

Philando Castile lay dying before our eyes on a police dash camera, bleeding out on Larpenteur Avenue in Falcon Heights while officers did chest compressions. Tamir Rice, 12 years old and playing with a toy gun in a park in Cleveland, died on camera too.

If this police shooting — the one with the white victim and the black cop — feels different from the others, it’s worth asking yourself why.

This case has nothing whatever to do with “the national debate over police shootings, court bias, race, immigration and press freedom.”  That Brooks would think it does is indicative of laziness, a lack of interest in researching the kinds of events she references, honestly reporting them, and leftist bias, perhaps all four.  I’ve not covered the Philando Castile case, primarily because I didn’t find it particularly interesting.  It was a case of an officer who may, or may not, have been justified in shooting.  This Wikipedia account is reasonably accurate.  The officer involved was charged with multiple felonies, and was eventually acquitted.  The system worked as designed, and while Castile was black and the officer not, race played no role in the case, nor did any of the other factors mentioned by Brooks.

I did cover the Tamir Rice shooting with a single article.  Rice was black and the officer that shot him was white, but again, race, and the other factors, played no role whatever.  Had Rice been white, he would also have been shot.  Brooks’ misleading comment about a “toy gun” link is purposely misleading.  Take the link to see what I mean.

Police Shootings: the media would have us believe there is an epidemic of white police officers murdering young black men and getting away with it.  This is false in every particular, as this article helps to explain.  Even The New York Times noted  the narrative is false, and more, that police officers are less likely to shoot black people than white people. There is surely no epidemic of black officers shooting white women.

In the Damond case, race is irrelevant. Noor had no idea if the “frame” or “silhouette” he was shooting was male or female, black or white, human or animal, real or a figment of a terrified imagination.  Race is a part of this “national debate,” only because the left—the media—are obsessed with that narrative, which begins and ends with all white people being racist.  Were Noor white, he would—should–have been charged all the same.  Noor’s protected victim status in Minneapolis actually made it more likely he would not have been charged, as I initially feared.

Court Bias: it’s not entirely clear to what Brooks refers. The court, in the Damond case, seems, if anything, more deferential to the Defense than the Prosecution.  I suspect, however, Brooks is referring to social justice rather than the rule of law.  By the rules of social justice, Noor would never have been charged.  He would have been, as he was from the beginning of his police career, lauded for his altruism and many splendid qualities, those qualities being primarily that he is Black, Somali and Muslim, three intersecting narratives that should, in a social justice world, render him immune from the consequences of his actions, and would in Minneapolis had he not produced a corpse.

That he has been charged is an outrage to the socially just.  If he is convicted, that can only confirm the horrible court bias that denies social justice to Black men.  That he has been afforded every right under the rule of law—which Leftists routinely seek to deny non-leftists–matters not.  Social justice does not allow such worthies to be held responsible for their actions.  Justine Damond ended up bleeding out in an alley, but she was white—not a member of a favored victim group–so too bad, so sad; implementing social justice requires sacrifices.

Race:  As I previously noted, conversations or debates about race have been a particular plague inflicted on Americans since the beginning of the Obama Administration, whose minions would not stop hectoring Americans. Never in history has there been a country less racist, more free, with more opportunity for all, than America circa 2019.  Such conversations are anything but, beginning with the premise that all non-Black people are racist, and ending with such people being angrily denounced as racist and white supremacists/nationalists to boot.  The very fact that non-Blacks will not recognize, admit, and do whatever socialists demand to atone for their unrecognized and unconfessed racism is the most compelling proof they are racists and must do whatever socialists—for that is what contemporary Leftism has become—demand they do to atone for their racism.

Despite all evidence to the contrary, such as the indisputable fact that no one is more dangerous to a young Black male than another young, Black male, the media narrative must be believed, and never abandoned.  Race had no role in the Damond shooting, none, yet Brooks can’t help herself.  Noor is Black, Damond was white, so race just has to be a defining feature of the story if for no other reason than a Black person was involved. Actually, that’s more than enough.

Immigration: Noor is a legal immigrant and naturalized citizen. How is immigration involved in this case?  Obviously, it is not, except that it is being stretched to fit the media narrative that Americans are xenophobic haters of immigrants, and Noor is only being prosecuted because he’s Black, Somali, Muslim and an immigrant.

Americans have nothing against legal immigration, and sympathize with those who wish to come to America to improve their lot and the lot of their families.  However, they do not agree with illegal immigration.  They support the rule of law, rightly recognizing it as the foundation of our representative republic.  None of this well comports with social justice.

If anything, one should understand that for a Black Somali Muslim to be arrested and charged with murder in Minneapolis does not, for a moment, suggest racism.  On the contrary, it suggests his crime was so egregious, so obvious and such bad press, an invaluable member of three Leftist protected victim groups could not be excused—this time.

Press Freedom: one is tempted to ask “what the…?!”  How is the freedom of The Strib—or Brooks–being, in any way, infringed in this, or any other story?  Because I, and others, are calling out their narrative-driven and opinion laced news reporting?  Don’t you know, gentle readers, any criticism of the press is a blow against Democracy?  People like Brooks are noble and immeasurably valuable.  How dare we criticize them or point out their errors and biases?  Who do we think we are—Americans with First Amendment rights?  Those are only for the press who protect the First Amendment, so they can smear and defame anyone they don’t like, or with who they disagree.

Feeling Different:  Leftists are all about feelings, not evidence, particularly when the feelings maintain cherished narratives.  They invent their own reality and demand we all live in it.  The Damond case is different only in that it is a straightforward case of murder, and race is not in any way involved.

Things to keep in mind, gentle readers, as you follow the Noor trial.  I’ll have a summary of the week’s events on Friday or Saturday.

17 thoughts on “The Justine Damond Case, Update 32: Things To Keep In Mind…”