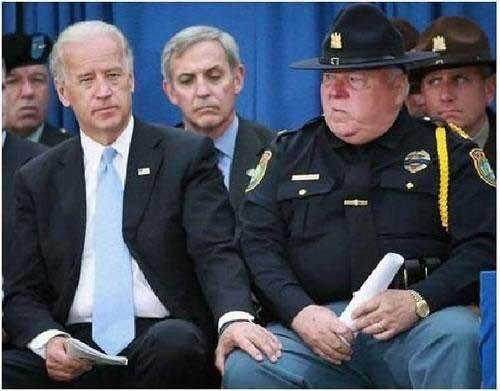 As I’m sure you know, gentle readers, former Obama Vice President Joe Biden is considering a presidential run.  If he runs, it will be his third attempt to seize the Oval Office. And as I’m sure you also know, at least seven women—thus far; the number increases by the day—have accused him of sexual impropriety.

As it happens, I’ve been writing about Biden since 2013, not only because of his very creepy tendency to paw women and little girls, to say nothing of his tendency to swim nude in front of female members of his Secret Service detail, but because of his bizarre and dangerous advice regarding the Second Amendment and self defense, advice which, if taken, could easily see one tried for murder. Those articles are:

Biden has issued several non-apology apologies to the allegations, all like this:

In my many years on the campaign trail and in public life, I have offered countless handshakes, hugs, expressions of affection, support, and comfort. And not once – never – did I believe I acted inappropriately. If it is suggested I did so, I will listen respectfully. But it was never my intention,’ Biden said Sunday. ‘I may not recall these moments the same way, and I may be surprised at what I hear. But we have arrived at an important time when women feel they can and should relate their experiences, and men should pay attention. And I will.

Kurt Schlichter said: Democrats won’t like the new rules they are imposing, and he’s right, but there is a qualification.  Democrats obey only those rules convenient in damaging their political enemies.  It was often observed that all of Barack Obama’s promises had invisible expiration dates.  Some expired before he made them, like the “if you like you doctor, you can keep your doctor,” lie.  Contemporary Democrats/Socialists write all their promises in invisible ink.  No rule—or law—applies to them, and to their favored victim groups, unless they want it to.

One might think this hypocrisy, but it’s not. Without the enlightened guidance of our moral and intellectual betters, we would engage in wrong think and vote for the wrong people.  We would also think ourselves capable of determining what is best for us.  How silly we are.  Obviously, they need the freedom to direct us, for our own benefit, of course. 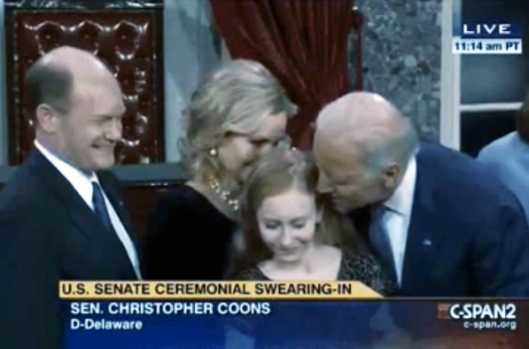 Another angle of happiness…

Biden’s problem is the “#MeToo” rule imposed during the Kavanaugh affair, which was noting at all like the Biden mess (to find every Kavanaugh article, merely enter “Kavanaugh” in the SMM homepage search bar).  The hashtag comes with a variety of rules, including:

2) All women must be believed, forget that due process and presumption of innocence nonsense!

3) Evidence is irrelevant.  If a woman complains, none may question her credibility, truthfulness or motives.

4) Anyone that questions a woman’s credibility, truthfulness or motives is sexist, hates women, is a racist, and a racist, sexist woman hater who hates women.

6) Any woman’s complaint absolutely disqualifies the male—Republican–target from attaining or occupying any political office, judgeship, job, career, or membership in American society.

7) Any accused man must prove himself innocent, and there can be no proof of his innocence. Accusation = conviction.

As we’ve learned from recent experience in Virginia, past—or present—racial and sexual impropriety does not require the removal of Democrat politicians, particularly where their removal might turn control of a state over to Republicans.  Socialist’s new rules never apply to them, or do, as in the case of Al Franken, only when it’s politically convenient. 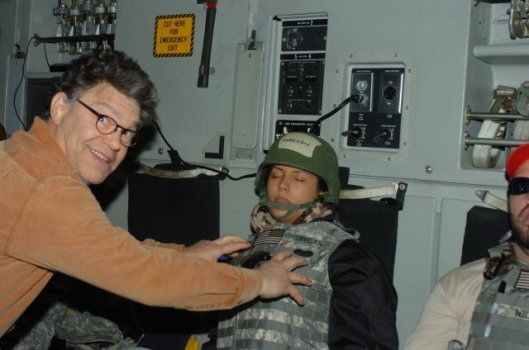 As regular readers know, I’m not at all politically correct, however, I do my best to be sensitive to the needs and feelings of others—particularly women.  I don’t always succeed, but I am aware of it, and I do try.  When I gaze in the mirror, perfection never gazes back.  Therefore, I tend not to reflexively think people accused of this or that are guilty and ought to be punished.  My years playing cops and robbers taught that people—even women!?–lie about all manner of things for all manner of reasons.  Witnesses are often unreliable—some purposely, some innocently—and things are not always what they, at first, seem.

Fortunately in the case of Joe Biden, there is voluminous photographic evidence of his tendency to put his hands on women and girls—and the occasional man—in ways that would make any woman’s skin crawl. Biden’s bad touching is no surprise to anyone in the media, nor to any American that has been paying attention. I offer, particularly, the above photo. At the moment it was taken, the woman involved did not appear to be uncomfortable (she was sitting in a chair in front of Biden, not on his lap), but notice the two guys in the frame.  One suspects one of them was her husband or boyfriend, and their expressions clearly communicate that Biden stepped over the line of propriety.  He escaped injury only because of his position, and the presence of his Secret Service detail.

The #MeToo fervor, when applied for political reasons, is nonsense, and unnecessary.  We have a mostly functional criminal justice system  for actual crimes, and Americans are more than smart enough to figure out who is fit for political office.  Character is important, to be sure, but fidelity to the Constitution, and to America, is more important, which is why Donald Trump is President, and socialist heads continue to explode.

The timing of these—two thus far—sacrosanct female complaints against Gropin’ Joe is, of course, suspect.  Joe is simply too white, too old, and too Democrat for the contemporary, Socialist, Democrat party in name only.  His time has come and gone, and they’re not going to give him the nomination.  As far left as he is, he’s not nearly left enough.

Does she look pleased to have Joe’s hands on her?

News reports suggest big donors are refusing to bankroll his campaign, and he seems to have no hope of inspiring the number of small online donors necessary.  Even so, he has some supporters, who are claiming it is Republicans that are trying to derail him.  Even most Democrats aren’t buying that one.  Actually, most Republicans would love to have Joe Run Against Trump.  Some even suggest all the photos of Biden’s hands on inconvenient females are photoshopped.  Stephanie Carter (above), the wife of then Secretary of Defense Ash Carter, has even said she didn’t consider what he did inappropriate. Biden pawed her during her husband’s swearing-in ceremony.  I’ll leave it to you to judge, gentle readers.  Does she look uncomfortable?  Would you, gentleman, let this go unanswered if it were done to your daughter or wife?

Part of the irony here is that Biden was involved in formulating, and was the foremost defender of, policies that turned blameless young college men into rapists in a preview of the #MeToo fraud.  The policies he defended trashed the presumption of innocence, as KC Johnson notes at City Journal:

Biden has been the most outspoken senior Obama administration figure to defend these policies. In a 2017 appearance at George Mason University, he framed campus sexual assault as a problem consisting solely of male attackers and female victims: ‘Guys, a woman who is dead drunk cannot consent—You are raping her! We’ve got to talk about this. Consent requires affirmative consent! . . . If you can’t get her to say ‘yes’ because she wants to, you ain’t much.’ He used an interview with Teen Vogue to give a hypothetical address to fraternity members: ‘If you see a brother taking a drunk freshman coed up the stairs to his room and you do nothing, you’re a coward . . . You know that she’s not able to give consent.’

Biden responded with fury to Secretary of Education Betsy DeVos’s attempts to create fairer procedures for adjudicating campus sexual-assault claims. In a September 2017 conference call with victims’-rights activists, the former vice president derided DeVos’s supporters as ‘culturally Neanderthals.’ Biden’s approach to campus sexual misconduct effectively reverses Blackstone’s central premise of common law: to undo the injustices of the past, this new tenet holds, it is better that 10 innocents suffer than one clearly guilty student escape. If this approach requires a presumption of guilt that sweeps up the innocentand the almost-certainly innocentas well as the guilty, that’s a price that society (and, of course, the innocent) must pay.

Should these allegations disqualify Biden from seeking the presidency? Playing by Biden’s rules, and the rules of the #MeToo inquisition, of course they should.  Biden is guilty, guilty, guilty!  He must prove himself innocent, and there can be no such proof. Leftists, who delight in bayonetting their wounded on the field of battle seem determined to stab poor Ol’ Joe, who was just being Joe, after all.  No absolution for him.

Of what is Biden guilty?  Using his position and power to grope innumerable women and girls.  I can state without reservation that had Biden—or anyone—touched, and/or invaded the personal space of, any woman about whom I cared, we would be, at the least, having a serious conversation about proper conduct toward women.  Biden has lived more than long enough to understand that one does not put his hands on women unless he is absolutely certain such touching, in position, duration, and context, is unquestionably welcome, and there is no excuse for—as one woman who must be believed has alleged– hair sniffing, nuzzling and kissing.

But he’s just being Joe! He’s a man of a past generation!We have to cut him some slack.Wrong.  He’s an overly familiar lecher who uses his position—and the protection of the Secret Service–to impose himself on others. He’s a life-long politician.  He knows how society has changed since his youth. He knows the rules of polite, civilized social intercourse, and he has arrogantly chosen to ignore them for cheap thrills at the expense of others.

But can’t he swim as he likes in his own swimming pool? Actually, he’s gone naked there, and in government facilities as well.  But why should he be denied a pleasure others can have in private?  Because he has to set a higher standard.  Because it’s enormously rude.  Because he knew when he took the job as VP, he’d have a Secret Service detail for life. Because one does not expose oneself to women—even Secret Service agents–under any pretext.  This is just another example of Biden using his position and power at the expense of others.  How hard is it to wear swimming trunks around female agents?  I’m no prude, but I wouldn’t go naked around other menin such settings, and certainly not around women.  Showering in the locker room is one thing; this is entirely different.

In other photos, Joe’s hands are much higher…

Groping is a long-standing male Democrat position. Teddy Kennedy, Bill Clinton, and innumerable others have assumed it their right to use women as they pleased. Biden is no different, and no less contemptible.  A decade ago, he’d be the Democrat frontrunner.  Today, times have changed.  Ironically for Gropin’ Joe, most Democrats would have even more protection than in the past for this kind of misbehavior, but he’s a fossil, not sufficiently leftist, and too dumb to recognize it, though he has promised to listen.

Biden, a plagiarist, has been wrong on virtually every issue of significance in the past half-century. If that, and his groping aren’t sufficient, should you, gentle readers, need a real and significant reason to think Biden unqualified for the presidency, visit this story of Biden’s abuse of power on an international scale.  We could not have put Donald Trump in the White House soon enough.

Update, 040419, 2120 CST:  For an absolutely great spoof video of Biden–President Trump apparently has something to do with its production or distribution–visit Legal Insurrection here.