Progressives are all about diversity, but there will never be a female NFL quarterback or lineman.  Biological reality, which determines who wins and who makes money, overrides all considerations of equality and gender.  It doesn’t matter what a given girl or woman identifies as, what matters is whether they have the strength, size and experience necessary to justify their salary in professional football, to sell merchandise and pack the stadiums.[skip]

Unfortunately gender, more specifically gender dysphoria, is now taking precedence over every other consideration in sports, and even over women’s issues.  Progs that have loudly claimed to vigorously oppose the Republican “war on women,” are now bayonetting wounded women on the cultural, athletic battlefield… 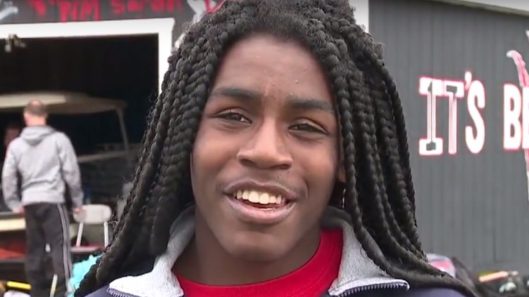 Once again, gentle readers, we hear of Andraya Yearwood, but this time, Andraya isn’t totally dominating biological female athletes.  Andraya is losing to a faster, stronger male pretending to be female. The Washington Times reports:

Andraya Yearwood hears the comments, usually from adults and usually not to her face.

She shouldn’t be running, they say, not against girls.

Yearwood, a 17-year-old junior at Cromwell High School, is one of two transgender high school sprinters in Connecticut, transitioning to female.

She recently finished second in the 55-meter dash at the state open indoor track championships. The winner, Terry Miller of Bloomfield High, is also transgender and set a girls state indoor record of 6.95 seconds. Yearwood finished in 7.01 seconds and the third-place competitor, who is not transgender, finished in 7.23 seconds.

Remember, that’s a state record for girls, not boys.  The current boy’s record is 6:30.  The difference is an eternity in sprints.  In a boy’s race, Miller and Yearwood would not have earned a medal, being relegated to the ranks of also-rans.

Critics say their gender identity amounts to an unfair advantage, expressing a familiar argument in a complex debate for transgender athletes as they break barriers across sports around the world from high school to the pros.

Gee, why would critics say that sort of thing?

‘I have learned a lot about myself and about other people through this transition. I always try to focus most on all of the positive encouragement that I have received from family, friends and supporters,’ Yearwood said. ‘I use the negativity to fuel myself to run faster.

How noble and sportsmanlike of Yearwood.  Interesting that a faster boy/girl beat him/her.  One wonders how he/her beat Yearwood?  Negativity?

Yearwood acknowledges she is stronger than many of her cisgender competitors, but says girls who are not transgender may have other advantages.

‘One high jumper could be taller and have longer legs than another, but the other could have perfect form, and then do better,’ she said. ‘One sprinter could have parents who spend so much money on personal training for their child, which in turn, would cause that child to run faster.

Yearwood knows better than that. Yearwood is a winner because he’s a boy competing against girls, which is precisely what he wants to be and do. The rest is so much politically correct tripe.  The boy that beat Yearwood was no less hypocritical:

Miller, who declined to be interviewed for this story, has said that if she felt a competitor had an unfair advantage, it would simply push her to try to improve.

Miller is playing people for suckers.  Male athletes on an essentially equal footing can work harder and improve by a few hundredths of a second, perhaps enough to win, but even that is rare.  In sprints, athletes are often at the peak of their abilities; they don’t have the genes to do better.  Trying to improve won’t help.  But there is no way girls competing against boys can do that, short of magically transforming themselves into biological males.  What’s that you say?  Girl’s can’t do that?  They can’t skirt biology like boys pretending to be female?  That’s why girls “transitioning” to male aren’t winning men’s athletic competitions?  What a coincidence.  What do the girls that compete against Miller and Yearwood have to say?

One of their competitors, Selina Soule, says the issue is about fairness on the track with wider implications. The Glastonbury High School junior finished eighth in the 55, missing out on qualifying for the New England regionals by two spots.

Soule believes that had Miller and Yearwood not run, she would be on her way to race in Boston in front of more college coaches.

‘We all know the outcome of the race before it even starts; it’s demoralizing,’ she said. ‘I fully support and am happy for these athletes for being true to themselves. They should have the right to express themselves in school, but athletics have always had extra rules to keep the competition fair.

In high school track, runners generally know who is likely to win.  The difference is even the best can have a bad day and slower runners can have a good day.  No one is eternally unbeatable, just nearly so.  But when boys compete against girls, girls know there is no point; they can’t win. Even a fast boy having a bad day is going to beat them, particularly in sprints where the margin of victory is commonly measured in hundredths of a second.  Go here for some comparative statistics on male vs. female performance.

Connecticut’s high school sports governing body is hiding behind an anti-discrimination law.  Notice this weak argument twisted into a pretzel to feign rationality:

‘This is about someone’s right to compete,’ executive director Glenn Lungarini said. ‘I don’t think this is that different from other classes of people, who, in the not too distant past, were not allowed to compete. I think it’s going to take education and understanding to get to that point on this issue. 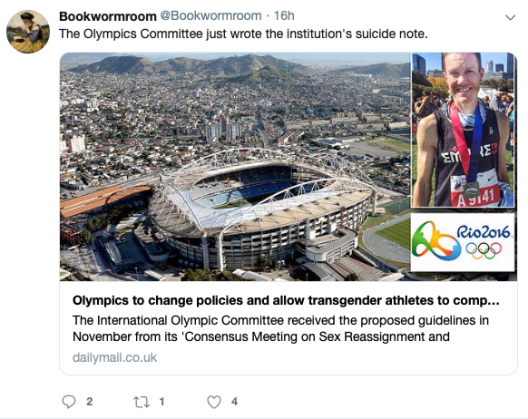 Of course. It’s just like black athletes not being allowed to compete in the past.  Except Jessie Owens didn’t try to compete against girls, and neither did Jackie Robinson. No amount of “education and understanding” will get beyond the reality that gender is not a matter of preference, and boys pretending to be girls to dominate actual girls, is fundamentally unfair and cruel.   It’s selfish and pathetically egotistical.  Where’s the sportsmanship in that?

Oh, and what is this “right” to compete?  Where in the Constitution might that be found?  What about the rights of kids who aren’t tall, strong and fast enough?  Should we handicap those who are so the less gifted kids, as in Harrison Bergeron, can compete?

The article also speaks of addressing the issue by a sort of scientific measuring of hormone levels.  And that particular “science” is sufficiently well developed to eliminate unfair advantages?  Unlikely. In fact:

Lungarini said the state organization is not in a position to perform hormone testing of athletes and simply relies on the schools to tell them who identifies as male or female.

Yearwood’s coach, Brian Calhoun, said his runner also matters. As Yearwood kneeled behind a teammate, braiding her hair between races at another recent meet, Calhoun said the track team and community have provided the runner with a safe, welcoming place to be.

‘There’s never been an issue in our town,’ he said. ‘These kids, many of them have known Andraya since elementary school. They know who she is. So when she signed up, the attitude was: ‘OK, Andraya is running with the girl’s team. Here we go.’

Yes. “Here we go,” more likely to win track meet team titles because we have a male ringer. Yay team! No one is saying Yearwood, Miller, and others like them don’t matter.  They’re saying all the girls in the state of Connecticut trying to compete in track matter too, and perhaps, just perhaps, their rights, their ability to gain satisfaction for all their hard work and sweat matter just a tiny bit more than the desires of a few confused boys, and the virtue signaling of leftists exploiting their gender dysphoria for their own cynical political ends.

Reality matters too.  Boys do not compete directly with girls in most sports because they enjoy a biological advantage such that it is patently unfair to girls.  This is why we have girl’s sports, because normal Americans, unlike the Left, recognize two genders which have easily observed and defined differences, therefore in physical competitions, men have the advantage.  If that’s not true, why not abolish all gender specific sports? Because girls, with few exceptions, would be entirely excluded.  Because they couldn’t compete, they’d lose their right to compete. That wouldn’t be very fair, now would it? 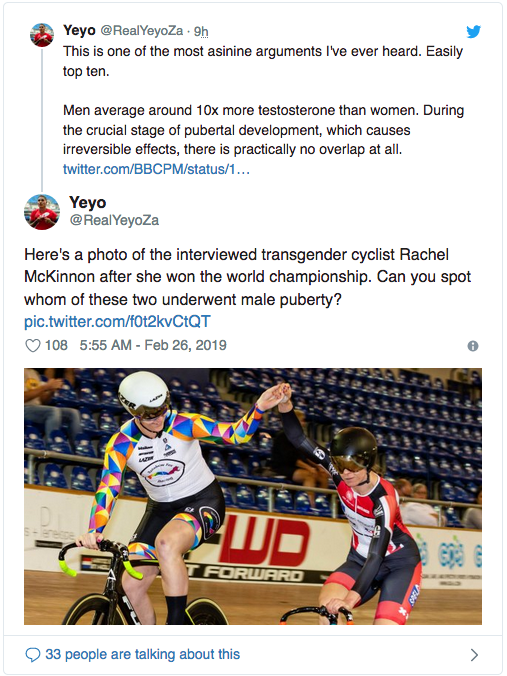 It’s not just in high school track. Guess which rider is Trans…

But if people like Yearwood and Miller can’t compete, it’s unfair!  Nonsense on stilts.  They can compete: as boys.  It’s their choice to take hormones that diminish–or pretend to diminish–their obvious male characteristics, to make themselves uncompetitive in boy’s athletics. If they make that choice, they should have to live with it, not switch to a sport where they can beat girls because they’re not good enough to beat boys.  Why didn’t Miller simply try to improve?  Wouldn’t that have been easier? Yearwood and Miller are inherently cowardly, inherently dishonorable, and absolutely unsportsmanlike.  They, and their enablers make a mockery of the often-lauded nobility, grandeur and character-molding qualities of sports.  Why should people who decide to pretend to be the opposite gender, or some other fanciful gender, be exempt from the consequences of their choices?  Who else is so blessed?

Miller and Yearwood can, and surely will, brag about beating girls. No real man, and no real woman will find that laudable.  It is now, as it always has been, cruel to the girls Miller and Yearwood pretend to be, and inherently inequitable.  Aren’t Leftists supposed to be all about equity?

They’ll discover soon enough that high school athletic glory is the most fleeting glory of all.  Miller and Yearwood will not be competitive with male college sprinters.  They are not going to get college athletic scholarships. Out there in the big, wide world, they’ll find they are no one special, and their gender dysphoria will not gain them attention, praise or fortune.  They have chosen lives of masquerade, and all they’ll have to console themselves in years to come are a few little medals won by dishonestly competing against girls, and virtue signaling Connecticut leftists to thank for it.