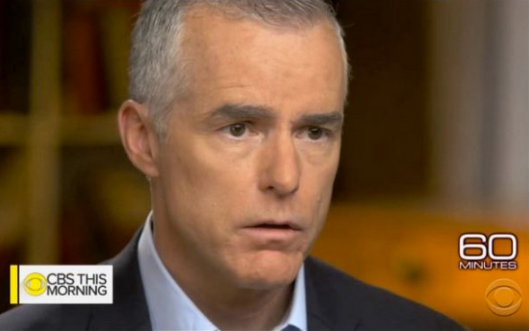 Edgar Hoover was one of the most feared men in America—but mostly by politicians–one who kept voluminous files.  I’ll not shed tears over such people. I am unaware, however, that he ever conspired to depose a lawfully elected President of the United States.

Former Deputy FBI Director Andrew McCabe is a known liar, dismissed from the FBI—vying with the DOJ for the title of the most virulently anti-constitutional, anti-trump federal agency–for lying. However, one might find a few things he has to say credible, as The Hill reports:

Former acting FBI Director Andrew McCabein a new interview reveals new details of the investigations into President Trump, telling CBS that there were conversations about the possibility of removing Trump under the 25th amendment and confirming that Deputy Attorney General Rod Rosensteinhad offered to wear a wire around the president.

McCabe spoke to “60 Minutes”for an interview ahead of the release of his book, “The Threat: How the FBI Protects America in the Age of Terror and Trump.”

CBS News’ Scott Pelley appeared on ‘CBS This Morning’ Thursday to discuss his interview with McCabe, saying that McCabe told him about the efforts to figure out ‘what to do’ with Trump during the eight days between the firing of then-FBI Director James Comey and the appointment of special counsel Robert Mueller.

“What to do?!”  You do nothing, Andy.  He’s the lawfully elected POTUS with full constitutional authority to fire James Come and anyone else in the Executive Branch.  You shut the hell up and honor your oath of office. 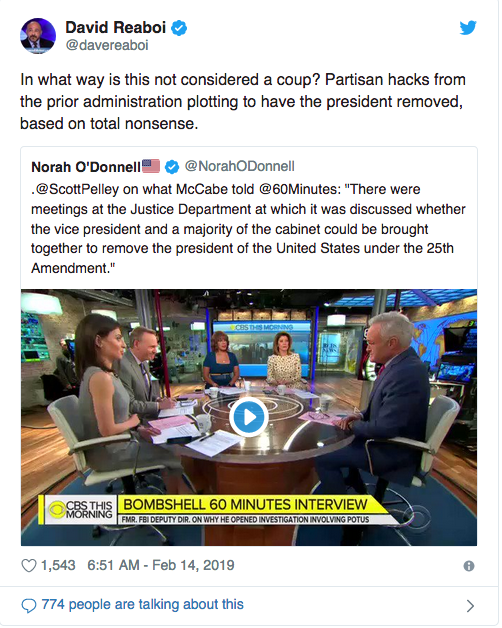 There were meetings at the Justice Department at which it was discussed whether the vice president and a majority of the Cabinet could be brought together to remove the president of the United States under the 25th Amendment,’ Pelley said Thursday. ‘And the highest levels of American law enforcement were trying to figure out what to do with the president.

What I said a paragraph ago.

Pelley says that McCabe said that Rosenstein’s offer was serious and it happened more than once.

‘McCabe … says no, it came up more than once and it was so serious that he took it to the lawyers at the FBI to discuss it,’ Pelley said.

It sounds rather like it’s time to bring in those lawyers, and everyone else with any knowledge whatever of this criminal coup attempt, put them under oath, and get to the bottom of this.  Anyone lying or refusing to talk should be immediately fired and stripped of all benefits.  A great many people, including McCabe, need to be in prison if the FBI, DOJ and American government are to retain any credibility, to say nothing of the American people’s voluntary willingness to recognize their authority.

If two or more persons in any State or Territory, or in any place subject to the jurisdiction of the United States, conspire to overthrow, put down, or to destroy by force the Government of the United States, …they shall each be fined under this title or imprisoned not more than twenty years, or both.

McCabe has arguably admitted to this, and I’m sure people more familiar with federal law than I can find additional applicable criminal statutes.  At the very least, everyone involved should be fired, denied all benefits, and never allowed to work in government, in any capacity, again.

In an excerpt of the interview that aired Thursday on ‘CBS This Morning,’ McCabe told Pelley that he ordered an obstruction of justice probe into Trump immediately after Comey’s firing in order to document and protect the investigation due to concerns it may ‘vanish.’

‘I was very concerned that I was able to put the Russia case on absolutely solid ground, in an indelible fashion,’ McCabe told Pelley. ‘That were I removed quickly, or reassigned or fired, that the case could not be closed or vanish in the night without a trace. 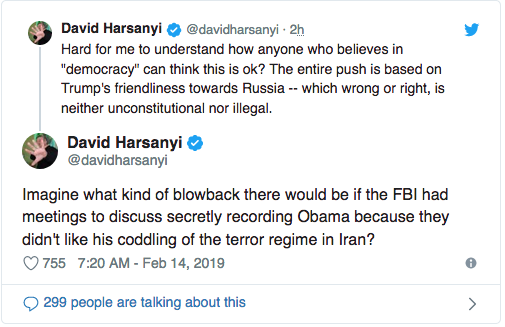 Leftists have been screaming “Trump doesn’t trust the FBi or the DOJ, or the Intelligence agencies!  Doom! Destruction!”  I suspect Mr. Trump has been aware of this—and worse—for a very long time.  Presidents know things we don’t, gentle readers.  How can he trust anyone at these utterly corrupt agencies?  How can we?

But McCabe might be lying! He might, but it’s hard to imagine what his motive might be.  He’s confessing to establishing multiple fraudulent investigations as part of continuing conspiracy to prevent the election of and then, overthrow a lawfully elected POTUS.  As one might imagine, Mr. Trump is not impressed, as Fox News reports:

I was speaking to the man who had just run for the presidency and won the election for the presidency and who might have done so with the aid of the government of Russia, our most formidable adversary on the world stage. And that was something that troubled me greatly,”’  McCabe said in one excerpt, referring to a phone call he had with Trump on May 10, 2017.

Apparently Mr. Trump’s actions to reign in Russia, far greater than anything Barack Obama ever did, didn’t sink in with McCabe.  Also, a complete lack of credible evidence of such “aid” seems not to have registered with him.  But law enforcement wasn’t his self-confessed goal.

McCabe, who also details that phone call in his book, took the call from the president while members of the bureau’s Russia team were in the room. The call, according to an excerpt from McCabe’s book published in The Atlantic Thursday, largely focused on Trump allegedly celebrating the firing of Comey saying he was getting positive feedback for the decision.

So even then, McCabe was trying to get something on Trump.  It was never about investigating a crime.  There was never any probable cause.  It was always a political fishing expedition.  Everyone in that room that day also needs to be compelled to tell the truth.

Pelley went on to ask, ‘how long was it after that that you decided to start the obstruction of justice and counterintelligence investigations involving the president?’

‘I think the next day, I met with the team investigating the Russia cases,’ McCabe confirmed. ‘And I asked the team to go back and conduct an assessment to determine where are we with these efforts and what steps do we need to take going forward.’

This is hardly a surprise.  Americans often grouse about politicians and their lack of character and qualifications for their positions, nowhere more fervently, perhaps, than when a President is the topic of discussion.  But because they voluntarily embrace American constitutionalism, they do not engage in coups, soft or hard.  It is the nature of our system, and civilian control of the military, which is holy writ within our armed services, that prevents a hard coup. Soft coups are, in their way, more insidious, because they undermine confidence in government.  If Americans cannot believe their votes count, that there is not a two—or more—tiered justice system, if they come to believe they’re suckers for their adherence to American constitutionalism, the representative republic Benjamin Franklin wondered if we could keep is lost.

This is a common theme, but imagine if this sort of thing, but plotted against Barack Obama, a man who really did have anti-American contacts and sympathies, a man who damaged our allies and enriched and encouraged our enemies, came to light.  Democrats would be screaming for the heads of everyone involved.  They’d be wrapping themselves in the flag and patriotism, and wailing about the horror of it all.  Of course, when Democrats do it, it’s different because Trump, and as always, because shut up.

The probability remains that the FBI fired McCabe not because he was one of a very few highly placed bad apples, but to try to minimize damage to the FBI’s horribly tarnished reputation and to protect a great many other conspirators.  Is there any honor left at the FBI?  At the DOJ?  Does anyone working at either of those agencies—to say nothing of the rest of the federal government—accept any boundaries imposed by the Constitution or federal law, or do they all think themselves beyond the law, above it in their noble pursuit of socialist perfection?

Can any rational being now doubt the Mueller investigation was a fraud from the moment it was conceived?  It is also reasonable to wonder how many Democrat politicians are involved in the coup.  Surely the FBI and DOJ would not have proceeded unless they believed they had sufficient congressional cover to move against Trump?

At the earliest opportunity, Mr. Trump must clean house at the FBI and DOJ, and work his way down from there.  If he has to fire most of the federal workforce until he is left with a core of people who will obey the law and who recognize they are the servants of the American people, so be it.  It will take awhile to get the numbers back up, but people will be willing to deal with less service if the service they’re getting isn’t aimed at destroying America—and them.

Everyone involved in the coup, at any level, needs to be given a fair trial, afforded all rights under the Constitution, and if convicted, thrown into jail, and in an enlightened act of penology, the key must be thrown away.

If this isn’t done, a second civil war won’t be long in coming.  It’s long past time to drain the swamp, Mr President.