In writing about electric vehicles, I’ve often observed their greatest limitation is the current—and for the foreseeable future—mediocre state of battery technology.  Contemporary technology, the lithium-ion battery, has significant drawbacks, including a tendency to burst into flame, often explosively.  Batteries sufficiently powerful for EVs are also very dangerous, not only to first responders, but to mechanics, all of who need special procedures and tools to avoid electrocution.  There does, however, seem to be a glimmer of hope, if not on the horizon, perhaps on the other side of the planet, as Bloomberg.com reports:

To deliver an electric vehicle that’s cheaper, safer and capable of traveling 500 miles on a single charge, the auto industry needs a breakthrough in battery technology. Easier said than done.

Scientists in Japan, China and the U.S. are among those struggling to crack the code of how to significantly boost the amount of energy a battery cell can store and bring an EV’s driving range into line with a full tank of gas. That quest has zeroed in on solid-state technology, an overhaul of a battery’s internal architecture to use solid materials instead of flammable liquids to enable charging and discharging. The technology promises major improvements on existing lithium-ion packs, which automakers say are hitting the limits of their storage capabilities and may never hold enough power for long-distance models. 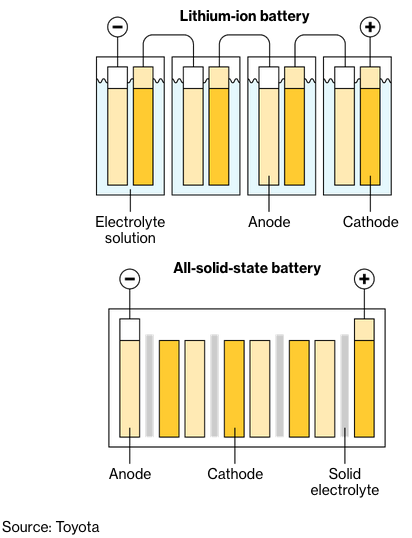 If it can be mastered, solid-state technology could help speed the demise of the combustion-engine car and potentially slash EV charging times to about 10 minutes from as much as several hours. The supercharger network built by Tesla Inc., now offering some of the fastest charge times, needs approximately 30 minutes to bring a depleted car to 80 percent.

“If it can be mastered.”  The remainder of the article speaks of great promise, but minimizes the technological barriers to success. The laws of physics remain immutable. It also suggests if anyone will do it, it will be Toyota, but I’m still waiting for the flying car I was promised in the 1950s If anyone can master that, it will probably be the Japanese.  As I’ve also often written, one of the greatest limiting factors for any EV is cold.  Cold weather dramatically impairs all aspects of battery function, increasing charging times and greatly reducing range.  This is why EV’s tend to be concentrated primarily in warmer areas of the nation like California.  There are political reasons for that concentration as well.  But for more information, gentle readers, let us visit zerohedge.com:

If there’s one thing electric vehicle owners are learning, it is that extremely cold temperatures are likely going to lead to frustration if they don’t take extra special care of their battery powered vehicles. Look at it as just another added benefit to ‘saving the world’.

As we push through the cold that automakers are using as an excuse for poor sales this winter, customers of some companies – notably Tesla – are starting to realize that things are a little bit different with electric vehicles in the winter. Disgruntled owners of Model 3s have been widespread on social media and online forums, talking about numerous issues they’ve had with cold weather on their vehicles. People have complained about battery range draining and Model 3 door handles freezing up.

A new report by Fortune highlights several Tesla owners pointing out their issues: ‘My biggest concern is the cold weather drained my battery 20 to 25 miles overnight and an extra five to ten miles on my drive to work. I paid $60,000 to not drain my battery so quickly,’ said New Jersey based Model 3 owner Ronak Patel.

The pro-EV lot over at InsideEVs stated frankly back in December, ‘Cold weather demands a long range battery’ before also encouraging people to shell out more money: ‘…if you reside in a colder region and can afford to spring for the long-range Model 3, then come winter, you’ll be glad you made that choice.’

This is not only a Tesla problem, though they have more than enough of those:

Salim Morsy, an analyst with Bloomberg, stated: ‘It’s Panasonic that manufactures Tesla batteries. It’s not something specific to Tesla. It happens to Chevy with the Bolt and Nissan with the Leaf.

The article does not mention a variety of other fundamental battery problems exacerbated by cold weather.  The soon to be defunct Chevy Volt’s heater, particularly in its earlier versions, was notorious, not only for being weak, but for quickly draining an already cold-depleted battery.  Any use of electric accessories like lights, turn indicators, radio, air conditioning, etc. also dramatically reduces EV range, even in optimum conditions.  Don’t get me started on hilly or mountainous terrain.  There are many stories of EV owners bundling up rather than using their heaters because when they did, their range was reduced so much as to make their vehicles all but useless.

Since the earliest days of EVs, range has, in some vehicles, sufficiently increased to more or less eliminate range anxiety, but only for short range commuting in areas with plentiful charging stations.  In other words, only tiny portions of the nation. Cold weather travel of distances easily and confidently traveled by conventional, far less expensive, vehicles remains impossible for EVs.

At 20 degrees, the average driving range [of EVs] fell by 12 percent when the car’s cabin heater was not used. When the heater was turned on, the range dropped by 41 percent, AAA said.

Of course, at 20 degrees you pretty much have to turn the heater on. That is a remarkable loss of functionality.

Also, AAA tested the vehicles at 20 degrees above zero, a balmy temperature that we haven’t seen for a while here in the Twin Cities. What happens at 20 below, a temperature we have seen several times in the last week or two? Or eleven below, which it is at this moment where I live? A car whose range is severely compromised at such temperatures could be a death trap. 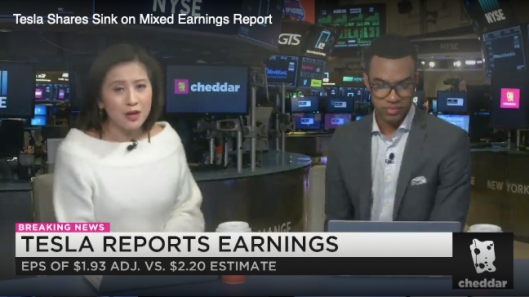 As if that were not sufficient trouble, Tesla is being pursued by the FBI, as arstechnica.com reports:

Tesla is reportedly undergoing a “’deepening criminal investigation’ by the FBI into whether the company misled investors with respect to production of Model 3 vehicles, according to The Wall Street Journal. The newspaper cited ‘people familiar with the matter,’ who said that federal prosecutors based in San Francisco have ‘intensified’ their work in recent weeks. Neither the FBI nor the United States Attorney’s Office in San Francisco immediately responded to Ars’ request for comment.

Kamran Mumtaz, a Tesla spokesman, sent Ars a statement, saying that earlier this year the company received a voluntary request for documents, which it complied with. ‘We have not received a formal subpoena, a request for testimony, or any other formal process, and there have been no additional document requests about this from the Department of Justice for months,’ the statement said. ‘Tesla’s philosophy has always been set to truthful targets—not sandbagged targets that we would definitely exceed and not unrealistic targets that we would never meet.

This might seem a bit disingenuous to Tesla customers who plunked down deposits for Model 3s they never received.  Tesla, in fact, has been forced to return a substantial number of those deposits.

I’ve long predicted the demise of the Chevy Volt, and that prediction has come true, not because of my psychic powers, but because no business can long afford to sell products that not only fail to make a profit, but that put them deeply in the red by the mere act of producing each and every unit.

As always, if anyone wants an EV, has the money for one, and can either use one as a second or third car while keeping a conventional vehicle for all the things EVs can’t do, more power—there’s irony—to them. Buy seven, one for each day of the week. That way one will always be fully charged—except in winter.

6 thoughts on “EVs: Except In Winter”