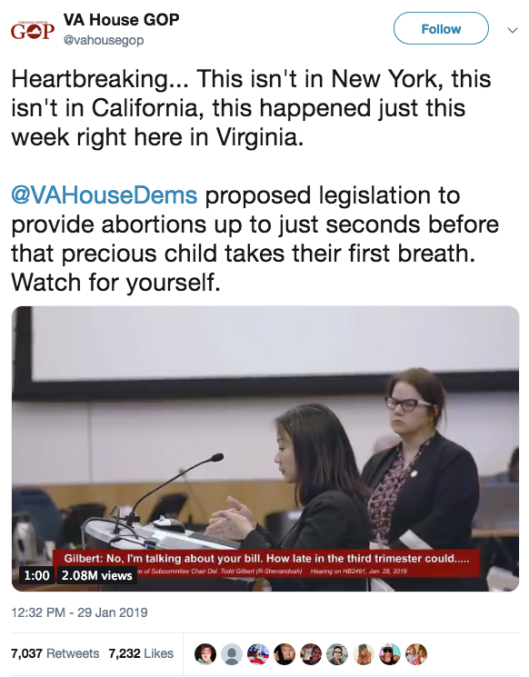 We need not create monsters; they’re alive and unwell in Virginia.

Abortion is a topic I’ve generally avoided. I knew the day would come when I would address it, and that day has arrived.  I usually provide many photos for articles. This has few, all the face of barbarism. We need to think, gentle readers, well and kindly, about this one.  This is why I write about this now, as Brietbart.com reports:

Virginia Democrat Delegate Kathy Tran proposed a measure last week that would not only allow abortion throughout all nine months of pregnancy in the state, but would also permit a woman to decide whether she wants to ‘abort’ her baby as she is dilating and about to give birth.

The bill is proposed as New York Democrat Gov. Andrew Cuomo has just signed into law the Reproductive Health Act, which eliminates recognition of ‘personhood’ in the unborn and defines a ‘person’ as a ‘human being who has been born and is alive.’ That law has been referred to as permitting ‘infanticide’ by many pro-life groups.

This, gentle readers, is yet another abandonment of compromise, of the willingness of the left to live, in relative peace, with normal Americans.  It is a very much in-your-face sign that things have changed.  And it is, above all, an indication of their nihilistic intentions.

The Daily Wire reported on Tran’s legislation and provided this exchange between Tran and Virginia Republican Delegate Todd Gilbert:

Gilbert: So how late in the third trimester would you be able to do that?

Tran: It’s very unfortunate that our physician witnesses were not able to attend today.

Gilbert: No, I’m talking about your bill. How late in the third trimester could a physician perform an abortion if he indicated it would impair the mental health of the woman?

Gilbert: Okay. But to the end of the third trimester?

Tran: Yep. I don’t think we have a limit in the bill.

Tran: Mr. Chairman, that would be a decision that the doctor, the physician, and the woman would make at that point.

Gilbert: I understand that. I’m asking if your bill allows that.

Tran: My bill would allow that, yes.

Regardless of one’s moral philosophy, of one’s view of the place of reason and law in our society, this is conduct—in legal and moral parlance–that shocks the conscience. The bill, like others more or less like it, perhaps encouraged by New York’s example, are being introduced in multiple other Democrat-ruled states.  As written, the Virginia law would apparently allow abortion even as a child is passing through the birth canal, unquestionably alive, seconds from drawing its first breath.

According to the Virginia Gazette, Democrat Gov. Ralph Northam, Attorney General Mark Herring, and a number of Democrats in the General Assembly are backing the legislation – which equates ending the life of an unborn baby with providing women health care.

‘I’m going all the way to the Supreme Court if I have to in order to protect Virginians’ health care,’ Herring said.

‘For women seeking reproductive care, the additional costs and obstacles imposed by existing regulation could potentially include unpaid time off from work, hospital fees and other emotional distress,’ Tran said. ‘These restrictions harm women and have disproportionate effects on low-income women and women of color in Virginia.

VA governor Ralph Northam, a pediatric neurologist, is in deep trouble over these comments: 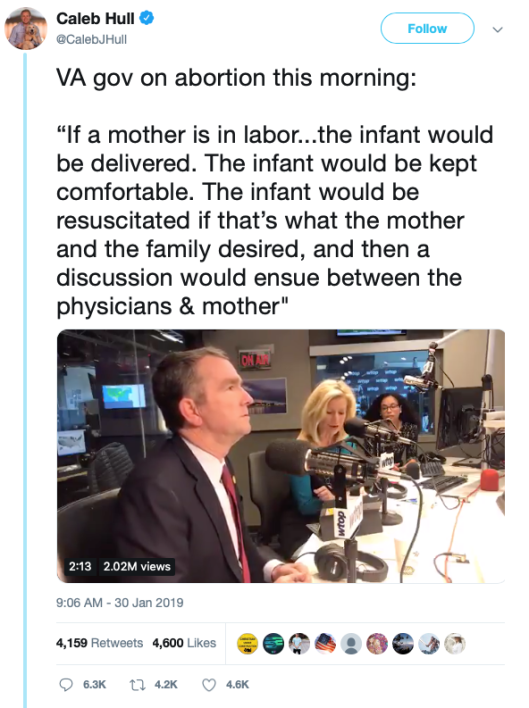 This is morally repugnant,’ Sen. Ben Sasse, R-Neb., said in a statement to National Review. ‘In just a few years pro-abortion zealots went from ‘safe, legal, and rare’ to ‘keep the newborns comfortable while the doctor debates infanticide.’ I don’t care what party you’re from — if you can’t say that it’s wrong to leave babies to die after birth, get the hell out of public office.

To which Northam replied:

It must be noted that the abortion bill failed in the VA legislature in the aftermath of the exposure of Tran and Northam’s statements, but it has failed only for now. Northam can call those that took his clearly implied meaning for what it is “shameful and disgusting,” and perhaps he only misspoke, but what are we to think when a pediatrician speaks of delivering a baby, perhaps with birth defects or other serious medical conditions, and making it “comfortable” while the physician and mother engage in “discussion” about killing it?  This is not a case of someone upset because their words and intentions were taken out of context.  Northam is upset because people took them in context.  The hypothetical child is born, unquestionably alive.  What is there to discuss?  Shall some of those drawing breath be declared outside the protections of the law?

In socialist worker’s paradises, everyone disdained by the state is outside the law.

But abortion is murder! Were this oft-shouted sentiment codified, the entirely foreseeable consequences would be more than most honest Americans could or would bear.  However, what Rep. Tran, and what Governor Northam appear to willingly support, would be murder under any just legal code.

None of this should be surprising.  Socialists/communists, by definition, character, and practice care nothing for the lives of individuals.  In their philosophy, there is no individual sovereignty, there are no individual rights, only privileges extended by the state as long as it pleases the state.  The worth of any individual resides solely in their current utility to the state.  The elderly and infirm, the developmentally disabled, the inconvenient child in the womb are all impediments to the people’s glorious revolution, and will be disposed of in the approved manner of such revolutions.

Our new leftist masters to be, heady with new-found political power, have taken off their masks.  They no longer try to hide their designs.  Sarah Palin was right all along: all socialist systems employ death panels.  Socialist systems are inherently death machines.  There is no such thing as free, equal quality health care; it is always rationed to those most useful to the state.  There are entire classes of people of no utility to the state, and the state will not allow them to become a drag on the inevitable triumph of socialist progress.

We now know, beyond any doubt, the kind of socialist state they would construct if they could.  They’re proud of it, and their brilliance in proposing it.  They, and they alone, in all of history, are sufficiently morally and intellectually superior to do socialism right—to make it shine with it’s destined glory–where all before them have failed.  And most interesting is that they are not disavowing the traditional methods of socialism—torture, rape, starvation, mass murder—they only imply they’re so super-human as to avoid all of that, because the people will be supremely grateful for all the free stuff, and all the workers will be happy.

The unquestionably alive children they would gleefully slaughter in the name of “women[‘s] health care,” and the glorious socialist revolution, could not be reached for comment.

Please gentle readers, read nothing more into my comments than is presented here.  This is a vexing issue.  I confine my commentary to this narrow, but disturbing slice of it, and urge you, as always, to add your thoughts.