Boulder, Colorado is a town well known for its leftist, “hippy” culture.  Long before marijuana was, for all practical purposes, legalized in Colorado, Boulder, and other Colorado officers, took a more or less “live and let live” approach to pot use.  As long as people didn’t smoke or deal the stuff in front of officers, they generally didn’t go out of their way to make arrests.

One might therefore think gun control laws would find a happy home in Boulder and similar places, but that does not appear to be the case, and that may be less surprising than some might think.  The Washington Times explains:

Only 342 ‘assault weapons,’ or semiautomatic rifles, were certified by Boulder police before the Dec. 31 deadline, meaning there could be thousands of residents in the scenic university town of 107,000 in violation of the sweeping gun-control ordinance.

The ordinance–-available here–is the usual mish mash of false leftist assumptions and grasping attempts to rule individual lives.  Some excerpts

*There has been a significant increase in mass shootings over the last two decades. Mass shootings occur most often at in public places and at schools and involve assault weapons.

*Boulder is home to the main campus of the University of Colorado, with an enrollment of 33,246 students and the campus of Naropa University, with 932 students enrolled. In addition, Boulder is home to Boulder Valley School District elementary, middle and high schools, with 14,357 students enrolled. In addition, the city is home to private schools with approximately 1,500 students. Boulder’s estimated population is 108,707. Boulder has one of the highest ratios of students per capita in the country. Students are disproportionately victims of mass shootings. Thus, the presence of a large number of students in the city of Boulder creates a higher than normal level of risk for the community.

Actually, mass shootings have not been increasing, nor are “assault weapons” the most commonly used firearm.  The Crime Prevention Research Center has a recent article that helps to put things in realistic perspective.  In addition, in 2014, 54% of American counties had not a single murder from any cause.  The darkest red represents counties with the highest number of murders, decreasing shades of red less, etc.

This map illustrating that reality, indicates that Jefferson County–Denver–had a relatively high rate of murders, but Boulder county–immediately north of Jefferson County, had relatively few.  One could reasonably argue that the drug trade between Denver and Boulder–they’re in close proximity–is partially responsible for murders in Boulder County.

There is no reason to believe a high concentration of students increases the risk of a mass shooting, nor is there any credible research to that effect. Were this so, how does one explain the attack in Santa Fe, TX, a small town with few students?  Oh, but the killer used an assault weapon!  He used a Remington 870 shotgun, one of the most common pump action shotguns in existence, and a .38 caliber revolver.

But the favorite choice of school shooters is assault weapons!  False.

The school attack with the highest casualty toll remains the 2007 Virginia Tech attack with 33 killed and 25 wounded.  The weapons employed were two common handguns, one in .22LR caliber.

Consider too the reality that while gun ownership has reached previously unimaginable highs, the violent crime rate has been dramatically declining for more than two decades.  A visit to this classic Bill Whittle video  puts the lie to leftist claims of a uniquely violent America.  Back to Boulder:

I would say the majority of people I’ve talked to just aren’t complying because most people see this as a registry,’ said Lesley Hollywood, executive director of the Colorado Second Amendment group Rally for Our Rights. ‘Boulder actually has a very strong firearms community.’

The ordinance, approved by the city council unanimously, banned the possession and sale of ‘assault weapons,’ defined as semiautomatic rifles with a pistol grip, folding stock, or ability to accept a detachable magazine. Semiautomatic pistols and shotguns are also included.

Boulder has banned–or partially banned–all or portions of three distinct classes of firearms encompassing the most common and popular weapons in America.  Take the link and read the law.  It is mostly incoherent, and demonstrates the usual leftist lack of knowledge of firearm technology.  It does include a favorite leftist ban: magazines of greater than 10 round capacity.

Current owners were given until the end of the year to choose one of two options: Get rid of their semiautomatics by moving them out of town, disabling them, or turning them over to police — or apply for a certificate with the Boulder Police Department, a process that includes a firearm inspection, background check and $20 fee.

Judging by the numbers, however, most Boulder firearms owners have chosen to do none of the above, albeit quietly.

‘The firearms community in Boulder — they may be Democrats but they love their firearms,’ said Ms. Hollywood, herself a former Boulder resident.

One longtime Boulderite who has openly refused to comply is Jon Caldara, president of the free-market Independence Institute,…

‘The question was, do I do this publicly or do it privately, and I’ve chosen to do it publicly because somebody has to.

‘In this town that spouts tolerance for alternative lifestyles, that actually puts posters all over its buildings and schools about it, when it comes to a lifestyle they don’t like, there is no tolerance,’ Mr. Caldara said. ‘So for me, this all works around the word tolerance. And tolerance means tolerating things you dislike, that you find scary.’

How many others are engaged in noncompliance? ‘Without a doubt, there are more than 342,’ he said. ‘I think potentially there are thousands.

Caldera is almost certainly guessing on the low side.  He is, however right, about the intolerance of the Left for anyone and anything in opposition to leftist orthodoxy.  Tolerance for me but not for thee.

The city council, which has been hit with state and federal lawsuits challenging the ban, took action in response to the tragic Feb. 14 shooting at Marjory Stoneman Douglas High School in Parkland, Florida, which left 17 dead.

‘I’m proud that we’ve taken a stand and become part of the growing movement towards common sense gun control in our country,’ said council member Aaron Brockett on Facebook.

City Attorney Tom Carr has acknowledged that enforcing the ordinance will be a challenge, telling the Boulder Daily Camera that ‘there’s no circumstance where we go door-to-door and ask people if they’ve violated the law.

“Common sense gun control” always involves bans, and direct violations of the Second Amendment.  Confiscation is always very much on the minds of leftists.  They know they can’t impose their other “common sense” policies with an armed populace.  It is only a very vocal and litigious citizenry that prevents confiscation, as I noted in my 2014 series on Connecticut’s “assault weapon” ban.   The initial article in that series, the most popular in SMM history, rapidly helped convince Connecticut’s gun grabbing politicians to drop their confiscation plans.

Boulder spokeswoman Shannon Aulabaugh declined to comment on his noncompliance, citing his role as a plaintiff in the federal lawsuit filed by the Mountain States Legal Foundation.

Other Boulderites are making their objections known in different ways. A Boulder business owner provided Ms. Hollywood’s group with T-shirts and yellow car stickers with the message, ‘We Will Not Comply,’ which have popped up on vehicles, guitar cases, even rifle bags.

A rally in April before the council’s vote drew more than 500 supporters to downtown Boulder.

That’s in Boulder, Colorado, often called, and not jokingly, “The People’s Republic of Boulder.”  Boulder will eventually lose this legal battle, and at great cost to taxpayers.  While the 2008 Heller decision was narrowly focused on a specific set of circumstances, it did establish that the right to keep and bear arms is a fundamental, unalienable right. It also suggested strongly that the most common and usual arms may not be subject to blanket bans.  Shotguns, semiautomatic handguns and rifles are solidly in that category.

Surely the Boulder City Council’s attorneys knew this?  Surely they told them how expensive this losing battle would be and it’s almost certain outcome?  Tom Carr is right: this is going to be a very difficult law indeed to defend. 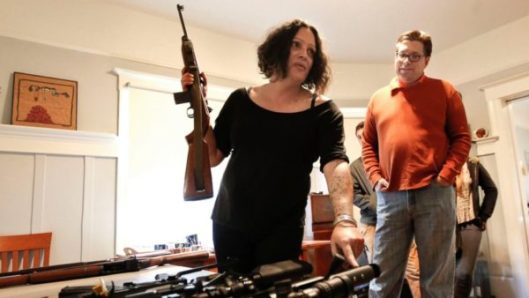 This situation does hint at one encouraging trend, a trend that began during the Obama Administration: leftists becoming first-time gun owners.  Despite their political leanings, many understood–and understand–the government not only cannot protect them, it will not protect them, while simultaneously working to disarm them so they can’t protect themselves.

Consider the happy turn of events in the case of Jayme Closs, the 13- year old girl kidnapped following the murder of her parents.  Held for 88 days, Closs was able to escape.  Fox News reports:

When Jayme Closs showed up at their doorstep, the Kasinskas family sprung into action, taking two steps before most anything else. They called 911. And they grabbed their firearms, in case the kidnapped teen’s abductor was in pursuit.

Kristin Kasiskas told Fox News that she and her husband immediately recognized the 13-year-old Wisconsin girl whose October kidnapping captivated the nation when a neighbor, Jeanne Nutter, frantically knocked on their door at 4 p.m. on Thursday.

‘When our neighbor Jeanne came in with Jayme, she said: ‘Get a gun. We don’t know if he’s after us,’ Kasinskas said. ‘So we were armed and ready in case this person showed up.

And so they should have been when facing a serial killer and kidnapper.  And what kind of weapons would be of the greatest use in such a situation?  The very weapons–and their magazines–Boulder has partially or completely banned.

Those of us involved in defending the Second Amendment know not every Democrat is a gun grabber, and more and more of them now own and enjoy guns. With a majority in the US House, Democrats are once again actively spinning gun ban schemes.  The response of Boulder’s citizens provides at least some hope criminalizing law-abiding, gun-owning Americans might be more difficult than many on the Left imagine.