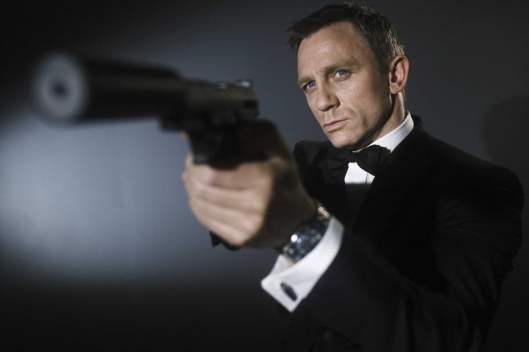 I’m sure you’ve noticed, gentle readers, some people have difficulty telling fantasy from reality, and some just take themselves far too seriously, as Fox News reports:

Martini-loving spy James Bond has a severe drinking problem and should seek help, researchers argue in a new paper titled ‘License to Swill.’

‘There is strong and consistent evidence that James Bond has a chronic alcohol consumption problem at the ‘severe’ end of the spectrum,’ wrote the researchers from the University of Otago in New Zealand in the paper published Monday in the Medical Journal of Australia.

During his six decades on screen, a drink touched the secret agent’s lips 109 times at an average of 4.5 times per movie, the researchers found.

The dashing spook’s biggest binge was in 2008’s ‘Quantum of Solace,’ where he downed six of his signature Vesper Martinis.

Uh, these “researchers” are aware, hopefully, that the settings of these movies don’t take place within a 24 hour period?

When he drinks, Bond engages in risky behavior like having sex with enemies — ‘sometimes with guns or knives in the bed,’ researchers wrote in the study.

He’s also prone to brawls, car chases, high-stakes gambling and operating complex machinery — like the nuclear technology in 1962’s ‘Dr. No, they found.

Now I’m concerned.  Aren’t they aware that the Bond films are, well, films, and all that ‘nuclear technology,’ ‘complex machinery’ and the rest are props, special effects and stunts?

The authors suggested that Bond’s workplace, MI6, should become ‘a responsible employer’ and offer the secret agent support services and ‘change its own workplace drinking culture.

Um, these people do know James Bond is fictional, right?  He’s played by actors who don’t actually drink on set, and all the sex, fights and other stunts are also done by actors and stunt persons, none of whom get hurt?  In fact, no one even gets to consummate the simulated sex after having many simulated drinks.

Apparently, university researchers in New Zealand don’t have much serious work to do.  They simulate it instead.

Aren’t you glad we can trust the media, because unlike bloggers in their pajamas, the media have layers and layers of fact checkers and editors:

A newspaper has been forced to apologize after an otherwise glowing interview with Hollywood star Julia Roberts was ruined by perhaps the world’s most unfortunate typo.

The Post-Journal of Jamestown, New York, ran a weekend feature on Roberts, 51, looking at her current career renaissance more than 30 years after her first film role.

Their headline? ‘Julia Roberts Finds Life And Her Holes Get Better With Age.’

I’m sure all share the hope that our, ahem, “holes” will get better with age.

Ms. Ocasio-Cortez has not yet been sworn in as a Representative.  What so qualifies her for the presidency that the Constitution should be abandoned to make it so?  Her smile? Her figure?  Her trademark deer-in-the-headlights stare?  Say what you will about Donald Trump, he was an extraordinarily accomplished man before taking office.  Say what you will about Barack Obama, he voted “present” in the Illinois legislature, and he…oh.  Powerline reports:

Ms. Ocasio-Cortez, via Twitter, rejected the suggestion that she should get herself elected president in defiance of the Constitution and “dare the Supreme Court to stop her.” That is to her credit, I guess, in today’s crazed environment.

This is a small thing, obviously. I don’t suppose any serious person pays attention to Vox. But we are, in fact, living in dangerous times. Liberals do not see themselves as bound by any constraints of law or, even more fundamentally, of good faith. Barack Obama, for example, didn’t declare himself president for life or run for president in violation of the Constitution. But he did direct the issuance of work permits to illegal immigrants in blatant violation of federal law, and dared the federal courts to stop him. Is that very different from what Vox urged a not-yet-freshman Congresswoman to do?

If you disagree with a liberal, your First Amendment rights are revoked. If Democrats think they can demagogue crime, they are happy to make your Second Amendment rights disappear. And if you run against a Democrat, your Fourth Amendment rights won’t prevent unmasking and obtaining of surveillance warrants through misleading, or outright false, applications. So why should we be surprised that a Democratic Party outlet like Vox would think there is nothing extraordinary about simply ignoring the Constitution?

Yeah.  What’s wrong with that?  What could possibly go wrong?

Why do leftists have such an obsession with shit?  The College Fix reports: 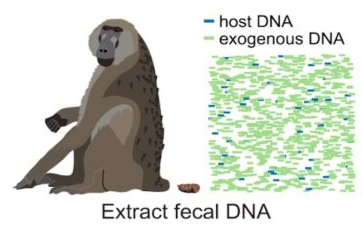 An image in a scientific journal features a drawing of President Donald Trump’s face superimposed on monkey feces.

The study, titled ‘Methylation-based enrichment facilitates low-cost, noninvasive genomic scale sequencing of populations from feces’ and published on Jan. 31 in Scientific Reports, details ‘an inexpensive capture method for enriching host DNA from noninvasive fecal samples.’ The study is authored by Kenneth Chiou and Christina Bergey, currently scholars at the University of Washington and Penn State, respectively.

In one set of illustrations in the article, a monkey is shown sitting next to a pile of feces. Zoomed-in detail of that graphic shows that President Donald Trump’s face has been stenciled onto the monkey poop. 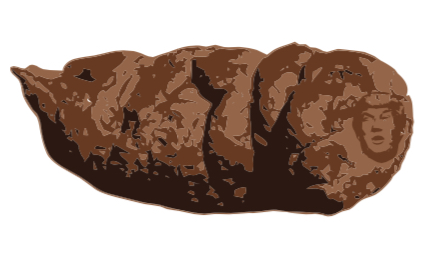 It’s science. You don’t want to be a science denier, do you?

Naw, I’m sure she did this, and kept it private, out of the goodness of her boundless heart.  PJ Media reports: 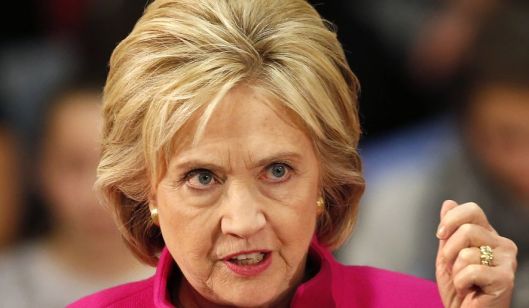 Third-grader Martha Kennedy Morales received an unexpected piece of mail last week. After losing a class election for president by just one vote, Martha opened her mailbox to find a letter from none other than former secretary of State Hillary Clinton. ‘While I know you may have been disappointed that you did not win President’ Mrs. Clinton wrote, ‘I am so proud of you for deciding to run in the first place.’ Clinton spokesman Nick Merrill toldCNN that the letter is, in fact, from Mrs. Clinton, who saw a Facebook post that Martha’s father shared about the class election and decided to write the letter.

While there’s no doubt that receiving a letter from a public figure out of the blue is exciting, one has to wonder why the letter was sent in the first place. What were Mrs. Clinton’s motives? Upon reading the letter in its entirety, it seems fairly clear that Mrs. Clinton was trying to make the situation somehow about herand, more specifically, about gender bias. ‘As I know too well,’ Mrs. Clinton wrote in the letter, ‘it’s not easy when you stand up and put yourself in contention for a role that’s only been sought by boys.’ It’s true that Martha lost to a boy, but there is no indication that the boy won because of his maleness. In fact, Martha lost by only one vote, which — given the fact that her class probably had fewer than 30 students in it — is basically a tie.

Isn’t that the fondest hope of every little girl running for a school office?  To get a condolence letter from a washed up politician–who should be in jail–desperate for any publicity that might help her remain even marginally relevant?  But hey, why not?  Hillary has plenty of time off from the Clinton’s magical mystery tour.

I know we pay philosophers to think about things, but shouldn’t the end result have some practical value?  The Daily Wire reports:

On Monday, The New York Timesprinted an op-ed from Clemson philosophy professor Todd May. Its cheery, holiday-themed title: ‘Would Human Extinction Be a Tragedy?’ Yes, he answers – but only because we’ve done it to ourselves. In terms of the loss to the world, probably not.

May begins by acknowledging that the experience of ‘humans coming to an end would be a bad thing’ – or at least it would cause some pain. He is agnostic on the question of whether ‘human begins as a species deserve to die out.’ The question May wonders about is whether it would be a ‘tragedy if the planet no longer contained human beings.’ His conclusion: ‘it would be a tragedy and that it might be a good thing.

Apparently microaggressions and being politically incorrect now extend to baked goods, as The Week.com reports:

Fox News’ Tucker Carlson is fighting back against ‘spiritual neutering,’ one holiday cookie at a time.

On Tuesday’sTucker Carlson Tonight, contributor Tammy Bruce brought up some very disturbing news: A gingerbread man is now sometimes referred to as a ‘gingerbread person.’ It’s just the latest development in “a series of living your entire life being bullied into what you can and cannot say,’ Bruce says. And it shows that ‘just the smallest thing… can be the tipping point’ in policing speech, she said about the name of a cookie on national TV.

Yeah, but what do the organic genderless gingerbread figures have to say about that?  Aren’t their legitimate expressions of angst over their gender fluidity being suppressed? What about the bakery patriarchy? Who decides who gets sparkles and who doesn’t?  Join the gingerbread resistance!

This one is a bit of an oldie, from December of 2018, but it serves to remind us of the quality of thinker that inhabits the US Congress: The Telegraph reports:

The 55 year-old Democratic member of the US House of Representatives [Hank Johnson (D. Ga)] claimed he was ‘obviously’ joking when he made the remarks during evidence with a senior Naval officer about the US Military’s build-up on the American territory.

While questioning Admiral Robert Willard, the head of the US Pacific fleet, the two-term Congressman from Georgia expressed concerns about the plans to post up to 5000 extra marines, and their families, to the island.

‘My fear is that the whole island will become so overly populated that it will tip over and capsize,’ the former judge told the House Armed Services Committee hearing.

At the same time he leant to his left and added hand motions suggesting a large vessel tipping into the sea.

After a pregnant pause, Admiral Willard, replied that officials did not expect such a problem.

‘We don’t anticipate that,’ he said in a deadpan response, while trying hard not to laugh.

I saw the video.  If Johnson was kidding, it was an Academy Award level performance.  I mean, the Academy Awards when they were given out for good acting, sort of like when winning the Nobel Peace Prize actually required the recipient do something for, you know, peace.