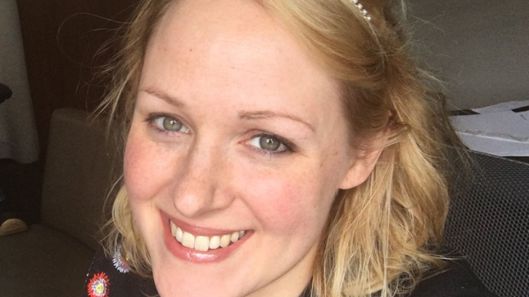 Meet Ariel Dumas, an attractive young woman, pleasant appearing, perhaps likeable.  Unfortunately, the truism that one cannot judge a book by its cover is embodied in Ms. Dumas, who, post-Kavanaugh, demonstrated a heart of stone, and the moral sensibilities of the average rattlesnake:

Ms. Dumas is a writer for the CBS “Late Show With Stephen Colbert,” so this failed attempt at wit should not be a surprise.  Failure to be funny while working for Colbert is apparently not a disqualifier, quite the opposite, as this tweet reveals (note the relative time stamps): 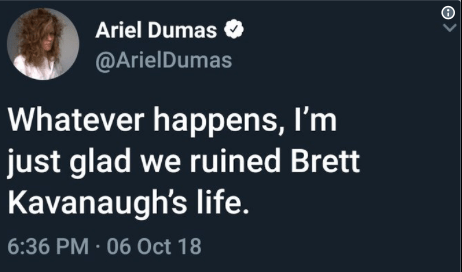 Oh. This tweet was, as usual, quickly taken down, but many managed to screenshot it.  But perhaps one shouldn’t judge Ms. Dumas too harshly?

And who are “we”?  One might reasonably think them to be the self-imagined elite, intellectually and morally superior, chosen by the universe to bring destruction on anyone they are encouraged to hate.

The trauma caused the oh-so-hip and obviously edgy Ms. Dumas by the confirmation of one of the most qualified and experienced judges in history to the Supreme Court is, of course, all but unimaginable by God and gun clinging deplorables.  The trauma experienced by the Kavanaugh family, and the damage done to the Senate and Supreme Court, are easily imaginable.

Notice Ms. Dumas sees things in terms of “me.”  Oh, the unfathomable depths of her “frustration, anger and sadness”!  Who have hearts so black that they do not weep for her and her “we”?  She regrets not her gleeful delight in the wanton and unjustified destruction of the reputation of an innocent man, and any hope of future tranquility in the lives of his family, no.  She regrets her sarcasm was not sharper and more representative of her superior state of being.

If she truly possessed a subatomic particle of morality, humanity, kindness or altruism, she would be admitting, without qualification that she was wrong, and apologizing not only to the Kavanaughs, but to the Almighty. This would, however, require her to recognize the cruelty, viciousness and ugliness of the ideology she embraces. The self-imagined elite, for all their exalted qualities, are incapable of that sort of introspection.  This is far from all. Fox News reports

Dumas previously had quoted news analysis pieces criticizing Kavanaugh for saying the accusations had ‘destroyed’ him, including a piece that observed, ‘the bar for a man’s ruin is, apparently, quite low.’

Yes.  Yes it does.  But perhaps there is yet hope for comity in the Senate, and for reconciliation among Americans generally?  Fox News partially answers those questions:

Hogue is a Google executive, so his depraved hatred, and usurpation of the role of God should hardly be surprising.  Like Dumas, he took down his tweet, and replaced it with this:

This is what passes for an apology on the Left.  He should have spouted his venom more eloquently and with a bit less obviously flinging spittle.  And who, pray tell, are “we,” and how can they do better?  Succeed in more efficiently destroying innocent men and packing the Supreme Court with people determined to ignore the Constitution and the law?

But surely a former US Attorney General, a man sworn to uphold the Constitution and the rule of law will have some useful guidance?

Oh. Of course, Holder was arguably the most corrupt AG in American history, so any Supreme Court that does adhere to its constitutionally mandated role must be illegitimate.  After all, Kavanaugh was confirmed by the usual order of the Senate and entirely within the law.  How dare he?! And as to Judge Garland, no Senate Republicans viciously attacked him or his family.  No Republicans protested at his home or threatened him or his family.  The Senate merely followed long-standing tradition and regular order.  The bastards.

What’s that you say?  These are cherry picked examples?  This isn’t the real Left?  Powerline would disagree: 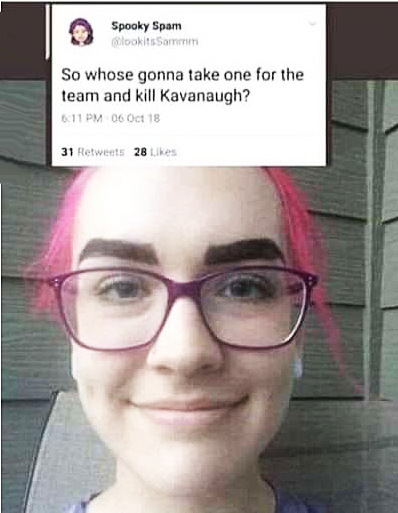 The Democratic Party is stark, raving mad. That is the lesson of the last two years. The Minneapolis Star Tribune headlines: ‘Rosemount educator on leave after tweeting ‘kill Kavanaugh?’ Well, yes, she is. Rosemount, for what it’s worth, is one town over from where I live. The Strib’s story is characteristically discreet:

A Rosemount special education teacher has been placed on paid administrative leave after posting a tweet Saturday that appeared to call for the killing of new U.S. Supreme Court Justice Brett Kavanaugh.

The teacher [Samantha Ness], listed as an instructor at the Intermediate School District 917’s Alliance Education Center, has since deleted her Twitter account but her tweet was captured and shared by scores of users who said they reported it to the FBI and U.S. Secret Service.

If one is going to call for the murder of a Supreme Court justice, it’s generally considered–particularly for a teacher–poor form to misspell the encouragement to kill.  Then again, one might consider any invocation to murder by a teacher of some small concern, which appears to be true even in Minnesota, as Fox News Reports:

A Minnesota special education teacher has resigned after she posted a message on Twitter exhorting her followers to kill Supreme Court Justice Brett Kavanaugh.

The teacher, identified by multiple social media users and local outlets as Samantha Ness, had been placed on paid administrative leave after the message was widely shared online.

I have only one question: teachers get to do hair and eyebrows like that in Minnesota?  One can only pray her message did not lodge in the diseased brain of a Leftist willing and eager to carry out her wishes.  Were I Judge Kavanaugh and Mrs. Kavanaugh, I’d be obtaining excellent handguns, excellent and continual training, and carrying them everywhere. I’d even carry a speargun in the shower and install claymores surrounding my home and car.  Lawn landmines might be a nice touch too.

You will, I’m sure gentle readers, be delighted to hear Bill and Hillary Clinton are going on the road, lecturing about their wonderful reminiscences of their days in power, and explaining how America might yet be saved.  They’re charging up to $700 a ticket.  Who would not second mortgage their home for such an opportunity?  Among the things Hillary has to say are:

Rep. Steve Scalise, the survivor of that kind of patriotic sentiment, and gentle encouragement, was not amused: 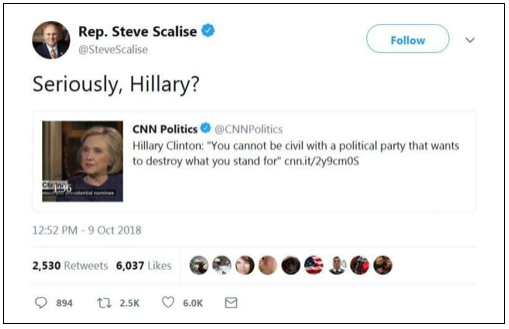 And of course, leftists had to bring up guns:

To answer Tigah, yes, they have indeed lost their minds.  This was not all Clinton had to say on the subject:

Speaking to CNN’s Christiane Amanpour, the 2016 Democratic presidential nominee said, ‘That’s why I believe, if we are fortunate enough to win back the House and/or the Senate, that’s when civility can start again. But until then, the only thing Republicans seem to recognize and respect is strength.

Why of course the Democrats will demonstrate their good will, as they impeach President Trump, Justice Kavanaugh, and anyone else they possibly can in a display of dignity, decorum and civility. Let us continue to explore the intentions of the left with a visit to Portland, Oregon, courtesy of Legal Insurrection:

Antifa protesters blocked traffic and almost started a riot during a Saturday march and vigil for Patrick Kimmons, a black Portland man shot by police on September 30 after he allegedly shot two people and approached officers holding a gun.

‘Protesters Started a Riot in Downtown Portland!’ tweeted videographer Brandon Farley, who, according to his Twitter feed, records ‘disruptive events in downtown Portland, Oregon.’ The disturbing video shows protesters running down the street, and a group chasing an older white-haired man to his car…

‘Just go that way,’ a female protester told a driver who had rolled down his window to talk. When he purportedly asked why, she responded, ‘Because I told you to.’

‘Yeah brother, yeah you little white little f*er,’ a man, who appeared to be white himself, yelled while approaching the vehicle. ‘The First Amendment. Get the f* down the road.

Portland Police stood by, watched and did nothing.  Orders from the leftist Mayor, no doubt in the spirit of civility.

The Left has learned nothing from the Kavanaugh debacle.  They are incapable of feeling shame or regret, and are already asserting they were not nearly vicious and cruel enough.  We know what they’ll do it they again gain political power.  They’re telling us, for the first time, without concealment.

We conclude with one more indication of their intentions: 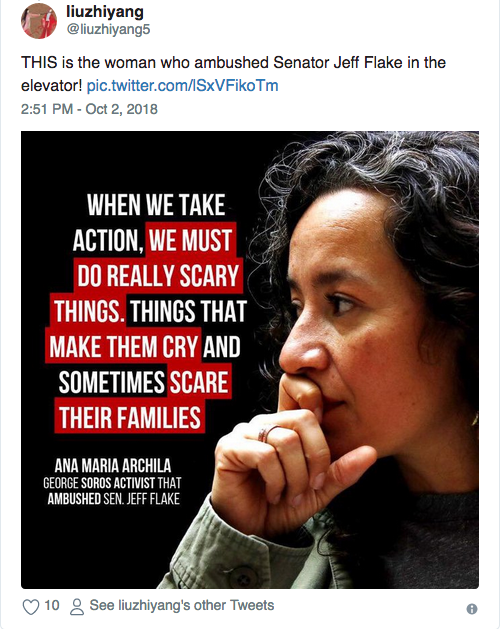 This Leftist thug makes a six-figure salary, and made a bonus last year of more than $20,000 dollars. Nice work–laboring to destroy our democratic institutions and seize ultimate power–if you can get it.

This, gentle readers, is the nature of the Democrat party.  These are the people that would rule us, exposed as the brutal, heartless thugs without restraint they are by their own words and actions.  They no longer feel the need to observe any boundaries, and their hatred for normal Americans is unquenchable and quite insane.

The America they seek to create has nothing to do with the Constitution, human rights, or the rule of law.

11 thoughts on “Kavanaugh: In The Aftermath, The Left Unleashed”