Of late, the “Stand Your Ground” laws of the several states have been badly maligned and misrepresented. Circa August of 2018, 36 states have a SYG law–Wyoming was the most recent in March of 2018–and most also provide immunity from lawsuits in cases of lawful self-defense–a very good thing. Why should victims of criminal assault be sued for defending their lives?

As regular readers know, a five-part crockumentary is now playing.  It romanticizes the death of holy social justice martyr Trayvon Martin.  I’ve reviewed the first two episodes here and here.  Both episodes are rife with lies and dripping with emotion rather than fact, but the most egregious continuing lie is the idea that Florida’s SYG law somehow contributed to the death of Martin.  “SYG allows white men to murder black boys!”  “SYG kept George Zimmerman from being arrested!” “SYG makes it easy to murder and the NRA is responsible!”  None of these, and other slanders is remotely true.

Even the most recent article on the Justine Damond case brought this comment from a regular reader:

What is particularly interesting is that SYG was inapplicable to the Zimmerman case.  It had no bearing on the case at all, and was never raised at trial by the prosecution or defense.  The jury’s acquittal of Zimmerman was entirely uninformed by SYG.  SYG is also entirely inapplicable to the Justine Damond case, and will not be raised in the trial of Mohamed Noor.

UPDATE, 03-22-20 1150 CST:  As I noted in the original article, Stand Your Ground played no part in the trial of Mohamed Noor, who was convicted and sentenced to prison in the death of Justine Damond.

But why not?  We hear SYG this and SYG that on the media.  Don’t they know about such things?  With almost no exceptions, they are as clueless about this subject as they are about firearms and self-defense law.  If you are interested in this, gentle readers, by all means read Andrew Branca, whose definitive book The Law of Self Defense, is must reading.

Since it had no bearing whatever on the Zimmerman case, but much of the country thinks it did, let us review the applicable Florida statute:

776.013 Home protection; use or threatened use of deadly force; presumption of fear of death or great bodily harm.—

(1) A person who is in a dwelling or residence in which the person has a right to be has no duty to retreat and has the right to stand his or her ground and use or threaten to use:

(a) Nondeadly force against another when and to the extent that the person reasonably believes that such conduct is necessary to defend himself or herself or another against the other’s imminent use of unlawful force; or

(b) Deadly force if he or she reasonably believes that using or threatening to use such force is necessary to prevent imminent death or great bodily harm to himself or herself or another or to prevent the imminent commission of a forcible felony.

(a) The person against whom the defensive force was used or threatened was in the process of unlawfully and forcefully entering, or had unlawfully and forcibly entered, a dwelling, residence, or occupied vehicle, or if that person had removed or was attempting to remove another against that person’s will from the dwelling, residence, or occupied vehicle; and

(4) A person who unlawfully and by force enters or attempts to enter a person’s dwelling, residence, or occupied vehicle is presumed to be doing so with the intent to commit an unlawful act involving force or violence.

I have omitted less relevant portions of the law. If you are concerned I may be engaging in the same kind of concealment as the media and social justice warriors (I know: one-in-the-same), take the link and read the rest–there isn’t much, and it’s mostly definitions–for yourself.

The point of the law is to remove the duty to retreat, which is still the law in most of the 14 remaining states.  In those states, if one is attacked and threatened with serious bodily harm or death, even in their own home, they have a legal duty to retreat, unless such running away would be reasonably impossible.  In the past, this has actually resulted in a legal duty to abandon one’s home and family to violent felons when under threat, and it is the obligation of the innocent to prove they could not possibly retreat before using force. In rational states, as long as one is lawfully present when attacked, they have no duty to retreat, and may “stand their ground” and defend themselves.

But that’s crazy!  The absence of SYG laws make it easy for violent felons to prey on the honest!  Right and right. If one has the natural, unalienable right of self-defense–the right to preserve one’s life–it makes no sense to give every advantage to those vicious and cruel enough to unlawfully take the lives of the innocent.  It makes no sense to make them run away, to turn their backs to those trying to kill them.  It also makes no sense to deprive them of the best and most common instruments necessary to preserve life and limb, or to prevent them from carrying those instruments wherever they may be, but many progressives and social justice cracktivists labor ceaselessly to do just that.

Let us examine the five essential elements that apply to the use of force in states without a SYG law:

1) Innocence: the defender must not be the initial or unlawful aggressor. People engaging in mutual combat can’t claim innocence. Because they’re actively trying to harm each other with no way to tell how far the conflict will go, they’re not engaging in self-defense.

Police officers generally have the presumption of innocence. It’s their job to go into harm’s way, and they act under “color of law.” They can’t avoid conflict like most citizens can, although these days, particularly where social justice outweighs the rule of law, they do all they can to do just that.

2) Imminence: one can’t use deadly force against a possible attack, or against an attack that might happen at some time in the future. The danger must be real, clearly about to occur–within mere seconds–or already occurring.

3) Proportionality: this speaks to the degree of danger of the attack. If the only thing in jeopardy is hurt feelings, even a weak slap to the face might not be proportional. A reasonable person–or a reasonable police officer–must believe they’re facing a threat of serious bodily harm or death.  This can be difficult indeed.  Will the next punch merely bruise, or shatter a skull?  Will the next kick merely knock the wind out of someone, or tear an artery?

5) Duty To Retreat: this is a state-imposed duty requiring anyone facing imminent danger—or actual attack—to do all they can to flee before using force in their defense.  It is often the burden of the accused to prove they fled, or did everything they reasonably could do to flee.  One might consider this an unnecessary, extra requirement of innocence.

Let’s apply this general information–there is, of course, more to the law–to the Trayvon Martin and Justine Damond cases to illustrate the point.

George Zimmerman immediately after the attack.

Trayvon Martin (the Trayvon Martin case archive is available here): thinking Martin, who was out in the rain on a cold night, appeared drugged (he was), and seeing him standing on the lawn of a home that had recently been burglarized and realizing he appeared to be casing the place, George Zimmerman called the police and remained on the line as Martin spotted him and sprinted off, disappearing between a long row of townhomes.  Told twice to keep the dispatcher informed about what Martin was doing, Zimmerman trotted after Martin, not to catch him, but to try to keep him in sight for the officers he was told were on their way.

Zimmerman quickly lost Martin and told the dispatcher he was turning around and would meet the responding officers at his parked truck.  Martin had more than enough time to escape and never be seen again, but hid and ambushed Zimmerman, breaking his nose and knocking him to the ground, where Martin straddled him, rained blows down on him in Mixed Martial Arts “ground and pound” style–according to a credible eyewitness–and repeatedly beat his head against the concrete sidewalk upon which he lay.

Zimmerman, screaming for help, was unable to deliver a single blow or defend himself, and when Martin told him he was going to kill him, had every reason to believe him.  He fired a single shot from his lawfully carried handgun, stopping the attack and killing Martin.

Analysis: in this case, SYG didn’t apply.  Zimmerman was pinned to the ground being beaten to death.  There was no possibility of retreat, nor would Zimmerman have been required to retreat, though he would have been wise to do so if he could.  That’s true for anyone.  Every other element was in Zimmerman’s favor.  This did not rely solely on Zimmerman’s word, but all of the physical and other evidence supported his account, as did the testimony of every credible witness. Because it was clear Zimmerman acted in lawful self-defense–the prosecution actually proved it(!)–the law required his acquittal.  The charges should never have been brought. 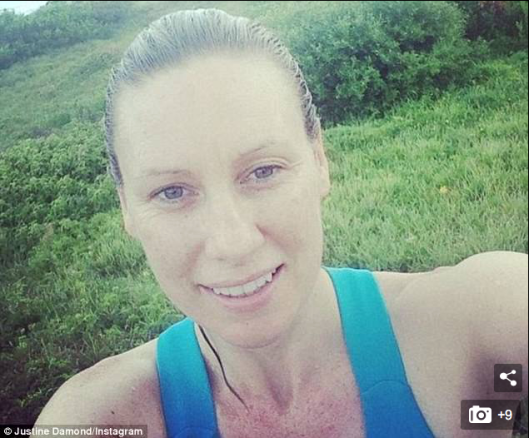 Justine Damond (the Damond case archive is available here): Officers Matthew Harrity–the driver–and Mohamed Noor were sent to a call–it was near midnight–of a woman screaming somewhere behind a home.  This is all they knew as they arrived at the alley behind the home in a good, low-crime neighborhood of Minneapolis.  Rather than handling the call the smart way by parking their car and walking the alley on foot so they could use the plentiful cover and concealment and see and hear what was going on, they merely turned off the lights of their patrol vehicle, turned on the spotlight, and rolled down the alley. Nearing the end, they turned on their lights and accelerated, intending to leave.  They paused momentarily to allow a bicyclist to pass, and Justine Damond, who had made the 911 call, appeared at Harrity’s open window.  Noor, in a panic, pushed his gun across Harrity’s body and shot Damond in the stomach, almost instantly killing her.

Analysis: Harrity and Noor were lawfully present.  They were doing their duty, though doing it incompetently.  Neither of them saw or heard Damond approaching. She likely thought they were just going to drive off and wanted to tell them what she knew.  Seeing, or merely  sensing movement, Noor killed her, having no idea who he was shooting or why.

Because Damond was the victim, SYG does not apply.  She had no reason to think her life was in danger as she approached the police car. No reasonable person would recognize a duty to retreat, and in any case, SYG would not apply to the police or Damond.  She had no time to retreat.

In this case, the ultimate issue will be whether any reasonable police officers, facing the same situation, would have blindly fired his weapon in the face of his partner at a target he could neither clearly see nor identify.

I cannot say it often enough: SYG laws do nothing more than remove the duty to retreat.  They establish no shield against prosecution, nor do they allow anyone to do anything the law forbids.  They have no racial component.  They protect only the innocent, and in a limited fashion.  The lawful use of force, SYG law or not, depends on the other four elements I’ve mentioned.