In October of 2017 I wrote Look What The Librarian Dragged In, which was the story of librarians sponsoring drag queen “storytime” programs. These events took place–and apparently continue to take place–at The Michelle Obama Neighborhood Library in–wait for it–Long Beach, California.  I’m shocked, shocked!

The Obama Library bills itself thus:

The new Michelle Obama Neighborhood Library, opening September 10, 2016, will be a state of the art 24,655 square-foot single story facility, and will include areas for children, teens and adults, as well as three public community meeting spaces.  The new library will have expanded resources and programs to serve the community of north Long Beach, including assistive and adaptive technologies for people with disabilities.

That sounds rather like the Barack Obama Presidential Library, which will have no annoying books or similar things–like documents relating to Obama’s presidency–cluttering the place.  Basketball courts, yes; books, no.  But back to drag queens and children: the drag Queen in question–Xochi Mochi–is depicted above, and be sure to note her/his/it’s (insert preferred pronoun here) goal:

I got to read to the children today and it was one of the best experience I’ve been given as a drag queen.  It’s so important to have representation and normalize all the letters in LGBTQIA+ in everyday lives.

Xochi Mochi was not reading Dr. Seuss or Adventures of Huckleberry Finn, no.  He/she/it was reading literature designed to “normalize” the LGBQWERTY+ practices and lifestyles he/she/it embraces, because nothing is more important than that pre-school children be exposed to gender confusion, deviant sex practices, and lifestyle choices characterized by acute mental illness.  One might simply observe it’s inappropriate to talk sex with kids who are so far from puberty they couldn’t see it with the Hubble Telescope.

One might be tempted to pass this off as just another bizarre Californian aberration, and ask: “how, pray tell, can I help them secede? Perhaps even cut the state off from the United States and tow it out into the Pacific–far, far out into the Pacific?”  But as with any contagion embraced by our self-imagined, diversely tolerant elite betters, it has spread, as The Daily Caller reports:

Teachers are praising ‘Drag Queen Story Hour,’ according to a clip released by videographer Sean Fitzgerald and the David Horowitz Freedom Center. The program ‘captures the imagination and play of the gender fluidity of childhood and gives kids glamorous, positive, and unabashedly queer role models. 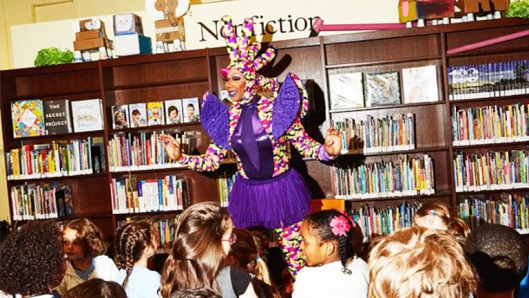 ‘Drag Queen Story Hour gave my first graders a fun and interactive platform to talk and think about social and emotional issues like acceptance, being yourself, and loving who you are,’ Hernandez said. ‘During our debrief … [students] were preaching the incredible lessons they had learned, like ‘it’s OK to be different,’ and ‘there’s no such thing as ‘boy’ and ‘girl’ things.’

Well of course not!  As all right thinking people know, there is no difference whatever between boys and girls. Just ask Heather Heying, a life-long progressive and former professor at one of the most leftist colleges in America who lost her career for being insufficiently woke.  She dared to suggest there are differences between men and women, among other heresies.  The horror.   A Brooklyn preschool teacher agreed:

If one is trying to indoctrinate children, it’s best to get them as early as possible, the better to keep them in political lockstep for life:

Drag Queen Story Hour markets itself to children between 3 and 8 years old. The program’s reading list includes books like “Jacob’s New Dress” by Sarah and Ian Hoffman and “Red: A Crayon’s Story”by Michael Hall. While the former book’s plot revolves around a boy convincing his parents to let him wear a dress to school, the latter chronicles the journey of a crayon ‘mistakenly labeled’ red to identify successfully as blue.

Amazon.com has this to say about Red: A Crayon’s Story:

Hmm, gentle readers. You don’t suppose there’s any political symbolism in that children’s book do you? Any agenda other than teaching literacy?

Fitzgerald cited articles noting a spike in children identifying as transgender within the past few years.

Fairfax County, Virginia has apparently abolished biological sex.  Progressives are forever claiming their political opponents are “anti-science.” I’m sure the removal of instruction regarding biological sex from their science curriculum is entirely science-based. But I would like to know how they were able to repeal nature.  That’s a pretty neat trick.  Perhaps they’re also able to change the laws of physics?  The possibilities boggle the mind.

Particularly amazing–and distressing–is the fact that some parents are very much for this kind of “instruction.”  Some, no doubt, think it proper to give their children all manner of choices about such things as their manner of dress, their budding sexuality, and even their gender–if they recognize the existence of such an outmoded concept, that is.  We shouldn’t impose such non-woke social constructs as gender on children.  We should allow them to choose their own gender, shouldn’t we?

However, unless one thinks three to eight year-olds capable of understanding human sexuality and psychology, unless one thinks them capable of making life-changing decisions that routinely destroy the sanity and lives of adults, it is not unreasonable to think exposure to this sort of material akin to emotional child abuse, at the least.

As a high school teacher, I must be very cautious about the slightest hint of sexuality in the literature and movies I use in my curriculum.  It is plainly unprofessional and unethical to expose my 15-18 year-old students to such things, and doing it is one of the fastest ways to end a teaching career, and rightfully so.  I have little enough instructional time as it is.  Wasting that trying to impose my own views of sexuality or politics on my kids is as wrong as wrong can be, and a betrayal of the public trust.

Educators must allow children to be children while gradually preparing them for the responsibilities of adulthood.  Drag queens, deviant adult sexuality, and political indoctrination–of any kind–have no place in that process.

There is an organization working to expose and stop unethical indoctrination in the public schools: Stop K-12 Indoctrination.  It’s certainly worth a visit, gentle readers.  Oh, and be glad you don’t have children in the New York City and Fairfax County, Virginia public schools.  Lord only knows what, apart from LGBQWERTY+, is being “normalized” there.