After the Parkland shooting, the anti-liberty/gun Left reflexively regurgitated its standard response: more gun control.  Most did not specify what sort of gun control measures they wanted, they just wanted more gun control, because GUNS!  Some did specify the usual measures: universal background checks, “assault weapon” bans, and closing the “gun show loophole.” Others added a demand to raise the age to purchase long guns to 21.  Some even admitted none of these measures would have done anything to stop the Parkland shooter, but they wanted them anyway, because GUNS!  When will deplorables realize GUNS?!

In the meantime, Andrew Pollack, whose daughter, Meadow was killed in that attack, lobbied for much more realistic measures, as Fox Business reports: 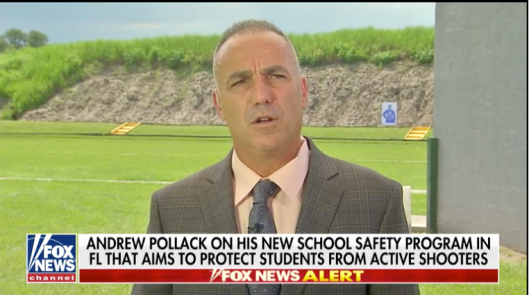 It’s been five months since the Valentine’s Day massacre that left 17 dead at a high school in Parkland, Florida, and since then, a groundswell of survivors and victims’ loved ones have rallied to end gun violence in schools.

That includes Andrew Pollack, whose 18-year-old daughter, Meadow Pollack, was killed in the shooting. Pollack advocated for the passage of a bill that requires every school in Florida to appoint law enforcement officers or armed ‘guardians.’ Gov. Rick Scott signed it into law in early March. ‘It means a lot to me because all of these kids are going to be safer at the start of the school year,’ Pollack said during an interview with FOX Business’ Neil Cavuto on Saturday.

Fox didn’t get it quite right. Here’s the relevant text of the bill:

(1) Sheriffs, in their respective counties, in person or by deputy, shall:

(k) Establish, if the sheriff so chooses, a Coach Aaron Feis Guardian Program to aid in the prevention or abatement of active assailant incidents on school premises.

A school guardian has no authority to act in any law enforcement capacity except to the extent necessary to prevent or abate an active assailant incident on a school premises.

1012.01(2)(a) is available here.  The remainder of the statute refers to the specific qualifications and training “guardians” must have, which includes firearm instruction, active shooter instruction, defensive tactics, drug testing, psych testing, and most importantly:

Significant is that teachers are specifically excluded.  They will be required, by law, to remain unarmed and unable to protect their lives and the lives of their students. 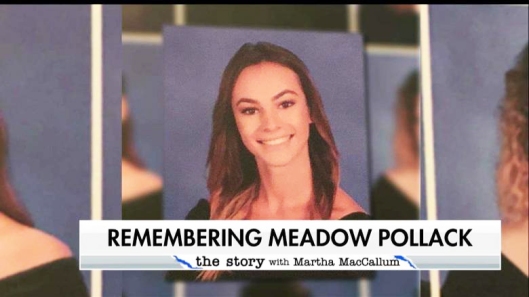 The month-long program — which Pollack said is filled with veterans and retired law enforcement members — requires volunteers to undergo 140 hours of training, including active-shooter simulators. Already, 35% of the class has dropped out, according to Pollack.

The group understands not to take the class lightly: During the inaugural class, Pollack said the Polk County sheriff addressed the class.

‘It’s something I’m never going to forget,’ he said. ‘He said, ‘When you’re at work and you see someone coming into that school and they’re ready to hurt or kill one of our kids or teachers, I want you to shoot them graveyard dead. And if you can’t shoot them graveyard dead, then we don’t want you in this program and the door’s over there, and this job is not for you.’

That much is reasonable.  No one should go armed if they are not willing to use their handgun to save their lives or the lives of others if necessary, in or out of school.

Regular readers may remember that after the Sandy Hook massacre, the Nation Rifle Association recommended posting armed police in every school–some 150,000 schools–in America.  I took the NRA to task on that recommendation, because it would not only be entirely too expensive–police agencies are always understaffed and underfunded–people with the extensive training of police officers are not needed.  Police officers are required to have a broad base of skills and knowledge, most of which have nothing to do with stopping a school shooter.

The Florida program, rather than putting armed volunteers in every school in Florida as the article suggests, leaves it up to individual Florida sheriffs.  Those that want the program are responsible for extensive training–too extensive–and for the maintenance and regulation of the program and its personnel.  Many sheriffs will decline simply because of the continuing manpower requirements and costs.

What this program amounts to is nothing more than the status quo: some schools have armed security guards, most don’t.  Marjorie Stoneman Douglas High School had several unarmed “security monitors,” that were also coaches.  Two of the coach/monitors saw the shooter, but did nothing, one actually hid in a closet, and both have been fired.  Another, Aaron Feis–the program is named for him–tried to stop the shooter and was killed. He too was unarmed by policy, yet sufficiently honorable to try.  Most American schools don’t have armed police “resource” officers, or security guards of any kind.

ANALYSIS:  This is another case of good intentions, but implementation severely hampered by governmental over-regulation.  Having armed “guardians”–security guards by another name–on a campus is better than nothing, but it’s inadequate.  As I’ve so often written, the only thing that truly matters is what a school is able to do when and where an attack happens.  In school shootings, time and distance are all-important.  Unless there are armed adults present when and where an attack occurs, students and teachers are back to the “run, hide, wait to be killed, hope someone with a gun gets there in time” model.  Seconds count, and the police will take, at best, minutes–the usual time has been about 15 minutes–to be in any position to stop a killer.

Marjorie Stoneman Douglas High School has some 12 separate buildings on a 45-acre campus.  Maintaining even two guardians in each building would be unlikely, and considering the size and separation of those buildings, unless a guardian happened, by mere chance, to be perfectly in position to stop a shooter, there will be some number of wounded and dead, that number determined by the shooter’s marksmanship, and the time it takes guardians or police to arrive and find the shooter.  If a shooter is approaching the classroom of your child, would you prefer the teacher be armed and ready, or would you be most comfortable waiting for someone else to arrive.  Would three minutes be too long?  Ten?

It is right to honor Aaron Feis for his selfless heroism.  It would be better to honor a living Aaron Feis because he had the means to stop the killer without having to absorb billets.

The program requires some 80 hours of firearm training.  Private professional schools that produce exceptional skills commonly take half or fewer classroom/range hours.  One wonders what 12 hours of diversity training will contribute to stopping a homicidal madman?  Make no mistake, training–proper, focused training–is a very good thing, but the skills necessary to stop an active shooter are few and specific.

Regular readers will anticipate my recommendation: allow all willing teachers to carry concealed firearms. If the primary principle is to place as many armed and capable good guys as possible in schools so that any attack may be stopped as quickly as possible, this is the only rational solution.  When a shooter bursts into a classroom, what good is a security guard on the other side of the building?  When a shooter opens fire on students waiting for a bus, what good is a security guard in the school gymnasium, some five minutes away at a dead run, after he figures out what’s happening and where?  But in these, and virtually every other scenario, there will always be a teacher or teachers present.  Unfortunately, in Florida, and most other states, that teacher will be little more than a target. 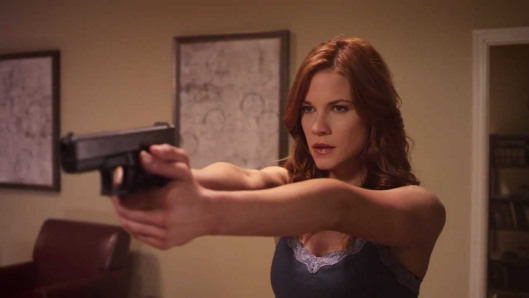 Female teachers are no less potentially capable than men.

Florida is a “shall issue” state.  Citizens, including teachers, not otherwise prohibited by law from possessing firearms, must be issued a concealed carry license upon application.  Yet under this law, a teachers already vetted by the state is specifically prohibited–above and beyond other prohibitions–from being armed to save lives.  A teacher may carry a concealed weapon virtually anywhere to protect their life and the lives of those they love, but upon crossing a school property border, they must surrender their means of self-defense, and they cannot be “guardians.”  Cross that magic border the opposite direction at the end of the school day and they regain the means to preserve their lives.

Such are the workings of a benevolent government, perhaps even a well-intentioned one.

What’s probably going on is the misplaced idea that teachers must focus all of their attention on teaching.  They cannot possibly be prepared for an active shooter, and to carry a gun will somehow damage the pristine, magical educational environment.  Some educators even believe no police should be on campus to disturb the atmosphere, and if present, should be disarmed.  During any school attack, regular school practice is already out the window, and parents and children just might be grateful that a teacher was not only prepared, but took a few minutes out of their teaching schedule–diverted their attention–to save their child’s life.  I am sure, however, some would be demanding the teacher’s head whatever they did or didn’t do.

Government has no conscience. It cares nothing for individuals. It cannot protect any individual, and has no legal obligation to do so.  Politicians may cry “the children, the children,” but when it comes to actually protecting actual children, they virtually always engage in feel good, half measures.  They want people to feel safe; they care little for doing what is necessary to actually be safe.

If the primary principle is to save lives, armed teachers need not have extensive training.  If they have a concealed carry license, they have already been extensively vetted, and are sufficiently trustworthy to carry a handgun almost everywhere but school.  Armed citizens stop crimes and shooters across the nation every day.  Place them, as many as possible, in every school, and provide more extensive training afterward.  That would be in-service training that wouldn’t have teachers considering suicide to end the pain, which is the case with most in-service classes. In April of 2013, 700 Texas teachers attended a handgun training class inspired by the late Chris Kyle.

It’s not possible to understand the depths of Andrew Pollack’s grief.  May God rest Meadow’s soul.  Andrew is to be commended for actually accomplishing more than useless gun control rhetoric.  It’s a start, but the best, most effective, and cheapest alternative is ever present, and will establish the greatest degree of actual safety.

6 thoughts on “School Attacks: The Greatest Degree Of Actual Safety”