The impending trial of former Minneapolis Police Office Mohamed Noor appears to be winding its way through the Minneapolis court system in a leisurely manner.  This from an April 26, 2018 Minneapolis Star Tribune article:

Former Minneapolis police officer Mohamed Noor will plead not guilty in the death of Justine Ruszczyk Damond, arguing that he acted in self-defense when he fired the fatal shot from inside his police SUV.

According to a Wednesday court filing signed by his attorneys Thomas Plunkett and Peter Wold, Noor intends to claim that he used ‘reasonable force’ when he shot Damond should the case goes to trial.

The document did not elaborate further on his defense strategy but mentions that Noor’s attorneys may call private investigator William O’Keefe to testify at trial. Noor’s next hearing is scheduled for May 8.

Noor’s lawyers also filed a normal and expected discovery motion.  How Mike freeman, the prosecutor, responds to this motion will reveal a great deal about his case.  Competent prosecutors who file strong cases are pleased to fulfill all discovery obligations.  That only demonstrates to the defense how overwhelming the case against their client is. If, however, Freeman resists discovery, that sort of resistance is commonly a sign of incompetence and a very weak prosecution case that should never have been filed.

Noor made his initial court appearance late last month and shortly afterward was released after posting $500,000 for conditional bail. He has been ordered to turn over his passport, surrender his firearms and ammunition and refrain from contacting his former partner, Matthew Harrity.

A police spokeswoman said Wednesday that department leaders would not be commenting on the case.

No kidding.  They’re anticipating the wrongful death civil suit.  As I’ve previously noted, I’d be surprised if Robert Bennett, the Damond family attorney, has not begun negotiations already.  The only likely issue is how much Minneapolis is going to have to pay. One may safely assume Justine’s survivors are willing to take the matter to trial.

Local attorneys say it will be difficult for Freeman to secure a guilty verdict on the murder charge, given the lack of body camera footage and the fact that Noor has declined to speak with state investigators or a grand jury probing Damond’s death. Noor is the second Minnesota officer in recent memory to be charged with an on-duty death and the first to be charged with murder.

That’s an interesting standard.  No body camera footage and no confession, no conviction.  How, one wonders, has any criminal ever been convicted of any crime before the advent of body cameras, particularly when they have chosen not to confess?

Noor’s legal team…will likely ask a jury to consider the facts from the perspective of a reasonable officer, a legal standard established in the 1989 Supreme Court case Graham v. Connor, and a common defense in police shooting cases.

‘Police officers get an extra layer of defense, beyond self-defense — they have a statute that provides them with another additional defense, that they can use an appropriate level of defense to protect themselves,’ said Applebaum.

I’m sure that’s the approach they’ll use,but Applebaum’s suggestion there is a statue that “provides them with another additional defense,” is nonsense.  Graham v. Connor (1989) is not a statute, but a Supreme Court decision. The case merely outlines a reasonableness standard for the constitutional police use of force, based on the unique circumstances leading to the use of force.  A good discussion of the case is available here.  The ultimate issue in this case is whether it was reasonable, under the circumstances, for Noor to shoot Justine Damond.  He may have seen movement, perhaps a shadow, or heard a noise, so he fired across the face of his partner.  His tactics and situational awareness were so poor, a completely non-threatening woman in her pajamas, a woman reporting a potential crime, who was demonstrably doing nothing more threatening than trying to talk to him, scared him so badly he shot and killed her.  As I’ve previously written, every citizen of Minneapolis had better hope Noor’s actions were not reasonable, or officers can shoot and kill citizens based on nothing more than unjustified blind panic or whim. 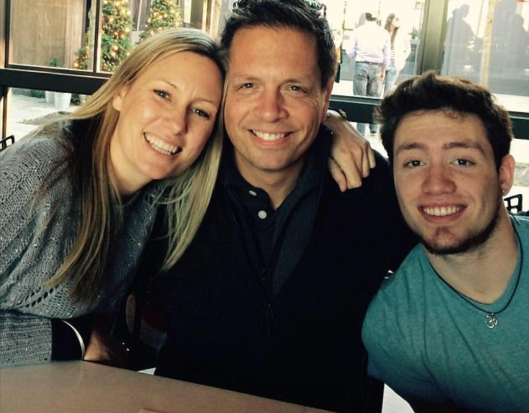 Damond, her fiance Don,(center) and his son, Zach

Minneapolis attorney Mike Padden said that based on the available evidence, the shooting was a case of accidental discharge, making Noor’s claim of self-defense mystifying.

He added that observers might wonder: ‘If he accidentally shot her, then why he didn’t say that?’

‘Well, if he says that, then he’s guilty of some derivative of manslaughter,” Padden said.

The idea that Noor would have necessarily fired more rounds if his shot were intentional is nonsense.  It’s a far too black and white view of reality. Noor’s actions are accidental only in the sense he should not have shot Damond.  Given the circumstances, no reasonable, professional police officer should have.  It is entirely possible he fired wildly and without justification—no accident—and immediately after firing the shot, didn’t fire again because Damond immediately fell out of his line of sight below the door sill of the vehicle, or he suddenly got that “oh shit” feeling a police officer gets when he knows he has done something incredibly stupid, and had just enough sense not to continue to dig that particular hole.  Firing a handgun in the front seat of a car is also a physical shock–very loud and concussive–perhaps sufficient to have stunned him, leaving him unable to fire additional shots.  Noor obviously recovered sufficiently to immediately shut, and lawyer, up.

The union that represents the city’s nearly 900 rank-and-file officers has said it is weighing whether to appeal his termination. A message left for its president, Lt. Bob Kroll, went unreturned Wednesday.

Noor can petition a third-party arbitrator to get his job back, as other officers fired for on-the-job conduct have done. But that path got more difficult last month, after the state appeals court ruled in favor of the city of Richfield in its efforts to fire a police officer after a video of him slapping a teenager went viral online.

The decision was hailed as a major victory in the movement to overhaul the state’s decades-old arbitration system that the Minnesota Chiefs of Police Association deemed ‘broken.

It is not at all unreasonable to interpret the police union’s consistent silence on this case as an admission of Noor’s guilt.  Even police unions are reluctant to defend officers that clearly screwed up, particularly when citizens are killed.  Were I them, I’d realize there was nothing to defend.

The case took another turn at Noor’s second appearance in court, according to a May 8thStar Tribune story:

Assistant Hennepin County attorney Amy Sweasy told the court Tuesday that the discovery process, during which both sides share documents and information that they may present at trial, is ‘largely complete.’ She added that no plea negotiations have taken place.

Noor’s St. Paul-based attorney Thomas Plunkett asked district court Judge Kathryn Quaintance for a meeting with prosecutors to discuss scheduling matters and establish a timeline of future hearings. In a filing last month, Plunkett indicated that his client intends to plead not guilty to both charges, arguing that the former officer was acting in self-defense and used ‘reasonable force’ when he shot Damond.

I’m unsure why Noor has entered no plea, and why the judge has allowed that.  That’s normally done at arraignment—the defendant’s first appearance before a judge, where the charges are read and bond is set.  After all, A guilty plea sets an entirely different course for the court process than a not guilty plea.  I suspect, however, that won’t be the last odd thing about this trial.

He made his initial court appearance last month and shortly afterward was released after posting $400,000 bail, while agreeing to certain conditions: that he turn over his passport, surrender his firearms and ammunition and refrain from contacting his former partner, Matthew Harrity, who was present the night of the shooting.

Harrity was among the dozens of Noor’s former colleagues who were called before a grand jury investigating the case, but it’s unclear whether he offered testimony.

The Police Department and Hennepin County Attorney’s Office each declined to comment on the case Tuesday. It wasn’t immediately clear whether an Internal Affairs investigation into the shooting had been completed.

Any contact with Harrity would be witness tampering.  Regarding Harrity’s testimony, he gave a statement to the BCA, so it’s likely he continued to cooperate.  Having done that initial statement, a later refusal to cooperate would tend to indicate Harrity lied in his initial statement, or believes he’s in criminal trouble.  Since Noor has been fired, the only reason an internal affairs probe would continue was if the Department suspected someone else—Harrity?—did something wrong, or to tie up all possible loose ends if Noor tries to get his job back, and to help with the inevitable wrongful death civil suit.  Surely they’re smart enough to understand the only civil issue is how much they’re going to have to pay?

More as it develops.

15 thoughts on “The Justine Damond Case, Update 20: Slogging Through The Justice System”