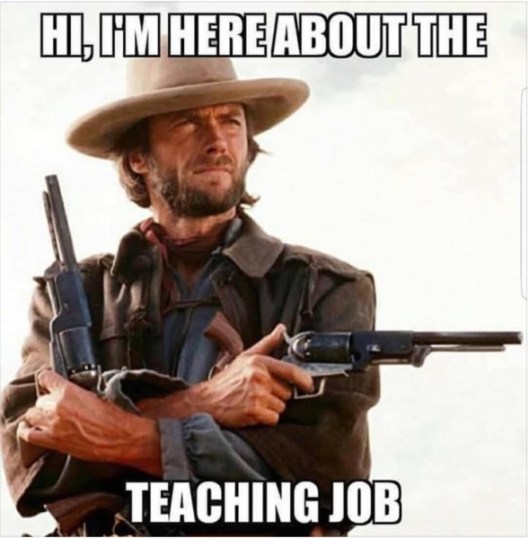 Every year I collect the inadvertently funny things my students write. One might be tempted to think these linguistic train wrecks reflect a general decline in intelligence and ability of contemporary students, but for the most part, they’re a result of kids pushing a little past their current abilities—that’s a good thing—or simply not bothering to proofread, which is a bad, but common, thing.  In any case, I hope, gentle readers, you enjoy this year’s misbegotten crop:

What Are Your Goals For The Year?  “Meat new friends.”

Yummy! “The special effects of the movie were just nutritious.”

His Was?“Bela Lugosi starred as the old man, his was was.”

I Hate It When That Happens: “The scenes were full of bloobers.”

Not The Plants! “The plot of the movie is a race of aliens that believe humans have discovered a weapon that will destroy the union and every plant in it.”

That Really Hurts! “The flying saucers were not real or eye peeling to most viewers…”

I Hate It When That Happens: “When the arm was trying to shoot the aliens down the sky looked fake.”

Use “Droll” In A Sentence: “The sleeping boy had droll falling down his face.”

Use “Droll” In A Sentence: “In her free time, Lauren likes to droll through Central Park.”

Use “Lukewarm” In A Sentence: “This is one of those luke worms.”

You Don’t Say! “God is a spiritual person.”

I Didn’t Know That: “Albert Einstein was very ingenious; he invented the lightbulb.”

Department of Literary Confusion: “Adventures of Huckleberry Finn is a book about the adventures of Tom Sawyer.”

I Can See Why That Would Be Upsetting: “At one point in the book Huck sees humanity in Jim when he is crying about his daughter because he hit her because she was no responding, and she turned out to be death…”

Practice Makes Perfect: “There is no doubt that some children are smarter than adults, but it takes practice to perfect it.”

“Heney”?“It’s normal to southerners to call their family or friends “heney.’”

I Don’t Understand It Either: “Twain, the author of the book Adventures Of Huckleberry Finn, created a new style of writing and even explanation that even he couldn’t understand all the time.”

Tell Me More: “In the book, [Adventures of Huckleberry Finn] there are times when they are undressed…”

Those Are Accomplishments? “Fitzgerald’s life full of many misfortunes and accomplishments, such as alcoholism and his wife’s mental illness…”

Huh? “He also never practiced in literature but was an amazing writer.”

No Wonder The Kids Were Confused: “His mother, by contrast, was a fun-loving, sweet man….”

Twice As Nice: “The book is also full of imagery and double meaning two things.”

Giddyup!“F. Scott Fitzgerald was a rider very much of his own times.”

Thank Goodness! “His English studies did not influence his love for writing…”

Don’t We all: “He was a writer that inspired others, and worked hard throughout his life to make it his own.”

Isn’t That Cruel And Unusual Punishment? “In The Crucible girls were going to be hung or eaten…”

Not To Their Deaths! “If anyone was found guilty of witchcraft they would be hung to their deaths.”

What Kind Of Music Goes Well With That? “InThe Crucible, it was difficult to watch innocent people be hung.  This was enhanced by the music, which fit well with the action of the movie.”

Having It Both Ways: “The slow but quick destruction their culture faced.”

I Don’t Remember Seeing These Movies: “Both the movies ‘inditment’ and ‘The Crusible’ suspended disbelief….”

Imagine That! “The writing was descriptive and painted amazing images to imagine.”

See What Rap Does To You: “After she said her boy was rapped he started to say it because they were driving it into his mind which is easy for kids.”

The Horror: “His desolation was to work at McDonald’s.”

Details, Details: “The film was directed in a very professional way, with shocking twists and the whole bit.”

Huh? “When he found the egg of the queen it ended with him opening his eyes.”

Bras?“A rise of horse races some may call it and with the bras to to get that big uptune sound!”

Boom? “Adding in the brass in the tone of deepness that the composer needs to convey a sense of fright and boom.”

I Was Told There Would Be No Math: “Every actor mathed their character.”

I Hate It When That Happens: “The director does a great job betraying the theme…”

Great Cattle Tales: “That would leave what last moments I have in udder grief and fear.”

I Hate It When That Happens: “No one should go through the pain of being akken.”

Thank You For Sharing:  “…but I would share the disease with people around me to learn what it’s like.”

I Hate It When That Happens: “Being awakened though would be a little skart.”

Musical Adventures: “In the movie, the music did a good job highlighting the music at the right times of the music.”

More Right Than They Imagined: “…however, a lot of journalists tend to spit their opinion….”

Ant Man Would Like This: “Journalists can report ant facts and find the truth or they can make it up.”

That Would Change My View Too: “…when I saw this article by God that changed my view of how I look at him.”

Introspection Department: “…take my advice and look into yourself before believing anything the newsperson says.”

So Speaking Clearly Makes You Sick? “Clarity of diction is viral for a public speaker.”

And, as Sonny Bono said, the beat goes on.