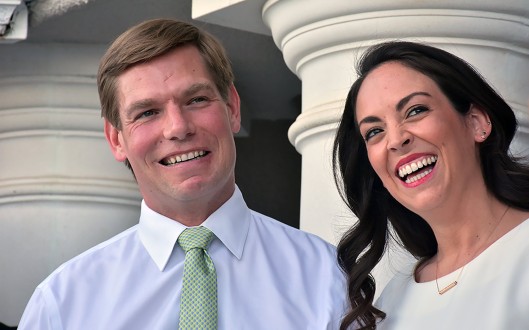 Whenever there are cries for “common sense gun safety” measures, we are assured no one wants to do away with the Second Amendment—pay no attention to the elderly former Supreme Court Justice behind the curtain!–or take away anyone’s guns. Those that don’t trust such soothing claims are proclaimed to be dupes of the NRA, have blood on their hands, want to kill children, etc.  Let us therefore, gentle readers, wash the blood off our hands and pay rapt attention to one Eric Swalwell.  Why should we listen to him?  He is a US Representative, “a Democrat from California’s San Francisco Bay area, [he] is co-chair of the House Democratic Steering and Policy Committee.”  It would seem reasonable to think he represents the intentions of House Democrats, as he recently explained in USA Today.  Swalwell begins with the story of what sounds very much like a gangbanger shooting a man with a semiauto AK variant:

Trauma surgeons and coroners will tell you the high-velocity bullet fired from a military-style, semiautomatic assault weapon moves almost three times as fast as a 9mm handgun bullet, delivering far more energy. The bullets create cavities through the victim, wrecking a wider swath of tissue, organs and blood vessels. And a low-recoil weapon with a higher-capacity magazine means more of these deadlier bullets can be fired accurately and quickly without reloading.

An assault weapon, then, is a hand-held weapon of war, capable of spraying a crowd with more lethal fire in seconds.

Not quite. As I’ve often written, there is no such thing as an “assault weapon,” and the semiautomatic rifles about which Swallwell speaks are no different in capability than any other semiautomatic rifle.  While some may outwardly resemble actual military assault rifles—a clearly defined, limited class of weapons—they are not fully automatic rifles, and are surely not “hand-held weapon[s] of war.” Magazine capacity is essentially irrelevant, unless one is forced to defend oneself or their loved ones against an attack by multiple assailants.  Then, it can deter, or end such attack.  The rounds such rifles fire–very much intermediate rounds–are also far less powerful than Swalwell represents.

So Gary didn’t stand much chance. First-graders and teachers in Newtown, Conn., didn’t either. Nor did dancers at the Pulse nightclub in Orlando, nor concert-goers in Las Vegas, nor teenagers at Marjory Stoneman Douglas High in Parkland, Fla., nor the people at the Waffle House outside Nashville. Like so many American mass-shooting victims in recent decades, their doom was all but assured by the murderer’s tool.

Actually, their “doom was all but assured” because they were all trapped inside gun-free zones, places not remotely designed for security, unable to save their own lives.  They were victims of progressive ideology that holds feeling safe is far superior to being safe.  He also neglects to mention a recent attack that was stopped by a citizen with an AR-15, but to people like him, there can be no positive uses for firearms.  Swalwell’s solution is predictable:

Nonetheless, we can give ourselves and our children the chance these victims never had. We can finally act to remove weapons designed for war from our streets, once and for all.

Reinstating the federal assault weapons banthat was in effect from 1994 to 2004 would prohibit manufacture and sales, but it would not affect weapons already possessed. This would leave millions of assault weapons in our communities for decades to come.

Instead, we should ban possession of military-style semiautomatic assault weapons, we should buy back such weapons from all who choose to abide by the law, and we should criminally prosecute any who choose to defy it by keeping their weapons. The ban would not apply to law enforcement agencies or shooting clubs.

Now we see that Swalwell, and surely the Democrat steering and Policy committee he co-chairs, really do want to confiscate guns, in this case, an entire class of common, popular semiautomatic rifles.  Obviously all AR-15 and AK variants and anything else in that class, but we’re really talking about an action type, and certainly about magazine interchangeability.  Should Swalwell and his fellow Democrats get their way, an updated law would ban all semiautomatics.  Oh, it would start with the scary looking guns, but eventually, if they could establish that precedent, every semiautomatic rifle would be forfeit.

This is particularly pernicious in that the “assault weapons ban” was allowed to sunset because even Democrats had to admit it accomplished absolutely nothing for public safety. Imagine that: inconveniencing the law-abiding, infringing on their fundamental, unalienable rights, didn’t prevent crime or make anyone safer.  Who coulda thunk it?  But Swalwell wants to uphold the Constitution, right?  He took an oath to that effect, right?

There’s something new and different about the surviving Parkland high schoolers’ demands. They dismiss the moral equivalence we’ve made for far too long regarding the Second Amendment. I’ve been guilty of it myself, telling constituents and reporters that ‘we can protect the Second Amendment and protect lives.’

The Parkland teens have taught us there is no right more important than every student’s right to come home after class. The right to live is supreme over any other.

Would it be possible for Swalwell to more clearly express his desire to destroy the Second Amendment?  He confuses a governmental power to determine what means citizens will be allowed to protect their lives, with the natural right to self-defense.  If one does not have that right, and the most effective means to exercise it, there is no right to life, only a government-regulated privilege temporarily extended to those politically useful to the current government.

Swalwell trots out the usual argument that Heller didn’t specifically speak to a right to own “assault weapons,” and several lower federal courts have “upheld assault weapon bans.”  To his way of thinking, government has few, if any, limitations on what it can ban. After all, we can’t have the Second Amendment and protect lives.  He also praises Australia’s gun ban/confiscation scheme, specifically mentioning rifles and shotguns.  But gun banners would never go after shotguns!  Yes they would, just like Australia.  That nation bought back guns at a price of some $300 million US dollars+ back then.  That “buy back” wasn’t voluntary, by the way.

America won’t get off that cheaply. Gun ownership runs so deep that we don’t even know how many military-style semiautomatic rifles are in U.S. civilian hands.

The horror.  Law-abiding citizens with guns.  Free men and women with guns, the means to deter tyranny and protect themselves. But Swalwell has a plan to rectify that oversight:

Based on manufacturing figures and other indirect data, there could be 15 million assault weapons out there. If we offer $200 to buy back each weapon— as many local governments have — then it would cost about $3 billion; at $1,000 each, the cost would be about $15 billion.

Swalwell compares that to the federal budget and concludes that $15 billion for such a noble cause is chump change, but the “comparatively meager scraps” tax relief has given to working Americans will horribly increase the national debt.

What is it worth to American taxpayers to not see our families, friends and neighbors cut down in a hail of gunfire? Consider this an investment in averting carnage and heartache and loss.

One might also consider it an investment in disarming Americans to pave the way for socialist utopia. To people like Swalwell, that is priceless.

As I’ve often written, no progressive/socialist policy can possibly be wrong.  They cannot, by definition, fail.  Therefore the decade-long “assault weapon ban,” which by any objective measurement, was an abject failure—if improving public safety is the concern—didn’t actually fail.  It just wasn’t restrictive enough.  Banning the manufacture of such weapons and magazines of greater than ten-round capacity was not nearly sufficient to achieve such lofty goals.  We need to do that, and more, to take all of those guns—could Swalwell and his compatriots possibly overlook magazines?—away from all Americans.  Turning owners into instant felons, and imprisoning them would, of course, be necessary to show the deplorables who’s boss.  For once, Democrats would not want to open the prisons; they’d be delighted to put gun owners in jail and throw away the key–fewer conservative voters that way.

Swalwall’s article gives other indications of his ultimate intentions. He emotionally speaks about the horrific destructive power of intermediate rifle ammunition, the kind fired by the “assault weapons” he would confiscate.  Are we to believe Swalwell doesn’t know that actual high powered rifle—and many pistol—rounds are not substantially more powerful?  Are we to believe that if Swalwell could ban an entire class of firearms, he would leave their ammunition alone, and having established a banning precedent, would not go after all much more powerful rifle ammunition and the guns that chamber it?  Gun banners have, for decades, occasionally suggested “sniper rifle” bans, which would encompass every scoped hunting and target rifle.  Oh, and bolt action rifles were “weapons designed for war” too, and so were pump action shotguns.  Surely we must get them off the streets as well if we’re to properly sacrifice liberty for safety? 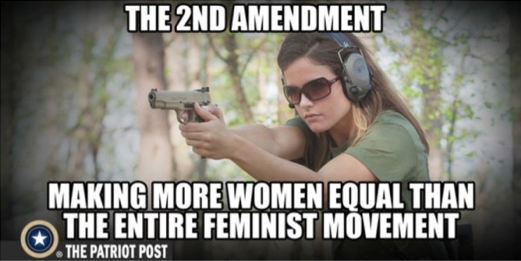 Swalwell has actually done America a favor.  In using the usual progressive approach of emotion rather than fact and logic, and in honestly admitting Democrat’s intentions, he may actually help Americans make places like gun-free zones a thing of the past. The problem is never the tool; it’s human nature.  Democrats tend to believe with the right policies and laws, they can regulate or change that, but that’s a fool’s errand.  Absent that magical change in human nature there is nothing more important than the right to self-defense, the right–and means–to overcome evil.

Don’t the innocent deserve the most effective available means to do that?