In The View: Ill-Informed, Intolerant Bigots, I wrote of ABC’s The View, where Joy Behar gratuitously insulted not only Vice President Mike Pence, but all Christians. What was most disgusting about her comments was her certainty her crude hatred would be not only welcomed, but lauded by her audience—it was—and her network, and she would suffer no backlash. Had she done that during a previous Republican administration, she would have been right, but under Donald Trump, such gratuitous and ugly calumny does not go unopposed. Fox News reports: 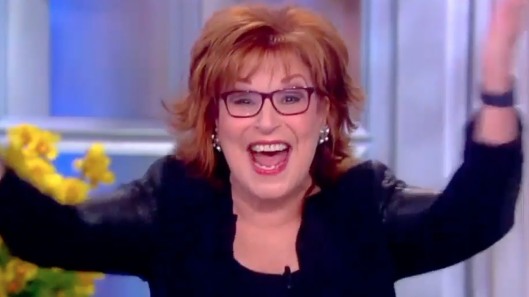 ABC News star Joy Behar apologized for mocking Vice President Mike Pence’s Christian faith on Tuesday, ending a month of outcry stemming from remarks she made that have been called ‘slander’ and ‘anti-Christian bigotry.’

Pence appeared on Fox News Channel’s ‘Hannity’ Monday evening, urging Behar to apologize to ‘tens of millions of Americans who were equally offended’ during the conversation – and she obliged.

‘I think Vice President Pence is right. I was raised to respect everyone’s religious faith and I fell short of that,’ Behar said on Tuesday’s edition of ‘The View.’

‘I sincerely apologize for what I said,’ Behar added.

VP Pence was gracious in accepting Behar’s apology, but suggested she should apologize to the tens of millions of Christians she slandered. A truly contrite person would publically apologize to the Vice President–because it was a public offense–and to everyone she slandered, and do so without a month’s increasing outrage forcing the issue. Considering, however, people like Behar live in a progressive echo chamber, where it’s unlikely anyone at The View, or ABC, disagreed with her original insults, or thought anything wrong with them, it’s understandable decent people outside that echo chamber had to spend a month convincing her employers she had better walk back her crude, smirking prejudice.

MRC President Brent Bozell issued a statement declaring that Behar’s private apology was ‘not nearly enough’ and promised to continue his campaign against ‘anti-Christian bigotry’ at the network. Bozell’s watchdog group is presently running a campaign on behalf of aggrieved Christians, urging that viewers contact ‘View’ advertisers about Behar’s ‘hateful, anti-Christian remarks.’

Upon learning of the apology, Bozell issued the following statement to Fox News:  ‘Our campaign against ‘The View’ and Joy Behar has concluded. Even though it took a full month, Joy Behar did the right thing today to publicly apologize for her offensive remarks. I want to thank and congratulate the massive number of Americans who supported our effort and stood up to this anti-Christian bigotry with your calls, letters and messages. Over 43,000 phone calls were placed to ABC and their advertisers demanding an apology. This clearly has taken a toll on ABC and has left a black mark on advertisers Clorox, Gerber, Oreo and Home Advisor who were utterly silent in reply to the uproar from their Christian consumers. While our campaign is over, let it be made clear: we will not hesitate to come after any TV personality or media figure who engages in this type of anti-Christian bigotry. Nor will we spare any effort to denounce the sponsors of such hatred. Christians are fed up, and aren’t going to take it anymore.

One might assert that Behar, ABC and similar individuals and organizations treat all faiths equally. I cannot, however, recall a single instance of such people or entities insulting Islam, or any other non-Christian faith. This is in part because progressives reflexively support anyone that shares their disdain for “normal” America. Even though Islamists delight in oppressing, beating and slaughtering the very victim groups progressives claim to champion—gays, women, the transgendered, etc.—they mostly oppose normal, mostly Republican/conservative America, which includes protestant and non-protestant Christianity. Islamists would feel compelled to enslave, rape, torture and murder the women of The View, yet their hatred for their fellow Americans, and particularly Christians, compels them to embrace those that would murder them and destroy the government by the people, which makes their pampered, privileged lifestyles possible.

The reluctance of people like Behar to similarly slander Islam also owes to their perpetually unacknowledged understanding that Islamists have no religious mandate to turn the other cheek. The worst Christians tend to do is complain about the lies and unjust treatment accorded them by the self-imagined morally and intellectually elite. Islamists, on the other hand, tend to murder anyone they think might insult their faith or prophet, and they’re not shy about splitting rhetorical hairs.

Obviously, Christians should never imitate this example. The Christian faith is entirely voluntary, and does not seek to conquer the world by the sword. This does not mean Christians should remain silent when thoughtless active and passive allies of people, countries and faiths that would destroy the single nation in history most religiously free spread lies about them, lies that may well encourage some to hatred and violence.

As a practicing and sincere Christian, Vice President Pence can, and probably will, forgive Behar. All other Christians, however, have no such obligation. Behar attacked the faith and all its adherents, not any specific Christian beyond Pence. Ultimate forgiveness must come from the Lord. Individual Christians are free to avoid Behar’s program, and to choose commercial products other than those advertised on The View. Most will surely pray for her and wish her well. Such is the mental illness of Christianity.

Christians are also free to determine whether Behar’s “apology” is sincere. In so doing, they may come to a conclusion about the depth of Behar’s character, or lack thereof. It might be useful to consider whose acts and rhetoric are more reflective of mental illness: faithful, peaceful Christians, or the reflexively hateful, angry women of The View.

1 thought on “The View: Sincere Apology?”