Hans and Franz pumping us up
credit: nbc

Back in days of yore, when Saturday Night Live was actually funny, Hans and Franz were here “to pump you up!” They made good-natured, gap-toothed fun of “girly men” everywhere.

Reporters are justly notorious for embarrassing themselves with their hysterical, deceptive reportage on guns and all related matters. Not only do they generally have no idea of proper terminology, not only do they present “experts” that are anything but, upon occasion, an incredibly brave reporter will venture forth and actually fire a–shudder–gun. In so doing, they invariably expose themselves to be, as Hans and Franz used to so accurately say, girly men.

In 2016, I exposed just such a girly man, one Gersh Kuntzman–I am not making up that name–at Bearing Arms:

Not in my hands. I’ve shot pistols before, but never something like an AR-15. Squeeze lightly on the trigger and the resulting explosion of firepower is humbling and deafening (even with ear protection).

The recoil bruised my shoulder. The brass shell casings disoriented me as they flew past my face. The smell of sulfur and destruction made me sick. The explosions — loud like a bomb — gave me a temporary case of PTSD. For at least an hour after firing the gun just a few times, I was anxious and irritable.

Even in semi-automatic mode, it is very simple to squeeze off two dozen rounds before you even know what has happened. In fully automatic mode, it doesn’t take any imagination to see dozens of bodies falling in front of your barrel.

Mr.–I assume he’s woke with that pronoun–Kuntzman is writing about actually firing–the horror–an AR-15. I compared him to actual girly girls, though the comparison was unfair to girly girls who turned out to be far more manly than Kuntzman:

As a fellow member of the patriarchy, I worry about Mr. Kuntzman’s masculinity and self-image. I have, on numerous occasions, introduced females, including little girls no older than 10 and no more than 70 pounds, to the awe-inspiring power of the AR-15. Granted, they had to fire from a supported position, lacking the strength to support the 7-pound rifle for long otherwise, but after firing many rounds, their universal reaction was one of delight–they found the little rifle’s accuracy and ease of use pleasing–and not a bruise among them. The same is true of adult women, many no more than 110 pounds sopping wet.

Mr. Kuntzman seems a bit delusional in other ways. Unless he is left handed and fired the rifle from his left shoulder, there would have been no brass flying past his face to disorient him, and the odors he reports might be experienced when firing a black powder rifle, but not a rifle using modern ammunition. And what, I wonder, does “destruction” smell like? And explosions? “Loud like a bomb”? I can only hope a sensitive fellow like Mr. Kuntzman is never within aural range of an actual explosion. Judging by his reaction to the report of an AR-15, which is mild indeed among rifle cartridges–and even some handgun cartridges–he’d be unlikely to survive.

Bearing Arms readers have made Daily News Writer Somehow Survives Trauma Of Firing America’s Most Popular Rifle quite popular. There is apparently something about watching a ‘man’ deconstructing his manhood, on purpose, in public that is compelling, rather like a particularly gory car accident: you just can’t tear your eyes away. 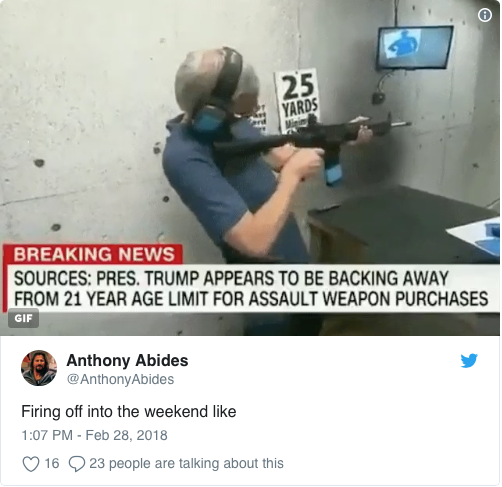 We now, after the Kuntzman debacle and post-Parkland, after an intervening time of pussy hats and people marching about dressed as vaginas, have a new model of girly masculinity, CNN’s Gary Tuchman, as Powerline reports:

Perhaps the Democrats thought their Children’s Crusade would put them over the top this time, after repeatedly losing the battle over guns. But so far, it doesn’t look that way. Most people believe that stricter gun laws will either have no effect or lead to increased violent crime. And Rasmussen finds that 54% think massive government failures are mostly to blame for the Parkland, Florida shootings, while only 33% blame a lack of gun control. Interestingly, the finding is even more pronounced among those who have school-age children: 61% think government is mostly to blame, while only 23% point the finger mostly at guns.

In other words, despite the non-stop efforts of CNN and MSNBC, attitudes toward gun control and violent crime haven’t changed much. It may well be that a few modest changes will be made, e.g. a ban on bump stocks, which hardly anyone cares about. But if the Democrats believe they can ride vilification of America’s largest civil rights organization to victory in November, I think they are mistaken.

Finally, this is a serious topic, but I can’t resist a moment of levity. This is a video of CNN’s Gary Tuchman firing an AR-15 at a range. Why he allowed himself to be filmed, I have no idea. I hadn’t realized it was possible to shoot a rifle so incompetently. It isn’t clear what Tuchman is shooting at–normally, one would assume a target–but the way the gun’s muzzle is bouncing around, he must be spraying bullets all over the opposite wall.

By all means, take the Powerline link and view the mercifully brief video. As John Hinderaker noted, I can’t imagine why Tuchman would allow himself to be filmed behaving like such a girly man. Little girls I have trained on the AR-15, all of 70 pounds sopping wet, have uniformly performed much better than Tuchman, perhaps because I actually showed them how to fire a rifle. I can only surmise CNN was trying to demonstrate how evil and uncontrollable a high-powered rifle like the AR-15 is, and how it can fire so quickly it could lay waste to nations, or at least, schools. The AR-15 is not remotely a high-powered rifle. Its recoil is mild, and its excellent ergonomics make it easy to shoot effectively. Tuchman was taught and supposedly supervised by a retired Lt. General, one Mark Hertling.

CNN’s own video features Hertling claiming the AR-15 is so hard to shoot, so  powerful and deadly using it requires intensive, professional training, and it “is not for everyone.” Hertling not only demonstrates his profound lack of knowledge of the AR-15 and its employment, he actually claims he could not keep five successive rounds on a target due to the weapon’s fearsome power. Considering Hertling’s lack of skill with the weapon, I can understand his concerns. Not only does he fail to actually tuck the buttstock securely into his shoulder, he actually leans sharply to the right, his head out of position to use the sights, causing the rifle to bounce about like a hip hop dancer on speed. Take the link to the CNN video and watch the muzzle dance wildly due to Hertling’s utterly incompetent handling of the rifle, which he termed a “full semi automatic.” It’s hard to tell whether he was trying to confuse viewers into thinking it the same as a fully automatic military M4, or whether he is really just incompetent.

Unsurprisingly, with a teacher like Hertling, Tuchman is even worse, likely spraying the walls, floor and ceiling with bullets. His fierce grimace as he fires every round is classic.

For comparison, view this video of a comely young lady using a proper stance and grip to fire an AR-15. While her forward lean is a bit unnecessarily aggressive, notice her head is erect, her cheek and shoulder in proper contact and placement with the rifle, which allows accurate shooting and an accurate depiction of the rifle’s mild recoil and muzzle rise.

Or better yet, view this video of a 7 year-old girl shooting an AR-15. She’s shooting from a supported position, but uses proper technique. Notice how little recoil the rifle produces, and how she demonstrates no grimace, but delight.

The comely lass, and the little girl make Hertling and Tuchman look like the anti-gun, girly men shills they are. They’re definitely not here to pump up liberty.

10 thoughts on “CNN: Not Here To Pump Up Liberty”