I enjoyed Blade Runner when it debuted in 1982. In those days, the idea of artificial life–androids, if you will–was something on the minds almost exclusively of serious fans of science fiction. Lt. Commander Data of Star Trek: The Next Generation was five years into the future, and one of the most interesting plot devices of that series was his continuing quest for humanity. But let us return to 1982 and Harrison Ford’s gritty portrayal of Rick Deckard. In many ways, the movie was starkly original, from the atmospherics of a more or less ruined planet, to the squalor of a massive, uncaring city, the dark and dank atmospherics of the film worked, primarily because the computer graphics of the time were cleverly and well done. Director Ridley Scott’s sure hand with sci fi, and a slightly less then two hour run time made the movie fast paced and continually interesting.

Fast forward to 2017/2049 and a sprawling movie of two hours and forty-four minutes. Director Denis Villeneuve seems far more interested in replicating and surpassing the atmospherics of the original movie than worrying about coherent action and plot, thus are there long sequences with little happening, but admittedly compelling scenery. One can nominally find a plot and sub plot or two about what it is to be human versus what it is to be an artificial being, and the action revolves around Deckard and the child he had with Rachel, played by Sean Young in the original film.

I’ll not go into great detail about the plot. I chose to wait to see the movie on DVD, and while I have a capable surround sound system, I found much of the movie incomprehensible. Many scenes have a droning sound track of pseudo-music and other noise underlying the dialogue, which again appears to be something Villeneuve thought cutting edge. I was unable to filter it out, and could hear little of the dialogue in those scenes. In a movie with relatively little dialogue throughout, one can’t afford to miss much before going adrift. Perhaps this was not the case in theaters, but relatively few people saw the movie there, so I suspect my experience will be the experience of most that will eventually see the movie.

Briefly, K, who is a replicant, stumbles onto evidence that Deckard and Rachel bore a child, which isn’t supposed to be possible. He hunts for and eventually finds Deckard, and for awhile, thinks he’s Deckard’s son, but he isn’t. Niander Wallace, played by Jared Leto, is an evil maker of replicants, and Luv, played by Sylvia Hoeks is his equally evil replicant henchperson. Wallace wants to figure out how to make female replicants pregnant to save money–or something–and establishes his evil persona by disemboweling, for no apparent reason, a newly born, naked female replicant. Luv disembowels Robin Wright’s gritty Lt. Joshi. K finds Deckard, Luv kidnaps Deckard. K rescues Deckard but is badly wounded in the process, but apparently kills Luv. K takes Deckard to meet his daughter, played by Carla Juri, a girl in a bubble due to a rare genetic condition. By then, K realizes he’s not Deckard’s son, and lays down, maybe dying, maybe not, and it’s snowing–maybe–which might symbolize purity, the universe’s blessing on K, or maybe it’s just another bit of atmospherics the director couldn’t resist.

The movie isn’t devoid of value. Ryan Gosling’s K is a mostly unsympathetic character, but he does, upon occasion, demonstrate a little humanity, particularly in interacting with his holographic mistress, Joi, played by Ana de Armis, and also when Joi enlists a real prostitute to stand in for her, played by the interesting Mackenzie Davis. The action sequences involving K are few, but relatively well done. Mostly, K wanders about expressing all the emotion one expects of a graduate of the Mt. Rushmore School of Acting. I know he’s a replicant, but they aren’t that bland, are they?

Wallace has odd, perhaps blind, eyes, and small electronic modules that plug into his neck that might give him sight, or a buzz, or something. In any case, a blue LED in his neck glows. His dialogue is mostly pseudo mystical/philosophical, self-referential monologues. After his last scene, he vanishes and nothing more is heard from or of him. Menace established; menace goes away.

Dave Bautista is developing into a solid actor, but he’s a replicant killed by K early in the movie. Robin Wright is a cynical, probably dirty cop, who cares, at least a little, about K. 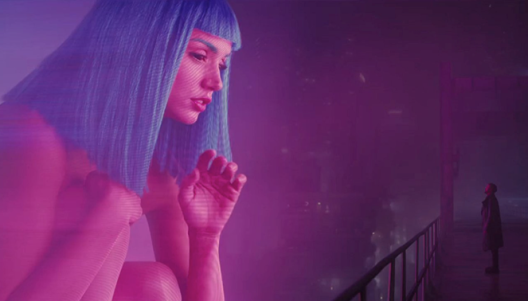 The special effects are, in most instances, excellent. Sets and props are interesting. Costumes are bland. K wears the same clothing throughout the movie, including a very long, heavy leather coat with a large collar and lapels. I’ve never understood why Hollywood persists in burdening action heroes with the kind of restrictive clothing no one with tactical chops or knowledge would wear. But then again, the director seemed much more interested in visuals than anything else in this movie.

Many reviewers loved the movie, finding all manner of depth and beauty therein. The movie going public obviously did not agree. On a production budget of $150 million, it made about $92 million domestically. One assumes foreign receipts and DVD sales might allow the film to break even, perhaps make a bit of profit, but this is not sure fire sequel material.

Do replicants have souls? Who knows? Data did it better, and one could understand the dialogue and plots. Anyone with a DVD of the original may wish to buy this movie, just to have the set, but won’t be ill-served by waiting until it hits the $5.00 bin. Few will watch it more than once.