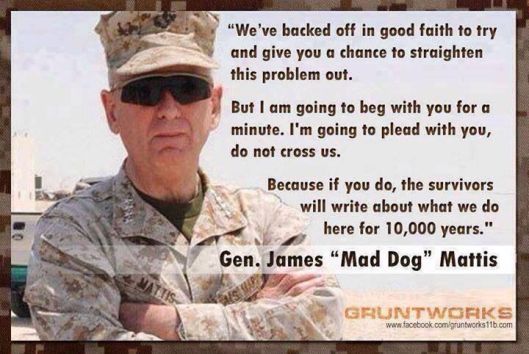 I’ve written about Secretary of Defense James Mattis (USMC Ret.) one several occasions, here, and here.  General Mattis is not of the “leading from behind” contingent of foreign policy. Now and again, Americans have been fortunate to find the right men for the right jobs. Mattis is such a man.

We live in an age when the malicious and uninformed take cheap shots at the women and men serving in our military, such as the California high school social studies teacher who, in a classroom rant sparked by a student wearing clothing with a Marine Corps logo, said of our military, among other things:

Had General Mattis been there, I’m sure we’d have yet another memorable Mattis missive to publish.  Fortunately, that teacher is finding himself in much deserved hot water. The good folks at  Legal Insurrection have more on that situation.

The topic of this article is yet another example of why men like Mattis are precisely the kind of people we want in charge of our national defense, and yet another example of the wisdom of President Trump in picking him. Clearly, Mr. Trump is not afraid of strong subordinates, which is the mark of a leader. The Daily Caller reports: 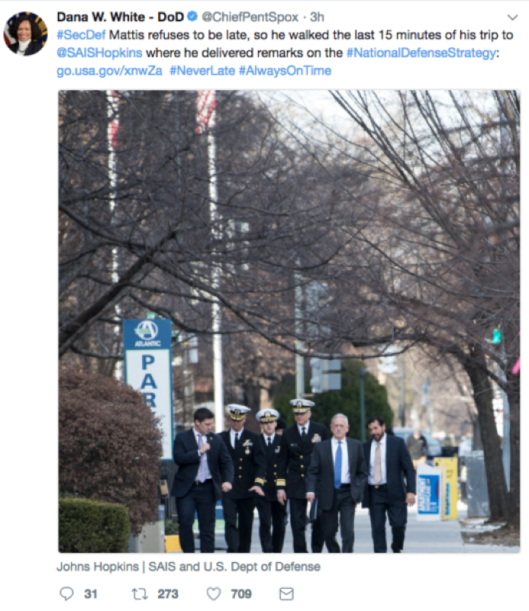 Secretary of Defense James Mattis has a reputation of being a military man’s military man.  During his service, Mattis was known for his strict adherence to the rules and chain of command. His devotion to the military code of conduct and way of life has served him well in earning the respect of the men serving under him.

Mattis continues to show his devotion to his creed, visiting the troops often, speaking bluntly and even doing his own laundry at the Pentagon.

On Friday, Mattis was scheduled to speak to the Johns Hopkins School of Advanced International Studies.

According to his press secretary, Mattis was caught in unforeseen travel difficulties on the way to a speech, which promised to make him late.

When it became clear that Mattis would not be making it on time for a speech he was to deliver, the secretary took matters into his own hands.

Mattis got out of the vehicle, and ordered his staff to do the same. Mattis walked the rest of the way on the sidewalk to the speech.

Caught in traffic, General Mattis got out and walk rather than be late for a speech, rather than waste the time of those waiting to hear him. How often do we hear about that kind of consideration of the time and importance of others? If I were Little Rocket Man, I wouldn’t want to see that either.

2 thoughts on “Another Mattis Moment”