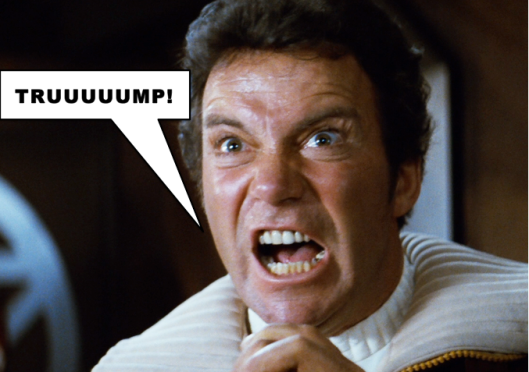 One of the continuing complaints about President Donald Trump, complaints registered not only by his progressive, self-imagined elite enemies, but by “never-Trumpers,” is Mr. Trump is crude. This crudity manifests in every imaginable way: speech, manners, thoughts (imagined by his enemies and ascribed to him) manner of dress, everything. So infectious is Mr. Trump’s boorishness, it transfers to all near him, as evidenced by Mrs. Trump’s fashion sense. Remember when she dared to wear high heels as she boarded a plane to travel to a hurricane zone? No self-respecting elite would ever do anything like that. So crude is Mr. Trump, that alone is, in the fevered imaginations of Trump haters, sufficient cause for impeachment. 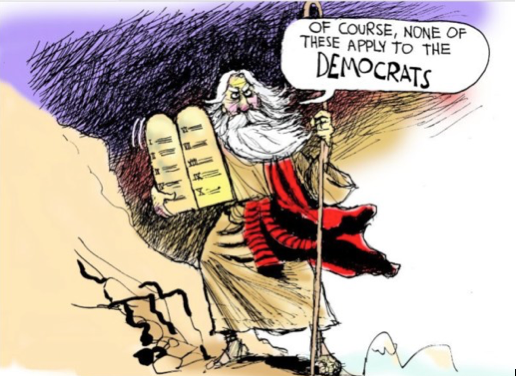 What’s actually going on is a manifestation of the deranged hatred of the elite for the American people, the “normal,” the benighted residents of flyover country, the God and gun clingers. That the elite express their hatred in the crudest, most obscene and maliciously violent terms, that they routinely wish mutilation, torture and death on those they hate–and their spouses and children–that they unlawfully and ruthlessly use the federal government against those they hate, doesn’t matter. The rules they wish to impose on normal don’t apply to them. Their crudity is necessary, justified. They must have leave to think and do as they will that lesser beings may receive the inestimable benefits of their munificence.

They also hate Mr. Trump because he is not “nuanced” as Barack Obama and his acolytes were. He dares to put America first, to praise America. This is particularly objectionable when he does it in foreign countries, and when he crudely tries to uphold the rule of law and the sovereignty of America, which is very non-globalist and therefore, not at all elite. And then he did it again, as Fox News reports:

President Trump hit back Friday at the growing international outrage over reports that he questioned why the U.S. was taking immigrants from ‘s—hole’ countries, while taking aim at a so-called immigration ‘deal’ announced by a group of senators the day before.

In a series of tweets, Trump both defended his immigration stance while claiming the remarks attributed to him weren’t accurate.

Mr. Trump is reported to have suggested the “shithole” countries are places like Haiti and some African and Central American countries, which are, by any civilizational measure, precisely that. .

As one might imagine, spokesmen of other countries–including American progressives–were not amused. Apparently, all countries are equal in every way. How this comports with celebrating diversity has yet to be explained. 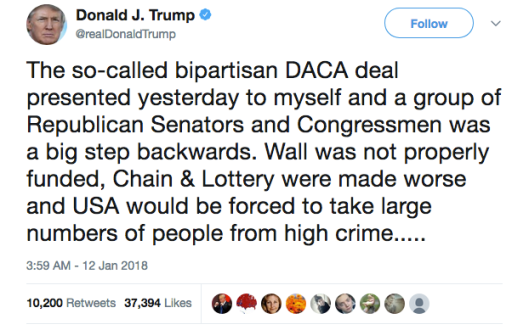 ….countries which are doing badly. I want a merit based system of immigration and people who will help take our country to the next level. I want safety and security for our people. I want to stop the massive inflow of drugs. I want to fund our military, not do a Dem defund….

How do we know Mr. Trump is correct and the deal offered was a bad deal for America? It was put together by a group of Senators infamous for doing their best to damage America, particularly where immigration issues are involved:

The ‘deal’ in question was introduced to the president by a group of six senators—Republican Sens. Lindsey Graham, R-S.C., Jeff Flake, R-Ariz., Cory Gardner, R-Co., and Democratic Sens. Dick Durbin, D-Ill., Michael Bennett, D-Co., and Robert Menendez, D-N.J. They did not detail what was included in their deal. 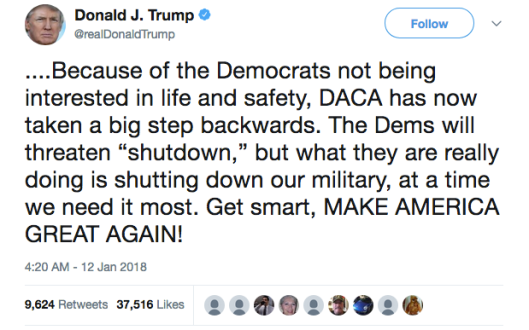 Despite some conservatives worrying Mr. Trump would get squishy on immigration, he has shown no sign of caving in thus far. He continues to demand a border wall, a merit-based immigration system and the end of lottery and chain immigration. Considering he ran on these issues, and they will largely determine the success or failure of his administrative, and our nation, that’s a good thing. 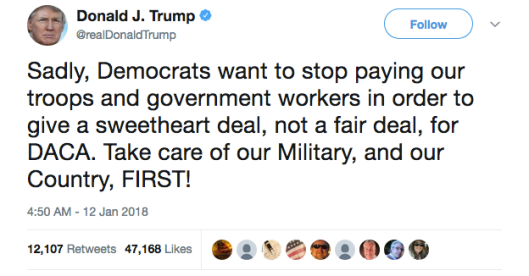 The media has had a field day with Mr. Trump’s supposed comment, as PJ Media reports:

On Thursday night, CNN’s Chris Cuomo brought out a white board and wrote ‘SH*THOLE’ on primetime television. Not only did he call President Donald Trump this name, he also twisted the story of how Trump used the word.

‘We just have to be very clear about what’s going on in the White House, because the president is just showing you who he is. This is who he is, okay? We sum it up in a word, okay? There it is,” Cuomo said, as he wrote ‘SH*THOLE,’ with an ‘I.’

Cuomo continued berating Trump. ‘This is the gift that he decided to give the American people. It’s a bad word, my kids are watching right now. I don’t want to teach my kids and your kids a bad word, our president decided to make that choice.

And of course Mr. Cuomo, once hearing a “bad word,” is helpless to do other than to parrot it for his children, and CNN’s 12 other viewers. President Trump did not say that—if he indeed said it at all—publically, but in a closed-door, private meeting. That CNN has that word to say at all was due to an improper leak. Some pathetic, 3rd grade playground squealer ran to the media teacher. It did, however, give CNN an opportunity to say “shithole,” over and over and over again, repeated by multiple anchors on multiple shows, all apparently compelled to endlessly repeat any such description.

Where the elites consistently fail to understand Mr. Trump, and normal Americans is normals don’t consider President Trump crude, at least not for describing countries that are more than figuratively shitholes as such. Oh, Mr. Trump might occasionally say something impolitic, but in this case, he didn’t say it publically, and his elite enemies, including Republicans, tried to use it to harm him. Normals see it as an attack on them too, and they’re not amused.

Normals appreciate America and its bounty, secured by generations of hard work and self-sacrifice, and they’ve gladly taken their place in securing it for the generation that follows them. They know well how miserable life is in other countries, and when those countries demand our respect, demand to be considered on a par with America, they’re angered. They’re angered no less when such people demand to immigrate, fleeing the utopias of their birth. They’re angered because we spend billions to help those countries, billions that often come nowhere near suffering millions, but only fill the Swiss bank accounts of corrupt dictators and politicians. They know some countries, some people, are better than others, better in every way (go here for additional information).

Normals take pride in doing their jobs well, in working hard for all too little salary. Even so, they give far more to charity than the self-imagined elite, and they give even more to individuals that need their help, money and kindness that never finds its way into statistical databases. They concentrate on their lives, their families; they mind their own business, never imagining them selves the stewards of others. They are polite, a hallmark of which means never thinking they know better than others how to spend their money, how to live their lives.

Just as they know some countries are better than others, they know some people are better than others—more moral, kinder, more caring, more generous, less judgmental. Even as elites ridicule them for their foolish and backward belief in God, they recognize the civilizing, humbling influence of faith. They thank the founding fathers for affirming the right to keep and bear arms because they know that right and its exercise frightens and deters the elite, and for those too arrogant or stupid to be deterred, will allow normals to preserve liberty.

When Mr. Trump gives the elite hell on Twitter, normals smile. They don’t see it as unpresidential; they see it as honesty, leadership and payback for all the years presidents, and the elite embraced our enemies and warred on normal Americans. They think “its about time.” They have a keen sense of proportion, and after eight years of Barack Obama idestroying the Constitution and disparaging America and Americans, a bit of harsh language aimed at our enemies and people that take advantage of us, foreign and domestic, isn’t a bug, but a feature, a feature they voted for when they elected Mr. Trump.

When the Media attacks Mr. Trump and every decent American ideal, normals don’t believe a word of it. When Democrats wail and proclaim an apocalypse brought on by allowing normal Americans to keep more of their own money, when elites of all stripes cry out in impotent rage, normals smile. Unlike elites, they don’t take visceral, sick pleasure in the misery of others, but they do delight in justice, and virtue signaling circling 180 degrees and biting progressives in the ass–ooo! I did it too!–is poetic justice indeed.

They know Donald Trump, or people like him. They know Mr. Trump has worked hard all his life. He’s comfortable with everyone, the elite and normals, people that work for a living. He’s comfortable on the construction site, in the boardroom, and among our military. He knows character isn’t measured by college degrees, titles, money or movie credits, just as normals do. That’s why they voted for him. And like him, they want our borders to be borders. They want immigrants to be producers, not takers, lovers of America, not haters of our country as the elites hate us all. They expect immigrants to be highly motivated to assimilate, to become Americans, not “citizens of the world.” They, like Mr. Trump, want to do away with chain migration, citizenship by birth and immigration by lottery.

Donald Trump called shithole countries shithole countries? He wants to import civilized, hard working, productive people from countries with cultures that produce such people? The elites, the Media, all the usual suspects are livid with rage, crying “racist”?

Oh, and spending a little time with my favorite bookworm on this topic will be rewarding.