I’ve occasionally written about cultural anthropologists that boldly venture out into the wilds of flyover country America, observing, and even interacting with the mysterious, unfathomable natives, most recently in NPR: Expedition Into The Unknown. Some hope to discover magic that can unify the country. Of course, such unification must be, without question, under progressive policies and rule, so they search, as all progressives do, for the right “messaging,” the correct way to spin their ideas to make them acceptable to non-believers. In other words, “how can we trick the rubes into voting for our latest messiah?”

In a lengthy, but worth reading article in The Atlantic, by Molly Ball, quaintly and stereotypically titled On Safari In Trump’s America, Ball undertakes a quest somewhat different than usual:

It was the hippies who drove Nancy Hale over the edge. She had spent three days listening respectfully to the real people of Middle America, and finally she couldn’t take it any longer.

She turned off the tape recorder and took several deep breaths, leaning back in the passenger seat of the rented GMC Yukon. The sun had just come out from behind a mass of clouds, casting a gleam on the rain-soaked parking lot in rural Wisconsin.

Hale, who is 65 and lives in San Francisco, is a career activist who got her start protesting nuclear plants and nuclear testing in the 1970s. In 2005, she was one of the founders of Third Way, a center-left think tank, and it was in that capacity that she and four colleagues had journeyed from both coasts to the town of Viroqua, Wisconsin, as part of a post-election listening tour. They had come on a well-meaning mission: to better understand their fellow Americans, whose political behavior in the last election had left them confused and distressed.

The trip was predicated on the optimistic notion that if Americans would only listen to each other, they would find more that united than divided them. This notion—the idea that, beyond our polarized politics, lies a middle, or third, path on which most can come together in agreement—is Third Way’s raison d’etre. It is premised on the idea that partisanship is bad, consensus is good, and that most Americans would like to meet in the middle.

As readers will discover, this Third Way is not actually non-partisan, but as usual, seeks consensus under progressive principles, though perhaps the kind of principles that were once the mainstream of the Democrat Party, but not for a long time. With a party so very far to the left—well into socialist/communist territory, and believing the only way forward is to go full communist—a “third way,” a sort of Clintonian center triangulation is still very far indeed to the Left. Notice the skewed perceptions of the Left:

We sped from town to town in the rented Yukon, watching the exotic Middle American landscape fly by. At one point, a gaggle of bikers roared past us on one side. On the other side of the road, a bright-green field dotted with hay bales passed by. Looking at the bales, Hale mused, ‘Don’t they look like shredded wheat?

Keep in mind, gentle readers, “the exotic Middle American landscape” about which Ball speaks is Wisconsin farm land. Bikers, hay bales, all exotic, unfamiliar, strange artifacts of a primitive, foreign culture, evoking surprise, and urban associations. Most Americans see hay bales as hay bales. Progressives apparently have only what they see in their breakfast cereal bowls for comparison.

This was not a cheap undertaking:

Third Way, for its part, announced in January it would spend $20 million on what it called the ‘New Blue’ campaign to ‘provide Democrats with a path out of the wilderness.’ Like many of their peers, the think tank’s brain trust had been stunned by the election. On November 9, too devastated to work, its staff had simply sat together and cried.

One might be forgiven for thinking Third Way’s intent was not so much mutual understanding and respect, but figuring out the messaging, how to restore the primacy and permanent rule of the Democrat Party. Any belief in Third Way’s even-handedness can be abandoned with Ball’s admission of a group sob session upon Hillary Clinton’s loss.

For all intents and purposes, it was Third Way’s vision that had been on the ballot in 2016—and lost. The think tank, inspired by the New Democrat centrism of the 1990s, had advised Hillary Clinton on her 2016 policy platform. In debates within the Democratic Party, Third Way advocated for the sensible center. It argued that a left-wing platform could not win elections, and that what voters preferred was a pragmatic, moderate, technocratic philosophy, socially liberal but pro-business and wary of big government. It used research and data to demonstrate that these policies made good politics.’

They advised the Clinton campaign, particularly on her platform, which was not at all ‘pragmatic, moderate…socially liberal but pro-business and wary of big government.’ A ‘sensible center’ for such people is obviously into socialist territory, or not far from it.

‘Open-mindedness was the sworn commitment of the Third Way team. The researchers were determined to approach rural Wisconsin with humility and respect. After the election, Hale told me, ‘You heard people saying, ‘These people aren’t smart enough to vote, they’re so stupid, if that’s what they want, they deserve what they get.’ That hit us, on every level, as wrong.’ They wanted to open their hearts and their minds and simply listen. They were certain that, in doing so, they would find what they believed was true: a bunch of reasonable, thoughtful, patriotic Americans. A nation of people who really wanted to get along.

As usual with cultural anthropologists, they may be well-intentioned, but are missing the point. The exotic Americans to which they listened want the government to leave them alone so they can live their lives. These are the people that are truly tolerant and helpful to others, not people convinced they alone know best how everyone should think and live. Imagine Ball’s—and Third Way’s– horror in hearing what such ‘thoughtful, patriotic Americans’ actually think:

You’ve got all these parasites making a living off the bureaucracy,’ the farmer declared, ‘like leeches pulling you down, bleeding you dry.’ We had been in the state for just a few hours, and already the researchers’ quest for mutual understanding seemed to be hitting a snag.

Others in the group, a bunch of proudly curmudgeonly older white men, identified other culprits. There were plenty of jobs, a local elected official and business owner said. But today’s young people were too lazy or drug-addled to do them.

These attitudes, which unquestionably reflect life for most of America, are, for Third Way, and Ball, evidence of “the other,” unfathomable, even deplorable natives that can never be brought into the fold of the elect.

As we proceeded to meetings with diverse groups of community representatives, this sort of blame-casting was a common refrain. Disdain for the young, in particular, was a constant, across demographic, socio-economic, and generational lines: Even young people complained about young people. ‘They don’t want to do the work, and they always feel like they’re being picked on,’ a recent graduate of a technical school in Chippewa Falls said of his fellow Millennials.

Given this fodder for the “listening” Third Way sought, why can’t they accept the possibility these people just might be right, that there are societal problems damaging America not directly related to political messaging? This is not “blame-casting,” but frankly identifying problems damaging to America. Third Way and such people, steeped in identity politics, tribalism and victimology cannot accept that individual actions might be destructive. Even Ball—The Atlantic is anything but conservative–understood how disingenuous Third Way preconceptions are:

We are a think tank that deals with what the plurality of Americans are thinking about—in other words, we don’t spend a lot of time on the ideological edges,’ one of the two would explain. ‘It has started seeming like the far left and the far right were the only voice in America, but we know that’s not true. We focus on the 70 percent in the middle, because we think most of us, as Americans, are there.’

This was slightly disingenuous. Third Way, while not officially affiliated with a party, is an organization with a policy agenda, from gun control to entitlement reform, that it seeks to advance within the Democratic Party and with the broader public. Most of its funding comes from corporations and financial executives. Critics on the left call the group the Wall Street wing of the Democratic Party, and accuse it of advancing its donors’ interests over the greater political good. Third Way has called for cutting Social Security and Medicare and vehemently attacked the soak-the-rich economic populism of Elizabeth Warren and Bernie Sanders. Voters, it claims, are not interested in a party that’s all about big government and tax-and-spend.

In that, Third Way is right, but there is reason to believe their rhetoric does not match its political leanings or practices. Ball comments on Third Way’s report resulting from the expedition to deepest, darkest Wisconsin:

The report surprised me when I read it. Despite the great variety of views the researchers and I had heard on our tour, the report had somehow reached the conclusion that Wisconsinites wanted consensus, moderation, and pragmatism—just like Third Way. We had heard people blame each other for their own difficulties, take refuge in tribalism, and appeal to extremes. But the report mentioned little of that. Instead it described the prevailing attitude as ‘an intense work ethic that binds the community together and helps it adapt to change.

Obviously, they weren’t actually listening, but filtering what they heard through Leftist orthodoxy. They are not nearly as dismissive of and insulting toward normal Americans as many leftists, but still aren’t able to see the reality of America. People expressing annoyance at welfare parasites don’t want to see such people starve, nor are they engaging in tribalism or appealing to extremes. They see unnecessary government expenditure as destructive, making people dependent rather than productive, and merely chose that example to make the point.

What unites Americans is Constitutionalism, based in the Constitution, the rule of law, equal justice under law, hard work, self-reliance, honesty, reliability, actual tolerance, a belief in second chances and redemption, self sacrifice and delayed gratification, all of the virtues, which in our modern world have become elsewhere foreign, but even more uniquely American. Flyover country Americans can’t be convinced to abandon those values with messaging, with slick, empty rhetoric, with promises those delivering them know are lies as they speak the words. 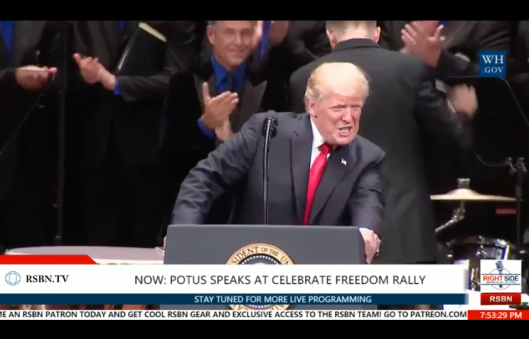 Normal Americans take people as they come, and judge them by the content of their character, by deeds—over time—and not by rhetoric. They believe in merit, and expect to succeed or fail on just that. Above all, they believe in personal responsibility. That’s why they so disdain unnecessary, destructive governmental entitlements that trap generations in poverty and dependence. That’s why they so appreciate Donald Trump, as raw and occasionally intemperate as he is.

They want a government only large enough to handle the few things they can’t do for themselves, a government that stays strictly within its constitutional limits. They want, beyond this, only to be left alone.

That’s why there cannot be unity between progressives and conservatives. Progressives exist to create utopia, a utopia that can exist if only their policies become law and everyone is forced, not only to obey them, but to give appropriate lip service. They are incapable of leaving others alone, for they seek to perfect them, by trickery—messaging—if possible, but by force, if necessary, for their own good.

Strangely enough, normal Americans that can primarily be found on safari in such wildernesses as Wisconsin, resent this and know utopia on Earth is impossible.

12 thoughts on “The Third Way On Safari In Wisconsin”