As all sufficiently advanced beings know, progressives are intellectually and morally superior, inhabiting a higher plane of existence than the benighted denizens of flyover country. The temptations, hatreds, racism, sexism–add favorite ism here–prejudices and character flaws so prevalent outside the beltway and coasts do not infect the exalted, who are, to a man, woman, and whatever is currently in vogue, incapable of such base emotions and thoughts. The gap in humanity is even greater between progressives and those that work in the Trump Administration, as Fox New illustrates:

Horsey originally wrote Wednesday that Sanders ‘does not look like the kind of woman’ that President Donald Trump would chose for the high-profile role, assuming he would prefer ‘sleek beauties with long legs and stiletto heels’ who could pass for ‘arm candy’ in addition to serving as the White House’s top spokesperson.

The Times’ two-time Pulitzer Prize-winning editorial cartoonist and columnist went on to mention that first daughter Ivanka Trump and first lady Melania Trump are closer to the ‘Barbie dolls in short, tight skirts’ that he envisions Trump preferring at the press briefing podium on a regular basis.

We must, of course, take Horsey at his word because he’s obviously one of the morally superior elite–a journalist at the Los Angeles Times!–and would never engage in what appear to be crude, ugly, juvenile insults. He’s not capable of doing that because he’s one of the morally superior elite, and what seems to deplorables to be crude, ugly, juvenile insults are actually wise and insightful truths of progressivism, which is always wise and insightful, because Trump.

And who is this Sarah Sanders, besides being the daughter of former Arkansas Governor and Republican presidential candidate Mike Huckabee?

Horsey has been insulting Sanders for some time…

Back in 2010, well before landing a job in Trump’s White House, Time named her one of its “40 under 40,” a group of young civic leaders that the magazine considered ‘rising stars of American politics.’

That did not deter Horsey, who was no doubt merely revved up by the mere thought of anyone working for Donald Trump being an accomplished, decent human being:

However, the Times columnist went on to call Sanders a liar, a ‘failure’ and a ‘pro’ at being ignorant.

Not everyone, however, has imbibed the progressive Kool Aid, and when Horsey–and probably his bosses–sensed the heat was on:

Shortly after Fox News asked for comment, the Times removed all references to Sanders’ appearance and added a note from Horsey.

‘I want to apologize to Times readers – and to Sarah Huckabee Sanders — for a description that was insensitive and failed to meet the standards of our newspaper. It also failed to meet the expectations I have for myself. It surely won’t be my last mistake, but this particular error will be scrupulously avoided in my future commentaries. I’ve removed the offending description,’ he wrote. 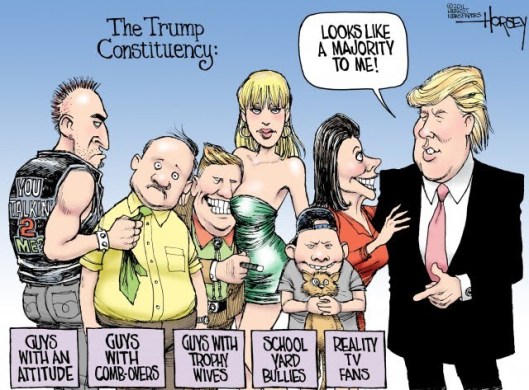 Horsey’s view of half of America…

Notice Horsey’s nudge nudge, wink wink to “Times readers,” most of whom were almost certainly delighted with his crude, unmanly attack on Sanders. His non-apology apology, delivered first and foremost to fellow progressives rather than the target of his crudity demonstrates how insincere he is. He’s sorry, if at all, he got caught and wasn’t universally lauded for his rhetorical brilliance. He deigned to waste only a single phrase on Sanders, not so much as a simple sentence. One might also reasonably believe he did not, in fact, fail to meet the standards of The Los Angeles Times, a former newspaper and current propaganda arm of the Democrat Party, The Resistance and the Progressive Movement.

Oh, but he said he didn’t meet his expectations. Surely that’s sincere? Horsey is a journalist with substantial experience–a Pulitzer Prize winner–and a political cartoonist to boot. How could he fail to understand exactly what he was doing? Are we to believe he was so incensed by Ms. Sander’s lack of model svelteness he forgot all journalistic standards? And how do we reconcile this with progressive’s revulsion at the very thought of Melania Trump, a woman with svelteness to spare? Is it possible progressives hate all women not slavishly devoted to progressivism regardless of their figures?

And what of basic human decency? There was a time when a man verbally–and particularly publically–attacking a woman as Horsey did, a woman who did not in any way provoke the attack, or cause Horsey harm, would pay a substantial price, a price delivered by the scorn of other men, for his cruelty and lack of masculine rectitude. Men–real men–don’t do that. Progressives would consider that sort of chivalry toxic masculinity. Real men consider it an essential element of manhood. They consider it essential manners. They consider it a marker of civilization. At the very least, their mothers would make them feel their withering scorn for such lack of manners, unless of course one’s mother is a progressive.

But no. Horsey won’t make this particular error in future commentary–we know because he said so–an error he does not stoop to clearly identify. But that’s just fine, because he’s morally and intellectually elite, evolved, and oh so ethical. Besides, there is a Republican “War on Women…”  Uh-oh.  One also suspects his promise not to make the same mistake will not last, and for the reason that eternally inflames progressives, for the reason they are, for the time being, perpetually aggrieved. Because Trump, and anyone associated with him, deplorables all.

2 thoughts on “David Horsey: The Sincerity Of Progressive Apologies”