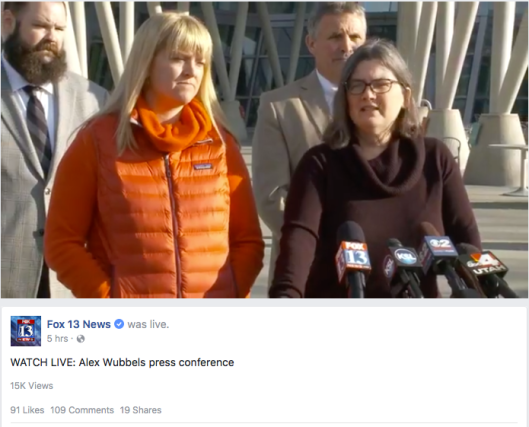 As regular readers know, I’ve been forecasting either a substantial settlement or a lawsuit in the Wubbels case, as I noted in Bloodletting 5:

Expect resolution from the SLCPD side of this case sooner rather than later. I also expect Salt Lake City to come to a substantial, and undisclosed, settlement with Alex Wubbels sooner rather than later. In fact, I’d be surprised if those negotiations are not already underway. The City has essentially rolled over on its back, exposing its belly and begged Wubbels not to hurt it too badly.

The Bloodletting case archive is here.  It appears I was correct on both counts:

University Hospital nurse Alex Wubbels has agreed to a $500,000 payment to settle a dispute over her arrest by a Salt Lake City police officer after she barred him from drawing blood from an unconscious patient, her attorney said Tuesday.

Attorney Karra Porter said at a news conference that the agreement with Salt Lake City and the University of Utah covers all parties and takes the possibility of legal action off the table. ‘There will be no lawsuit,’ she said.

This is a relatively low, but not unjust, amount. I suspect Wubbels was willing to settle for this because she is not trying to cash in on this situation, but recognizes government is normally motivated to change only upon the infliction of at least some pain.

Police Chief Mike Brown fired [Jeff] Payne on Oct. 10 and demoted [James] Tracy to the rank of officer. Both men have appealed the punishment to the Salt Lake City Civil Service Commission.

Wubbels said Tuesday she hopes the disciplinary measures are upheld. ‘I will be very disappointed if they aren’t, she said.

As I’ve also noted, Tracy’s demotion may be modified to at least some degree, though Payne’s termination may not. KSL.com adds detail:

…Alex Wubbels announced Tuesday afternoon [10-31-17] that she will use part of that money to launch a new initiative to make body camera video more accessible to all residents in Utah involved in a police incident.

‘I am not in the business of setting anyone up for failure. I want us to be successful in moving forward. And I think this is a small step we can provide to enable that potential success if we are going to start asking the police departments to have body cameras,’ Wubbels said outside the Salt Lake City Police Department while standing next to her attorney, Karra Porter.

‘We all deserve to know the truth. And the truth comes when you see the actual raw footage. And that’s what happened in my case. No matter how truthful I was in telling my story, it was nothing compared to what people saw and the visceral reaction people experienced when watching the footage,’ she said.

It’s not certain how the $500,000 dollars will be disbursed. Attorneys normally take 1/3 of settlements, and I’m not finding any particular information about that. Will Wubbels net the full amount with Porter also being paid a full third?

Matthew Rojas, spokesman for Salt Lake Mayor Jackie Biskupski, said both the city and the university agreed to pay $250,000 each.

‘Salt Lake City has been focused first and foremost on ensuring policies and procedures are changed so things like this don’t happen again, and we are glad we could come to a resolution with nurse Wubbles,’ he said.

Since Wubbels went public with the arrest video, Porter said her client has had several goals, including changes to policy on how police interact with nurses; accountability by the officers involved; starting a public discussion on the importance of body camera video; compensation; and helping others.

Wubbels is working with the American Nurses Association on a campaign to prevent what happened to her from happening elsewhere. She also would like to speak before the Utah Legislature during the next session about the importance of making body cameras mandatory for all police agencies. And she and Porter want to help all Utahns have access to body camera video for their own cases.

‘Thanks to Alex, there will be more transparency as body cam footage becomes more readily available in Utah,’ Porter said.

A press conference Video with Porter and Wubbels is available here.

Throughout this process, Alex Wubbels has remained, for the most part, prudently silent, and has not, as is common in such cases, shown herself to be a blindly partisan, money grubbing opportunist. She appears genuinely concerned about necessary change and is unlikely to find herself on Dancing With The Stars.

The aftermath of the case, however, is far from played out. The appeals of Payne and Tracy will be heard in the near future, and a criminal investigation, local and federal, is ongoing. As I’ve previously noted, charges are—or should be—unlikely. Payne, and to a lesser degree, Tracy, made mistakes, but no one died, and every issue either has been successfully addressed, or will be addressed in short order. In the universe of police mistakes, this is not in the top ten. Payne was indeed badge heavy, and acted in anger, but may not be seen to have been overtly malicious, and has paid a significant price for his error, losing the entirety of his employment and becoming a social pariah, perhaps unemployable in emergency medicine and police work. That may be enough.

I’ll have more on the upcoming appeals by Payne and Tracy next week.