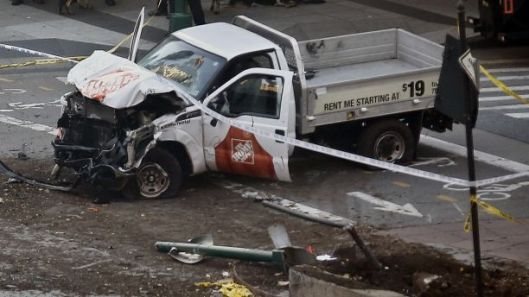 By now, most Americans are aware of the attack on 10-31-17 in New York City that left eight dead and 11 injured. An Uzbek Muslim immigrant rented a Home Depot truck in New Jersey and drove for, by some accounts, more than a mile, on a bike path in lower Manhattan, running down the victims, finally stopping only when he crashed the truck into a school bus, injuring two special needs children and two adults. An NYPD officer shot the terrorist, who would very much want his name to be mentioned here, in the leg. He is undergoing treatment and is reportedly “gleeful” about his act of wanton savagery and evil.

That terrorists want to commit such acts of barbarity against Americans on American soil is nothing new. This, however, is new, though also not unexpected:

The alleged ISIS fanatic authorities say was behind Tuesday’s deadly New York City slaughter came to the United States seven years ago from Uzbekistan under the Diversity Visa Program, details of [the killer’s] travel to America that could become all the more important as President Trump proposes revisions to his “extreme vetting” program.

The Diversity Visa Program, a State Department program which offers a lottery for people from countries with few immigrants in America, drew the ire of Trump early Wednesday morning. [skip]

The DV program makes up to 50,000 immigrant visas available annually, ‘drawn from random selection among all entries to individuals who are from countries with low rates of immigration’ to the U.S., according to the U.S. Citizen and Immigration Services website. Applicants must prove they have a clean criminal record, have a high school diploma or its equivalent, or have at least two years of work experience within the past five years in order to qualify.

Hmmm. Could there be any particular reasons some countries have low rates of immigration to the U.S.? Perhaps the residents of some of those countries are poor choices to admit to America? Something to think about. Who could possibly have thought that sort of immigration policy a good idea? Who could be that venal, cynical and stupid? Oh. Right:

The program originated as part of a bill introduced in 1990 by Sen. Chuck Schumer, D-N.Y., then a member of the House. Schumer’s measure to make a set number of visas available to ‘diversity immigrants’ from certain countries was absorbed into a larger House immigration bill, which was sponsored by Schumer and 31 others, including several Republicans.

Diversity, inclusion, intersectionality, social justice, all kill. And in this case, the execrable Chuck Schumer (D. NY) is directly responsible. You can’t say he’s responsible! I just did. Of course, the person ultimately responsible is the jihadist loser, but he’s not alone. A good number of his—and Schumer’s–America hating, preening, smugly arrogant Democrat colleagues/Islamist apologists were also involved. As this is being written, Schumer and his spokesslugs have had nothing to say about this, save the tweet above, which is unusual for Schumer, renowned in Congress as a publicity whore. “The most dangerous place to be in DC is between Chuck Schumer and a TV camera,” the infamous aphorism goes. No doubt he and his bottom dwelling minions are trying to figure out the proper messaging. How can they blame it on Donald Trump and normal Americans? How can they properly lecture us on not blaming Islam and Islamists?

It should be noted Schumer immediately pimped for gun control after the recent Las Vegas attack, arguing for the same tired Democrat narratives that would not, for a moment, hampered the Las Vegas killer or any other. Pointing out the legislation, and legislators, that made the New York attack possible is hardly politicization, but stating facts pertinent to preventing future attacks. It is the Democrat Prime Directive to politicize everything, particularly if Republicans are responsible for a policy or law that has somehow gone wrong, and if they’re not, Democrats make something up, as they’re currently doing with any attempt to replace the rapidly crumbling Obamacare, an entirely democrat invention. They have no room to accuse anyone of anything.

You’re a racist and nativist! How can you deny diversity? I wish to deny terrorists, people that hate America and Americans, criminals, degenerates, and people who will not only not contribute to our society, but will attach themselves to tax dollars like parasites, entry to America. I wish to ensure that only people that are willing to fully assimilate and embrace America are allowed to enter our nation. I want to ensure everyone entering America will be a net asset, not a life-long drag on the nation. I wish to ensure immigration law benefits Americans, not those that want to kill us and their Congressional enablers and fellow travelers. I want to ensure honest immigrants and visitors are able to enjoy America and leave alive: 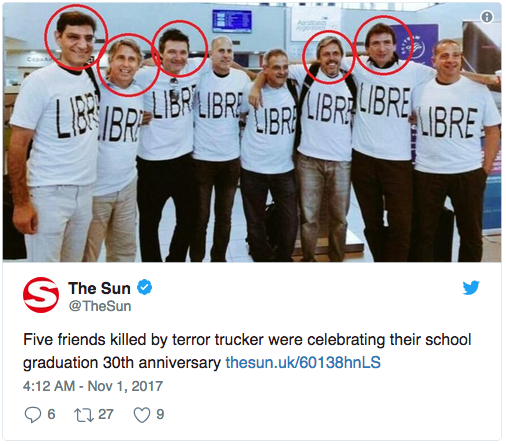 Aril Erlij was so excited for his friends to celebrate their 30th high school graduation anniversary together that he reportedly paid out of his own pocket for two of them to make the flight from Argentina to New York City, where, on a brisk, bright Halloween afternoon the former classmates decided to stroll through the Big Apple’s west side.

But the reunion turned from joyful to dreadful when a suspected ISIS militant careened down one of the city’s bike paths in a rented pickup truck, plowing into city dwellers and tourists alike — killing five of the Argentinian men.

The five were identified as Aril Erlij, Hernan Diego Mendoza, Diego Enrique Angelini, Alejandro Damian Pagnucco, and Hernan Ferruchi. They were among eight total fatalities of the attack near the World Trade Center.

‘Four died at the scene and another young man died when he was taken away by an ambulance,’ Jose Nunez, a national deputy who was a friend of several of the men, told Argentina’s La Nacion newspaper.

Progressive policies, lauded in the highest, self-righteously morally indignant terms, kill. You’re islamophobic! Islam is the religion of peace! You don’t know the killer was Muslim, and this wasn’t linked to Islam! Well, he did scream “Allahu Akbar,” after ramming the school bus. He did leave behind a number of letters, written in Arabic, spouting jihadist nonsense, including fealty to ISIS. He is Muslim, and he frequented a radical Mosque under surveillance by the FBI. As Americans heal his wounds, he gloats about the carnage he caused in the name of Allah. I know I’m just a deplorable God and gun clinger, but that sounds pretty convincing to me. It sounds convincing to the indispensable Michelle Malkin too:

With blood still fresh on the pavement in Manhattan after Tuesday’s outbreak of Allahu Akbar-itis that took at least eight innocent lives, Palestinian-American propagandist and Hamas cheerleader Linda Sarsour tweeted:

‘Every believing Muslim says Allahu Akbar every day during prayers. We cannot criminalize ‘Allah is great.’

And confused former director of national intelligence James Clapper mused: ‘It’s hard to comprehend…what moves a human being to do that to another human being.

Aren’t you glad, gentle readers, Clapper no longer has anything to do with keeping us safe? Actually, he obviously never had anything to do with keeping us safe, just like his boss, Barack Obama. Jake Tapper of CNN said Allahu Akbar is said “under the most beautiful of circumstances.”  And no one is criminalizing “Allahu Akbar;” rational people merely recognize when someone is shouting that in public, it’s time to draw and put whoever is screaming it in their sights. Which brings us to our lessons for today, gentle readers.

Various pundits have observed we cannot prevent this sort of attack. They’re right. But unlike the unarmed citizens of New York City, denied their right to self-defense, we can ensure that more and more Americans are not only armed, but properly trained. We can’t intercept many attacks of this type before they occur, but we can stop them as quickly and finally as possible thereafter. We can encourage Americans to get their faces out of their smart phones—which make us dumb indeed—and learn situational awareness. 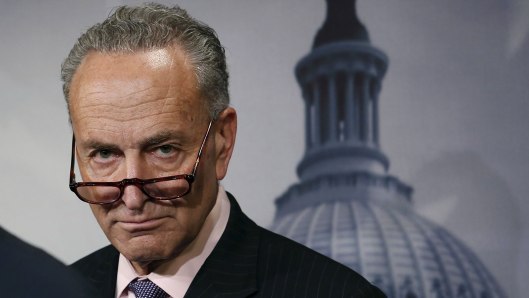 Of course, the likes of Chuck Schumer (go here to discover the nature of his character, and here too) virulently oppose the self-defense rights of Americans even as they invent non-existent immigration rights for those that would kill us. Those innocent Americans and Argentinians, reduced to running and hiding while hoping a police officer might eventually come along and do something might agree—about being armed and prepared, and about Chuck Schumer and his sycophants.

The killer must be immediately sent to Guantanamo, tried by military tribunal, and if found guilty, executed. No civilian show trials. No radical leftist lawyers spreading Islamist propaganda. No sympathetic, Trump-atttacking coverage on CNN and MSNBC. We are engaged in a war, a war that will continue until Muslims reform their faith and deal with Islamists around the globe, or until we kill every Islamist, Islamist apologist, and Islamist government, and salt the Earth we leave behind. If we don’t, they will continue to kill us, yelling “allahu akbar” every time, taking advantage of useful idiots like Chuck Schumer.

When their smug disdain and hatred for honest, law-abiding Americans becomes our politics, jihadists admitted to America under diversity visas murder innocents. Henceforth, Chuck Schumer should be treated like the corrupt, despicable anti-American cockroach he is, and reviled by honest people everywhere, as should everyone supporting him. It’s time to get serious. It’s time to rally under the flag and perpetually shame and shun every social justice idiot dishonoring it. It’s time for all of us to be Americans.

And don’t get me started on the media.